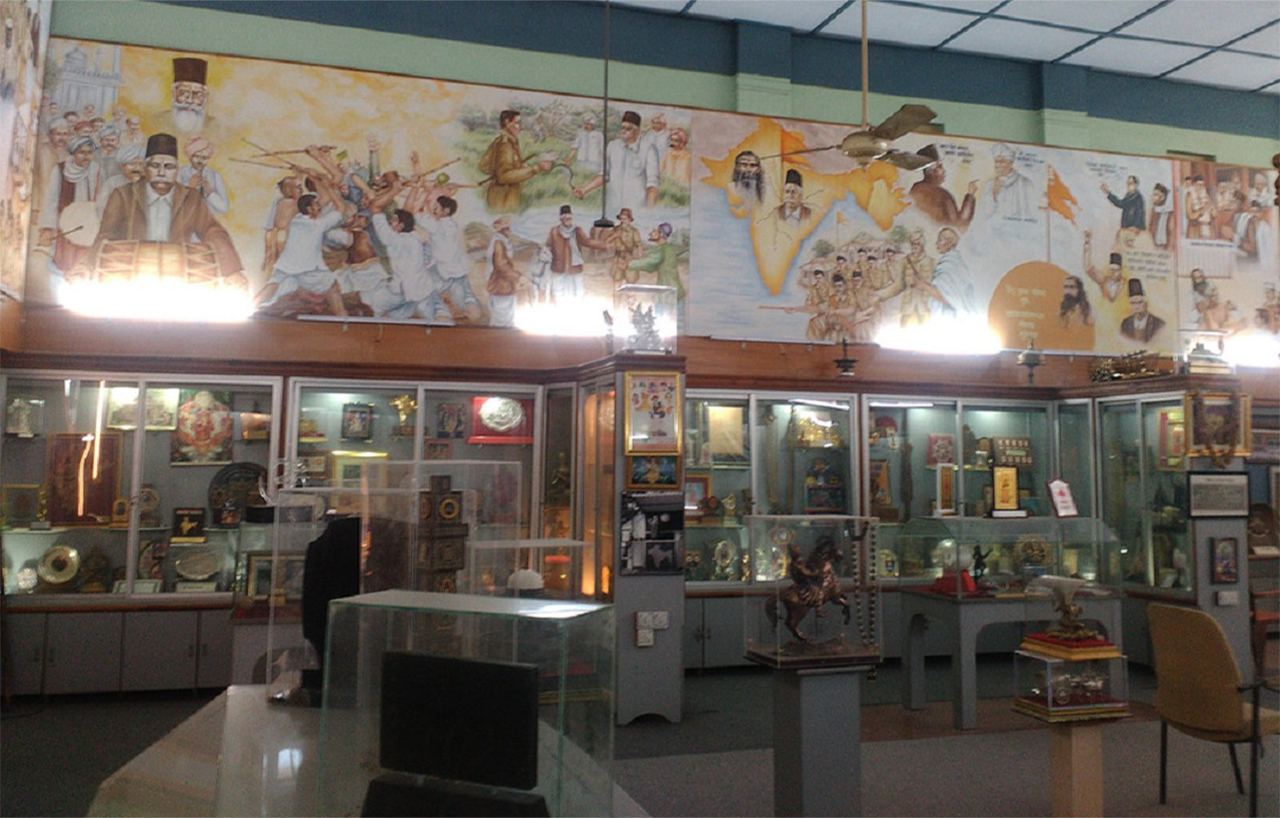 In January 2020, a two member team from Aamra (a study group on Conflict and Coexistence), visited the RSS headquarters at Nagpur. This part of the report on the visit is about their experience and interaction with the guide, at the Hedgewar museum located inside the headquarters.

It was some day in the month of January in 2020, at around 11am. What we encountered first was what we call the three-tier security. However, we did not realize at first that apart from the government security forces, also present were additional private security personnel. When we were in front of the second turn, the gate could be seen directly ahead. The head office of the Rashtriya Swayamsevak Sangh or RSS can be seen. We were made to stand long before the gate. Two paramilitary personnel said we can’t go inside. They wanted to know why we had come here. We said we would visit the library, and would go to the museum. ‘But the library will open at 4 pm’, we were told. We requested that we be allowed to talk a little with the office, that we have come from far away and so on. Office means the office of the security forces in front of the gate. There were metal detectors, scanners, cameras and other equipment there. The same question is asked there. This time we said that we want to go to the library and museum as part of a research work. The female officer in charge, an Adivasi woman (can’t reveal her name), wanted to know our identity, asked us to show our Aadhaar card. This time we were a little confused, the second person in our two-member team was from a religious minority with an Arabic name. We both hurried to show our Aadhar cards. While showing the cards, another security officer appeared, a Marathi Brahmin, and he said in a hoarse voice, if the purpose of the visit is research then why are we carrying a camera with us? We told them that we are new to Nagpur, and we’re out to see various places in the city. This time he said in a relatively polite voice, ‘go inside after depositing the camera’. We said, ‘No objection, we will leave the expensive camera in your care, but the responsibility is yours’. He said, ‘OK, take it along, but don’t open the camera inside, we’re keeping an eye on everything’. We knew we were under watch on CCTV from the Main Road, so without any further talk we started to proceed but were asked by the female officer to submit a copy of our identity card and sign on an entry register book. By this time, a group of youths came here, a phone came from inside to allow the group into the office. All the security officers seemed to become a little too busy, and the rest of the formalities (like registration for entry, identity card viewing, etc.) were hurried through quickly. We entered inside and appeared in front of a garden.

A few people with saffron scarves around their necks stopped us there, ‘the library is closed now, where do we want to go?’ they enquired.

Aamra : Our train is in the evening, we have to return today. We have come so close, so we want to go to the museum and see Doctorji’s memorable collection once.

They: Who are you?

Aamra: Came to Nagpur for a program. We were very eager to come here, have heard that in the library there is an option to buy books.

They: Then come in the afternoon. But what’s your identity?

Aamra: Have submitted it at the security office. (took the name of the adivasi woman officer). She also said the library will open in the afternoon. Your garden is very beautiful.

They:  Yes, it is well maintained. Where are you coming from?

Aamra: Have heard that Krishna Matlogji is here, he has been there for a long time, we are coming from Kolkata.

They: Oh well (Glancing at us from head to toe for a few seconds). Go, the museum is on the left, a little ahead.

We had thought our Kolkata origin would be a hurdle but in this case our trick worked and access to the museum turned out to be a bit easy. Anyway we moved ahead towards the museum. Behind us, the youth-group, as usual, were now facing the saffron scarfed persons. (Later we realized that they did not have to face interrogation like us, and it was natural.)

A middle-aged gentleman was sitting at the reception of the museum. ‘Library is closed now – our purpose is to visit the memorial building of Doctorji’, we said. Just then we saw that the group of youths (They were state committee members of the Bajrang Dal from Andhra Pradesh) arrived and proceeded directly to the museum on the third floor. We also followed them.

It is not the purpose of this article to list what is in the museum. The museum is a place of interest or knowledge to the followers of Hindutva. The museum has a huge collection of various memorabilia, photographs and paintings, used items, and symbols of various ‘achievements’ of Dr. Hedgewar in his life. It may be of interest to researchers as well as his followers. To his followers, of course, the place is no less sacred than Kashi or Kaba. As to the members of this Bajrang Dal. The guide / curator of the museum was quite knowledgeable about Hedgewar, he was standing in front of various memorabilia and describing them in detail. We were listening, taking notes. Clicking pictures even with a mobile camera was not allowed.

But when we saw a picture, our eyes got stuck at it! In the picture, a group of people were beating someone, there are blood marks on the body of the person being thrashed. As we went a little closer, we noticed, the man being beaten up in the picture was a Muslim. We asked the guide, what is the history of this particular picture?

Guide: This is a scene from Doctorji’s battle to save Gomata.

Aamr: A battle! With whom?

Guide: (Looking into our eyes) With whom! With the Muslims.

Aamra: (like a curious student) Will you explain it in a little more detail?

Guide: Doctorji was going for Water Satyagraha. On the way, he saw a group of Muslims, taking a cow to be slaughtered. The doctor asked, where are you taking the cow? The answer was — to slaughter. He immediately protested, wanting to buy the cow by paying its price. But the scoundrels did not agree. Then they (the Muslims) were thrashed.

Aamra: Daktaraji himself beat them?

Guide– Why just he, the swayamsevaks of the Sangh were present, they too.

Aamra– Their bloodied body means they were beaten up but could not retaliate?

Guide– Before Daktaraji’s personality, even tigers become cows. But chance those Muslims had!

During this conversation, the youths from Bajrang Dal became very excited and their awe and pride for Doctorji was visible. We were literally speechless,, even though Hegdewar’s biography mentions this incident, it was out of our thoughts that the incident could be in the collection and displayed publicly. We continued our conversation with the guide, without expressing our anger and disgust).

Aamra– There are so many pictures here, there are also gift items received by Doctorji from different places and organizations. But this painting is different?

Guide: Yes, he awakened the Hindu heroism. His dream was to make India a Hindu Rashtra. This painting teaches us what needs to be done.

Aamra– You mean this painting is a source of inspiration for Hindus to what is being done now all over the country to save Gomata (cow mother)’?

Aamra– Shouldn’t the prints of this painting be spread?

Guide– No. There is instruction, no picture of this painting can be taken.

A member from the Bajrang Dal group standing beside remarked ‘there are secular laws in the country. What can be done!’ In other words, if the country becomes a Hindu Rashtra, all this can be done, we asked them in a soft voice. The group moved forward with a smile of consent. At this point two of us split up, one following the guide and conversing with the group, keeping them engaged by asking a variety of questions in front of the pictures of Hedgewar’s Kolkata episode. Another of us clicked a few pictures of the painting in defiance of the ‘rules’ of the RSS headquarter, and immediately shared them on WhatsApp group of Aamra. Needless to say, there was a possibility of our mobiles being snatched and forcible deletion of the pictures. We felt it was our humanitarian duty to take pictures of the painting and expose this heinous incident of glorification of the bravery (by lynching innocent Muslims) of the founder of the RSS.

It needs to be noted that there is a history behind the painting, which was mentioned by the guide. One such incident is mentioned in his biography, Hedgewar Jeevan Charit (pp. 193-194), by Narayan Hari Palakar. Although it does not talk about the lynching of Muslims, the biography mentions Hedgewar’s involvement in a ‘Jungle Satyagraha’. While going there, an incident with Push in the biography is worth mentioning here.

As the doctor sahib (Dr Hedgewar) was returning from the river in the morning after finishing his toilet, he saw two Muslims carrying a well-built young cow. The doctor asked them, ‘Where are you taking the cow?’ They answer, “not taking it anywhere. We will sacrifice it here after a while.’ The doctor was furious, he asked the price of the cow. They replied, ‘bought it for twelve rupees, but it is our butcher’s business, so we will not sell it.’ Hedgewar was stubborn and the butchers didn’t want to sell the cow. Hedgewar continued to threaten them, holding the cow-rope firmly in his hand. The butchers argue, ‘It is customary to slaughter cows here, you better leave us alone’. One of them tried to reason with him, ‘You have come here for Jungle Satyagraha, why are you getting into such trivial things?’ Hedgewar growled, ‘Is it trivial or useless to protect the revered cow of the Hindus? To me Jungle Satyagraha or Satyagraha for the cow is equal ‘. The Shyamsevaks accompanying Hedgeware became more aggressive. A police officer came and tried to pacify both the two groups, threatening to arrest them. Eventually the Muslim butchers refrained from sacrificing the cow. Hedgewar bought the cow and gifted it to a local cow protection organisation.

We then requested the same guide to help us meet Sri Krishna Matlog, we told him how it was important for our ‘research’ work. The guide said it was not possible. We kept mentioning our research work and requested him again and again. The Bajrang Dal group has already left. At last the guide phoned someone, seeking permission for our meeting. We waited. After about 15 minutes we were informed that permission has been granted to us to meet and talk with Sri Krishna Matlog. We were allotted a short time, and we have to talk to him in the presence of others. We immediately agreed.