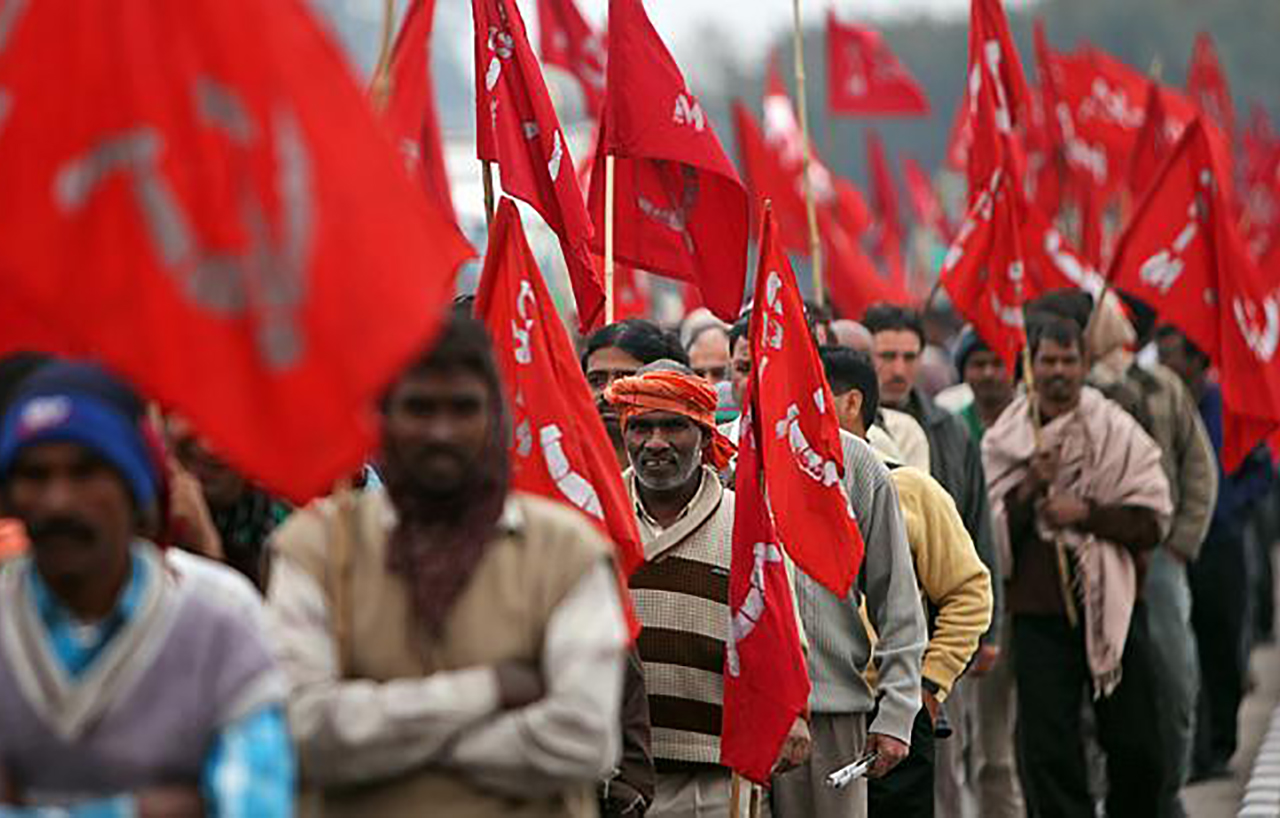 A working class struggle that was not : The ritual of annual national strikes

All central trade unions, barring BMS, went on a national strike on 26th November 2020. The strike was labeled as historic, with a massive participation of the working peoples. But will such annual strikes in the absence of real struggle at sites of production and trade unionism rooted in economism have any effect on the state and capital’s multi-fronted attack on the working class? Asks Amit Jugnu.

It is claimed that the old craft unions can no longer serve the revolution, that industrial unions are the highest and most perfect thing. That is a completely metaphysical position. It has already been proved in practice that reactionary industrialism is possible. If the workers organise themselves in industrial unions in order to reach agreements with the capitalists, then there is nothing revolutionary in that, while it is on the other hand possible that trade union organizations that are even more backward than the craft trades unions will unite in revolutionary struggles if they are filled by revolutionary spirit. — Lenin (Left Wing Communism: An Infantile Disorder)

All central trade unions, barring Bharatiya Mazdoor Sangh (BMS), went on a national strike on 26th November 2020. The unions claimed the strike as historic and that at least twenty six crore workers participated in it on that day. Yes, these are monstrous numbers. If over a quarter of a working population have gone on a strike, then we should expect the entire country to come to standstill and the governments and capitalists to feel the tremors. But have they? If the history of the last three decades (post liberalisation of Indian economy in early 90’s) of national strikes (in each of which, workers participation have been steadily rising) is anything to go by, we know the answer to this question. So the question naturally arises how effective have these national strikes been, ritualistically called every year by the central trade unions in resisting the neoliberal attacks on the working class?

The decision to go on strike on 26th November was taken in a virtual convention held on 2nd October, by the central trade unions and their affiliate organizations. The convention came out with the following declaration:

The Convention calls upon all the working people, whether unionized or not, affiliated or independent, whether from organized sector or unorganized sector, to intensify the united struggle against the anti-people, anti-worker, anti-farmer and anti-national policies of the government and make the call for a countrywide general strike on 26th November 2020 a total success.

Like all previous declarations leading to the one day national strikes (which make for some back page news and result in nothing more), this declaration sounds as hollow as the practice of the ritualistic annual strikes itself. Moreover it is ambiguous. What does “intensifying” a struggle by “all working people” (including the ones who are not organised!) mean in practice?

First and foremost, intensification of struggle is a phase that necessarily follows relentless organizing of workers that arises out of an existing struggle at the site of actual production. There is nothing to intensify when a struggle does not even exist there. Does anyone in his/her right mind claim that in India all strata of workers are engaged in a protracted struggle against anti-worker policies of the state and capital’s repression? Is this the reality on the ground when one after another attack, both at the macro policy level and at the workplaces, is going on without any effective resistance by the trade unions?

Secondly, the call “to make the strike a total success” is similarly ambiguous. How is ‘success’ of a strike measured? But this, too, is something we have seen in the past. A decade back, when the left was in power in West Bengal, such a strike meant a total complete shutdown of all activities in the entire state. Does it mean a vibrant workers’ movement at that time in West Bengal? Success and strengthening of the workers’ struggle or trade union movement is measured by the leaders of the central trade unions in numbers just as the capitalist measures economic growth of a country in GDP numbers. To the trade unions, the number of people who participate in such strikes has become the only measuring rod of its success or failure. Nothing else matters.

In fact, “participation”, too, remains an ambiguous term within such a “liberalization” of working class politics. While we were told that 250 millions workers participated in the strike, no figure was mentioned about how many permanent workers in the organized sector, both public and private, took part in the strike. The employees of the largest public sector bank — State Bank of India— didn’t go for the strike but only extended support and solidarity. It was the same case in Railways, one of the largest employers in India and a lifeline to the entire country. Railways is under threat of privatization and massive retrenchment of workforce. Their decision can’t be brushed aside simply by saying that the unions there are under the control of opportunist leadership. We need to honestly assess how much production was halted in the organized private sectors like automobiles, telecoms, power, cement, mining etc. in the industrial belts of the country. The unions need to introspect why the permanent employees and workers are lukewarm to any struggle against the labour codes recently made into laws by the ruling party.

How many permanent workers, for example, in the Maruti plant in Manesar, and in that industrial belt extending from Haryana to Rajasthan, which has many independent left trade unions operating, went on strike. The participation was massive from mainly the unorganized, informal sector workers. The mode or level of workers participation, or the level of political awareness either about the state policies or capital’s repressive mechanisms, or the class consciousness that the worker is bringing towards what the strike as a political weapon to impact production and capital, matters, but seemingly not to the central trade unions leadership. As we have witnessed several times, most of the protest gatherings by unions and organizations are held at government designated protest places, far away from sites of production, where they cause least inconvenience to the owners of capital and the state. For example, the central trade union leaders in Delhi have requested the workers to gather at Jantar Mantar (not at the factory gates). To call such a strike a success is nothing but deceiving the working masses.

The core question is, will such annual strikes in the absence of real struggle at sites of production have any effect on the government’s multi-fronted attack on the working class? If recent history of single day national strikes are anything to go by, the answer is clearly no. Central trade unions in India have been declaring annual national strikes ever since the era of liberalization began. The current strike is perhaps the twentieth one (or two) day national strike we are witnessing in the country. But if we begin to assess the cumulative impact of these national strikes, we only find one answer. And that is, to deceive a worker to believe that the trade union movement still fights for his/her interests beyond the narrowest of the narrow legal and economic confines. Within these confines, trade union struggle may benefit permanent workers to a certain extent through wage increase and other economic benefits. But beyond such narrow confines of economism, all one is left with, is a mirage of a movement that gets defined as workers’ struggles.

The recently passed labour codes are not, as many would have us believe, a bolt out of the blue. In fact, the codes have taken the realities on the ground and the impotency of the central trade unions and have only formalized the realities that already existed. Even more so, they have built upon the repressive structures which already exist in most of the industrial areas, and special economic zones. Fixed term employee, as a dominant category for employment, is already a reality in most places, and getting a permanent job in a factory remains a dream for most of the workers in even the most organized parts of manufacturing sectors.

We cannot remember a single strike in the last few years in the Gurgaon belt, for example, which were “legal”. All the strikes were declared ‘illegal’ by the management. Let alone the unions calling a strike, even unionizing workers and getting the union formally recognized has become a long drawn legal and political battle for the workers. So when a code formalizes an already existing reality, by declaring all flash strikes illegal, and imposing restrictions on unions, an authoritative state is merely announcing its triumph, acquired over a long period of time, in relation to the trade union movement.

Let us now look at the demands that central trade unions have put forward for the strike on 26th November, 2020. These demands are the kinds of demands that even a well-organized NGO platform could also have put forward. The list is as long as it is repetitive (most of the demands in the charter has existed for at least twenty years, as none of the core demands have ever been met and the number of demands keeps on increasing).

Some of the new demands this time around are:

The first and second demands, as important and relevant they are in today’s times, are demands for ‘welfare measures’ and have absolutely nothing to do with rights of the workers as such. More specifically, these demands have nothing to do with the rights of permanent employment, eight hour work day, right to organize and right to dignified living wage. MNREGA is a scheme that saves a precarious social group, which is on the verge of starvation. For central trade unions to place MNREGA as one of the primary demands, is to concede that they do not wish to fight against the mutation of a worker or a farmer into a precariat, but simply want to act as more effective NGOs, equipped with the ability to organize national strikes. The third and forth demands are so generic, that they become vacuous and both the unions and the workers are aware of it. However, they carry most relevance for a radical left trade union movement.

But why should the government listen? Will a management in any factory in Gurgaon listen if the protests are held miles away from the factory premises without disrupting production in Jantar Mantar? Will large automobile factories in Tamil Nadu listen if gatherings are held with a handful of permanent workers in a bus-stand, with leaders churning same worn out speeches? If this is not deceiving the 26 crore workers, then what is?

The central government, in conjunction with the national and international capital, has thrown down a gauntlet. There is no longer a space for trade union struggles which rely primarily on legal and bureaucratic means. The days of old forms of trade unionism politics are gone in the neo-liberal age. Ironically, the new codes want to rename the unions as “negotiating” bodies. But that is all most of the unions have been reduced to anyway. Perhaps even fascists and capitalists possess a sense of irony!

As observers of such a compromised trade union movement, here are some of the questions we would ask the leaders of the central trade unions and the organizers of such mass strikes: