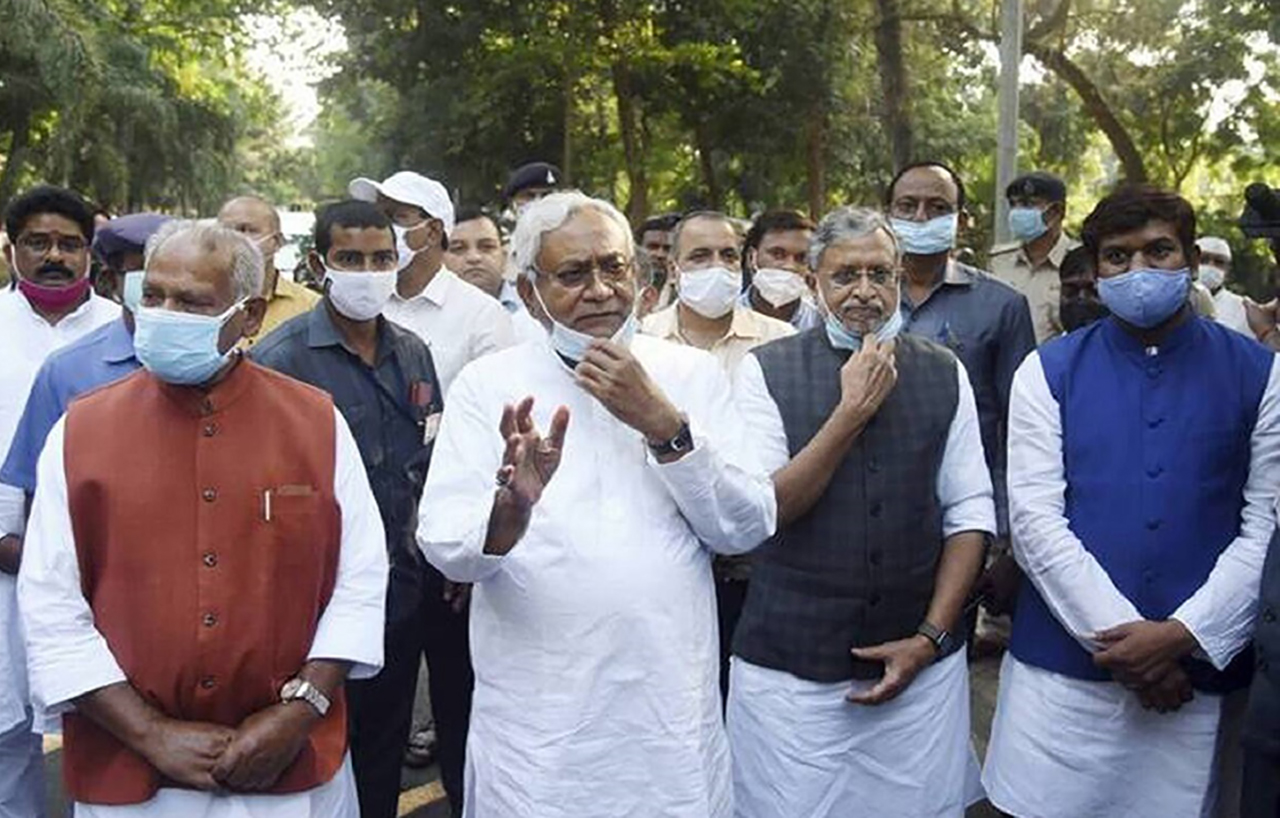 Tough Times Ahead for Nitish Kumar in Bihar

Nitish Kumar’s latest tenure will be very challenging because he will have to face not only an emboldened block of opposition parties but the restless and angry mood of the people who are no longer prepared to be ruled by old methods, writes Anish Ankur from Patna.

Political drama runs high in Bihar even after the election results were announced and a new government took power. The moment Nitish Kumar and his council of ministers were administered the oath of office, his government landed into controversy due to allegations of corruption levied against Mewalal Chaudhry, his education minister. Chaudhry was forced to resign within three days of taking office. Moreover, as Nitish Kumar’s oath-taking ceremony was underway, students were marching on the roads of Patna, protesting against the failure to arrest those allegedly responsible for the killing of a young Muslim girl who was burnt to death, despite her identifying the attackers before her death.

Nitish Kumar has become the chief minister of Bihar for the seventh time. The BJP’s dominance in Nitish Kumar’s government is clear. For example, Nitish Kumar’s trusted ally in the BJP, Sushil Kumar Modi, who had been deputy chief minister for over a decade, has not been included in the new government. Sushil Kumar Modi was replaced by two deputy chief ministers – Tarkeshwar Prasad, a four-time MLA from Katihar, and Renu Devi, several-time MLA from Bettiah. Tarkeshwar Prasad elevation to this post is linked to the new priorities of BJP in the communally sensitive area of Seemanchal, with an eye on the upcoming Bengal elections. His age has become a controversial issue — in his election affidavit his age was given as 48 in 2005, 49 in 2010, 52 in 2015, and in this 2020 election affidavit it has increased to 64 years.

Will Nitish Kumar enjoy the authority he has wielded in the past NDA governments’ in the state? Nitish Kumar’s Party (JD-U) strength in the present assembly has been reduced and he is now the junior partner of BJP. According to Gajendrakant Sharma, a political analyst

“Nitish Kumar’s hand will surely be tied by BJP which is now the big brother in NDA-3. The removal of Sushil Modi is a step in this direction. The post of speaker will also go to the BJP. All these trends indicate that Nitish Kumar will have a tough time trying to keep the NDA government in order.”

It is already known that a senior BJP leader will be elevated to the post of the Speaker. In the last NDA government, the speaker’s post was retained by the JD-U.

The Curious Case of Mewalal Chaudhry

Mewalal Chaudhry had previously come under attack over corruption charges during his stint as the vice-chancellor of Bihar’s Agriculture University, Sabour, which had led to the lodging of an FIR against him and his subsequent suspension from JD-U. His name surfaced again in the BAU recruitment scam and an FIR was lodged against him once again by the order of the Raj Bhawan in a case involving appointment of 161 assistant professors and junior scientists. Nitish Kumar’s stated objective that he will never compromise with ‘Crime, Corruption and Communalism’ came under severe criticism when a man still under a cloud of corruption charges was inducted into the government. The people of Bihar still recall the time in 2017 when then-Deputy Chief Minister Tejaswi Yadav’s name figured in a corruption case. Nitish Kumar insisted that Tejaswi Yadav should come clean and issue a clarification over the corruption charges but Tejaswi refused. On this pretext, Nitish Kumar ditched his alliance partners – the RJD and Congress – and crossed over to the NDA. Another very serious controversy related to Mewalal Chaudhry is his wife’s death after burn injuries. His wife Nita Chaudhry was an MLA from the same Tarapur constituency. Mewalal is the current MLA from Tarapur. A suspended IPS officer named Amitabh Kumar Das has written a letter to the DGP of Bihar to investigate the possibility of a connection between the appointment scam and his wife’s death.

More Crorepatis in This Assembly

According to the latest study by the Association for Democratic Reforms (ADR) and Election Watch, which analysed the self-sworn affidavits of 14 of the ministers of Kumar’s cabinet, found that eight of them have criminal cases, and six of them have serious criminal cases against them. The list of eight includes four from the BJP, two from JD-U and one each from HAM-S and VIP.

In the new Bihar Legislative Assembly, 163 (or 68%) of the 241 MLAs, across parties, have criminal cases lodged against them. This is higher than the last time, when out of 243 MLAs analysed during Bihar Legislative Assembly elections in 2015, 142 (or 58%) had declared criminal cases against themselves. A writ petition has been filed in this regard by Brajesh Singh, a lawyer, in the Supreme Court.

Mewalal Chaudhry is the richest of all the elected MLAs, with declared assets worth 12.31 crore rupees. The average assets of Nitish Kumar’s 14 cabinet ministers is 3.93 crore. The number of crorepatis and persons with criminal backgrounds has increased compared to the previous legislative assembly. As ADR and Election Watch showed that out of the 243 MLAs in 2015, 163 (or 67%) were crorepatis. This time the number has gone up to 184 (or 81%) in 2020. The BJP had the largest share of such candidates (65), followed by RJD (64), JD-U (38) and the Congress (14). The average assets of winning candidates in the state was 4.32 crore rupees, while 61 candidates had assets totalling above 5 crore. It is also worth mentioning that electoral bonds worth a total of 282 crore rupees were sold between 19-28 October before the assembly election.

The Tragic Case of Armida

In a shocking incident, a 20 year old Muslim girl named Armida (name changed) was burned alive after she resisted sexual harassment. Many political leaders and women’s organisations are demanding justice for the Armida. Some culprits have been arrested after much hue and cry but others are still at large.

The perpetrators, who hailed from the same locality, had poured kerosene oil over Armida in Rasoolpur village under Desri police station in Vaishali district of Bihar on 30 October. When Armida stepped out of her house to dispose of garbage, the perpetrators first tried to harass her. When she threatened to tell their parents, they poured kerosene oil on her and set her on fire. The girl sustained severe burn injuries, and succumbed to the injuries on November 15.

A video of Armida naming her tormentors from her hospital bed went viral soon after she was admitted to Patna Medical College and Hospital. In the video she can be heard saying that “ I was going to throw garbage around 5 pm when Satish Rai, Chandan poured kerosene over me and set me ablaze.” When this incident had taken place the elections were in full swing. Taking advantage of the election campaign , the police administration tried to hush up the matter. Osama Khurshid says “After her death, some students of Patna University, notably from the Ikbal and Nadavi hostels gathered near the post-mortem room. Along with the dead body, an agitation was organised at Kargil Chowk, Patna. After that the police came into action.”

When Nitish Kumar was being administered the oath of office, students of Patna University were taking out a procession on the Ashok Rajpath chanting the slogans “Nitish Kumar Murdabad (Down With Nitish Kumar)” and “Arrest The Killers”. CPI Bihar’s state secretary Ram Naresh Pandey and newly elected CPI MLA Suryakant Paswan were the first to meet the victim’s family. After that, women’s organisations like the AIDWA, AIPWA, and Bihar Mahila Samaj, along with other women’s organisations are regularly protesting the brutal killing of Armida.

Nitish Kumar’s latest tenure will be very challenging because he will have to face not only an emboldened block of opposition parties but the restless and angry mood of the people who are no longer prepared to be ruled by old methods.