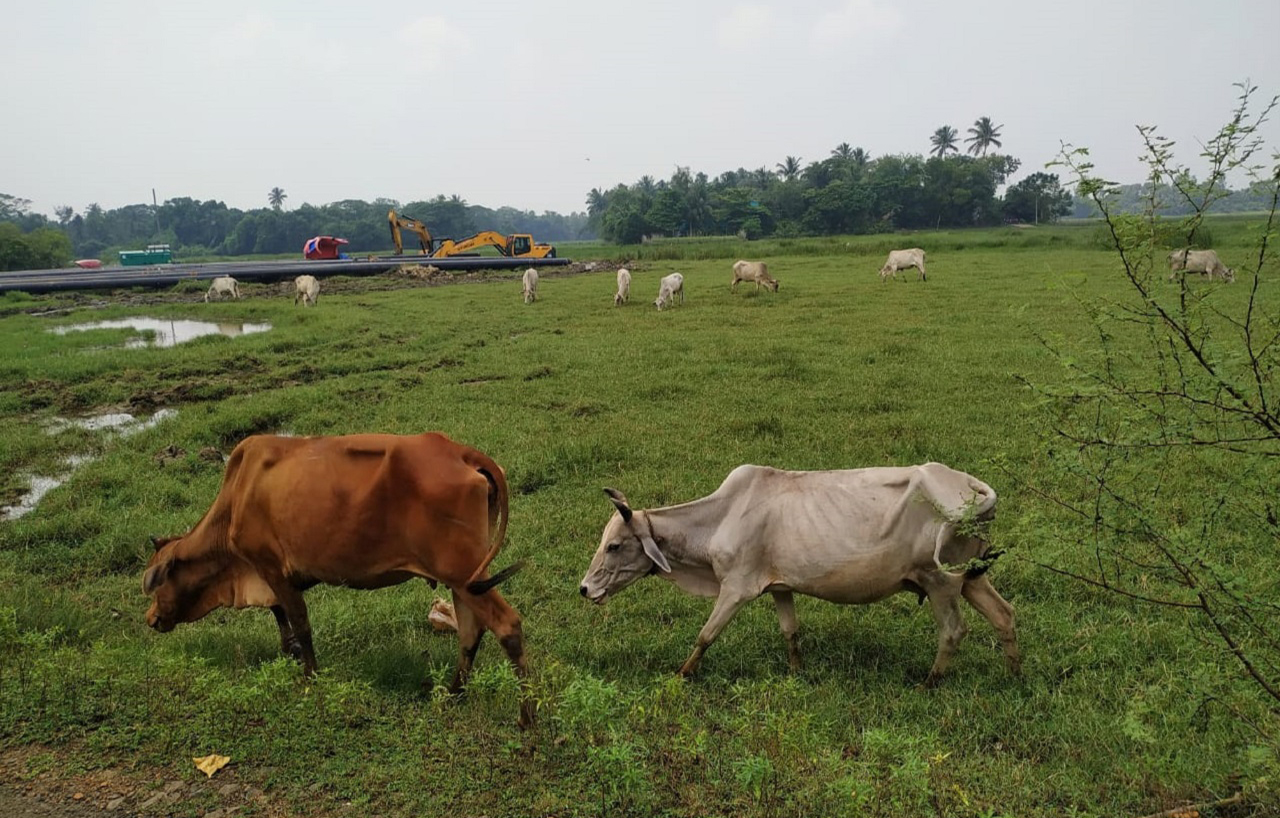 The people of Dhinkia in Odisha are protesting against land grabbing in the guise of development as Indian Oil Corporation (IOCL) starts work on its 1200 km long Paradip-Hyderabad pipeline project. A report by Surya Shankar Dash.

The misrule of the Biju Janata Dal (BJD) government is most blatant when it comes to matters of land acquisition for industrial projects, and amongst the several places across Odisha where the BJD government has tried to force its way to acquire land at gunpoint, Dhinkia in Jagatsinghpur district stands out for being subjected to unprecedented repression for more than two decades. The protests against the South Korean steel company POSCO that took place from 2005 onwards brought out the worst in Naveen Pattnaik, who sent platoons of police to besiege Dhinkia for years and launched violent crackdowns upon peaceful protests by women, children and senior citizens.

The people of Dhinkia Charidesh faced batons, bullets, bombs and innumerable fake cases but remained firm in their opposition. The POSCO project would have displaced Dhinkia, Patana, Gobindpur and other villages, wiped out hundreds of acres of farmland, plundered thousands of acres of coastal forest, and dredged up a river mouth for the construction of a port.

The people of Dhinkia were not new to land grabbing in the guise of development as Indian Oil Corporation (IOCL) had already snatched a large part of the farmlands owned by the Panchayat to build a petroleum refinery. As usual false promises of permanent employment and a lucrative life were made to the displaced peoples but never fulfilled. Those who lost land became agricultural workers in the betel vines of Dhinkia. The same story repeats itself every few kilometers in the region, owing to the close proximity of the Paradip port, where several steel and fertilizer industries have sprung up on what was once one of the most fertile lands of Odisha. The IOCL refinery and its petro-chemical project is one of the largest industries in the region. Every project in the region has an untold and unending story of state repression, injustice and misery.

Now IOCL has started construction of its Rs. 3800 crore, 1200 km long Paradip-Hyderabad pipeline project for transportation of 4.5 MMTPA of petrol, diesel, and aviation fuel. About 330 km of the pipeline will be in Odisha, 723 km in Andhra Pradesh, and 160 km in Telangana. The pipeline will pass through the following forest divisions in Odisha, namely Rajnagar, Cuttack, Puri, Bhubaneswar, Khurda, Nayagarh, Ghumsur and Berhampur. 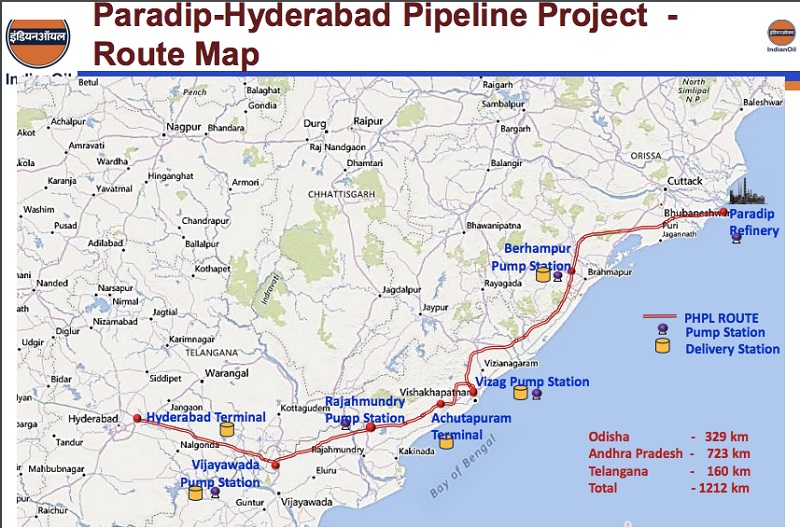 The pipeline project construction works began with the Indian Oil Corporation’s team digging up 11 acres of grazing land that belongs to the Dhinkia Panchayat. This land has been preserved for cattle grazing for hundreds of years and everyday thousands of the Panchayat’s cattle feed on the grassland. The construction work began hastily without any permission from the Panchayat. This has adversely affected the grazing land and is posing grave risks to the cattle that feed there everyday.

On 1st October 2020, in a letter to the District Collector, the people of Dhinkia raised the matter highlighting the fact that the pipeline construction work was being carried out in plots numbered 1940/1980, 1931/2977, 1938/2982, 1976, 1977, 1932, 1933, 1934 and other nearby plots that have been preserved by the people of Dhinkia for cattle- grazing. When confronted, the Indian Oil officials showed two letters to the people as proof of permission from the state government.

The first letter dated 18.3.18 is addressed to the Dy. Collector of Jagatsinghpur and signed by the Tahsildar of Ersama, and is a reply to an earlier letter from the Collectorate. The letter is nothing beyond a submission by the Tahsildar of a ‘prescribed format for grant of Right of Way’ to IOCL for the project and also mentions that a sum of Rs. 2, 41, 513/- is to be paid by IOCL as license fee. The second letter, dated 21.6.18 is from the Collector to the Principal Secy. to the government recommending that Right of Way be granted to the IOCL. 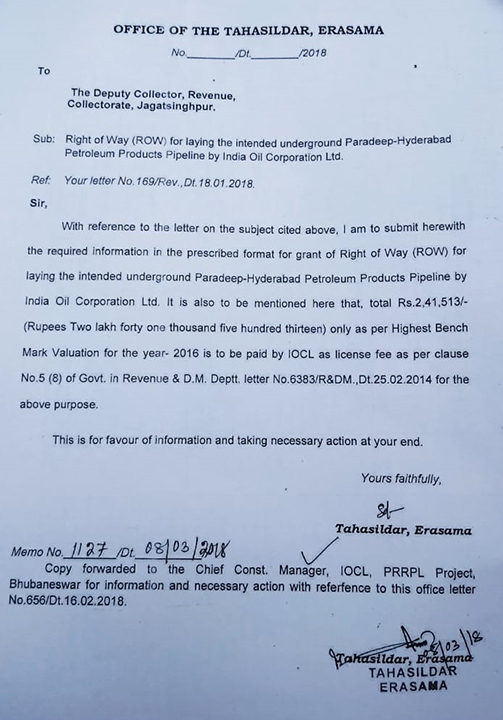 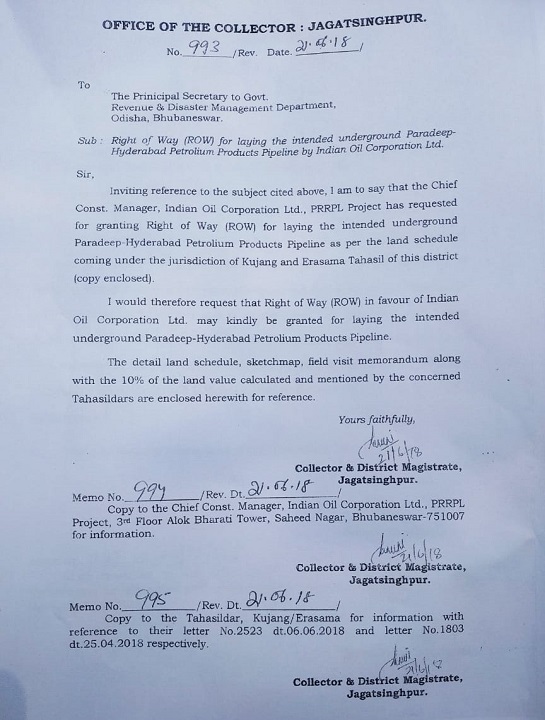 On 1 Oct 2020, the people of Dhinkia wrote to the Jagatsinghpur Collector highlighting the matter of IOCL carrying out illegal and forceful construction works, about the letters being furnished by IOCL as ‘Right of Way’ and that the letters don’t mention the fact that the concerned land was grazing-land of the Panchayat. In the letter the people of Dhinkia demanded that the government must pass a resolution to not only stop the construction but also to prohibit any diversion of the Panchayat’s land. Following inaction by the government in removing the construction equipment and restoring the grazing land, the people staged a massive protest demonstration on 9 Nov ’20.

3. Indian Oil had declared it would ‘adopt’ Dhinkia Panchayat but till date we have not seen a single development activity initiated by Indian Oil. The company has made no contribution in the development of health, education, agriculture, livelihood, transports, etc. We demand the following provisions from Indian Oil –(i) Drinking water facilities in the village (ii) Construction and maintenance of village roads (iii) Lighting of village roads (iv) Repair and maintenance of Primary Health Centre, appointment of doctors and supporting staff.

Besides this project, another 1400 km long pipeline project from Numaligarh in Assam to Paradip in Odisha is to be laid by the Oil & Natural Gas Corporation. Both these projects pose grave threat to large swathes of land across states covering forests, farmlands, grazing grounds, waterbodies, etc. Paradip is already amongst the most polluted places of the country and has no more capacity to sustain more such industrialisation. The project also poses great risks to Adivasi and Dalit communities through whose land the projects will pass through.

The IOCL’s Paradip-Hyderabad pipeline project poses a major threat to ecology, agriculture and human life. It is highly likely that the slightest leak or accident will spiral into deadly and uncontrollable hazards. In 2014 a GAIL pipeline blast in Andhra Pradesh killed 22 people and injured 37. Every year there are several accidents that occur in the pipelines operated by IOCL, ONGC, GAIL, etc. and these accidents happen in the form of explosions and fires that causes extensive damage to flora & fauna, water bodies, farmlands and human life. Oil and gas pipelines across the world have a terrible history of being disaster prone and it is because of such threats that pipelines are facing immense opposition from the indigenous people even in America, the Standing Rock agitation there being one of the most well known instances in recent years.

Whether the people of Dhinkia will receive worldwide solidarity for their resistance like it happened during Standing Rock agitation or not, they have proved again and again, be it in the matter of the POSCO project or JSW Utkal, they will stand strong in opposition to this pipeline project till their last breath, to protect the jal, jangal and jameen of Dhinkia Charidesh.

The author is a filmmaker-activist from Odisha.