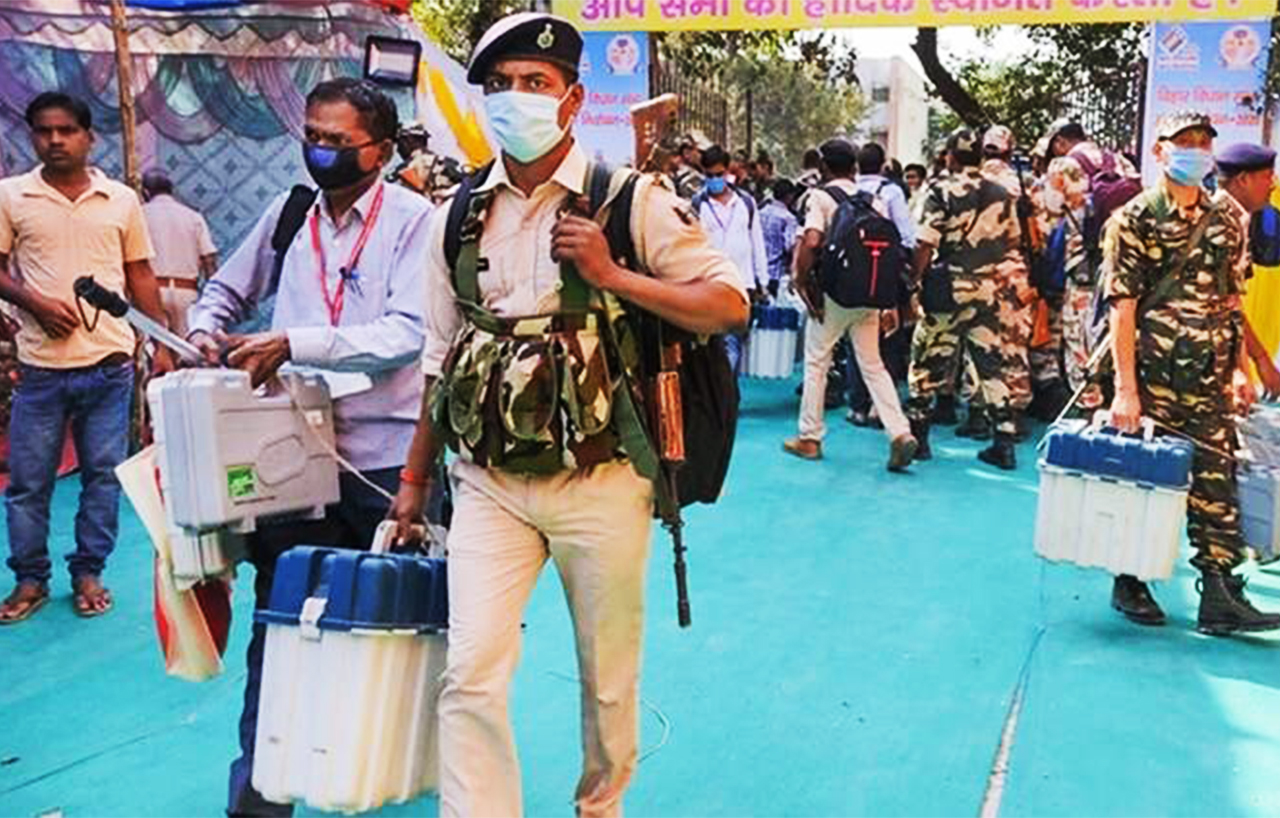 “Our priority is to defeat the communal force of BJP” : A Report from Bihar

The first phase of the Bihar assembly elections began today (28 October). 71 assembly constituencies, having 243 seats, are involved in this process. A Groundxero representative visited several villages in the Bikram, Paliganj and Arwal constituencies, and tried to reach out to different communities in order to get an overview of the public opinion.

We first visited Katarhi village, about 8-9 km from Bikram, and 40 km from Patna.

“Bhajpa ek aisa ped hai jis par fal lagne par jhukata nahin balki aur uncha hota chala jata hai” (BJP is like a big tree that doesn’t lower its branches even if they are heavy with fruits, but keep rising higher). “BJP is shifting beyond the reach of common people. They have not given ticket to Anil Kumar – a popular BJP leader in the Bikram constituency – but practically to a non-entity,” says a farmer from Katarhi.

Katarhi is situated near the bank of the Sone river. When Groundxero visited this interior village of Bikram constituency, under Patna district, the roads looked dilapidated. According to the villagers, there was neither a government school nor any health centre within 8-9 km of the village. The area suffered from frequent sand mining. Many sand mafias were operating there. Continuous excavation was going on, in most cases without adhering to the standard procedures. Some villagers, sitting near the village temple, were discussing the upcoming polls. When asked whom they would vote for, the popular ‘independent candidate’ was their unanimous choice. One of the elderly villagers explained, “BJP has given ticket to an unknown person, who is not familiar with the people in this area. Although Narendra Modi is good, but their state level leaders – especially Sushil Kumar Modi – have prevented the popular BJP candidate to represent the party in the election; hence he is contesting as an independent candidate.” The villagers were were very critical of the existing Chief Minister’s pet programme Har Ghar Nal Yojana (100% tap water connection to every home). He further added, “The Har Ghar Jal Yojna program of Nitish Kumar is a complete failure because it has not been designed keeping in view of the ground reality. Suppose a part of the water tap gets dysfunctional. It will take at least 3000/- to fix it. Now who in these remote villages would invest such an amount? You know, in government machinery, employees hardly respond to people’s complaints.”

On our way to Bikram, we met with villagers of Barah. The road was under construction. Villagers were sitting on a cemented platform under a huge Peepal tree. There was a Primary Health Centre next to the tree. One of the villagers, Shailendra Sharma, commented in a jocular manner, “In this government hospital, hardly any professional and competent doctor comes in. A quack comes regularly but he advices Homeopathy medicine only.”

It was an upper caste Bhumihar-dominated village. Despite all the difficulties, they were clearly not critical of Narendra Modi, but blamed the local politicians and authorities for all their problems. When asked about the three farm bills passed in the Parliament, they responded by saying that they indeed heard about it, but did not know the nitty-gritties regarding how it could affect them. When asked about the election, they were confused and undecided about whom to vote for. A Grand Alliance Congress candidate? Or an ‘Independent nominee’? It seemed, BJP was out of the race in this constituency.

Then we went to Ravidas Tola in the Aspura Village in Bikram constituency. Although the houses were ‘Pucca Makan’ (permanent dwelling), when asked about the Corona crisis, an old lady in her sixties told us, “We have lost our jobs during the pandemic. The biggest crisis we faced was that of potable water, particularly in the summer. Had some upper caste men in this village not come to support us, the situation would have been very bad for us.” Another man in his fifties said “Our names have been enrolled in the BPL, but we hardly get any ration from the government. We have complained several times, but of no avail.” A young woman spoke about the dysfunctional street light, “The street bulb is not working for several months now, but none of the political representatives cares about it.”

In Aspura village, a Primary Health Centre also runs as a Trauma Centre. In the Trauma Centre, we found dust gathering on the ambulance, which was locked in a garage from several months. The Trauma Centre was constructed about two decades ago, but Jot Kumar and Anand Kumar, local online journalists, commented, “Even after so many years, this Centre has not even been inaugurated. In every election, the Trauma Centre is mentioned by the political parties as well as by the people, but everyone forgets about it once the election is over.”

Kumar Varun, a Hindi professor in the Jai Prakash Narayan University, Chhapra, whose ancestral house was situated behind the Trauma Centre, blamed the privatization policy for the situation, “The government wants to promote the private sector in place of the public sector. So how can it be expected that the government would invest money in its own old projects? These days, elections are run by event managers, hence it’s unlikely that they would raise the issue of government hospital.”

Sigaudi is situated around 10 km away from the Paliganj market, and almost 60-65 km from Patna. It is famous for handloom (Hast Kargha). It has been considered one of the important handloom centres for the weavers’ community (predominantly Muslims) in Patna district. There are many small handlooms factories running in the Sigaudi market. The village is situated on the bank of ‘Punpun’ river.

Roads from Paliganj to Sigaudi were in good condition. On the way to Sugaudi, posters of political parties – particularly CPI(ML) candidate Sandeep Saurbh – were visible on the walls of mud houses. Sandeep Saurbh is a young political worker, who was the General Secretary of JNUSU earlier. He quit his Assistant Professorship to contest this election. He is a Grand Alliance candidate, locked in the three-way fight with the NDA and the LJP candidates.

With the presence of Jaiwarddhan Yadav alias Bachha Yadav, grandson of famous leader Ramlakhan Singh Yadav, a doyen of his community before the advent of Lalu Prasad, and LJP candidate Usha Vidyarthi, ex- BJPMLA, Paliganj is one of the hottest seats in this first phase election, where BJP has done a new political experiment, in which the LJP candidate has been stood against the JD(U) nominee, although LJP is part of NDA at the centre.

Weavers’ community in Sigaudi are facing a lot of challenges. The most important challenge was in marketing their products. The produced goods often don’t reach the market, as the middlemen grab the lions’ share. If the government supports them, they have the potential to extend their business beyond state boundary. The lockdown has severely affected their business.

What is the difference between 15 years of Lalu rule and the ruling period of Nitish Kumar? Md Slauddin, an elderly man owning a factory commented. “During Lalu’s rule, the situation was very bad for the handloom sector. No proper roads, no electricity, therefore running a handloom factory was very challenging and risky. When Nitish Kumar became the CM, at least roads were improved and electricity was made available, which led to some improvement in our situation.”

So which government was better for the handloom sector? Md Salauddin opined, “If we look at which period was better for us, I’d say, it was the Congress government. At least during the election time, the Congress party used to write off the little loans that we had to take. But after Narendra Modi came to power, things started worsening. This BJP government extracts three time higher money against the meager loan that they provide. Suppose we get 20,000/- as loan, then we have to pay back 60,000/- with interest. The system does not only suck our blood, but puts us through a lot of mental torture. We don’t want any more loans from this government.”

His young son, Azam, added another dimension to this problem, “NDA government ordered us to make Saatrangi Chaddar (Seven coloured sheets). We were happy to get government contract, but we didn’t get our due payment. At least 70 lakh rupees are still pending at the Bihar government’s handloom corporation. We have given so many petitions before the government, but nothing has come out of it. When Nitish Kumar came here, we have placed our demands before him as well, but nothing happened.”

When asked about the election scenario in the Paliganj constituency, Azam frankly commented, “In this segment of the assembly, the weavers wanted to vote for Mahagathnbandhan (Grand Alliance), but there is a Muslim candidate from the other party too, and we support him. There is a feeling amongst the Muslims here that even the Grand Alliance parties are happy to have the votes from the minority community, but when it comes to giving us ticket for election, they deny our claim. CPI(ML) used to give ticket to Anwar Hussain in Paliganj constituency, but when the alliance with RJD formed, the Muslim candidate was replaced by a Yadav candidate. Now we feel that we must show how minority votes matter. We’ll decide just a day before the election where to cast our vote – Grand Alliance, or a representative of our own community.”

Arwal is about 30 km north of Paliganj and 80 km from Patna. We visited Purani Arwal (Old Arwal) locality of this constituency. The majority population consisted of Muslims. But their mood around the election was quite different from the Sigaudi Weavers. They unanimously wanted to vote for the Grand Alliance candidate Mahanand. Mahanand is an old CPI (ML) worker and fought several times from Arwal.

Expressing how these voters from the minority community felt, Dr Shabaj Ahmad, A government doctor, said, “In Arwal, our main concern is security and safety of our family. In 2017, Arwal had to face the communal riots. People were brought in from outside this area to cause mayhem. See, BJP is totally against the minorities, therefore, we’ll vote for the Mahagathbdandhan.”

Azmat Ayub Quadri, a government clerk, explained it further, “BJP has worked against the minorities right from the beginning. Take any issue like CAA, NRC, NPR or abrogation of Article 370, the issue of Ram temple construction and so on. The Judge, who gave the verdict in favour of the Ram Mandir, joined BJP after retirement. What does it mean? We do not want anything from government. We will take care of our livelihoods ourselves, just give us a sense of normalcy in our heart and mind, which we are lacking badly at this moment. Poor Muslims earn their living by doing small jobs, but riots are engineered in order to crush whatever little economic backbone that we have created with our own labour. BJP has poisoned the entire atmosphere on religious notes. Therefore, our first electoral priority is to support those candidates, who can defeat the BJP candidate.”