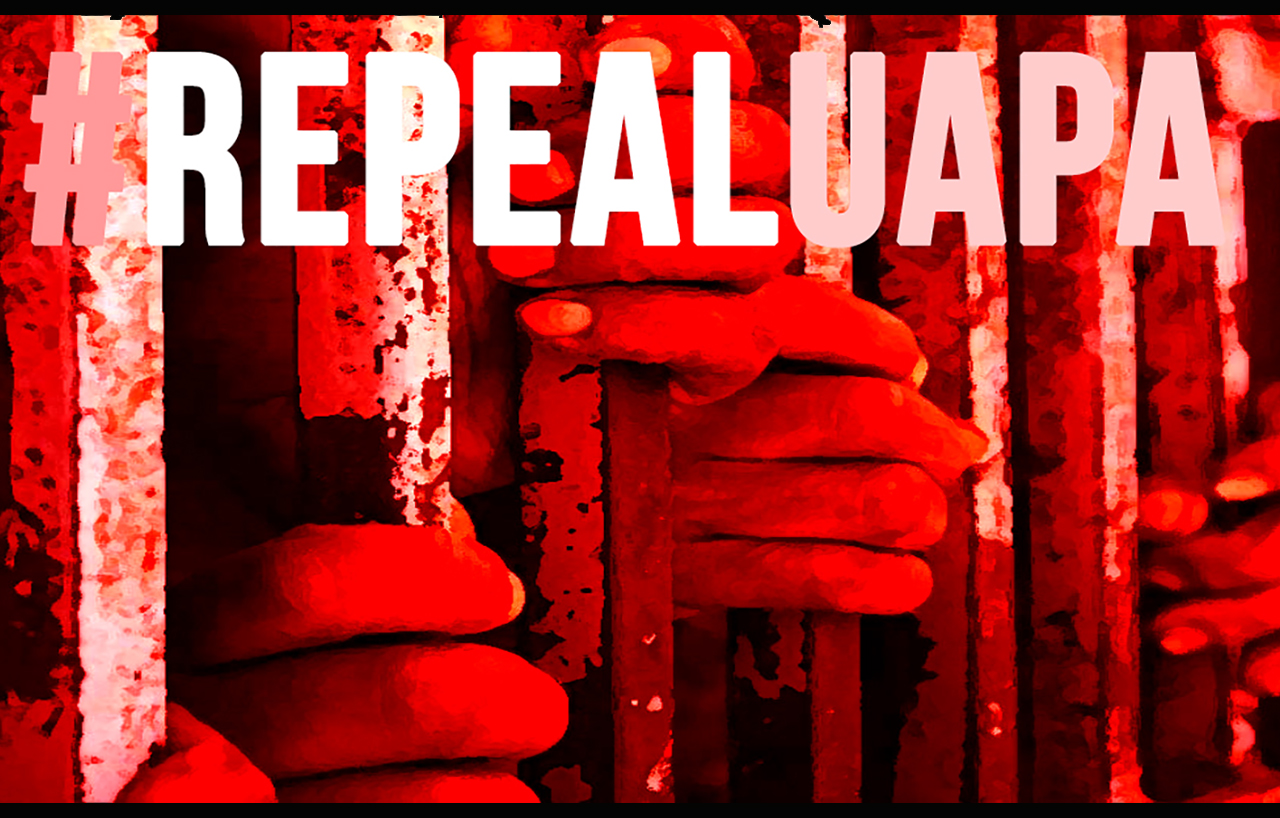 Report of the Virtual Press Conference held on 21st October, 2020 organised by the PUCL All the civil society representatives and political leaders unequivocally condemned the Bhima-Koregaon case, attack on democracy and federalism and demanded immediate release of Stan Swamy and other activists.

Call for repeal of UAPA!

On 8th October, 2020, 83-year-old Father Stan Swamy became the 16th activists to be arrested in the Bhima-Koregaon case. A month previously, on 7-8th September, cultural activists Sagar Gorkhe, Ramesh Gaichor and Jyoti Jagtap (members of Kabir Kala Manch) were also arrested in the same case. Since 2018, 16 activists, lawyers, poets, writers, cultural activists and intellectuals, who have worked for the rights of Adivasis, Dalits, minorities and other marginalized groups over many decades, have been jailed, and falsely charged with sedition and the draconian Unlawful Activities (Prevention) Act (UAPA).

Today (21st October, 2020), People’s Union for Civil Liberties (PUCL) organised a press conference against the recent arrests and the continuing attack on dissent and democratic norms through the Bhima-Koregaon case. The press conference was addressed by political leaders of opposition parties, eminent activists, and lawyers. Opening the meeting, V. Suresh, General Secretary of the PUCL, observed that while the vast majority of those accused under UAPA are finally acquitted in the case, the stringent requirements for bail make it very difficult for those charged under this Act to get bail, and consequently, they end up being imprisoned for years under fabricated charges. The `Bhima Koregaon model’ of arresting people unconnected with the incident, by roping in academics, lawyers, cultural artistes, film makers, journalists and activists for allegedly conspiring to overthrow the government, has now become the model used by the NIA and Central Government in the Delhi violence of February, 2020 and in Hathras incident also.

Summary of the speeches made by different speakers

Mihir Desai, senior advocate at the Bombay High Court, shared the history of the Bhima Koregaon violence that led to the case.  He pointed out that despite ample documentary evidence of the involvement of Hindutva leaders, Sambhaji Bhide and Milind Ekbote, in the violence at Bhima Koregaon on 1st January, 2018, the Pune police chose to investigate only accusations against Elgar Parishad, a gathering organized by 250 Dalit and Bahujan groups and presided over by Justice Kolse Patil and Justice PB Sawant.  He added that the chargesheets relied entirely on unsigned, unverified, uncorroborated type-written letters and the testimonies of a few witnesses, whose names had not yet been revealed to the accused.  As a lawyer, Mihir Desai clearly rubbished the evidence as unsubstantial, and the charges as completely flimsy. The fact that the accused, especially the elderly ones, are being denied COVID bail points to the intention to persecute. He added that the Central Government ordered the NIA to take over the investigation as soon as the Maharashtra government started raising questions about the evidence for “reasons too obvious to state.”

Jharkhand Chief Minister Hemant Soren, unable to join the press conference, sent a video message. He acknowledged Stan Swamy’s work with the Adivasis and marginalised in Jharkhand since decades and strongly condemned his arrest. He added, “Today, it is the issue of Stan Swamy, tomorrow it will be your turn, then it will be our turn.  Tomorrow it will be your state, today it is our state.”. He strongly spoke against the attacks on values of federalism. He gave the example of the recent auction of coal blocks without any consultation with the state government. He appealed to all political parties to come together and oppose the growing attacks by the BJP led central government on the civil liberties, federalism and the democracy itself. He specifically said, “when the country is subjected to anarchy, when Hitlerism is practiced at some places in the country, the opposition should not hesitate to stand together, irrespective of which political party they belong.” (The English transcript of the CM’s speech is attached).

Marianus Kujur, the director of XISS, Ranchi talked of Stan Swamy’s life, principles and work. He said that “Stan Swamy is not a tribal by birth, but a tribal by choice.” He has written extensively on tribal assertion and against land displacement. Stan has always stood for inclusiveness, diversity and for the poor. He raised a critical question that since 60 years, no one has ever raised such questions on him and how come he became anti-national in the last two years.

DMK MP Kanimozhi spoke strongly against the growing attacks on the right to dissent. The central government even used the pandemic as an opportunity to inflict anti-people laws on people. She added that is the time for people to break their silence, to gather and stand up together and fight against these attacks to save the country. Political parties have to make a choice at this time – are they going to be silenced and subdued, or are they going to fight for people’s rights, states’ rights and democracy? She also said that there is a need to repeal all draconian laws such as UAPA.

Sitaram Yechury, the General Secretary of the CPI (M), said similar to Bhima-Koregaon case, in the Delhi riots case too, the perpetrators are going scot free while the victims are being further victimised. He said that it is not a simple question of amending the UAPA – the entire UAPA law has to be repealed, along with sedition, since it is open to gross misuse.  He said that UAPA, sedition law and NSA need to be seen together as part of the larger plan of the BJP and RSS to pave the way for a rabidly fascistic, intolerant and authoritarian Hindutva nation. It is using central agencies to undermine the Constitution, while shielding the real perpetrators of violence.  The need of the time is for all opposition political forces to come together to defence the secular democracy, Constitution and to preserve human rights values.

Jharkhand’s tribal activist, Dayamani Barla, pointed out that Stan Swamy’s arrest is part of the larger conspiracy to loot Jharkhand’s natural resources – jal, jangal, zameen. The need of the hour is for all people to come together – be it political parties, social activists, or writers and intellectuals – resist the illegal UAPA, and declare that they will not give up till the UAPA is repealed.

D Raja, General Secretary of the CPI, reminded everyone that during the Bhima Koregaon violence, thousands of Dalits were not only attacked, but they were also charged with violence in hundreds of cases.  He recalled that the CPI has opposed UAPA from the time it was introduced, has also pointed out the dangers of Right Wing Extremist organizations which are trying to convert our democratic nation into a theocratic nation, when other parties only talk about Left Wing Extremism.  He also requested organisations and political parties to stand up for G N Saibaba who is being denied bail despite being 90% disabled. The central government is ruthless government and does not believe in Constitution and democracy as opposed to B R Ambedkar’s vision and values. He also added that the larger fight is to call out the communal, fascist ideology of RSS and BJP.

Shashi Tharoor, Congress MP from Kerala, unequivocally condemned the arrest of Stan Swamy, called the charges against him preposterous, and his arrest “inexplicable,” seeking his immediate release. He recalled the extensive work that Stan Swamy had done with the adivasis of Jharkhand and also that he had previously worked at the Indian Social Institute at Bangalore.  He said that people like Stan should be wholeheartedly encouraged in their noble work and stated that he stands in solidarity with Stan Swamy.

Rupali Jadhav of Kabir Kala Manch said that as the group always raised questions against anti-people policies of any government at power, and hence, they have always faced persecution. She said that her colleagues (arrested in the case) were being coerced by the NIA to give false evidence in a statement before a Magistrate under the threat of arrest. They were being asked to implicate others who had already been arrested.  They refused to do so, and chose to face arrest.  She added that despite evidence against Sambhaji Bhide and Milind Ekbote, leaders of Hindutva organisations, in the Bhima-Koregaon violence, they are still roaming scot-free. On the other hand, organisations of Adivasis and Dalits, such as the Kabir Kala Manch, are being attacked by the government.

NCP’s MLA Supriya Sule said that she grew up in a liberal India where people could raise their voices to question those in power. But now anyone who speaks is branded as anti-national. She clearly said that the Bhima-Koregaon case that happened in her area in Maharashtra, there is absolutely no connection between the activists (accused) and the violence. Everyone knows that they are innocent and the NCP is with them. She added that whenever the state government wants to carry out a fair investigation, the central government intervenes and does not allow it. In the instant case of Bhima Koregaon violence, when Maharashtra police under the current government was being very fair and just, the Central Government ordered the NIA to take over the investigation. She called the current situation a state of undeclared emergency.

Eminent economist Jean Dreze pointed out that there are several draconian laws, such as the UAPA and certain state laws that are increasingly being used to target Dalit, Adivasis and the marginalised people, not just intellectuals, and brand them as Maoists. Stan Swamy worked on the issues of under-trials and it is ironic that he himself has become one now, facing the same fabricated charges. He added that in the past, political parties did not take a stand on such laws. Now for the first time, there is a prospect of building a broad based coalition against such draconian laws, as the political parties themselves are becoming targets of such laws. There is a need to consolidate the opposition to UAPA & such laws and make it go beyond certain political boundaries. He called upon the parties to give a pre-commitment to repeal of such laws if they came to power, as part of their commitment to democracy at large.

Theodore Mascarenhas, the Auxiliary Bishop of Archdiocese, Ranchi, called the arrest blot on the country’s democracy and traditions.

The Bhima-Koregaon conspiracy case exposes the extent to which the central government is willing to undermine constitutional values and suppress dissent. All the civil society representatives and political leaders unequivocally condemned the Bhima-Koregaon case, attack on democracy and federalism and demanded immediate release of Stan Swamy and other activists.

PUCL demands from the Central Government:

The meeting gave a call to all political parties, human rights groups and civil society organisations to unitedly launch an All India campaign for the repeal of UAPA and sedition.

The videos of speeches of speakers are available at

and documents are available at