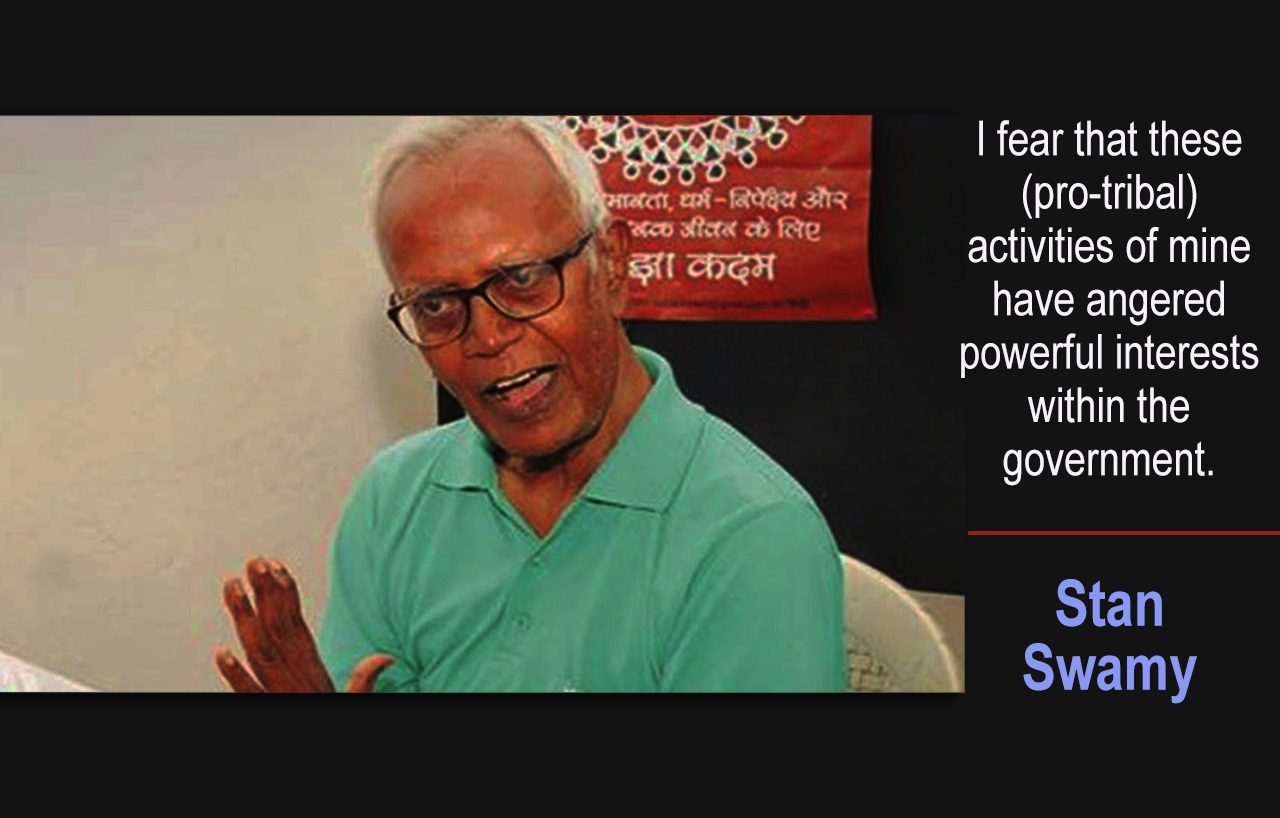 The National Investigating agency (NIA) on Thursday arrested 83 years old social and human rights worker Fr. Stan Swamy from his residence in Bagaicha, Ranchi in Jharkhand. Fr. Swamy was previously been questioned in Bhima Koregaon case, in which he was booked as a “suspected-case”. In a video statement released earlier today, Fr. Swamy said the NIA officers had recently interrogated him for 15 hours over a span of five days. He alleged that the officers were trying to implicate him for having connection to “Maoist forces”, based on extracts of information from his computer. Fr. Stan Swamy stated that those information were stealthily put into his computer by the investigating agencies and he disowned them. Meanwhile, People’s Union For Civil Liberties (PUCL) has issued an press release condemning his arrest by NIA.

PUCL is shocked by and condemns the detention and arrest by NIA police team of 83 year old Fr. Stan Swamy from his residence in Bagaicha, Ranchi to take him to Mumbai to be remanded in the Bhima Koregaon (BK) case for allegedly being part of the larger conspiracy to cause unrest.

The inhuman and insincere act of the NIA authorities in arresting Fr. Stan stands out for its sheer vindictiveness for Fr. Stan fully cooperated with the Investigating officers of the NIA when they questioned him in the Jesuit Residence in Bagaicha for over 15 hours, on July 27th, 28th, 29th, 30th and 6th August. Despite his advanced age and other age related ailments, Fr. Stan patiently answered all queries put to him. It should be noted that Fr. Stan’s residence was raided on 28th August, 2018 by the Pune Police then in charge of the BK case and his laptop, tablet, camera etc. were seized.

PUCL states that the arrest of Fr. Stan by the NIA is malicious and spiteful as Fr. Stan has consistently denied any link with extremist leftist forces or Maoists. He had also clearly told the NIA that some so called extracts allegedly taken from his computer shown to him by the NIA were fake and fabricated and that he disowned them. What also exposes the NIA action as motivated is revealed by the fact that in October, 2018, the police told the Bombay HC that Fr. Stan was only a suspect and not an accused. Thereafter, for 6 weeks after he was questioned the NIA kept quiet.  Now as the 6 month period for completing investigation after the arrest of Gautam Navalakha and Anand Teltumbde on 14th April, 2020 is approaching, the NIA wants to arrest Fr. Stan Swamy and possibly other activists under the completely fabricated and non-existent conspiracy of Bhima Koregaon case.

PUCL would like to point out that the true reason for NI arresting Fr. Stan Swamy today is because he had dared to expose the large scale abuse of anti-terror and sedition laws by the previous BJP-led Jharkhand government. Thousands of Adivasis were falsely implicated and arrested for exercising their fundamental right of protest in the Pathalgadi movement and kept in prison without hearing. Fr. Stan’s meticulous documentation of the untold suffering experienced by Adivasi youth, hundreds of whom were imprisoned for no offence at all, earned the ire of the police and the State which launched a witch hunt against Fr. Stan and some others in the human rights movement in Jharkhand. The data analysis of thousands of Adivasis arbitrarily arrested by the police was also put in an affidavit in a PIL filed before the Jharkhand High Court which upset the Government.

Fr. Stan has always professed his commitment to the Constitution of India and peaceful means of expressing dissent while questioning abuse of power by state executive and police. Through the arrest of Fr. Stan, the NIA is yet again sending a message to the rest of the human rights community that there is no level to which they will not stoop to silence and crush dissent.

PUCL demands that the NIA immediately release Fr. Stan Swamy and refrain from carrying out these arbitrary and motivated arrests of innocent law abiding citizens.