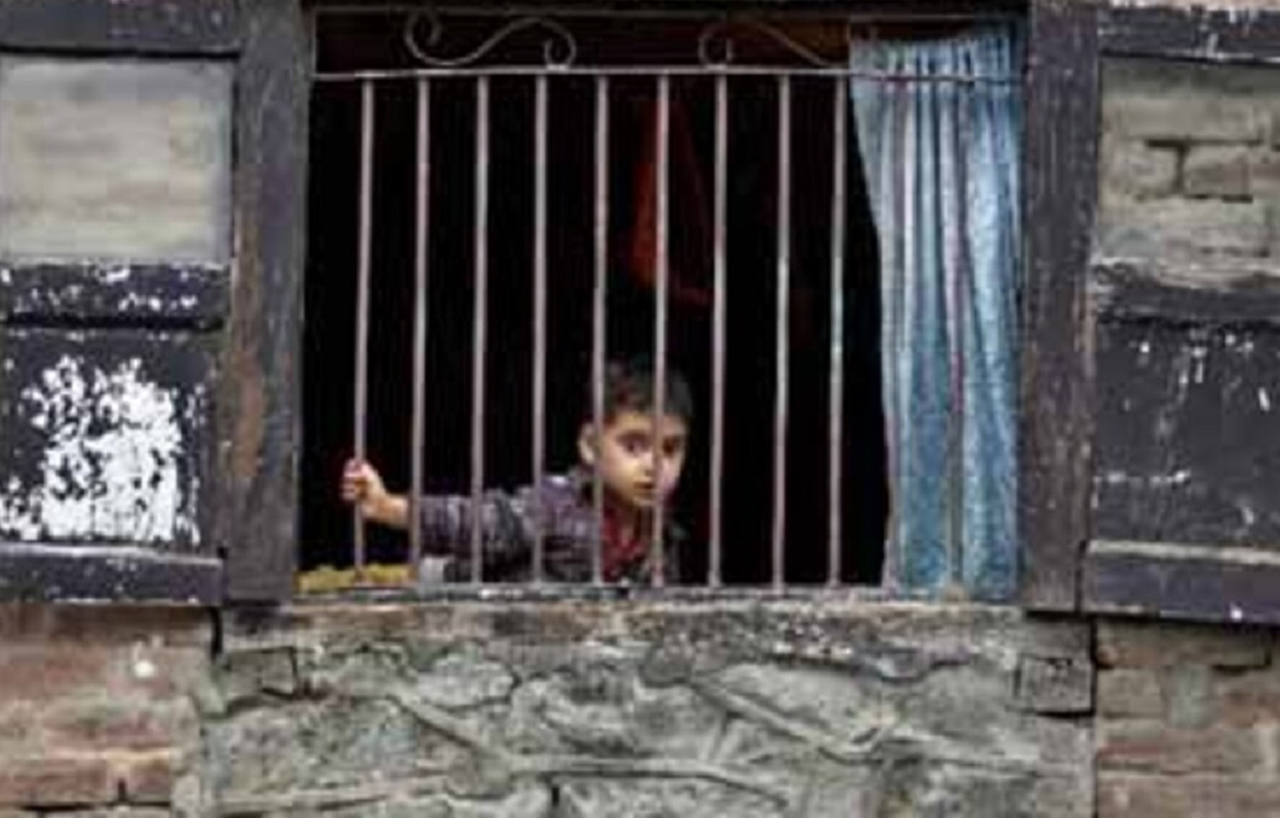 The decades-long conflict and heavy military presence across Kashmir is said to have psychological consequences on its people. A study showed that exposure to conflict in Kashmir played a significant role in “increasing the risk for PTSD symptoms”. Given the intensity of the mental illness crisis in Kashmir, it is necessary to make mental illness treatment accessible to all the affected, since many are afraid to seek medical help because of the taboo attached to the illness, writes Younis Ahmad.

It was 4 May 2015. The husband of Khurshid’s paternal cousin was at his home in Hazratbal’s Astaan Mohalla when two motorcycle-borne men came looking for him. They didn’t know where his house was situated, so they asked people in the locality where he lived. Once they found his address, they asked his wife to tell him that some “guests” from Rainawari wanted to see him outside. The husband was working in the Mechanical wing at Rainawari hospital. Assured that they must be knowing him since they mentioned Rainawari, he asked his wife to bring juice for them while he was going out to see them. The guests had their faces covered. One put his hand on his shoulder and another shot him from the point blank range. He was taken to Soura hospital, but could not be saved.

“We were very close to each other,” says Khurshid Mir, a class IV employee with the Floriculture Department of Kashmir, as he recalls in his single-storey yet-to-be-complete house in Hazratbal’s Gasoo locality what threw him into the mental condition he has been battling for almost five years now. “I spent five or six days at his home and when I returned, my entire body went numb and I could barely move my jaws,” he adds.

Khurshid’s recent prescription from Government Psychiatric Disease Hospital, Srinagar shows that he is being treated for PTSD. According to his family, although he has almost recovered, he is still required to visit the hospital every now and then.

“He lost interest in everything, even in his children. He would tuck in under three blankets and wanted his room all dark,” says Haseena, Khurshid’s wife, crying. “I would cook for the entire family, but none of us ate as all of us were worried about his condition. The food had to be thrown out eventually. The doctors would initially say that he needed happiness, and I would tell them that I had left everything for him and dedicated myself entirely to his wellbeing,” she narrates, barely able to hold back her tears.

It has been a tough and painful journey for Mir household, more so for Haseena. “I would take him to the bathroom and wash him myself as he wasn’t able to do it himself. He would only say, ‘What will I do now? What will happen to this and that?’ And I would console him by saying, ‘We need nothing but you’. This house took 7 years to build and it is not complete yet. How could it be? We sometimes couldn’t afford even tea,” Haseena continues. For six years Haseena lived with her five-member family in one room outside her newly-constructed yet incomplete house.

Over the years, Haseena has learnt that people with mental conditions need special care and one always needs to be there beside them. “When you have a person in such condition in the house, everything from food to medicine to support should be provided on time. I had to face a lot during that phase, which continued for well over 3 years. No one helps in trying times except God,” confesses Haseena.

Not the only case

The reason why Khurshid is on path to a complete recovery could well be attributed to his wife, who has prior experience in being with the family members who have been battling different psychiatric illnesses for decades, besides the medicines and many counselling sessions. Haseena’s mother, who died 4 years ago, too, had a mental illness which manifested itself through aggression and continued for over 35 years. According to Haseena, her mother picked it up after her mother’s brother rebuked or nudged her shoulder on some issue.

Haseena’s brother, who worked in the Indian Air Force, also had a mental condition which Haseena’s son describes as schizophrenia. Haseena says that his condition was caused when he saw one of his colleagues dropping liquor bottles on the floor and scooping the liquid and the shards of glass with his bare hands and drinking it. He has almost recovered but is still on medication. It has been 17 years since he got that illness.

Azmat (name changed), 31, is Haseena’s eldest and only son. He is being treated at the same hospital as his father’s for BPAD (Bipolar Affective Disorder).  “The year was 2013 and I was in the 4th semester of my Master’s in Arabic course at the University of Kashmir.  We used to live in our grandfather’s house where my uncles and their families also lived. All the families wanted to live separately but no one dared to confront my grandfather. As a result, the families often kept arguing among themselves as more and more disputes began to take form. I took it on myself to tell my grandfather as conditions in the house remained as toxic as before. For over a year I kept insisting him to allow the families to live separately to end all disputes, but he didn’t do anything about it. And that is where it all began and I got mentally disturbed,” Azmat explains.  For six months he was into aggression and lost the opportunity to sit in his 4th semester exams for two subjects to complete his post graduation. It was a faith healer, Azmat says, who with just one blow of his breath brought him back to normalcy.

“You could tell how aggressive I was from the fact that once I got late by five minutes for my exam and the professor in the hall rebuked me saying that one must not come late during his final exams. I told him that it was because of some domestic dispute, but he didn’t listen. Instead, he said, ‘You always do it and don’t listen to me’. I crumpled the paper and threw it in his direction. Being sick is not a problem, but becoming a social victim is,” he says further.

The faith healer’s treatment, however, only stayed effective for six months and Azmat began to experience restlessness and palpitations. He was then taken to a cardiologist whose prescribed medicines did help him somehow but the dosage was so high that he showed no signs of energy in him.

“Once the hem of my kameez was in a kangir (traditional Kashmiri firepot) and I could not remove it as I had no energy in me,” says Azmat. The doctor, afterwards, changed the dosage and Azmat continued to visit him for two years.

In 2016, Azmat says he experienced an ‘episode’, which means he was not aware of or worried about what was happening around him. He would leave his home early in the morning and come back in the evening. He experienced some strange happiness during that time. Then, again in 2018, a similar episode happened with him. “His beard had grown so much that it started curving upwards,” his mother tells me.

Azmat is now recovering and after being jobless for about two years, he now teaches Arabic at a privately-run school in his neighbourhood. He also completed his post graduation in 2017 after a gap of four years. Azmat counsels people whenever they seek his advice on certain mental issues. He says that a boy often calls him and tells him that he will commit suicide today. In fact, the boy, according to Azmat, went to Zaina Kadal once to jump off the bridge. Azmat always talks him out of these situations.

“Counselling centres should be established in every block. It takes too much time to reach a hospital and one is not sure whether he will get an appointment on that day or not,” Azmat tells me.

In 2019, Khurshid’s father, over 70, was also diagnosed with dementia and Haseena and Khurshid accompany him to the hospital whenever he has an appointment there. He sometimes lives with Khurshid’s brother and sometimes with him. The bifurcation of families is seen as the cause of his condition, according to Khurshid’s family. Haseena and her son washes him occasionally.

All this has taken a heavy toll on Haseena and her two young daughters, who had to quit their studies (then class 12 and class 10 students) because of what their family had been going through.

“These years have been very exhaustive and I have now reached a phase where I can’t even thread a needle. No matter how strong you are, misfortunes weaken you. But, one must not stop caring. Money does not matter as much in these circumstances as does one’s support. We suffered for the want of money a lot though. I have been rearing a cow to help my family. Otherwise, there is no strength left in me for this. Only because I couldn’t ask anyone to help,” says Haseena, crying again.

“I have seen people laugh and talk rudely about the persons with mental conditions. They call them ‘crazy’ and other names and even say that they are possessed. But it is none of these. It is like any other health condition. Situations like these need careful handling. You have to make sure that the medicine is given on time and you are there around all the time,” Haseena advises.

What the doctors say

Dr. Shabir, who is a Senior Resident at Government Psychiatric Diseases Hospital (IMHANS-K) in Srinagar, cautions that if a patient is exposed to what he termed as expressed emotions in which either the patient’s family members or the relatives comment or taunt him/her, there are high chances that such a patient will relapse. Apart from treatment, says the doctor, family and social support are the key factors that help a person with mental illness recover and prevent relapses.

Dr. Shabir also says that every sixth person in India is at least affected by one psychiatric illness and that among the many mental illnesses prevalent across the country, anxiety disorders are the most dominant constituting about 20-25%.

A survey conducted in late 2015 by Doctors Without Borders (MSF) in collaboration with the Department of Psychology (University of Kashmir) and the Institute of Mental Health and Neuroscience Kashmir (IMHANS-K) revealed that 45% of the population (nearly 1.8 million adults) in Kashmir show ‘some symptoms of significant mental distress’.

The decades-long conflict and heavy military presence across the region is also said to have psychological consequences on its people. A study showed that exposure to conflict in Kashmir played a significant role in “increasing the risk for PTSD symptoms”. Mental health professionals in the Valley, according to a recent report in The Hindu, have warned of (after a three-year-old boy was seen on a video describing how his grandfather was killed in Sopore) an “epidemic of psychological disorders among the children exposed to rare, complex, ongoing trauma due to the prolonged conflict in the region”. The report also quoted a doctor saying that many of the children seen at IMHANS-K over the year “talked about the presence of security personnel as a trigger for anxiety, irritability and anger”. Flashbacks and scary dreams were among other things about which the children told the doctors.

Given this scenario, it is incumbent on the government to do more in this field and make mental illness treatment accessible to all the affected, since many are afraid to seek medical help because of the taboo attached to the illness. It is also our responsibility as a society to treat people  with psychiatric illnesses with more respect and care.