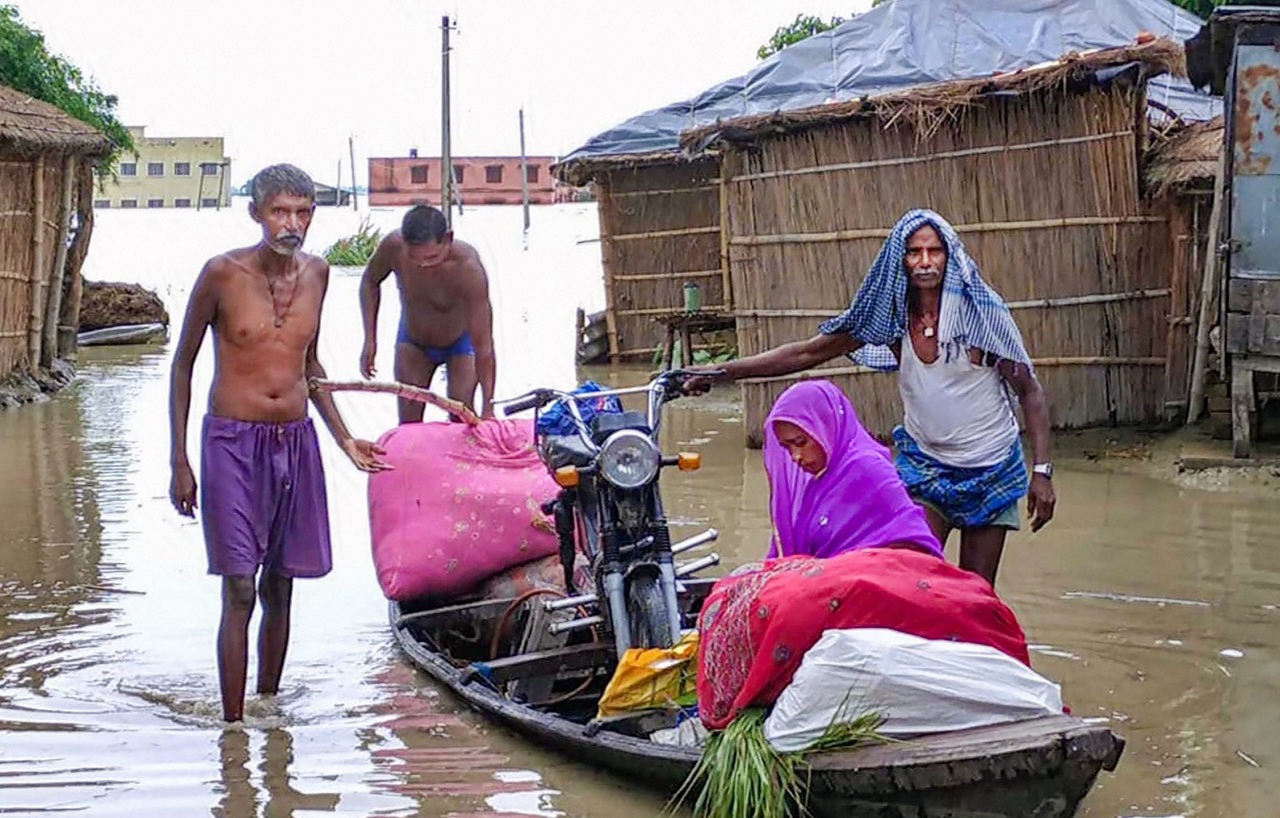 Bihar flood situation: No lesson learnt from the past

Bihar is battling on two fronts – the virus and the flood. Lives and livelihoods already battered by the forced lockdown to contain the virus are now being further devastated by the annual flood. Anish Ankur reports from Patna about the flood situation in the state. 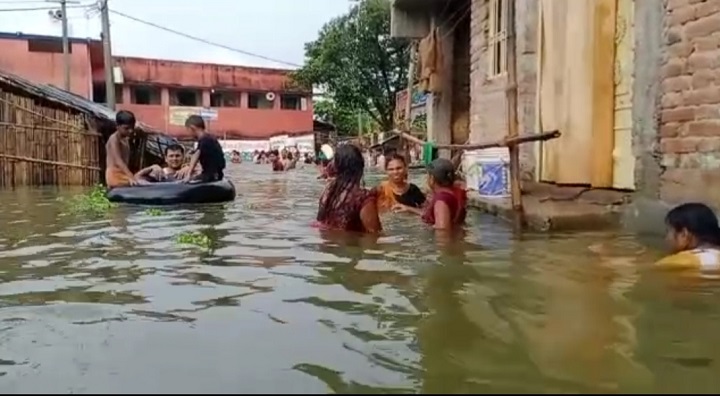 The fear of floods has begun haunting residents of Patna, the state capital of Bihar, after the river Ganga crossed the danger mark at Gandhi Ghat, Patna and Hadthidah at Mokama for the first time in this rainy season. The swollen river is flowing at almost the danger level at Kahalgaon in Bhagalpur and the water level is rising all along its course in the state. The Ganga has crossed the danger mark by 11 cm at Gandhi Ghat in Patna, 21 cm at Hathidah and by 18 cm at Kahalgaon. The Punpun, which flows from south of Patna, is already in a spate and has been flowing above the danger level for the last few days, forcing villagers along its embankments to move to safer places.

Bihar is considered to be the most flood affected state of India. Bihar shares 17.2 per cent of the total flood affected areas in the country. 28 out of 38 districts are flood affected in Bihar. 21 out of these 28 districts are situated in north Bihar. Most of the rivers in north Bihar, like Koshi, Gandak, Bagmati, Kamla, Budhi Gandak, originate in Nepal. They are the prime cause of floods in Bihar. As per a bulletin issued by the state Water Resource Department  “The water level of the river increases by 5-24 cm in Buxar, Munger, Bhagalpur (Kahalgaon) and Patna (Dighaghat).This is the first time during this season that the Ganga breached the danger mark in the state capital. The water level is expected to rise in the coming days.”

Vehicular traffic to various towns in North Bihar remained disrupted for almost a month since floodwaters from different rivers breached the safety embankment at different places and inundated a vast stretch of plains. As per reports from the Road Construction Department (RCD), vehicular movement has been completely snapped on 25 roads; they have been partially or badly damaged.

Agricultural land has been inundated and standing crops damaged due to flood water. According to agriculture minister Prem Kumar “More than 8 lakh hectares of agricultural land and standing crop of over 2.60 lakh hectares in 16 districts are said to have been destroyed due to continued floods. Crop worth of 352 crore has perished in floods.” He said that assessment was being done to compensate the farmers for crop loss.

The Bihar government rushed in with relief measures. As of August 20, there are 443 operational community kitchens in which 3, 25,610 flood victims are being fed in the state, as informed by the State DMD. However, there are only 6 flood relief camps for 8,179,257 flood-affected people. Out of these six relief camps, five are in Samastipur and one in Khagaria. It looks strange that there is not a single relief camp in the worst affected districts like Darbhanga, Muzaffarpur and East Champaran. Only 5,186 people have found shelter in these camps, indicating a vast proportion of the flood-hit population has been left to fend for themselves. So far 5.50 lakh people have been evacuated by 33 teams (NDRF-20+ SDRF-13) of the disaster response forces and 3 teams of the Air force (Helicopter). Around three thousand boats have also been roped in for the evacuation process. Bihar government provides six thousand rupee to every flood victim family. This year, according to DMD, 7 lakh families have received the payment. Bihar government is getting rid of its duties just by paying only six thousand rupees to the flood victims.

The Bihar government has blamed Nepal for the flood. Chief Minister Nitish Kumar had raised the issues of non-co-operation from Nepal in repair and maintenance of embankment on rivers originating from Himalyan region in the CMs’ meeting with Prime Minister Narendra Modi recently. Since Bihar is going into election later this year, the Bihar government is trying to shift the blame on others. But opposition political parties have started putting the Nitish government in the dock for its apathy towards the flood victims. Leader of opposition, Tejasvi Yadav, alleged “More than 8 million people of 16 districts are compelled to lead miserable lives as the government relief is not reaching them. Most of them have been living in temporary shelters after their houses were submerged due to flood waters.”

Bihar flood situation is an annual affair and after some token relief measures things get back to normal. So much has been written and talked in the past about the flood situation but it seems nothing substantial has changed along these years. 2020 is the twelfth year of the great ‘Kushaha flood tragedy’ August in 2008, when 40 lakh people were severely affected in one of the worst floods in the state’s history. It seems NDA government has not taken any lesson from that 2008 tragedy and therefore the state is undergoing the same agony every year.

Recalling that tragedy, social activist Mahendra Yadav, who has been very active in Kosi area since 2008 flood, said “Kushsha tragedy was announced as a national disaster. It was a man-made disaster but no one was held accountable for the tragedy. I still recall the horror of the flood before my eyes. Hundreds of human lives and livestock had been swept away, thousands of houses and vast swathe of standing crop were destroyed, child and mother fallen apart, families were separated. The biggest problem at that time was that people didn’t have anything to eat. Whatever grain poor people had stored was washed away in the devastating flood. The entire system had collapsed at that time. Even after many days of flooding, the administration was simply absent. Only when some media persons reported about the flood then some relief, although inadequate, reached.” Mahendra Yadav further added “Bihar government formed ‘Walia commission’ for this purpose. The commission gave its report, although, it was not very satisfactory, the Nitish government did not implement the recommendations of that commission.”

The 2020 flood scenario is no different from 2008. Every year the same phenomenon is being repeated again and again. Government officials will boast that relief materials are being distributed at so many places but if you go there nothing could be found. As of now everyone knows that flood and relief is a golden opportunity for money making by government officials and politicians. 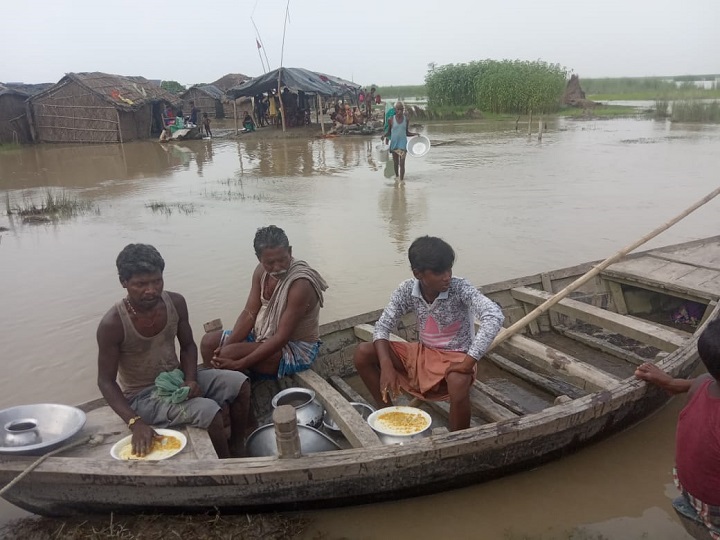 According to Sandeep, president of ‘Koshi NavNirman Manch’, a forum which regularly raises the issues of flood victims “At that time chief minister had promised ‘there will be a better Koshi’. We were very hopeful. But despite a time of 12 years nothing has happened. All the damaged houses, roads and bridges are still to be repaired. The bridge that was destroyed in 2008 is still not constructed despite the World Bank giving loans twice for this purpose. In fact there is lack of will on the part of the state government. Even after the intervention of the Chief Justice nothing happened. At that time it was reported that 5000 flood victims were being fed but there was no such arrangement on the ground.”

This year, for the past one month, flood victims have been living on the roads or dams. Some experts have predicted that the situation will remain grim till October. Why will flood water remain for so much time? Social activist Jaipraksh said “In the name of development natural drainage system of flood water has been stopped. Earlier flood water used to flow from Shivahar submerging Sitamarhi, Muzaffarpur, Darbhanga, Samastipur and Khagadiya, and the water used to fall into the river Ganges, the damage was done for a month and after that everything became normal. But what has happened this time? The height of the dam and roads has increased. The result is the embankment has survived but the flood water is still spread over in millions of acres of land because there is no way for the water to flow out. Go on the Samastipur-Darbhanga road, go on the Darbhanga-Muzaffarpur four lane, you will find a sea like scene there. All agricultural land and standing crops and everything has turned into a waste now.” 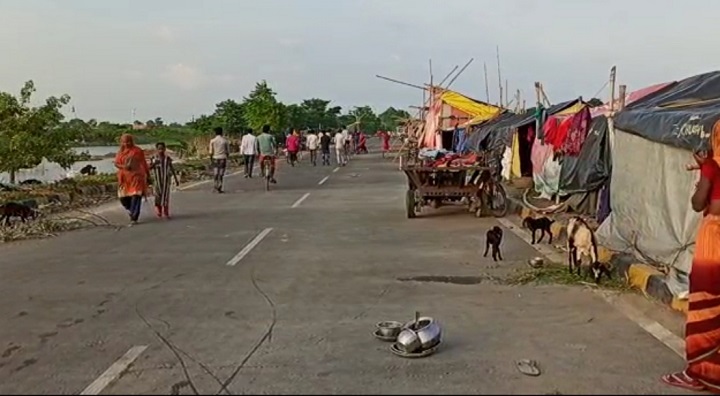 The state government for the first time has started using artificial intelligence (AI) early warning system developed by Patna-based Flood Improvement Support Centre. The centre has developed a flood forecast model with a 72 –hour lead time for rivers originating in Nepal including Gandak, Bagmati-Adhwara, Kamla, Kosi and Mahananda. Bihar Water Resource Minister Sanjay Jha claimed because of the use of this early warning system, local administrations got ample time to rescue people to safer places. This has reduced fold-related fatalities this year, he said. Bihar government has recently launched a mobile app “ Hello WRD” and a toll free number 1800-3456-145, which will protect people from flood as well as provide relevant information to them.

Bihar is battling on two fronts; one is Corona pandemic while another is the flood. The pandemic is being handled by the health department and flood related issues by the water resource department. But the seriousness of the Nitish government can be understood from the simple fact that administratively this entire two-front battle is being monitored by a single man, Pratyaya Amrit, who is the principal secretary of both the departments.