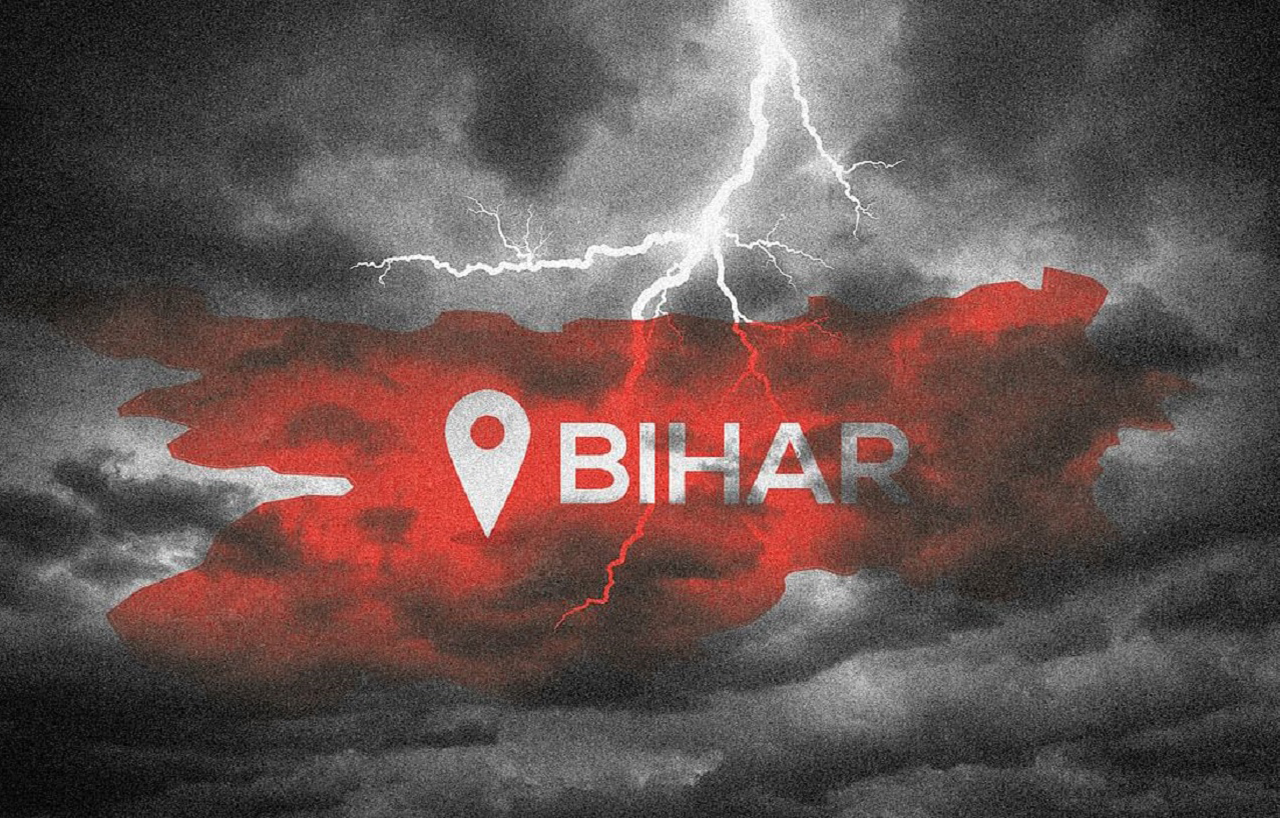 On 25 June, 100 people were killed by lightning strikes across 24 districts. Gopalganj district of north Bihar was the worst hit which saw the deaths of 13 people in one day. Most of the victims were peasants and agricultural workers who were working in open fields. Bihar’s chief minister Nitish Kumar announced an ex gratia payment of Rs. 4 lakh to each of the next of kin of the deceased. Early monsoon, changing weather conditions, lack of irrigation facilities and dependency on rain for paddy cultivation were also the reasons for so many deaths. Although the state government is urging people to download Indravajra app to get early warnings for lightning threats, given the low density of smartphones especially among rural areas it is not very useful or affordable for poor farmers.

The stories are numerous. When a fifteen year old girl was going to give an umbrella to her father working in the field, lightning struck her and she died on the spot. Another 12 year old girl named Sonam had gone to bring firewood for her home when she died, and another boy named Ankit died when he was playing outside. Some children died during cattle grazing while some died when going to bring fodder for cattle.

Sotilal Mandal and his wife Udhuliya Devi had gone to their field for paddy transplantation when lightning struck them. Gulab Mandal and his wife Punam Devi of Supaul met the same fate and died on the agricultural field itself. They left behind them their old and ailing mother who now would have to look after her four year old grandson and one-and-a-half year old granddaughter. Dipu Ram of West Champaran had returned from Allahabad during lockdown, he was working there as an electrician. He was trying to earn his livelihood by working on others’ fields but here he became the victim of a lightning strike. Lightning not only took his life but left his family hanging in balance. Countless such tragic stories are coming from several districts of Bihar.

Alongside men and women, cattle have also died because they were under the open sky hence were the easy target. A shepherd lost his 16 goats but he will not be compensated for that because according to government rules only milch-cattle are eligible for compensation.

Since Bihar is predominantly an agricultural society, the risk of being struck by lightning is much higher here. A large number of people including farmers who may be standing in water, forest-produce gatherers, pastoral and other nomads, and destitute and homeless people are likely to be away from shelter and caught in rainstorms.

Despite the regular warning and alert of the Meteorological Department for heavy rain and thunderstorms, almost every day people were falling prey to lightning due to the rainy season. Every year in Bihar lightning takes the life of rural folk. Last year 170 people died of lightning strikes in Bihar. There has been an alarming increase in lightning related deaths in the last few years. But this year has surpassed all the previous records. 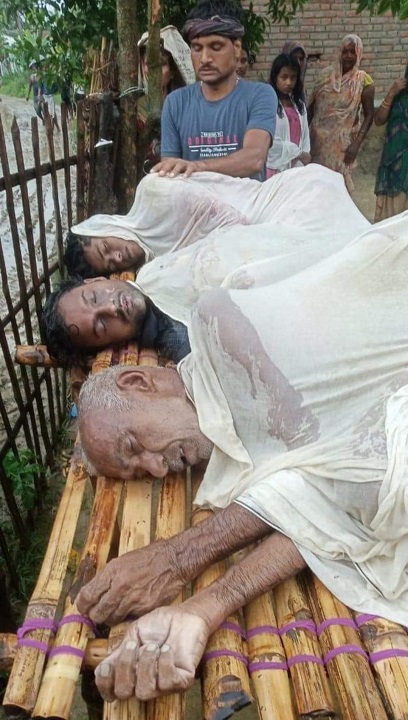 An official of the Disaster Management Department has said that according to information received from the districts, heavy rain with thunderstorms and lightning have affected various parts of Bihar even before the onset of the monsoon in the state. Bihar is especially prone to death by lightning strikes this time of the year during the heavy monsoon season. However, this year’s intensity of lightning strikes has been more severe than normal. Bihar has received 66% excess rains from June 1 to July 2 with 77% excess rains in the week of June 24 to July 1.

“I analyzed the data of lightning related deaths. Disaster management didn’t update its website after 4 July but newspapers have reported several more deaths and according to a conservative estimate this number crossed [the] two hundred mark.”

“After many years [the] state was witnessing rain in June. Since there are no irrigation facilities therefore when farmers saw clouds and rain they thought it was an opportune moment to do paddy transplantation otherwise they will have to pay for diesel and pump sets to irrigate their land. Therefore they hastily went outside in the field to utilize this good opportunity. Most of the returned migrants might be thinking that after finishing off the paddy cultivation they will return to work outside Bihar.”

A lot of people were killed under trees also. They went there for shelter from rain and in some cases in search of Mango fruit also. According to social activist Vinit Rai of Gopalganj district which witnessed many deaths,

“The summer and rainy season is the time of Mango fruit. A lot of people died under mango trees also. In the orchard usually people not only take shelter but they go there to collect the fallen Mango whenever they see wind and rain. This year monsoon came a little earlier therefore most of the mangoes are still on the tree hence farmers stay there to pluck and protect the Mango. Here lightning took their life.”

An appeal had been made by the government to the people to remain indoors during the rain and not to stand under trees if outside.

Lightning strikes trees more frequently. A slide flash occurs when lightning strikes a nearby tall object, such as a tree, and then jumps from tree to human. This happens when a person is within 2 feet or so of the tree, typically because they are taking shelter underneath it against the rain or storm. According to data of Indian Institute of Tropical Meteorology (IITM) in India more than 70 % people get killed by lightning when they take shelter below trees during rain.

The State Disaster Management Department (DMD) has once again urged people in the state to download the ‘Indravajra’ mobile app for lightning strike warnings. The Indravajra app was introduced by the DMD to warn people that an area could be hit by lightning. The Disaster Management Department had introduced the early warning system with the help of US-based Earth Networks by signing an MOU in August 2019. It had also entered into a pact with Bangalore-based Qihou Solutions for early alerts through the app. The app issues lightning strike warnings at least 40 minutes before their occurrence. The app will forecast a lightning event within a 20 km area. IITM (Pune) has developed a mobile app called ‘Damini’ for the Bihar government’s use.

Changing climate conditions is one of the important factors causing an increase in the number of lightning strikes. Environmentalist Bharat Gogra explained

Some experts like Anand Shankar, a meteorologist at the Patna centre of Indian Meteorological Department (IMD), are blaming ‘Madden-Julian Oscillation’, a phenomenon that explains the increase of lightning strikes. MJO is an oceanic and atmospheric phenomenon, which has a major impact on the weather patterns of tropical regions. Anand Shankar stated “After studying the current weather patterns, we have found that recent events are occurring due to the Madden-Julian Oscillation (MJO) phenomenon.”

But the Bihar government’s preparedness does not match the gravity of the situation. The government’s entire focus is on fighting Covid-19 at this time, but lightning strikes took more lives than the coronavirus. By launching an app for early warnings, the government thought its duty was over. In addition to the app, if the government had campaigned in rural areas through PRI institutions about climate change and helped make farmers less dependent on rain for irrigation these lives could have been saved. But it requires a change of policy direction with rural people at the centre of development. The Bihar government does not seem to be interested in doing that.