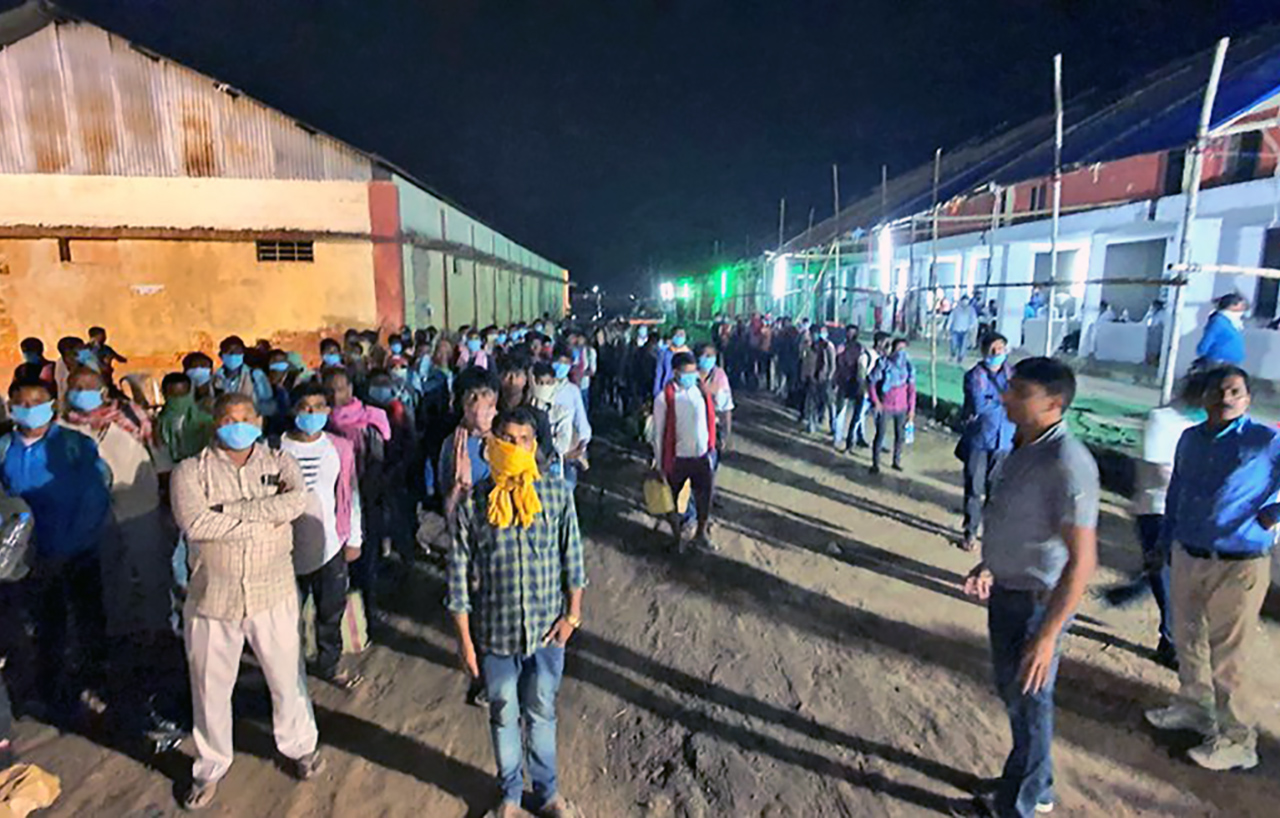 Migrant workers from Bihar, who recently returned to their native place during the nation-wide lockdown after enduring much suffering, pain, and anguish, are once again planning to travel back to the place of their work. These workers are being lured by agents and brokers of factory managers from Punjab, Haryana, and other states. Meanwhile, the Bihar government’s efforts to keep them within the state are not bearing any fruit, reports Anish Ankur from Patna.

Just a month ago, the entire world witnessed the trauma inflicted on migrant workers, who after the announcement of the lockdown, and in the absence of a source of income, were forced to return to their villages, often having to travel hundreds of kilometres on foot, by cart, or on bicycle. The suffering of the migrant workers was seared into the public imagination when the stories of fifteen year-old girl Jyoti Kumari and eleven year-old boy Tabarak broke. Jyoti had to cover the long distance from Gurugram (Haryana) to Darbhanga (Bihar), carrying her ailing father on the back seat of a bicycle, while Tabarak carried his injured father from Varanasi (UP) to Araria (Bihar). Jyoti’s story caught worldwide attention. And how can we forget the tragic video of the 35 year-old deceased migrant woman lying at Muzaffarpur station and while her baby is trying to wake her up by pulling the sheet that covers her? There are countless such harrowing stories of migrant workers that need to be documented. Barely a month has passed since these stories first broke, and the ‘migration’ had started once again.

According to Bihar’s public relations department, around 2.5 million workers have returned to the state since May 1, when the Shramik trains started, and of these, only 2.5 lakh came during the first two weeks of June. Most of the workers came from industrial centres like Surat (Gujarat), Ahmedabad (Gujarat), Mumbai (Maharashtra), Pune (Maharashtra), Delhi, Ghaziabad (UP), Faridabad (UP), Gurugram (UP), Noida (UP), Kolkata (West Bengal), Bengaluru (Karnataka).

Bihar’s Chief Minister Nitish Kumar has directed state officials to ensure the availability of labour intensive work in order to create job opportunities in the state for the migrant workers. The Bihar government even conducted a survey of these migrant labourers returning to Bihar and prepared a database of skilled and unskilled labourers to create employment opportunities for them. For the skill profiling of migrant workers, the state government engaged ‘Jeevika’ for the purpose. Nitish Kumar has demanded permission from the central government for six crore human labour-days and an extension of the employment guarantee scheme from one hundred days to two hundred days. The government has transferred Rs. 1000 and three month’s ration to migrant workers. But it seems these measures are not enough to hold them back in Bihar. Although arrangements for return of a batch of migrant labourers was done by state government itself during the second phase of the lockdown, when two hundred and twenty two workers left Khagaria to Telangana for work in a rice mill, and a special train was arranged for this purpose.

Despite the Bihar government’s repeated assurances of job opportunities, migrant workers quite simply do not believe these assurances. Local middlemen and contractors have become active in some villages to lure migrants on the assurance of a higher payment than before. These agents are offering better salaries and service conditions to these migrant workers.  For the last two weeks, luxury buses have been carrying workers from different districts of Bihar to the industrial cities. Meghnath of Bochahan block falling under Muzaffarpur district said “A local broker came to meet me and offered a monthly salary of eleven thousand while earlier I used to get nine thousand rupee only.”

Residents of Purnea, Mohd Imran and Faiyaz, who left for Haryana said:

“We cannot afford to let go of our jobs because of the pandemic. Our employer has been calling us back since we returned around a month ago. They have assured us that we would make one-and-a half times more in a month than we used to earn earlier. Previously we used to earn Rs 500 and Rs 700 daily for our work. But now our employer has promised to pay between Rs 20,000 and Rs 30,000 a month.”

Most of these migrants are returning to Punjab also. The main reason for migrants going back is the season of paddy cultivation in Punjab and Haryana. The farmers of these states need migrant labour. They are promising wages three times higher than usual. Chandreshwar Das, a ‘mukhiya’ of  the Bhangra Panchayat under Meenapur block asked “How could these migrants refuse such alluring offers? Earlier they were paying Rs 4,000 per acre for sowing paddy but now they are promising Rs 12,000 for the same work along with travel cost.”

Migrant workers returning back from Bihar to work outside.

Migrant workers are mostly daily wage earners. They cannot afford to go without work even for a month. Most of them are indebted. Going without work means their debts to moneylenders will keep rising. Twenty five labourers left for Punjab from Kodaria village of Meenapur block. One such labourer, Umesh Ram, told GroundXero: “I am under burden of debt of twenty five thousand [rupees] to a local Sahukar (money lender), therefore to repay it, I have to go again outside Bihar for work.”

Difference in wage is one of the main factors behind workers leaving their native places. Here, in addition to job uncertainty, the wage difference is also an important factor. In Bihar, MNREGA wage is just Rs. 202 per day after an increment of Rs 20, while in other states, they earn a minimum of Rs 500 daily. The Bihar government has not been able to bridge this gap in wage difference. Over and above the wage difference, rampant corruption is another added factor that makes workers suspicious of the state administration. Whatever little benefits that exist for the workers are grabbed by local government officials. The migrant workers experienced this during their harrowing stay in quarantine centres.

Social activist Pankaj Kumar narrated the story of corruption of a quarantine centre in West Champaran:

“The quarantined workers, who are staying at isolation centres for fourteen days, were allocated Rs. 535 for a single kit, which consists of a bucket, towel, mosquito net etc. But the Block Development Officer (BDO) cut [from this] a commission of Rs. 150… These administrative officials are like dacoits, but even dacoits would not have been insensitive to such an extent that they will rob the tired, hungry and devastated labourers.” 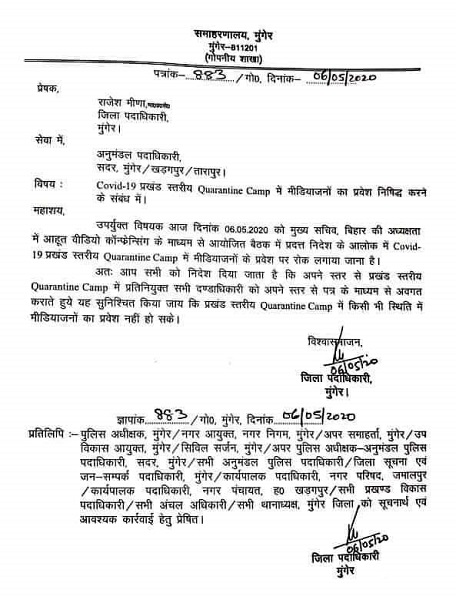 The Bihar government is saying that they have distributed free food grains among migrant workers for three months but this is not enough to make them stay back. As a daily wage worker of Bhagalpur, Dipak Mandal commented “Only rice and wheat is not sufficient. Do our leaders and administrative officials don’t need vegetables, milk for their children?”  D.M Diwakar, former director of A N Sinha Research Institute, reiterated the same point “Question was not of food grains only, they needed vegetables, milk, etc, and other necessary supplements for preparation of their food, for example, edible oils, spices, sugar, tea and many other things from the markets. They also had to pay rents, electricity bills and water charges, fees of school children, etc. Hence they needed money in their pockets immediately. In absence of these measures, simply 5 kg of food grains are not enough to keep migrants to stay back.”

“Due to serious financial economic challenges, all of them are tense and in problem. Despite the efforts of the state government, there is less possibility to get all of them required employment. As a result of this, they may indulge in unlawful activities to feed themselves and their families. For this reason, the migrant labourers may be involved in unethical and illegal activities for the purpose of maintaining themselves and their families. It can have an adverse impact on law and order.” 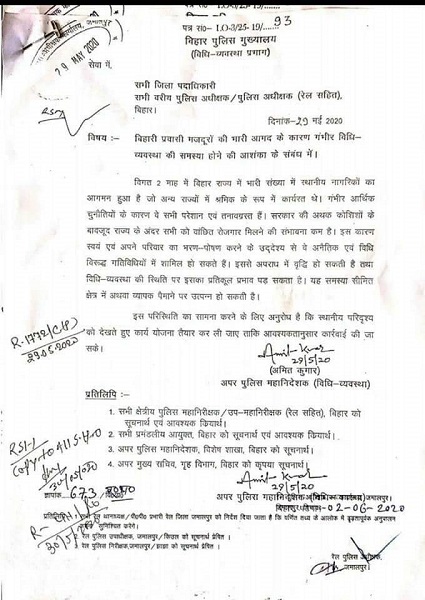 The controversial letter issued on 29th May by ADG (Law and order) Amit Kumar to all SPs.

The letter had to be withdrawn after political pressure was mounted by opposition parties. In a face saving cover up, Bihar DGP Gupteshwar Pandey, termed it as an “error of judgement”.

Meanwhile, the Railway Ministry has reduced the number of its Shramik Special trains as the demand from the states went down. From June 15, block quarantine centres for returning migrants workers have been closed by the state government. Bihar will face assembly elections this year, hence, political parties are busy gearing up for that. Amit Shah, Union Home Minister, sounded the poll bell by addressing BJP’s virtual rally for Bihar. Migrant workers have, however, understood that political leaders will be busy for election, therefore, it is better to move on to their places of earlier work. Only a month back, braving all odds, they had returned to their homeland, but they are once again on the move.