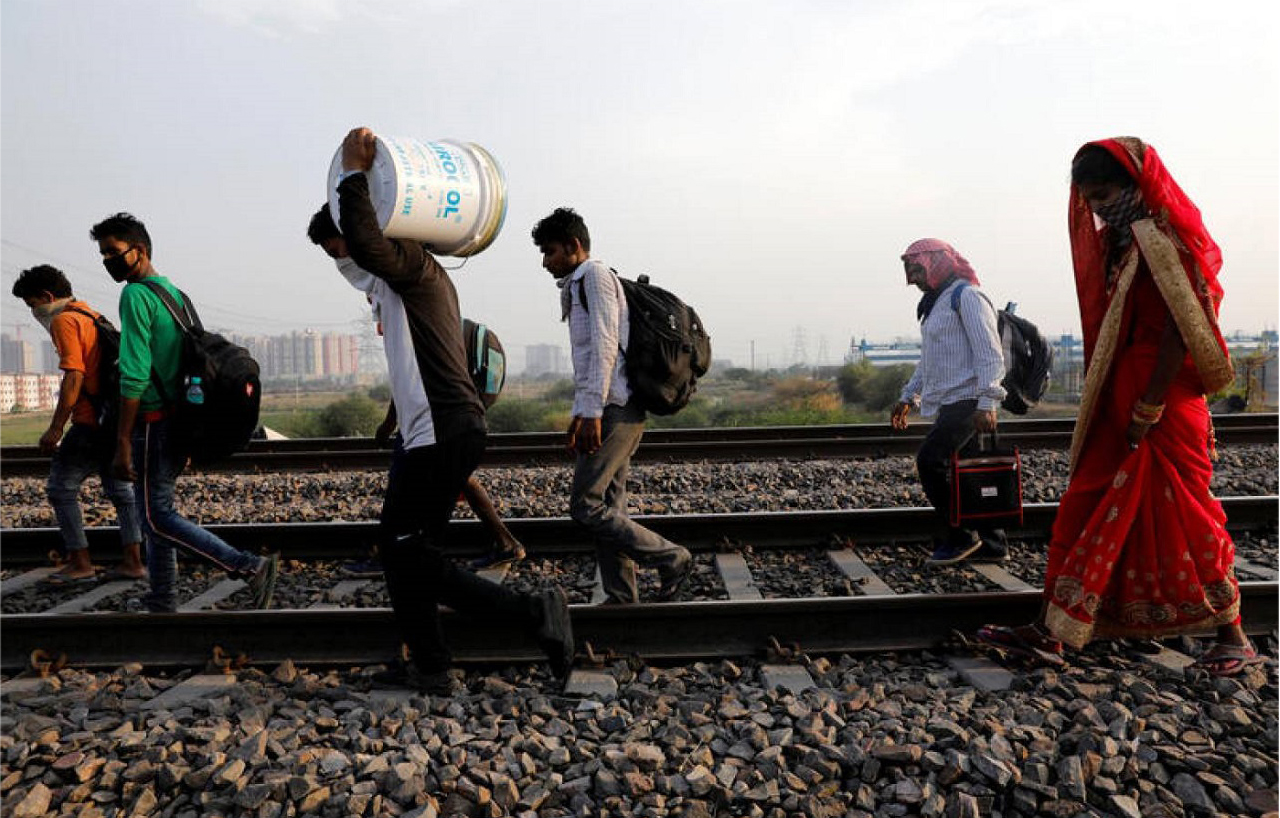 Millions of migrant workers in India are walking miles under the searing sun to reach their home during the lockdown. This is certainly one of the most lamentable humanitarian crises the modern world has witnessed. The failure of the Supreme Court of India (SC) to step in and secure for its citizens their basic human rights is traumatic not only for the migrant workers but also for the rich history of following the path of constitutionalism by the Judicial System of India, writes Soham Banerjee.

The intervention of the Supreme Court was sought through Public Interest Litigations (PIL) bought before it concerning several issues relating to migrant workers. Justice Bhagwati has described the goal of PIL in India as endeavouring to counter “state repression, governmental lawlessness, administrative deviance, and exploitation of disadvantaged groups and denial to them of their rights and entitlements.”

However, the response of the Supreme Court of India was very passive and insensitive in case of the Public Interest Litigations which were filed regarding the migrant workers’ crisis. The Supreme Court casually dismissed most of those matters without any effective orders, in most cases, unquestioningly believing the version of the executive. This indicates a clear approach from the Supreme Court that the government is doing what is needed, in other words, ‘trust your government.’ This approach flows against the very idea of constitutionalism.

The obliviousness of the Supreme Court of India became obvious when the it took suo moto cognizance of the migrant workers crisis and passed a direction saying that no train or bus fare shall be charged for migrant workers, after disposing of a PIL filed by Jagdeep Chokker, solely on the basis of the version of the executive that all necessary steps are being taken by the Centre and the States. During the hearing of another PIL, being WP(C) No. 468/2020, seeking the Supreme Court’s indulgence towards the plight of migrant workers, the Solicitor General of India, on instruction, had made a statement on 31.03.2020 that there is no person walking on the roads in an attempt to reach his/her home towns/villages. A bench comprising Chief Justice of India S A Bobde and Justice L Nageswara Rao, by an order dated 31.03.2020, observed, “The migration of large number of labourers working in the cities was triggered by panic created by fake news that the lock down would continue for more than three months. Such panic driven migration has caused untold suffering to those who believed and acted on such news. In fact, some have lost their lives in the process.” It is disappointing that the SC was not even bothered enough to consider other socio-economic factors of a mass exodus of the workers. Later on 08.05.2020, when some migrant workers were killed by a train while walking towards their home following the rail line, an application for urgent interim directions was filed by the petitioner Alakh Alok Srivastava, praying for a direction upon the District Magistrate to immediately identify moving and stranded migrant workers and to provide them shelter, food, water and medicines. While dismissing the application, Justice L Nageswara Rao, while leading the bench comprising Justice S K Kaul and B R Gavai with him, observed, “How can we stop them from walking?”, without properly indulging into the process of finding out the reason for them walking.

In 1983, the Supreme Court itself, in Bandhua Mukti Morcha vs. Union of India, said that, “When the poor come before the Court, particularly for enforcement of their fundamental rights, it is necessary to depart from the adversarial procedure and to evolve a new procedure which will make it possible for the poor and the weak to bring the necessary material  before the court  for  the purpose  of securing enforcement of their fundamental rights. If the adversarial procedure is truly followed in their case, they would never be able to enforce their fundamental rights and the result would be nothing but a mockery of the Constitution.” It was further pointed out that Public Interest Litigation is not in the nature of adversary litigation but is a challenge and an opportunity to the Government and its officers to make basic human rights meaningful to the deprived and vulnerable sections of the community and to assure the social and economic justice which is the basic motive of the Constitution. Hence, the Court, in case of Public Interest Litigations, should compel the Government to make basic human rights meaningful and supervise the same. The Supreme Court has failed miserably in this aspect.

However, the Supreme Court took suo moto cognizance of the migrant workers situation on 26.05.2020 i.e. after two long months, and that too only after strong criticisms by the members of legal fraternity as well as common netizens. During that period we have witnessed a child, too exhausted to walk, being dragged by his mother as he sleeps on a suitcase; we have witnessed migrant workers getting killed by train; we have seen the heart wrenching video of a toddler trying to wake his dead mother up in a railway station. In my opinion, for these two months hardships of the migrant workers were neglected, deaths of the migrant workers were trivialized by the Supreme Court of India. Migrant workers form the largest part of India’s vast unorganized work sector. They already face the exploitative labour arrangements that force them to work in low-end, low-value, hazardous work. Now the lack of legal protection accentuates their misery. The judiciary should have intervened in the early days of lockdown as the Supreme Court has the power to scrutinise the executive actions and inactions towards the people.

The Supreme Court of India has a history of being the most active court when it comes to the matter of protection of Human Rights. The Indian Judiciary has, through judicial activism, devised new remedies for the purpose of vindicating human rights. This heritage must be put forward in the present situation, by the present judges. It must be remembered that the Supreme Court of India, in P.N. Duda vs V. P. Shiv Shankar & Others, observed, “Judges have their accountability to the society and their accountability must be judged by their conscience and oath of their office that is to defend and uphold the Constitution and the laws without fear and favour.” Let us hope that the belated attempt of the Supreme Court to get back on the right track by taking suo moto cognizance of the migrant worker situation leads to a fruitful solution. The poor people of India still have faith in the Judicial System; the Supreme Court of India must be independent and strong enough to ensure that it stays the same.

The author is an advocate at Calcutta High Court.

(The views and opinions expressed in the article are author’s own.)