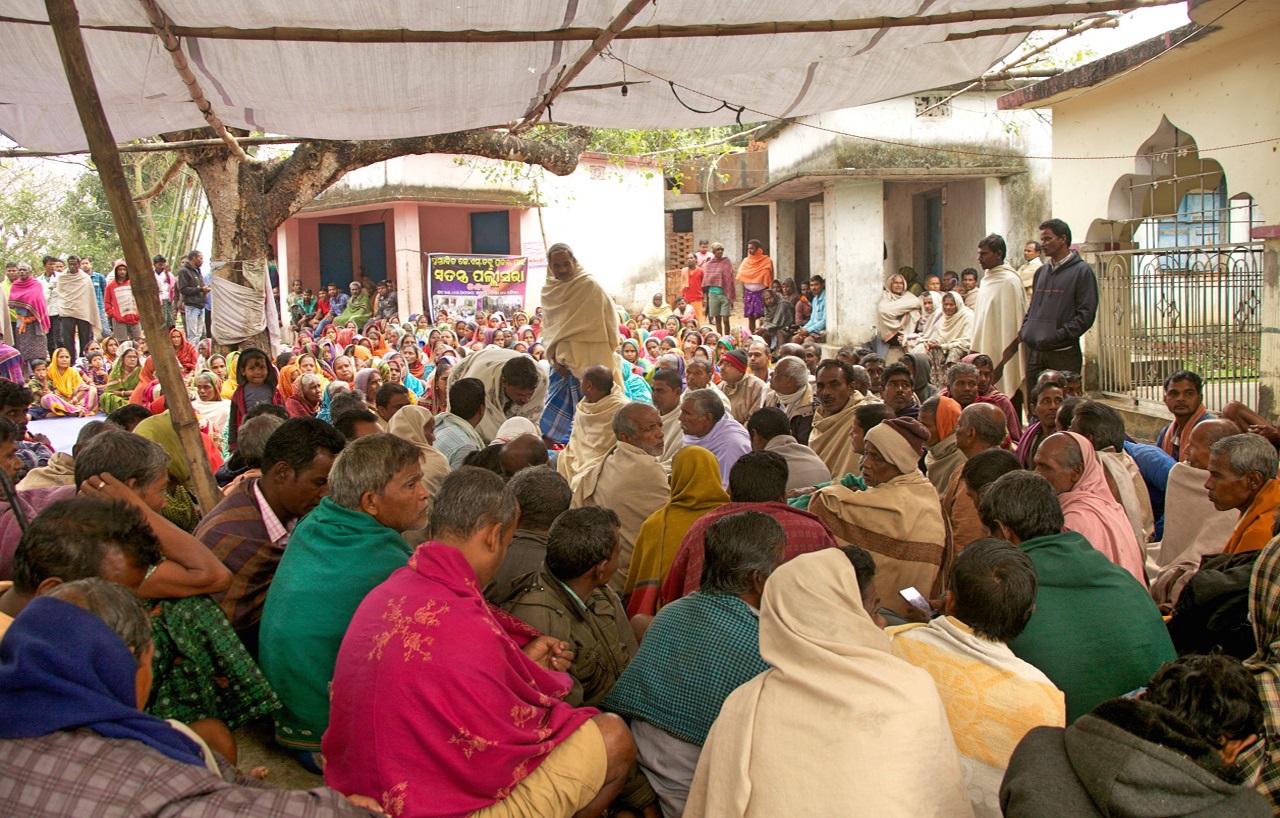 Despite the Covid-19 pandemic and super cyclone Amphan, the district administration of Jagatsingpur in Odisha, is busy hatching new conspiracies to usurp the land of the people of Dhinkia Charidesh. Recently, forms has been circulated in the villages of the three Panchayats of Dhinkia, Nuaagaa and Gada Kujang by the administration, where the people have to sign on a statement, giving their names and addresses along with the area of land under betel leaf cultivation.

The form that is originally in Odia language, roughly translates to –

‘Due to the Covid-19 pandemic our betel vineyards are no longer viable and we are no longer interested to continue with it. That’s why we are appealing to the Lord (Huzoor) to demolish our vineyards and provide compensation worth Rs. 25,000 per decimal. We also want to state that we are in support of the proposed JSW factory and port.’ 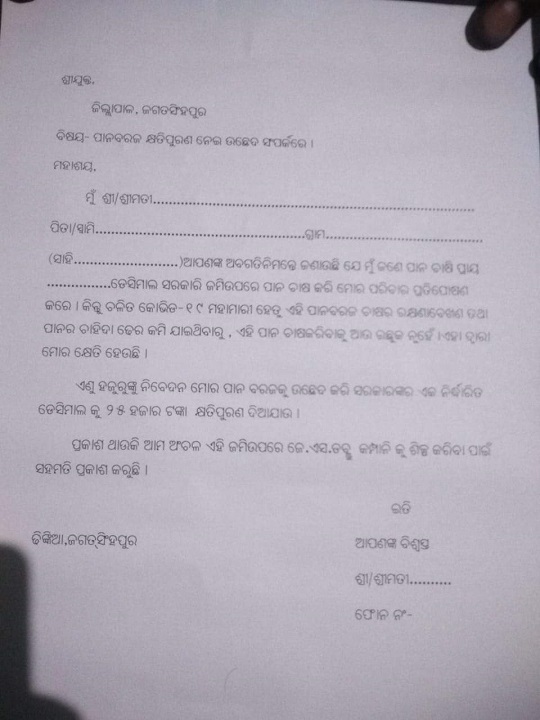 Photocopy of the form

This is the shocking response of the state government after the people of Dhinkia demanded for a relief package to be announced for all betel leaf vineyard owners of Odisha, adversely impacted by the ongoing lockdown that has put a near complete halt to betel leaf trade. The families engaged in betel leaf cultivation in the region have incurred heavy losses during the lockdown period and this was further aggravated by the recent super cyclone Amphan, which flattened most of the vineyards.

It is an obscene display of feudalism by the bureaucracy when it refers to itself as ‘Huzoor’. It is clearly another ploy by the district administration led by the Collector, Sangram Mahapatra, who had earlier assaulted the people of Dhinkia Charidesh during forceful evictions for the Posco project, and as Collector had presided over a biased Public Hearing.

The JSW Utkal project comprising of an integrated 13.2 MTPA steel plant, a 10 MTPA cement grinding unit, a 900 MW captive power plant, an all weather, multi cargo, green field, captive jetties with a handling capacity of 52 MTPA at Jatadhari creek, and a huge township is being proposed to be set up at the same site where the South Korean POSCO steel plant and captive port was initially proposed1. The project had led to more than a decade long conflict between the villagers and the Government with several instances of violent attacks by the police and mining mafia, leading to the death of at least four community members and had left hundreds of people, including senior citizens, critically injured.

This recent move by the district administration of distributing such forms has no legal basis. Surprisingly, the forms do not have insignia or stamp of any Government Department, so that it can be traced back to where and who issued it. Moreover, it amounts to governmental blackmail, forcing people to give false statements that betel cultivation is no longer viable and that they want to give it up so that the JSW project can be setup there if they want to be compensated for the loss and damage caused by COVID19 lockdown and super cyclone Amphan. The district administration is trying to undermine the Palli Sabha resolution2 passed in February at Dhinkia where villagers unanimously opposed the project.

“It is entirely a conspiracy by the Govt. & JSW. The people of Dhinkia Charidesh have opposed this form and refused to sign it but the district administration is pushing, pressurizing and influencing people to do so. We condemn this, because for the Dhinkia Charidesh people, these betel vineyards and fishing has been the mainstay of livelihood for hundreds of years. The people here are determined to continue this fight against JSW till the withdrawal of the project.”

The BJD (Biju Janata Dal) led Odisha Government is often glorified for its efficiency in disaster management, and more recently, for extending support to the neighbouring state of West Bengal, in the aftermath of the super cyclone. If we analyze the disaster management history of the present government, then a few things come across clearly, the BJD came to power after the Super cyclone in 1999 devastated several districts of coastal Odisha claiming more than 10,000 lives. The super cyclone taught the people of Odisha how to deal with cyclones better, and fortunately, no other cyclone as severe as that one has struck the state ever since, although, severe cyclonic storms occur every 2-3 years. The Odisha Government is claiming credit for the collective common sense that developed after the ’99 super cyclone.

The Odisha Government needs to be held responsible for being instrumental in the destruction of coastal forests, mangroves, water-bodies, estuaries, sandbanks that provide natural and irreplaceable protection from storm surges. The several proposed ports and the existing ones at Paradip, Gopalpur and Dhamra are only meant to serve mining interests but these have made the entire coast vulnerable to rising sea levels, erosion, and cyclonic storms, thus putting the lives of millions in great peril. As if that were not enough, the government even wants to clear mangroves and coastal forests for tourism projects like Shamuka in Puri.

The untold truth of the BJD is that it came to power when people were still in a state of shock after the losing thousands of lives to the super cyclone of 1999. Thousands of people were rendered homeless, entire families perished in the killer storm, and people had lost nearly everything they owned. The corrupt Congress government became hugely unpopular, and with no other alternative political party to replace it, the Biju Janta Dal just sneaked in to power in alliance with the BJP (Bharatiya Janata Dal). By the end of its first term, the government hatched ‘developmental’ plans for one of the worst affected regions during the 99 cyclone – setting up of the giant POSCO project in the same area.

The POSCO project was announced just five and half years after the Super Cyclone and faced immediate and widespread resistance. It was what now seems like a typical characteristic of the BJD, to dispossess and displace people when they are most vulnerable. It bullies people of Dhinkia Charidesh with batons and bullets to give up land for POSCO when they are still to recover fully from the super cyclone, it forcefully bulldozes villages in Kalahandi for Vedanta citing instances of drought and starvation deaths, it announces the discovery of bauxite reserves in Kandhamaal right after the right-wing Hindutva groups carries out an anti-Christian pogrom, and it announces big ticket industrial projects in Malkangiri where hundreds of children were dying of Japanese Encephalitis and malnutrition.

The reality of the Naveen Patnaik led BJD government is that while it is applauded in the mainstream media for effectively tackling natural disasters, it is nothing more than an land acquisition agent for the Industrialists, and will hatch cruel conspiracies and unleash brutal violence to serve its capitalist masters.

The author is a filmmaker-activist from Odisha.