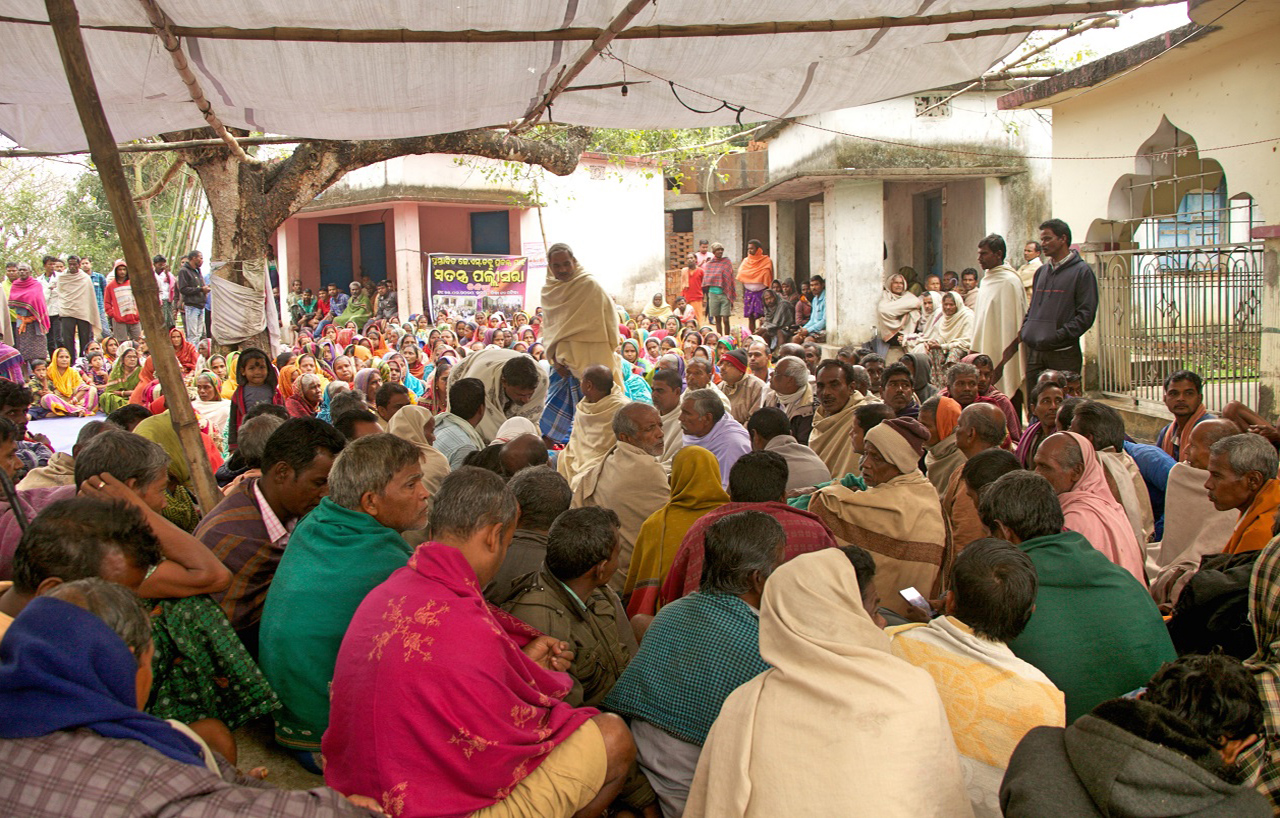 On 25 February, 2020, the people of Dhinkia in Odisha, held a Palli Sabha which unitedly and unanimously  declared that the villagers are in complete opposition to the proposed JSW Utkal project on their farm and forest land. A ground report by Surya Shankar Dash from Dhinkia.

On 25th February, 2020, the people of Dhinkia gathered in hundreds despite rain and bad weather for a Palli Sabha to voice their opinion about the proposed Jindal Steel Works (JSW) project. Earlier, the people’s movement of Dhinkia, which continued for over a decade, had stalled the proposed POSCO project, touted as India’s largest Foreign Direct Investment (FDI), at the same site, with PSOCO finally withdrawing in 2017. But, within a year the Odisha Government stirred up yet another controversy with its announcement that JSW would setup a project (JSW Utkal) at the same site. On 20 December, 2019, the State Pollution Control Board conducted a Public Hearing to get peoples opinion on the matter, but the people from the villages to be affected by the project alleged several irregularities and illegalities in the manner the hearing was conducted. One of the most glaring inconsistencies being the fact that despite being an integrated project comprising of a 13.2 MTPA steel mill, a 10 MTPA cement mill, a 900 MW thermal power plant, and a 52 MTPA captive port, the Environmental Impact Assessment did not provide any insight into the cumulative impact of such a project.

The Palli Sabha was held at a temple premise of the village deity, Maa Phulakhai. At the very beginning it was clarified that the Sarpanch of Dhinkia Gram Panchayat, who had relocated to Paradip, had not agreed to cooperate with the Palli Sabha. Activists had earlier alleged that the Sarpanch had been co-opted by the District Administration and had made a surprising statement at the Public Hearing in December, that though he had opposed the POSCO project in the past he had now undergone a ‘metamorphosis’ and therefore support the JSW project. In his absence the Palli Sabha was chaired by Dhinkia Ward Member, Natabara Sethi.

Environmental pollution, the destruction of the coastal forest and the Jatadhara estuary and its impact on life and livelihood was the primary concern voiced by the villagers at the Palli Sabha. “We are self employed and are not interested in the jobs being promised by JSW. We are worried for our environment. The steel plant will generate enormous amount of toxic waste and heat. The cement plant will cause dust pollution. How will plants grow here?” said Nityananda Swain.

“JSW spent lakhs on the Public Hearing with people brought in from faraway places in air-conditioned buses, expensive SUVs, provided a lavish feast and enormous amount of alcohol, and paid Rs.300 to every person to fill in the chairs at the Public Hearing, so that it would seem the people of the three Panchayats of Dhinkia, Nuagaa and Gada Kujang have attended the hearing. We have conducted this Palli Sabha today to counter their lies and bring for the truth Even today they hatched a conspiracy to sabotage our Palli Sabha by conducting a ‘Loan Camp’ for women at UCO Bank, Balitutha. They have organized vehicles to take the women there. The Tahsildar has come with Police escorts for the same. Police has been deployed everywhere so that their vehicles can smoothly take away the women from here. Despite all that the women of Dhinkia are here at the Palli Sabha to protest against the proposed JSW project, to save our Mother Earth, to save the Jatadhara estuary and to save the Sea” proclaimed Maonorama Khatua, one of women leaders of Dhinkia, in her fiery speech at the Palli Sabha.

Women have always been at the forefront of the agitations in Dhinkia despite police and mafia atrocities. Almost all of the women in the village have false cases filed against them for their participation in the anti-POSCO movement, even eighty-year-old women have been charged for assault. One of the reasons women are fiercely protecting their jal, jangal and jameen is because they have witnessed the conditions of their neighboring village Trilochanpur that lost all its farm and forest land to a massive Indian Oil petrochemical refinery. Women leaders like Manorama Khatua, Mamata Swain and Shanti Das elaborated upon the state of women employed in the Indian Oil refinery, and that the only work women got was to ‘wash dishes and massage the feet’ of their employers, and that it would be really illogical to give up their land and become slaves for JSW, whereas they themselves employ migrant workers in their own betel vineyards.

A few weeks ago JSW faced the wrath of some youth of Jagatsingpur district who got disillusioned with its promises of employment and ended up smashing all the furnitures in the JSW office at Paradip town just a few kilometres away from Dhinkia village. Manorama Khatua also cited the example of women who were severely beaten, sexually assaulted and critically injured for demanding jobs at the Jindal Steel & Power Ltd. plant in Angul district of Odisha in February 2012.

Chandan Mohanty was one of the few people who had given in to the lure of POSCO’s lofty promises and had surrendered his betel vineyard. But within a few years he had realized he had been duped, and today he sustains himself working in the vineyards of the women of Dhinkia. In a visibly emotional testimony he said, “The government and the Posco conspired and created a rift between us. They will hatch conspiracies again to destroy our unity because they know the company cannot be established as long as we remain united. They have the administrative machinery, the police and economic power, but all we need is unity. They could not establish POSCO and they won’t be able to establish Jindal. I feel sad that the government keeps trying again and again to snatch our land. I lost everything because POSCO fooled me. Today it is not the Government’s one rupee rice that sustains me. I am happy working in the vineyards of the Mothers of Dhinkia. The love, affection, respect and blessings of ordinary people is far more valuable than all the money of the world. Despite rain and storm, we must stand firm the way all of us have come together today. Some people thought the village council meeting will fail because of the rains. But, looking at all of you here together does it seem anymore that anyone wants this project? We will take each and every person’s opinion and I am sure not a single person wants the company here. The reason is because each person here is a company, every family here is a company and when we are the owners of our own company why should we be slaves in theirs?”

As one by one every speaker recounted the brave resistance put up against the POSCO project, the Palli Sabha echoed with applause, invocations to Maa Phulakhai and resounding opposition to the JSW project. As Debendra Swain, a youth leader stated after reading out the Resolutions adopted by the Palli Sabha, “Today we can say that JSW has been kicked out of Dhinkia.”

The following resolutions were passed at the Palli Sabha:

– For hundreds of years we have depended on this forest for our survival. Apart from betel vineyards this lush, fertile land has provides us with cashew, coconut, drumstick, mango, jackfruit, betel nut, pineapple, guava, many other varieties of fruits, roots, and vegetables. We also raise our cattle and lifestock on this land, and carry out extensive fishing here. We cannot survive without this forest as most of us are landless. Therefore we will not allow any factory to be built here.

– As per Forest Right Act (FRA), 2006, our individual and community rights must be recognized first and the consent of the Palli Sabha must be taken before any forest land is diverted for non-forest usage. But, the Govt. has failed to do both, the FRA claim recognition process has not been carried out and the consent of the Palli Sabha has not been taken. Such an act of the Govt. is a clear violation of FRA and is putting the life and livelihood of the people of Dhinkia at great risk. Hence, today in this Palli Sabha we renew our demands for immediate recognition of our FRA rights and claims.

– Despite our protest and opposition the company’s employees are frequently visiting our village and luring our people with false promises, which is creating disharmony and affecting the fraternity in the village. We are being threatened that we will be charged with false cases and arrested like in the past during the anti-POSCO agitation, and when we are in jail they will build the JSW project. We are all living in great fear now. Today we have decided that from now on we will not allow any JSW employees to enter our village. If the company continues to send its people to our village to rupture the harmony and fraternity of our community then the Govt. and the Company will be held for any unrest and law and order situation that will arise.

– The resolution of the Palli Sabha will be sent to all public representatives and district administration, the Collector, the Ministry of Environment & Forest, the Human Rights Commission, the Chief Minister, the Governor, the Prime Minister and the President.

– In this Palli Sabha, we are unitedly and unanimously as a community declaring that we are in complete opposition to the proposed JSW project.

Considering the history of the two decade old regime of the BJD Govt in Odisha, it is unlikely that that the law of the land will be followed and the verdict of the Palli Sabha will be respected. Naveen Pattnaik is known for employing an army of bureaucrats to manipulate and manage such situations in order to appease the mining companies. The agitation by Adivasi people in Talabira continues against the coal-mining project for Adani despite several women having been arrested and harassed. In Southern Odisha, bauxite miners like Birla, Vedanta, Nalco and others are wrecking havoc in the districts of Koraput, Rayagada and Kalahandi. All dissent in the southern districts is labeled as left wing extremism and subjected to paramilitary brutality. Despite running a brutal regime, Chief Minister Naveen Patnaik is not seen in the same light as Narendra Modi and it can be attributed to Pattnaik suave and erudite ways that doesn’t stick out crudely. Pattnaik is the kind of person who allocates half the amount of the state’s entire health budget towards the renovation of a Brahmin temple but nobody would label him as Hindutvabadi. It is this insulation from criticism that allows his Govt. to carry on with brutality and devastation.

The land and the permissions granted for POSCO are being brazenly transferred to the JSW project without following due process. Several petitions condemning the illegal Public Hearing have been ignored and the Government has recently awarded several iron ore mining leases in an auction to JSW, although the company was found to be employing unethical means to bag the mining leases. The Naveen Pattnaik model of illegal, forceful and violent industrialization is evidently being employed for JSW. The people of Dhinkia, especially the women, know it very well having faced terrible police and mafia repression during their agitation against POSCO. Even then they strive towards a peaceful and democratic movement to save their land, forest, water and livelihood from industrial devastation, and the Palli Sabha is a big step in that direction.

Surya Shankar is a filmmaker-activist from Odisha.