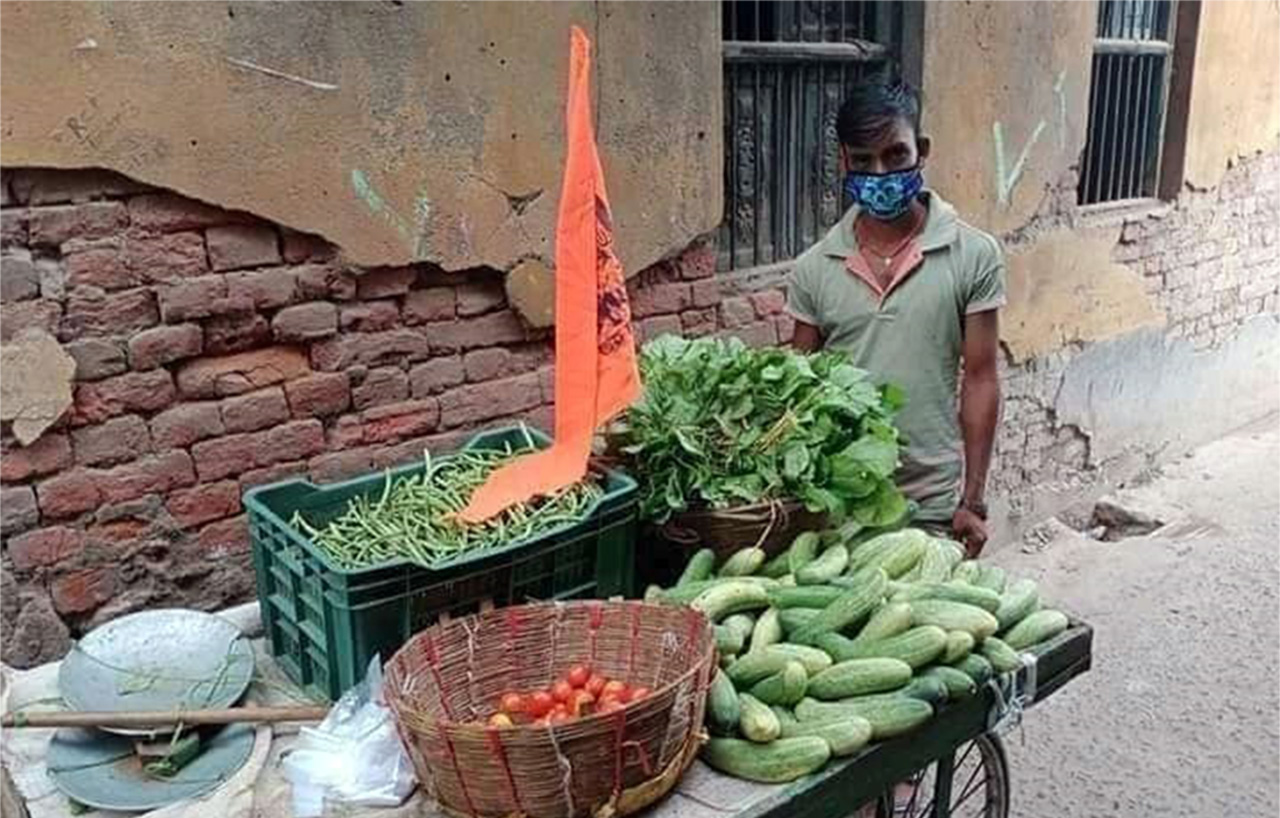 Ever since the Tablighi Jamaat issue came to the fore, Bihar, like elsewhere, is facing a surge of communal incidents and polarisation. A section of the traditional as well as social media is adding fuel to the fire by spreading misinformation with a communal tinge. Not only local leaders of right-wing organisations, but even government officials and top state BJP leaders are stoking the fires of communal passion. In this regard, Nitish Kumar’s home district hogs the limelight: saffron flags were put up there as a marker of identification for Hindus. Meanwhile, a ray of hope comes from some new digital platforms which have sprung up during the lockdown to counter this hate campaign, writes Anish Ankur from Patna.

Mohsin, a driver by profession, hailing from the village of Manjhaul in Begusarai district, is desperate because for the last one and half months he has been unable to earn a penny to feed his family. He is a daily wager who never in his wildest imagination thought he would find himself in this situation, confined to his home. His only hopes rest with the Public Distribution System (PDS) where he expected to get rations for his family. But thanks to the vitiated social atmosphere and communal tension after the Tablighi incident in Delhi, he fears going outside. People are regularly blaming minorities and holding them responsible for the coronavirus outbreak. They are being socially boycotted; shopkeepers are denying them essential items owing to their Muslim identity. They are being discriminated against in the relief measures on the basis of their religious identity.

Awadhesh Lalu, a former student leader of Patna University, is at his village (Kailitand in Bhagwanpur, Vaishali) during the nationwide lockdown, where he reports seeing upper caste men of  his village not allowing  poor Muslims hawkers to sell their items. They put up barriers at entry points to prevent them from entering the village. These Muslims hawkers were serving people by selling vegetables and fruits at the doorsteps of villagers. Since people refrain from going outside, these hawkers earn their livelihood by reaching out to their customer’s place of residence. Awadhesh Lalu has had to struggle a lot to convince these upper caste men to remove these barriers.

Similar countless stories are coming from almost every nook and corner of Bihar. Facebook, Twitter, and WhatsApp are being used frequently to spread fake news, videos, and messages which blame Muslims for the spread of the coronavirus in India. There is a systematic campaign going on against Muslims, aimed at boycotting them economically.

At the chief minister’s home district, Nalanda, activists of the Bajrang Dal, an affiliate of the RSS, put up saffron flags in front of providers of essential items like groceries, vegetables, and fruits, to serve as an identification of shops owned by Hindus. Block Development Officer (BDO) of Bihar Sharif, Rajeev Ranjan had to register an FIR with the Laheri Police Station against these Bajrang Dal activists. In the FIR, Mr Rajeev Ranjan said :

“On April 18 after getting information I visited Bharvpar chowk and saw that saffron flags are being put up at the shops owned by Hindus by the local Bajrang Dal activists Kundan Kumar, Dheeraj Kumar, and five other unidentified people and Hindus are also being urged to purchase the goods only from those shops which has saffron flags or owned by Hindus… There is a strong possibility that communal harmony may be disturbed or communal tension may be created with their act… After investigation it was also found that on a social media Twitter handle @RahulPrince1432 such things have been mentioned and pictures of saffron flags being unfurled at shops have been released by these members of [the] Nalanda [chapter of the] Bajrang Dal.”

Similar cases have been lodged in Muzaffarpur, Shahabad, Katihar, and Saran districts as well. In Katihar, the police have arrested an individual who was running a portal to spread a fake video about COVID-19 patients moving around unattended in government hospitals. The Bhojpur police also lodged cases against those who shared inflammatory and communal messages on social media. 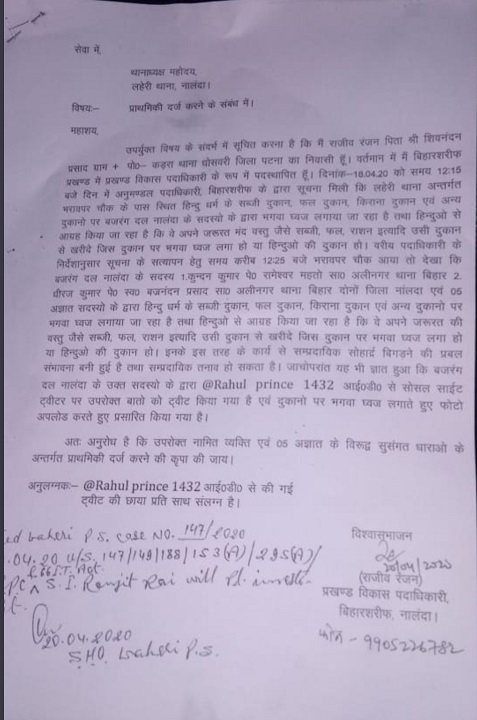 But in some cases, even the District Magistrate (DM) himself was complicit in spreading fake news. Bihar’s Home Secretary had forwarded to the Union Home Ministry a letter sent by the District Magistrate of West Champaran warning that around 200 Indian Muslims, believed to be COVID-19 infected, are likely to cross the Indo-Nepal border into India. 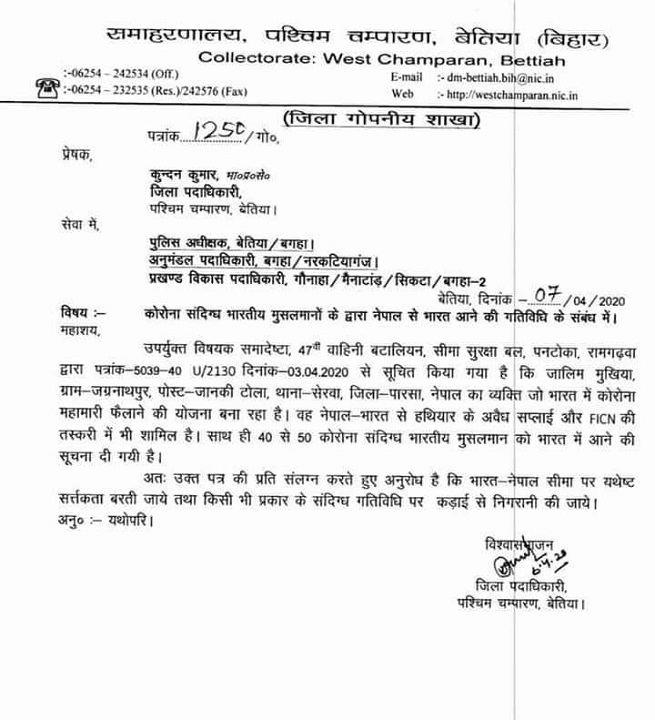 On April 3, Commandant of the 47th battalion of the SSB posted at Pantoka in Ramgarhwa, West Champaran district sent a letter (No 5039-40 U/2130 ) addressed to the District Magistrate and Superintendent of Police alerting them to the “movement of suspected Corona positive Indian Muslim nationals from Nepal to India”. One page of the letter marked “Confidential/Urgent” read

But after some days, local journalists busted this fake news by tracing the village. Freelance journalist Amit Kumar said

“In Nepal people are laughing on [sic] the fake news regarding Jalim Mukhiya. Two journalists of Nepal, Krishna Sigdel Sharma and Fautam Srheshtha have investigated and found that news of 40-50 people coming to India to spread the coronavirus is totally baseless. Letter of SSB and West Champaran’s DM is totally based on false   news. There is no truth in their letter. All the people tested near Jalim Mukhiya house were found negative.”

But neither the administration nor the government, have given any clarification after being caught on the wrong foot.

Police have lodged 153 cases just in the last one month of lockdown. About 82 people have been arrested and 153 cases filed since March 22 after the first COVID-19 case was detected in the state. Further, the number of Covid19 cases, have gone up from 104 to 153 over the last ten days.

When the number of cases was 104, an investigation was conducted by a media house where it was revealed how fake news was being spread through social media. It is a common understanding that WhatsApp is the main digital platform through which fake news is being circulated. But the investigation has indicated that Facebook is now the main medium of fake news. In the 104 cases lodged by the police, 64.91% news was aimed at spreading hatred by appealing to religious sentiments.

The Muzaffarpur and Shahabad police ranges are competing against each other in this respect. Out of 57 cases in 20 districts, 37 cases were on account of religious polarisation. In these 57 cases, 45 fake news stories have been spread through Facebook. Perhaps most importantly, out of 104 cases 58 came from only four police ranges – Shahabad, Muzaffarpur, Saran, and Magadh – consisting of sixteen districts. About 79 persons have been booked in connection with the dissemination of fake news.

In this investigation it was found that 90% of the involved persons are youths. However, teachers, police officers, and representatives of various organisations are also posting fake news on social media. When an ASI of Buxar posted a provocative video he was suspended. In some cases the DM and SP have been threatened by some misguided youth. Sonu Kumar was arrested after he made indecent remarks on Facebook live against the Purnia SP. On Facebook itself some miscreants even went to the extent of offering an award of two lakh rupees to anyone who would shoot at the Darbhanga DM. Although two suspects have been arrested in relation to this, the real culprit is still at large.

Spreading rumours, posting fake news, and sharing provocative material is a punishable offence. According to senior lawyer Yogesh Chandra Verma, “Under section 67 of IT Act a person found guilty will be liable to three year imprisonment and a penalty of 5 lakhs.”

On the one hand there is the business of generating and disseminating fake and hateful news, and orchestrating the communal boycott of minorities, while  on the other hand several digital platforms and Facebook pages have come up to counter these challenges. Rakesh Kumud and Bittu Bhardwaj are running a page on Facebook called ‘Live Janshakti’, and trying to put forth alternative viewpoints in the public domain. Both of them underlined that

“When we saw that most mainstream, print and electronic media, is parroting only the government view and communal organisations were spreading fake news and creating enmity among communities then we decided to launch a digital platform to voice the concern of citizens. We initiated [the] ‘Live Janshakti’ page on Facebook on 16th April and invited people of different disciplines to voice their concern. And now after fifteen days we are getting overwhelming responses from across sections of society. We are trying to put forward a counter narrative before people so that they can judge things independently.”

Similar digital platforms like ‘Bihar Coverez’, ‘The Bihar Mail’, ‘Jansanvad’, ‘Headlines Bihar’ from Patna, ‘The Janmitra’ from Buxar, ‘The Azadi’ from Khagaria, and others are also active during the lockdown and regularly providing valuable content to viewers. Different mass organisations of secular, democratic and leftist outlooks have also started to take up the burning issues. Worker migrations and communalisation of the Corona crisis are the major themes around which most of the discussions take place. A lot of people give information and express themselves through their personal page and if we take into account all these initiatives then it can be said that collectively it has created almost a parallel virtual world, a counter narrative on social media. People have devised new ways to register their protest.

Although these initiatives have their limitations in terms of outreach, at least they have reacted and responded to the crisis that itself is a new beginning. Moreover, it has created a challenge to the communal narrative at least in the virtual world.