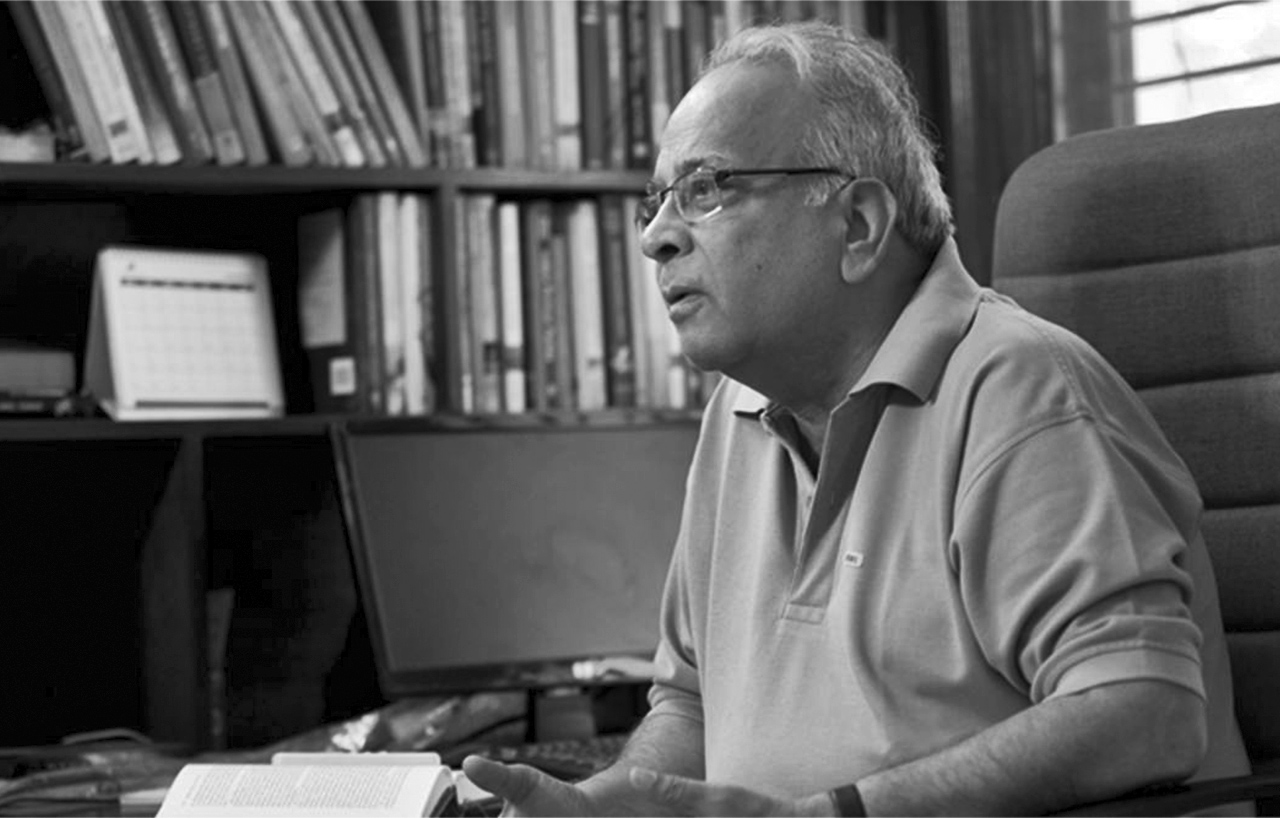 December 10th 2018 marked the end of an era. An era of liberalism, pluralism and cosmopolitanism. It was the day when noted historian Mushirul Hasan passed away. Reading the book Mushirul Hasan: An intellectual and institutional journey (2020), brings back memories of him, writes Zeeshan Husain.

December 10th 2018 marked the end of an era. An era of liberalism, pluralism and cosmopolitanism. It was the day when noted historian Mushirul Hasan passed away. Reading the book Mushirul Hasan: An intellectual and institutional journey (2020), brings back memories of him. It is a collection of essays by a number of scholars, historians, journalists, as well a few of Hasan’s own works. I must say that I am almost overwhelmed by a weird sense of loss while going through the pages of this book. I have been reading Hasan, mostly his newspaper articles, for years. I have also read few of his scholarly essays, of which I remember three. One was on his ‘radical’ days in AMU, another was about sectarian strife in colonial Lucknow, and the last one was on the ‘Muslim mass contact campaign’ by the Indian National Congress in British India. I cannot recall the number of newspaper articles written by Hasan that I have read over the past decade and half. Besides these, I have watched his recorded videos on YouTube. They were lectures, paper presentations, and interviews. I knew Hasan as a prolific writer, a famous historian, and finally as someone whom my family knew. My maternal grandfather, Sarwar Husain, also used to follow his writings. I was introduced to Hasan’s splendour by my grandfather. Despite being a simple college graduate, my grandfather never stopped reading, though mostly remaining within the narrow confines of the national and regional dailies. History was one of the disciplines he loved, and historians like Irfan Habib were looked upon with considerable admiration. Among the many such (left-liberal) historians was Mushirul Hasan. My grandfather owned a copy of the book India’s Partition (1993), a collection of essays by noted historians. I distinctly remember his copy being extensively annotated, mainly in the chapter by Hasan. It was on the Muslim Mass Contact program by the Indian National Congress in the 1930s. My grandfather asked me to read the essay by Hasan. I tried but failed to follow a single argument in it. I was too young for that, perhaps. When I told my grandfather that I could not understand the tenor of the essay by Hasan, he laughed his head off.

My real fascination with Hasan increased gradually over time. This happened partly because my grandfather would bring him up often, and partly due to my growing awareness of the social sciences. I used to read Hasan’s writings whenever I got the chance. I remember an interview of him published in The Telegraph. There, Hasan related an anecdote where he had met the famous novelist Nirad C. Chaudhuri. This was when Hasan was pursuing his PhD in Cambridge University in England. He and his friends were fascinated with Chaudhuri’s writings and wanted to meet him. When Hasan introduced himself, Chaudhuri suddenly started to mention a number of instances where ‘Muslim’ kings broke down ‘Hindu’ temples. At that time, I had not yet heard the now-popular term Islamophobia. I couldn’t imagine at the time that it would become so common, that I would have to face Chaudhuris at every other step.

Hasan was a figure who was deeply admired by my maternal family members as he was a familiar figure. Despite being an intellectual celebrity, he never made my relatives feel inferior. For many years, he used to drop by my grandfather’s place whenever he visited Kolkata. I remember my mother saying that Pervez mamu, as Hasan is still remembered among my relatives, never used a single English word in his conversations with us. His command of the Urdu language, his candor, and his modesty were unique and characteristic. He was completely at ease with two extremes – elite historians and common folk.

I remember being a member of a student’s body in TISS, Mumbai. We invited Hasan to deliver a lecture on subjects related to Muslims in India. He readily agreed, and told us that he would like to speak on Syed Ahmad Khan’s contribution to the modern education of Muslims. The lecture was scheduled after lunch and he reached around 11 a.m. We requested him to have a sandwich, which he politely declined. We requested him twice or thrice more as a courtesy, and prompt sarcastic reply – “Lagta hai khane ka intezaam nahi hai”. We students burst into laughter. The book at hand — Mushirul Hasan: An institutional and intellectual journey (2020) by Suranjan Das and Hari S. Vasudevan — presents many such recollections by various scholars across the globe that illustrate his wit, including the publication of his book Awadh Punch (2012). Hasan was a great admirer of Syed Ahmad Khan and believed in cosmopolitanism, just like the founder of Aligarh Muslim University.

There is one more thing about him that found mention in my maternal family. It was the controversy over the publication of The Satanic Verses (1988) by Salman Rushdie. Hasan was firm, even while serving as a pro-VC, about his ‘liberal’ position that no one had any right to ban a book or any piece of art. He himself disagreed with Rushdie’s characterisation of the Islamic faith and practice, but supported the writer’s right to express their views. This cost him serious physical assault and four years of staying away from office. I wonder how many of us can defend this position in today’s India. It is this lesson that we take from Hasan’s life. Hasan personified staunch liberalism, and his writings reflected this. The essay by Manisha Sethi precisely brings this point to the fore. Hasan was radically liberal. His upbringing might have been a major reason behind his cosmopolitan outlook as his father was also a historian with a Marxist inclination. Hasan unflinchingly remained a nationalist dyed in the Nehruvian flavour. For him, Muslims stayed in India after partition as a matter of choice, not chance.

The volume at hand discusses his arguments on the ‘partition of India’, and the range he covered in terms of period and theme, and his supreme ability to write history in a fashion which was never dry, is unparalleled. I remember flipping through a few pages of Muslim intellectuals of Nineteenth Century Delhi (2005) which I gifted my grandfather, and it read more like a captivating novel than a history book with the usual dry narrative of factual details. The volume Mushirul Hasan (2020) tells us that he deliberately chose to write some books so that syncretic culture of India could be highlighted. This volume has some essays which are fresh in arguments and details. Francis Robinson writes that Hasan was a historian of Uttar Pradesh’s Muslim gentry, the essay by Farzana Shaikh gives us a bird’s-eye view of all the academic debates surrounding the partition of India, and we have Martha Nussbaum’s piece illustrating how slowly yet steadily Hindu nationalists are taking over India’s psyche. Hasan was denied a house for rent in Delhi, she tells us. At one place, economist Prabhat Patnaik tells us how, over a period of time, he got convinced by Hasan’s argument that the lower rungs of the Indian National Congress were not firmly committed to the values of figures like Nehru and Gandhi. We are seeing the ramifications of this in the continuous degradation of the socio-economic condition of Muslims since Independence. This volume is much too close to Hasan’s nature: never losing his temper when faced with a hostile viewpoint, but remaining firm on pluralism as a value to be cherished.

In today’s time we have multitudes of (not so) liberal Chaudhuris but rarely radically liberal Hasan. Educational institutes are not liberal enough. There is a serious dearth of Muslim faculty-members and students in higher education. For example, the number of Muslim teachers at my ‘liberal’ institution, the Center for Studies in Social Sciences in Kolkata (CSSSC) was zero! Same is the story of most so-called liberal institutions where one rarely sees faculties who are Muslims, Dalits or from other marginalised groups. Could Hasan have accepted this definition of liberalism? Would he have accepted that fence sitters can be called liberals? Has not the termite of Islamophobia been eating away at the strong walls of liberalism? For Hasan, liberalism was tested when he stood like a juggernaut against the state and media baying for the blood of innocent Muslim students after the Batla House encounter. Liberalism for him was to stand by humanity against the growing wave of Islamophobia, whether in the history of India’s partition or in the depiction of society of today’s time. Hasan teaches us that liberalism is not an indifference to social inequality and oppression, but the ability and willingness to stand with the voices at the periphery. A truly liberal person would call a spade a spade and will speak truth to power. Hasan has left us, but the volume Mushirul Hasan: an intellectual and institutional journey reminds us that liberalism and cosmopolitanism are the set of values not to be taken for granted but to be fought for continuously. Hasan paid a price then, and succeeded in etching his memory in our hearts. For a number of students and scholars, he was and still remains an inspiration. An inspiration for anyone, who believes in cosmopolitanism, pluralism and liberalism, genuinely and radically.

Zeeshan Husain is an independent researcher working on society and politics in Uttar Pradesh.