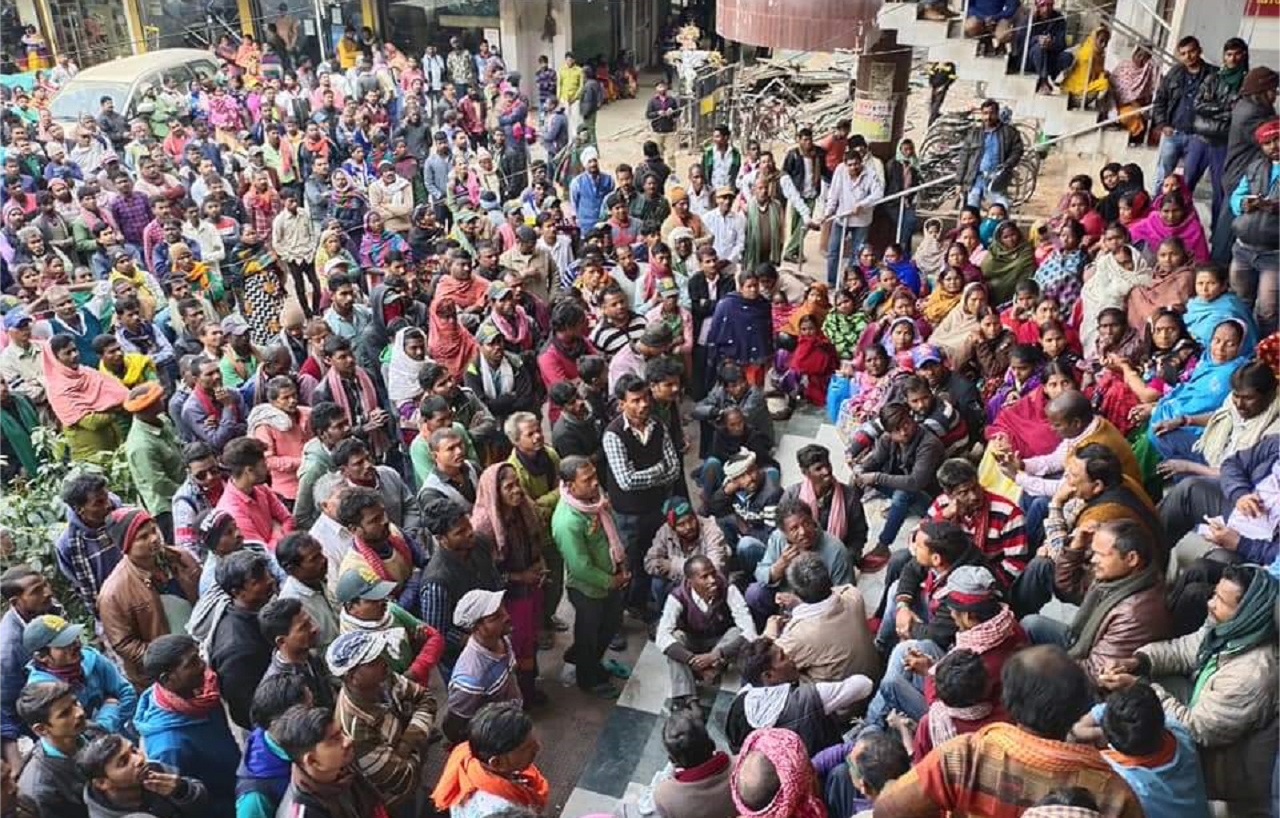 State capital residents heaved a sigh of relief as the strike by daily wage workers of the Patna Municipal Corporation (PMC) postponed their strike for two weeks. It had been six days since the strike began. The strike was postponed following talks between the PMC workers’ union leaders, the mayor of the city, councillors, and government officials.

Garbage collection vehicles with their signature song, “Gadi Vala aayaa, Ghar se Kachra Nikal…“, continued their services after one week. After six days the condition of the city of Patna had become horrible owing to the strike. The city had turned into a stinking heap of garbage, with animal carcasses lying on the roadside. In some cases, the striking employees brought animal carcasses from the downtown areas and threw them onto the main roads of posh localities.

Piles of municipal waste littered the sides of Boring Road, Patliputra colony, Bailey Road, Dak Bungalow, Fraser Road, Buddha Marg and many other prominent localities. Garbage heaps could be spotted in front of the house of Deputy Chief Minister Sushil Kumar Modi at Mala Road. The condition in areas including Jakkanpur, Mithapur, Ramkrishna Nagar, Kankar Bagh, Alamban, NMCH, PMCH, and Ashiyana was not any different. 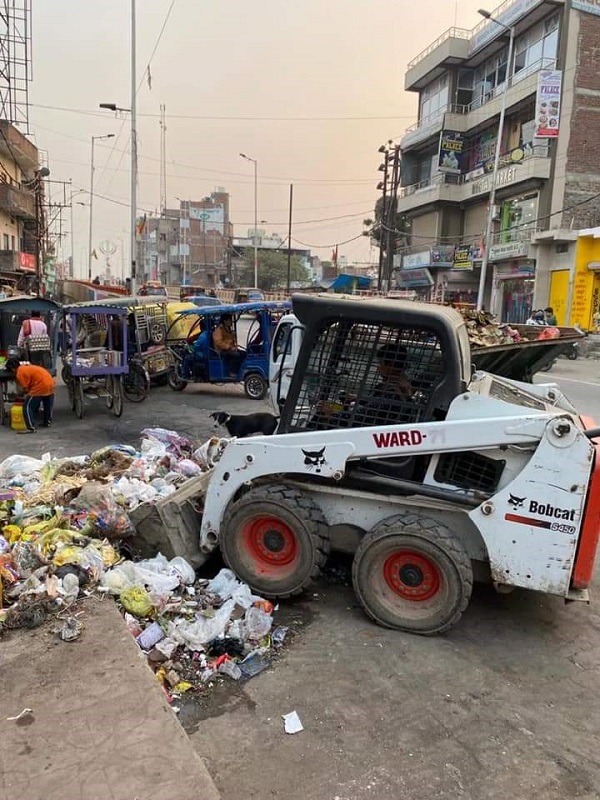 The strike was called because the urban development department (UDD), citing an order from the office of the Lokayukta, had directed all the municipal bodies, including the PMC, to stop engaging the services of daily wage workers in Group D with effect from January 31, 2020. Subsequently, 4,300 daily wage workers of PMC resorted to indefinite strike from February 3, demanding regularisation of services. There are 4,300 daily wage workers employed by the PMC and 2,200 workers hired by contractors for which they get money from the PMC participating in the strike.

Initially, administrative authorities tried to threaten the union leaders with FIRs and suspensions but they didn’t relent and continued with the strike. The unity of the striking employees could not be broken. On the other hand government, both the PMC and the Mayor were under immense pressure to end the strike at any cost, owing to the deteriorating condition of the city. The PMC also sided with the striking employees and pressured the government to come to the negotiating table. At last an agreement was reached after talks between all the stakeholders and strike was called off for two weeks.

According to Jitendra Kumar, spokesperson of the union affiliated to the AITUC said, “It was a spontaneous strike by daily wage workers in which around 35, 000 workers of the entire state participated. In Patna not only daily wage workers but permanent employees also supported the strike which can be called unprecedented in recent history. They did so by defying the threat of FIR and suspension by the authorities. We will wait until our demands are met or else we will again go on strike“.

Explaining the reason behind the strike, Mangal Paswan said “Daily wages of  4,300 category get payment [of] Rs. 400 per day. In a month they get payment of only 26 days barring Sunday. Of this money, 12 percent goes for EPF therefore they get only Rs. 9,150/- (Nine thousand one hundred fifty rupee only) for a month. [There are also] Daily wage workers of the 2,200 category, who are employed through outsourcing agency. Only get six to seven thousand rupee in their hand. While [the] government says they pay fourteen thousand per worker to the outsourcing agencies.”

Now, the bone of contention, as Pradeep, a daily wage worker pointed out, is “[The] Government wants to employ every worker through [the] outsourcing route. This will mean [a] reduction in the wage of daily wage workers. It should also be noted that there has been no permanent appointment in the PMC since 1990, [and] consequently seats vacated by the retired get fulfilled by outsourcing agencies. These agencies give only five to seven thousand rupee in a month while a permanent worker for the same job gets thirty to thirty five thousand rupee. Therefore our crucial demands are to make permanent the daily wage workers and stop outsourcing.” Pradeep also added “After calling off the strike, the government has to fulfill our demand within a stipulated time frame but as we are getting information we have doubts that the government will fulfill its promises given its policy of outsourcing sanitations works. Then we will not have any option except resorting to strike.”

A statement issued by the PMC stated that as per the agreement reached after the talks, the jobs of 4,300 daily wage workers will continue as before. “A committee will be set up to look into employee’s benefits like minimum wages, FPFO and leave rules for the additional 2,200 workers who had been hired through outsourcing agencies. It also added that “transparency will be brought in transfer of employees, besides all cases against employees will be withdrawn and payments will be made to them for the strike period. The PMC will also constitute a committee that will look into the problems of the workers.” 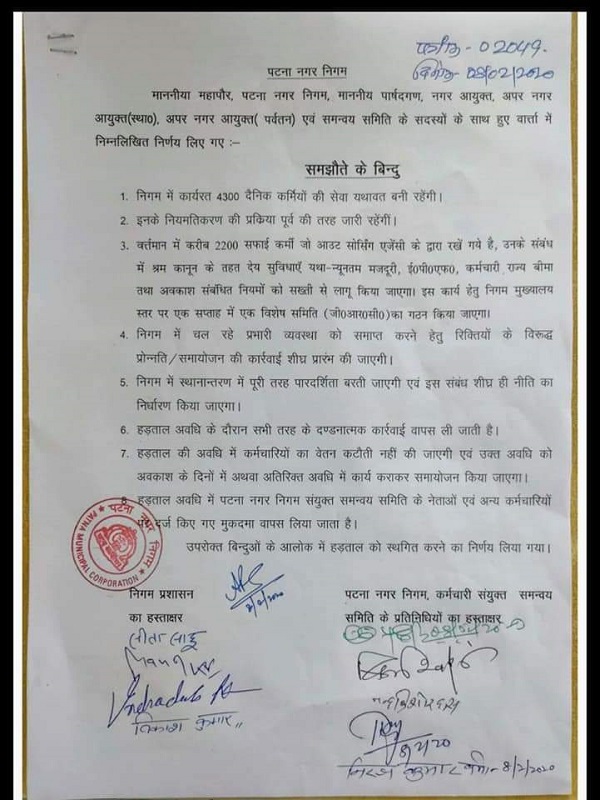 Copy of the agreement between PMC and the worker unions

Although the strike has been postponed, the unions are planning for a protest action in front of the Chief Minister on March 3. All the unions are also planning to file a writ petition in court against the outsourcing of sanitation works. They are emboldened by the Allahabad court judgement against outsourcing.

A lot of citizens think outsourcing of sanitation works is one of main reasons behind the deluge of Patna city during the monsoon season. Nandkishore Singh of  ‘Citizens Forum’ said, “Earlier permanent employees  used to do sanitation works, they were very professional  and committed but these outsourced daily wage workers and very low paid, they are bereft of any social security benefits. So they are less motivated for [the] difficult task of cleaning and maintaining the drainage system. During the monsoon season, Patna got submerged for several days just because the entire sanitation work had been outsourced to private agencies.”

Daily wage sanitation workers and their representative unions are determined to take forward their struggle if the government does not fulfill its promises. Despite the neoliberal logic of outsourcing and privatisation of the public utilities, the government was compelled to retreat. But whether the government will fulfill its own written assurances or not only time will tell. Meanwhile, the wage workers of the PMC eagerly wait for their demands to be fulfilled.