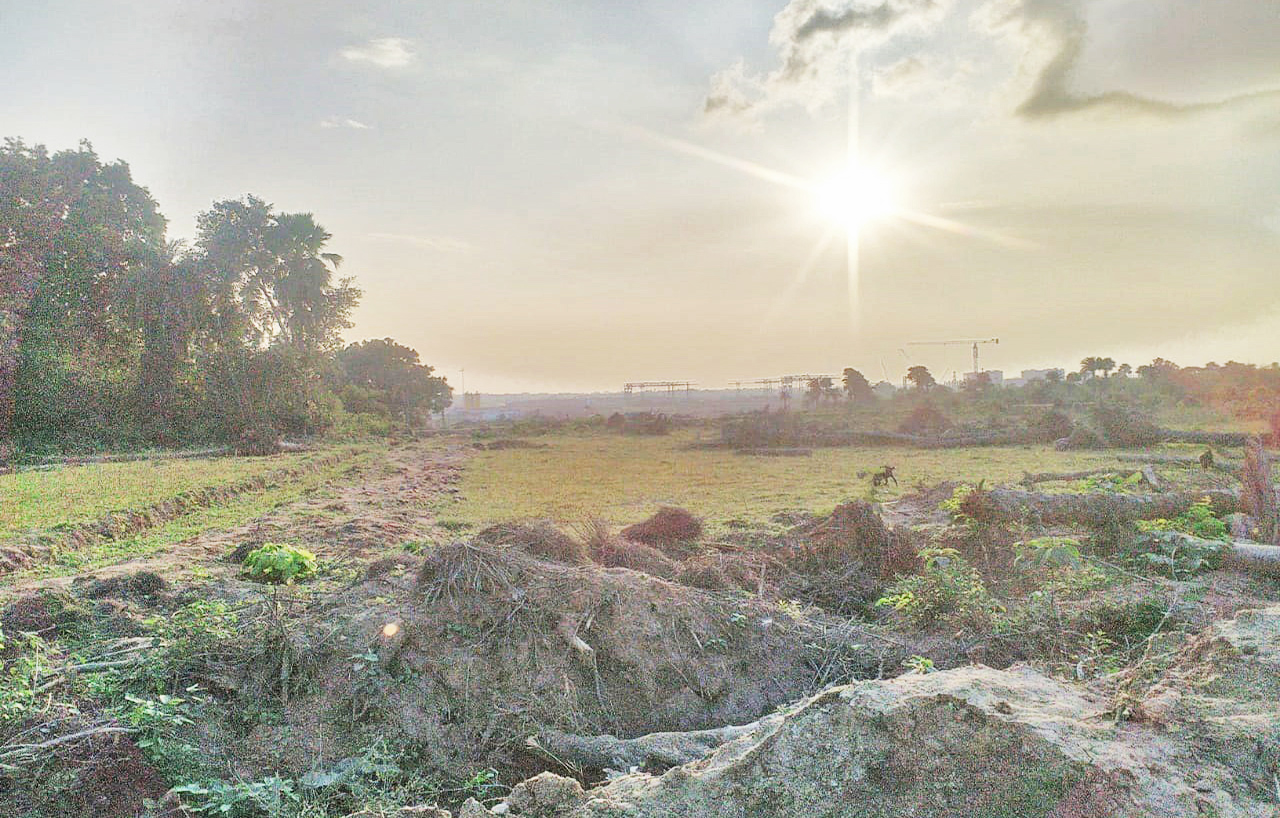 Adani Power Limited is building a thermal power plant with the capacity to generate 1,600 megawatts of electricity in the Godda district of Jharkhand. The Godda project requires 1,214 acres of land. The villagers claim that their land was forcibly acquired by the government. Subha Protim Roy Chowdhury recently visited the project affected villages, talked to the villagers, the local MLA, and with local journalists and administrative officials. GroundXero publishes a three-part report on his findings. Here is the third and concluding part of his report. To read the first and second part of the report click here and here.

On the way to Adani Power project site, we passed through Rangania village. The village falls under the jurisdiction of the Pareyahat block. It is about 3 kms away from the project. A Kali temple greets us right at the entrance to the village. It contains a plaque which says, “This temple has been built by the Adanis.” I spoke to a young man here. This Santhal youth, unwilling to disclose his name, said – ‘We inhale dust and smoke for free in spite of being so far from the plant. Look at the trees in our village.’

But the Adanis have built a Kali temple in your village, haven’t they?

‘Of course they have. These things they have to do. They have installed a tube well too. But for how long will the water flow? It had stopped for a while in May itself. I heard this project would require 100 million litres of water every day. It would suck everything dry.’

Are you part of the protest movement?

‘No we aren’t, as yet. But they will take our land as well, tomorrow if not today. If a thermal power plant is built here, the ash from all the burning coal will fall on our land and ruin it. There will be no water. Our last refuge would be to flee from the village. It would have been better if they had built a crematorium instead of a temple! If another movement starts, we will certainly join it.’

We also spoke to a tea-vendor near the project area. The young man from Bhagalpur showed his anxiety, ‘already the exodus of landless farmers is now a reality’.

People with no land are leaving now, is it?

‘Not only landless farmers, but also fisher-folk and vegetable vendors depended upon this area and the people have become jobless. Very soon they will get rid of me. Most probably you will have to search for my tea-shop on your next visit’.

Applications have been submitted to various government offices through personal as well as collective efforts. On 18.09.2018 the Jharkhand State Branch of the Anti-Eviction Nava Nirman Morcha submitted a complaint to the Governor asking for remedial measures to counter the anti-people steps being taken by the government for Adani Power. We spoke to the local representatives of said organisation. He said that land is being forcefully acquired for Adani to produce electricity which would be exported to Bangladesh. His organisation had sent a complaint to the Governor seeking redressal. They had not even received a reply, let alone redressal. The representative also informed us that some of them, including Anil Hembram, Rakesh Hembram, and Girinath Tudu had previously sent letters to the Governor on 12.09.2018 informing him about the ongoing violations of constitutional rights, and of the Santhal Pargana Tenancy Act, 1949. Letters were also sent to administrative officers of the district, and to the Chief Minister. Nothing changed. 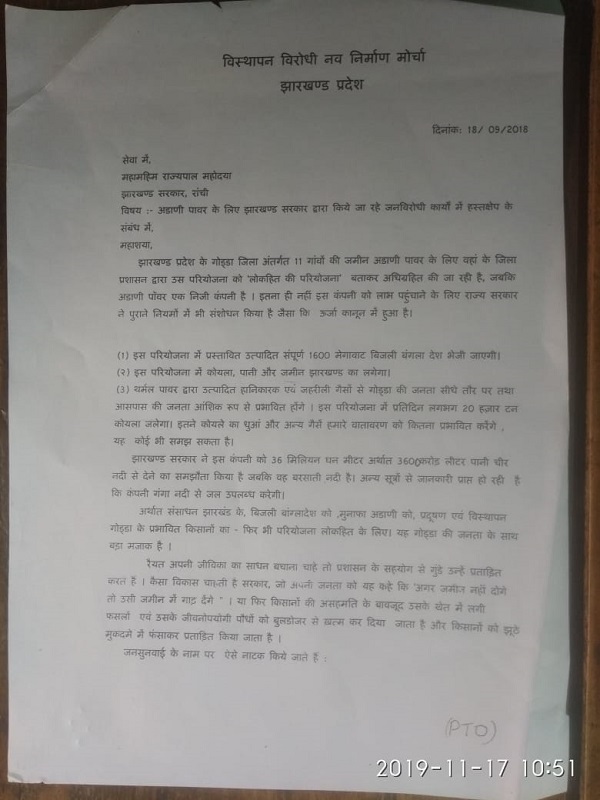 The Adanis fabricated a case against the villagers. They complained that the villagers are tilling the company’s land. This is what Adanis’ lawyer said in the appeal made against Manager Hembram in the district court of Godda. The court forbade the Manager from visiting the land and from disturbing the Adani group’s operations. In other words, the villagers were shown the door by both the court as well as the administration.

The Human Rights Law Network (HRLN) lodged a writ petition in the Ranchi High Court on behalf of 16 applicants seeking to quash the takeover of 1,363 acres of land by Adani. The applicants requested the court to direct the state government to return the lands of the farmers. The application read:

‘These applicants earn their livelihood through farming. They have no other way to sustain themselves. Their families are entirely dependent on this land for their life. According to law, they are counted as victims. The applicants have witnessed the whole process of acquisition closely. It has been totally illegal, and the consents have been extracted by force, fraud and other manipulative tactics. No compulsory legal procedure has been followed.’

Only the landowners have been considered for compensation. However, almost 4,000 agricultural labourers, contract farmers, fisher-folk, and tenants have not been mentioned. These people also stand to lose their livelihood because of the acquisition.

Acquisition of land for a private company does not come under the Land Acquisition Act, 2013 (The Right to Fair Compensation and Transparency in Land Acquisition, Rehabilitation and Resettlement Act, 2013). According to the explanation of its Article 2(1), this process does not come under the scope of ‘public interest’. This is because the entire project is geared towards ensuring profit for the Adani group.

400 unwilling landowners, who refuse to sell their land to the government, have asserted that they have not been included in the Social Impact Assessment Report. In the application it is said that almost 2,000 trees have been illegally cut down without permission, croplands have been altered, and the livelihoods of farmers have been attacked.

But the truth is that this writ petition has not seen a single hearing until the one on 11th November, 2019. Villagers have expressed before us their anxiety and despair at the time-consuming nature of the legal process. Many of them do not know the ground realities of the case. On 28th November, 2019 we sent a letter to the HRLN informing them about the villagers’ worries and requested them on behalf of the villagers to let us know about the current situation of their writ petition. HRLN replied us promptly in same day, here it is-

‘We are extremely sorry for this inconvenience. Let me tell you the present status.

Yesterday the matter was listed. All the interlocutory applications were disposed. Court looked into the urgency and directed to place the matter in the next week. We will share the order soon.’

We are grateful to HRLN; we had conveyed their message to the villagers.

The common people here have formed a movement in accordance with the constitution of the land and its laws. They have not veered from the path of law either on the streets or during their battles in the courts. The government has veered. The corporates have made a mockery of the law. All forces of violence of the Adani-Modi entente have been unleashed in this corner of the Santhal Pargana.

(We will not leave our village, nor our jungle

We will not leave our Mother-earth, nor our struggle)

While discussing the Santhal Mutiny (Hool) of 1855, Charles Dickens wrote that ‘The sense of self-respect was so powerful in these people that even though we knew the Santhals used poison arrows at the time of hunting, they never used them against a human enemy. In this conflict we have never had to face poison arrows. They deserve much more respect than our so-called civilised enemies.’

Where does the land movement in Godda stand? Does it stand with the MLA’s ‘dormant phase’ or the ‘Everything from the state to the centre has been sold!’ mood? The Santhals have refused to give up their land. Their processions were undaunted by the lures of money, by violence, false cases, motorbike-riding goons – nothing could break their spirit. The editor of the Hindi newspaper Dainik Jagaran from Godda district said, “It is difficult to subdue those (Santhals). Figures like Chintamani Sahu, Ramjivan Paswan, etc. are not tribesmen, but they did not give up their land; they joined the movement. There is a recognised structure of mass movements here. However, the movement is currently witnessing a low tide. It’s like a fire burning inside cinder. Waiting for a spark to start a wildfire.”

We also spoke to a police officer, once deputed in the Adani project area. He talked to me at the adjoining district of Deoghar. He said, ‘The problem is that we have to raise our batons on our own people.’ This is what troubles me. My home is in Dhanbad. For the last two decades, I have been here at the Santhal Pargana. These people do not know violence. They do not know the tricks. The villages here are as quiet as shade under the trees. But I have seen what they are capable of once someone or something manages to make them really angry. I have seen the movement for Jharkhand, the people’s enthusiasm. The leaders are often corrupt. But the common Santhal is still pure. They refused to give up their land in the vicinity of the factory, in spite of a huge amount of pressure from the Adani group.’ Even his eyes focused differently than before. Frankly speaking, it frightened me.

We had approached the local authority of Adani Power in order to speak to one of their representatives, but entry to the project area was restricted, and we were halted at the gate. We had tried to approach the administrative officers like the DC, SP, and District Labour Commissioner at Godda. They have refused to talk to us, citing the upcoming elections. But in the adjoining district of Deoghar, when I visited different district officers on work relating to a different issue after two days, no ‘code of conduct’ restricted them from talking to me. It is possible that the administrative machinery of Godda is playing dumb in order to protect the interests of the Adani Corporation.  And ‘understandably’, to serve the Modi-Adani regime.

We have spoken to other tribal families who have lost their land, and families who are on the verge of losing it eventually. I cannot quote all these interviews here. A local member of the Baksara Panchayat, unwilling to disclose his name, granted us only a small byte. He informed us that they, too, are against land acquisition. ‘We Santhals are innocent and brave of heart,’ he said. ‘Another hool (rebellion) is waiting’.

The once-green, peaceful villages of the Santhals are now covered with dust and smoke. The spectre of development haunts them in their own land. In this entire region from Nayabad-Mali-Gangta Gobindapur-Patoa- the beat of the dhamsa-madol are now accompanied by the rebellious chant of ‘Gaon Chhorab Nahi, Jangal Chhorab Nahi’ – the anthem of tribal resistance. The Adivasi’s struggle to protect their jal, jangal,  jameen (water, forest and land) from corporate loot is going on.

Land Dacoit Adani, and the resolute Santhals  Part one

The author is a social researcher and activist.