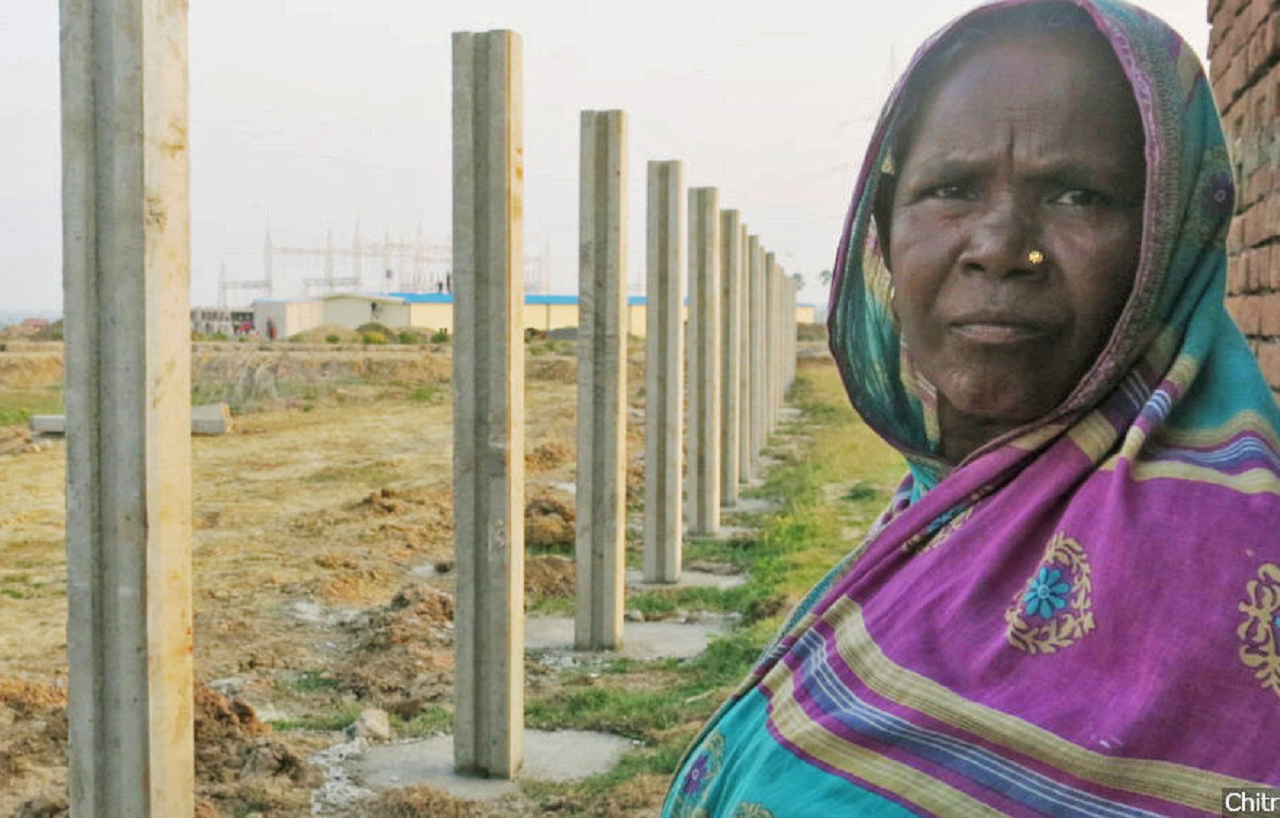 Adani Power Limited is building a thermal power plant with the capacity to generate 1,600 megawatts of electricity in the Godda district of Jharkhand. The Godda project requires 1,214 acres of land, according to its social impact assessment report. The Jharkhand government has deemed the project a ‘public purpose’ and is helping the Adani group to acquire land. The project affected villagers claim that they were forcibly kept out of the social impact assessment hearings and alleged that their land was fenced off by the company without their consent.

Protesting villagers, activists and legal experts have also raised questions over the legality of the land acquisition. They have pointed out that Godda is part of the Santhal Parganas Division, which is governed by the Santhal Parganas Tenancy Act. The act does not permit the transfer, lease or sale of agricultural land, barring a few exceptions.

Meanwhile, earlier this year, the project was approved by the state government to be made a Special Economic Zone (SEZ), following which construction work was started by the Chinese company Sepko Three. The entire electricity generated in this plant, using all the local resources, will be exported to Bangladesh. Subha Protim Roy Chowdhury recently visited the project affected villages, talked to the villagers, the local MLA, and with local journalists and administrative officials. GroundXero publishes a three-part report on his findings. Here is the first part of his report.

When the land that inspires the culture and accommodates the agricultural practices of indigenous tribal communities is snatched away from them, only two options remain: either struggle against the occupation or perish. The Santhals in Jharkhand have chosen the path of resistance. This is their story.

In the Godda district of the Santhal Pargana in Jharkhand, the Adani group, an industrial conglomerate preferred by Prime Minister Narendra Modi and the ruling Bharatiya Janata Party, is constructing a thermal power plant. More than one thousand acres of land, either originally occupied by the indigenous tribes or not, are required for this project, to be carried out by Adani Power (Jharkhand) Limited. That is why a ruthless land seizing operation is underway in this district comprised of ten moujas (a type of administrative districts) of Poreyahat and the Godda Sadar block.

Where will these Santhals, evicted from their land and from their occupation, go? By surrounding their agricultural lands, ponds, grazing grounds, and their sacred places, the power company of Adani is building guard-walls. Festivals like Badna, Baha, Dashai that represents and celebrates an integral relationship between nature and adivasi life are under threat.

‘Yes, not only the land they have pulled our roots; they are trying to uproot our identity, our existence. This year we had to halt our festivities.’  And water? ‘Yes, water too! They will loot all the groundwater.’ ‘Green Godda has become a desert’. ‘They are monsters!’

But why is such rampage going on in these calm and peaceful villages? Why is Adani here? Let’s focus on some newspaper clippings. For example –

Twelve days before elections dates were announced; the Modi government on February 25 cleared the way for an Adani project in Jharkhand to become the first standalone power project in India to get the status and benefits of a Special Economic Zone. For this, the commerce ministry amended power-related guidelines for Special Economic Zones earlier this year.

Geared towards exports, Special Economic Zones get a host of duty-waivers, tax exemptions and faster clearances. The government decision to grant SEZ status to the Adani project will save the company billions of rupees in taxes – Rs 3.2 billion annually in clean energy cess alone.

An article published in NewsClick on September 7, 2019 says –

The support from both the central and the state governments means all obstacles are being cleared. The process of land acquisition by constructing big walls has been finished. A Chinese company has entered these occupied lands with heavy equipment. The process of creating a Special Economic Zone or SEZ was started by seizing the lands of the adivasis. It is claimed that this Adani project will be public-oriented. This is, however, not fully true, because in the memorandum of understanding that was signed between Adani Power, the Government of India, and the Government of Bangladesh in 2016, it was clearly stated that this power plant would be established to export power to Bangladesh. Jharkhand will get only 25% of the total produced power.

Needless to say, as it is a SEZ project the state government cannot interfere in its functioning. Furthermore, it will get rid of the legal obligation to abide by the existing labour and environmental laws.

Previously, a table survey was allegedly done by Adani Power after they ‘falsely convinced some locals and prepared a fabricated report’. Explaining the reasons behind this allegation, Chinta Mani Sahu – who has lost his land and is going to challenge the acquisition process in the Jharkhand High Court – said, “The survey was done by AFC – a nodal agency of Adani Powers. Adani showed in its report that adivasis (who mainly belong to the Santhal tribe in this region) were living in the villages where not a single adivasi lives, while non-Adivasis were shown as living in areas which are entirely inhabited by adivasis. On the basis of this false report, [a] public hearing was held on December, 2016.’’

From the local Hindi tabloid Patrika, we learned that the public hearing of ten villages was completed within only ten minutes. Even on the last evening before the day of the hearing, the District Collector and the Police Superintendent told the people that only those who have an identity card, a voter card, a ration card, or documents proving ownership of land, can take part in the hearing. But the next morning only those people who had yellow card and green card were allowed entrance into the hearing. When people started to agitate, the police started to lathi-charge them. A group of nearly 500 police vandalised the nearby houses. The uniformed police personnel threatened, ‘You have to pay if you express your allegations.’ Despite such threats, the villagers did not get frightened and filed a case in the High Court.

The villagers started an indefinite hunger strike at the Gaighat village in Poreyahat block. Pradip Yadav, MLA from the Payerhat constituency and member of the Jharkhand Vikash Morcha participated in the hunger strike. Many other people joined in as well, to protest against the false report and the farcical public-hearing. Gradually this hunger strike platform turned into a site of mass movement. The police arrested Pradip Yadav, alleging that he provoked the masses against the hearing by campaigning that it would cause environmental catastrophe. Four criminal cases were filed against him.

Since then, terrorising people with false cases and multiple arrests has been going on. Some villagers are caught by the trap of temptation. Adani and the state administration have been able to weaken the intensity of the protest movement to some extent. Now the brokers and hooligans of Adani and the police are roaming the villages. Only outsiders are recruited in the construction of railway lines and in the power plant. They are all contractual labourers. Recruitment of local people in construction and other project related work is almost nil, they are not even allowed to enter the project area.

The author is a social researcher and activist.