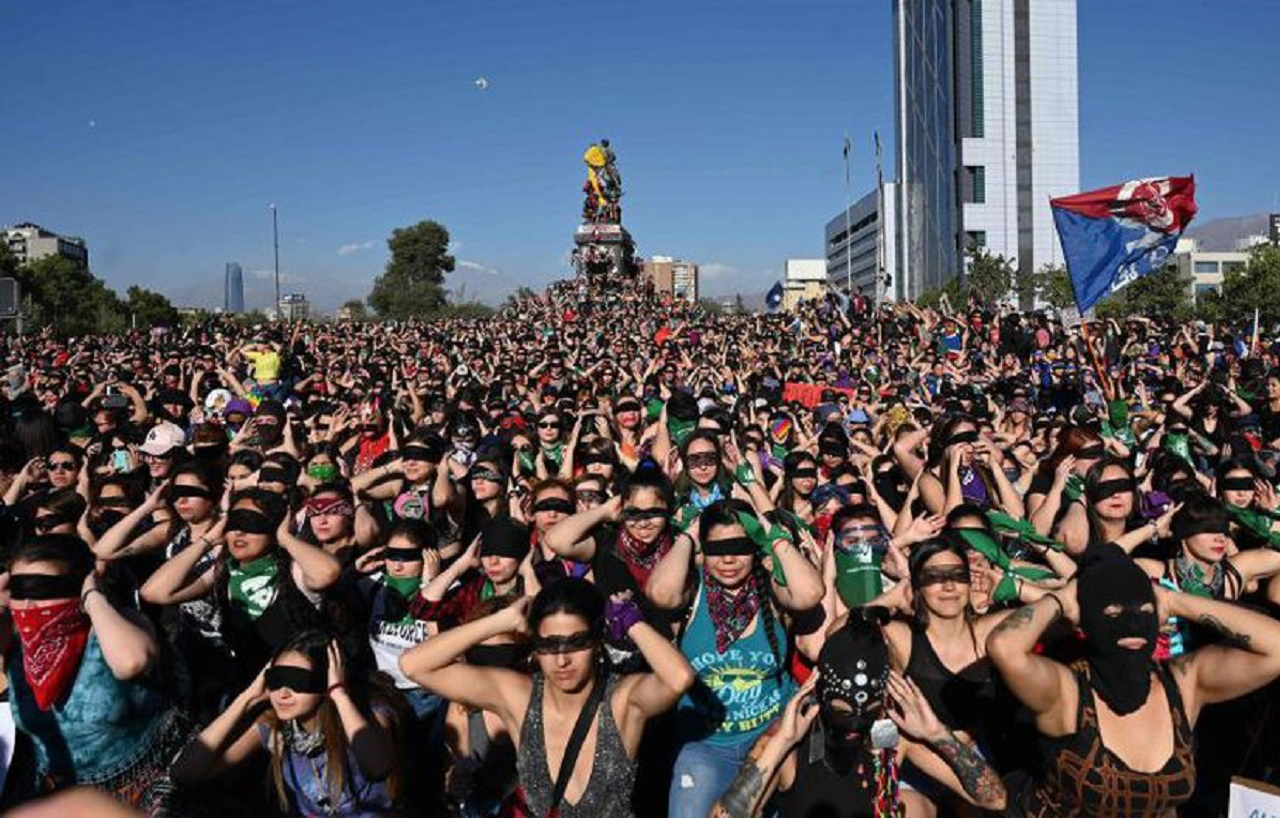 “And it wasn’t my fault or where I was or how I dressed.  The rapist was you. The rapist is you. The Judges, The State, The President”.

Thousands of women in Santiago, the capital of Chile, chanted these slogans in a choreographed performance that went viral. Pramod Gupta writes about this viral video – its context and politics, in the backdrop of the ongoing public outrage over the brutal rape and murder of a veterinary doctor in the city of Hyderabad in India.

Over the last few days, social media in India has been flooded by the news of and personal reactions to the horrifying rape and murder of a young veterinary doctor in Hyderabad. An organized effort was launched by Hindutva nationalists to give the crime a communal spin, through selective leaking of the Muslim name of one of the accused. Thousands expressed their rage and anger, and demanded justice for the victim. Justice, to them, invariably means handing out immediate punishment to all the four accused. The punishments demanded were often gruesome in nature – the death penalty, castration, public lynching.

Even a cursory look through the rape statistics in India would prove that rape as a crime is not uncommon in India. According to a report published by the National Crime Records Bureau (NCRB) under the Ministry of Home Affairs, the total number of rapes reported across the country in 2017 was 32,559 and that the accused were known to the victims in 93.1% of the cases. So, one is prompted to ask, why is there such a selective outcry? What explains the silence in cases of the same crime against women like Bhanwari Devi and Soni Sori? Why don’t the rapes of Dalit and Adivasi women, women from economically and socially backward castes and classes and religious minorities, stir the nation’s conscience in the same way the rapes of Jyoti Singh and Priyanka Reddy do? Why does the majority of those taking out candle marches now remain silent, or even justify or brush aside as concocted, the mass rapes in Kunan Poshpora in Kashmir or those that happened during the Gujarat riots?

Almost nowhere in the outrage over the last few days was the role of the patriarchal state and its institutions brought into discussion. No questions were asked of them. Justice invariably came to imply more policing, more state surveillance, granting women the permission to carry fire arms, amending laws to hand out death penalties to rape accused. The mass psychology reflected through social media reactions, particularly of the left liberal activists, was frustrating to say the least. One cannot help but conclude from the dominant pattern of the reactions that India’s feminist/activist imagination, too, is as casteized, classed, and Hinduized, as its imaginations of nationalism.

Amidst the deluge of such rhetorical posts, I accidentally came across a video on a WhatsApp group. It was a choreographed public performance in Chile. The power of the visual of the performance, though the language was Spanish, which I do not understand, stirred something in me. A quick Google search took me to the Latin American website of El Comercio and a few other links. This article is about the video, its context and politics.

“And it wasn’t my fault or where I was or how I dressed”, “The oppressive state is a male rapist“, “The Rapist is You. The judges, The State, The President” — chanted thousands of women in Santiago, the capital of Chile, in front of the presidential palace of La Moneda last Friday, in a loud and clear message against gender violence, amidst the social upheaval that has shaken the country since the middle of last October. These slogans or lyrics were part of a protest performance organized by the Chilean feminist collective Lastesis, on the occasion of the “International Day of Violence Against Women”. The performance didn’t happen just in the capital city, but was replicated in many cities throughout Chile. While the performance was first undertaken on the streets of the port city of Valparaiso, a week ago, the video that went viral throughout the country, had the most impact, and became a hymn of the current feminist struggle in Chile, was the one recorded in Santiago.

The Chilean collective called on women from all over the world to replicate the performance in their respective cities. Soon, social networks were filled with videos with performances by women groups in many cities such as London, Berlin, Paris, Barcelona, ​​Santo Domingo, Mexico City, Bogotá and New York.

Here, the complete lyrics of the song:

“Patriarchy is a judge, who judges us for being born, and our punishment is the violence you don’t see. It is femicide. Impunity for my killer. It is the disappearance. It is rape. 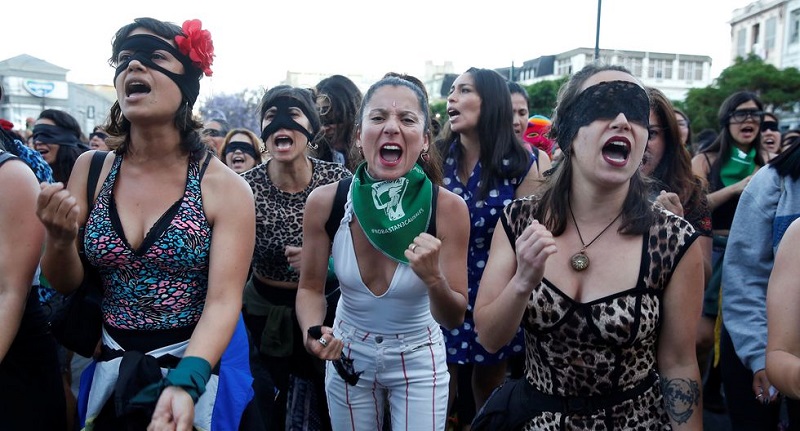 In Paris, the Eiffel tower witnessed a choir in French, which emulated the performance of the Chilean women. (Reuters / Rodrigo Garrido)

The political context of the performance

Feminist movements across Chile are actively engaged in the current people’s uprising to oust the President and smash a political system breeding social and economic inequality. Sexual violence is being used as a weapon by the Pinero regime to suppress the protests that have shaken Chile. The mass rebellion in Chile has already left at least 23 people dead and thousands injured, in addition to serious accusations against the army and the police for human rights violations, many of them related to sexual crimes. The Chilean feminists see this performance as an expression of their struggle against the patriarchal state that transcended a ritualistic observance of the ‘institutionalized’ day. 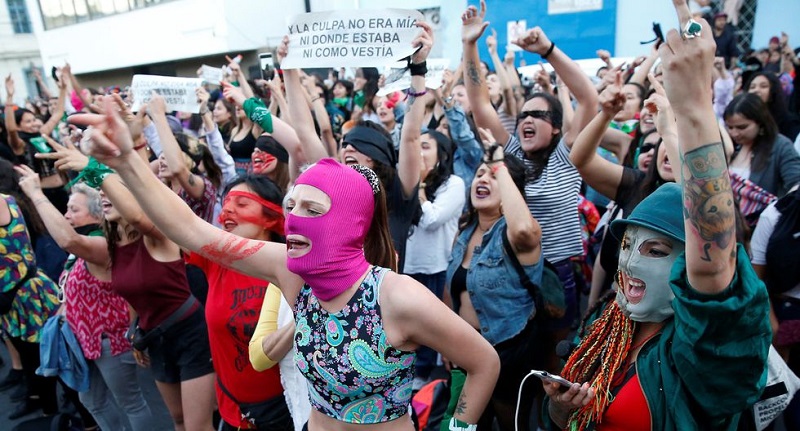 Women protestors shout slogans against security forces during a protest against the Chilean government in Valparaiso. (Reuters / Rodrigo Garrido) 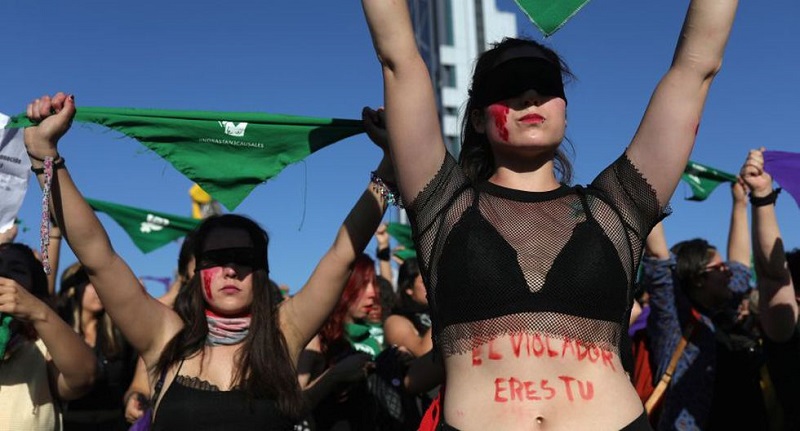 A group of Chilean feminist protesting gender violence, amidst the social upheaval that has shaken the country. 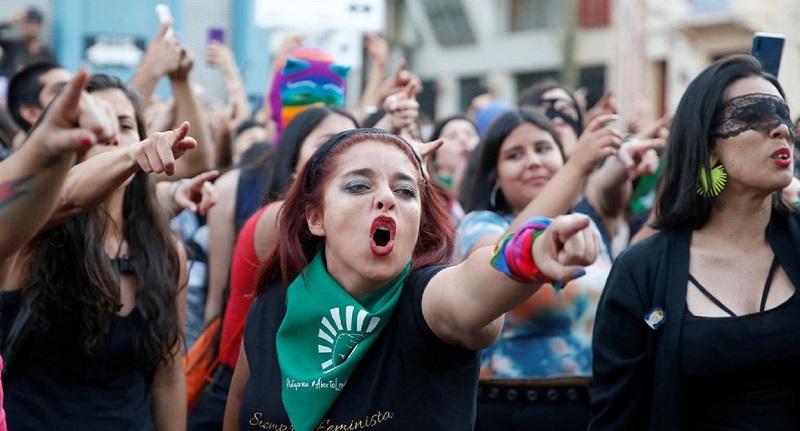 A group of Chilean feminists chanted in Santiago a message against gender violence, amid the social upheaval that has shaken the country. (REUTERS / Rodrigo Garrido).

A brief note on the uprising in Chile

The social upheaval in Chile was triggered by violent student protests against hikes in the metro subway fare, which subsequently turned into a nationwide mass rebellion. The protesters demanded that President Sebastian Pinera step down, and that the constitution of the country be rewritten by the people.

The Pinera government initially tried to suppress the protests by bringing in military police on the streets and brutally repressing the protestors. But these measures failed to control the protests and fueled more anger among the masses. Massive protest marches, road blockages, workers strikes, shutdown of all educational institutions, and resistance to the military police on the streets, in cities across Chile, became a regular feature. A massive general strike on November 12 was the most important strike in Chile in the last 30 years.

In the face of such intense rebellion, President Sebastian Pinera was forced to announce a series of concessions, the latest being a referendum in April 2020 to decide if and how Chile will rewrite its constitution. This proposal was accepted by all the mainstream political parties, including Frente Amplio, one of the leading forces behind the protests. They urged the protestors to vacate the streets and help restore peace and normalcy in the country to prevent it from slipping into anarchy.

But large sections of the Chilean masses, including the labour unions, feminist groups and social movements, the students and youths have rejected this Peace Agreement, which would keep the Pinero government in power and entrust the current ruling parties to rewrite the constitution from above. The masses are demanding the immediate resignation of the President and his government and are calling for a free and sovereign peoples’ constituent assembly to write a new constitution for Chile reflecting the aspirations of the people. The workers’ unions within the Social Unity Table – an organisation comprising of the leadership of social movements and unions, called for a national general strike and mass mobilization on 26 and 27 November against the ‘Peace Agreement’. The strike call by the unions was supported by teachers’ bodies, port workers, health workers and public officials, students and feminist groups amongst others.

Why the ‘viral video’ remained invisible in India

The video clip of this protest performance, which was uploaded a few days ago on the Instagram account of the Lastesis collective, was reproduced more than 173,000 times and the content was, in turn, shared by thousands of users on all social networks. Yet, surprisingly, this video is more or less invisible on social media in India. Such a powerful video is absent even on the accounts of popular feminist activists on social media

This insularity can be partly explained by our colonial legacy – the educated elites, including left liberals, typically accept everything originating in the West as superior and worth emulating. Many among us can quote minute details about the French Revolution while only a few among us can tell stories of the Haitian Revolution of 1791 which succeeded in ending not just slavery in Haiti but French imperial control over it. Obviously, the Yellow Vests of France are much more appealing to us than the impoverished peoples’ rebellions going on in Chile, Ecuador, Columbia, Haiti and Iraq. So, while the #MeeToo brand of feminist activism (replicated in India from the USA), which rarely questions the inherent structural violence of the state-capital nexus and their deep implication in all forms of gendered and sexual violence, the oppressive caste hierarchy of the Brahmanical social order, the institution of family based on marriage, finds natural acceptance among the urban, educated, and globalised Indian feminist, the Chilean women’s call to replicate their performance will certainly not find that kind of audience here. Is the radicalism inherent within the video, predicated as it is upon a sharp feminist critique of the state, too much for our Indian feminists? Because, condemning the patriarchal and casteist nature of the state in India would also mean that they stand in solidarity with the survivors and victims of Kunan Poshpora and the brutalized Adivasi women in Bastar. Condemning the patriarchal nature of the state in India would also mean condemning the everyday police repression and sexual violence that constitute the life for almost all marginalized communities within the nation. Last but not least, such a condemnation might also mean inviting said police repression onto one’s own self, yet standing upright and shouting a loud and clear message: “The rapist was you. The rapist is you. The Judges. The State. The Prime Minister.”

The Jyoti Singh and Priyanka Reddy rapes, horrific as they are, do not question the boundaries of our caste, class, nationalistic, and ideological belongings. As one of my Facebook friends pointed out, figures like Soni Sori resist the tag of “innocent”, which can be readily applied to Jyoti and Priyanka. In this application, they, too, are raped again and again, as they become problematic allegories of India’s national conscience against rape. Benign rebellions like #MeeToo and the occasional public outburst over selective rape incidents, though at times are minor irritants, never bothers the Indian state and can easily be appropriated within the system.

The author is a resident of Kolkata. Views and opinions expressed in this article are the author’s own.

Link and sources of all videos and photographs used in the article:

Share this
Tags : Priyanka Reddy Chile The Rapist is You NCRB data on Rape Feminism in India #Meetoo Uprising in Chile