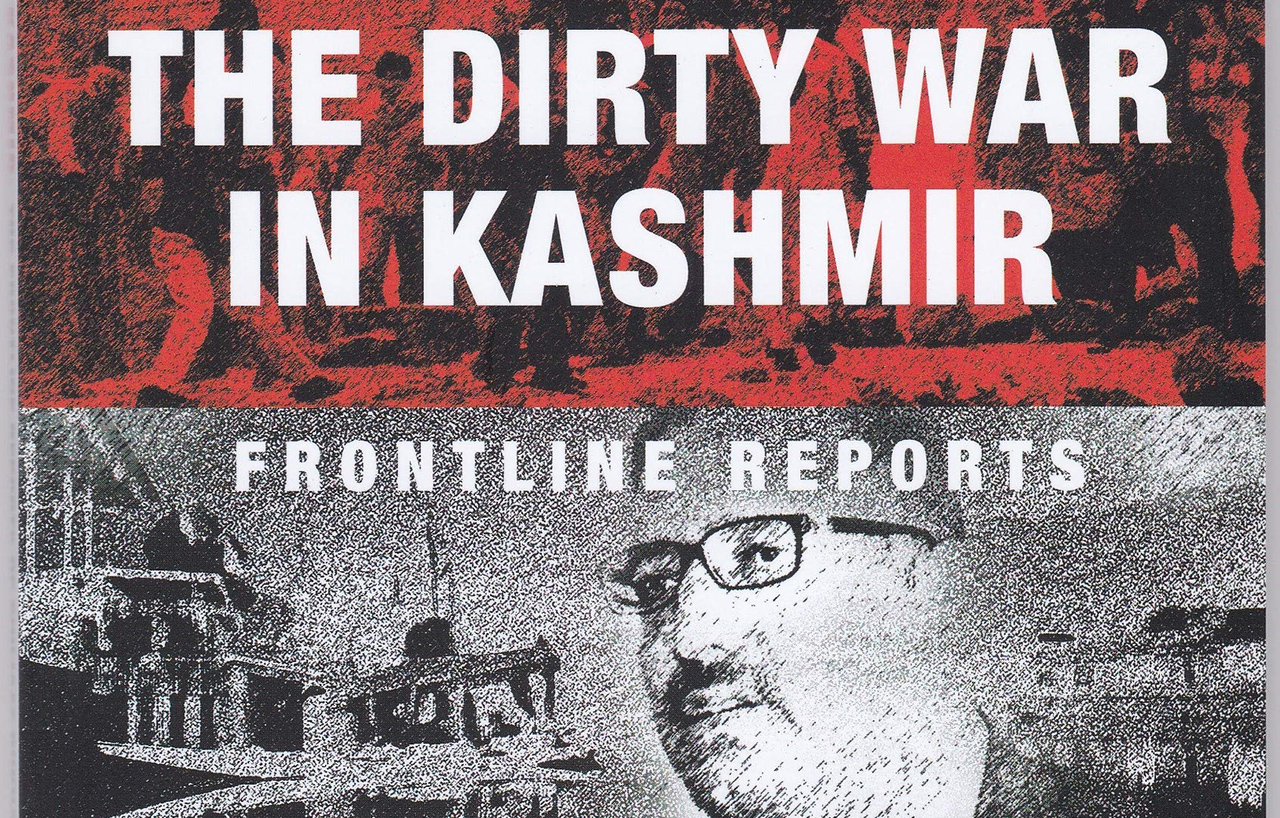 Who is playing the ‘Dirty war’ in Kashmir?

Some months ago ‘Leftword’ published an important book titled ‘The Dirty War in Kashmir’, written by late Kashmiri journalist, Shujat Bukhari. The book is a collection of his reports on Kashmir published in ‘Frontline’  from May 2017, up to his assassination in June 2018.  Although the book came out before the abrogation of Article 370 and 35A, it remains relevant in today’s scenario. Anish Ankur discusses the content of the book for our readers.

Some months ago ‘Leftword’ published an important book titled ‘The Dirty War in Kashmir’, written by late Kashmiri journalist, Shujat Bukhari. 50 year old Shujat Bukhari was shot dead by motorcycle-borne gunmen in Srinagar on 14 June 2018. Bukhari was the editor of ‘Rising Kashmir’, and also the Srinagar correspondent of the English magazine ‘Frontline’. ‘The Dirty War in Kashmir’ is a collection of his ‘Frontline’ reports from May 2017, up to his assassination.

After the abrogation of Article 370 and 35A, Kashmir has become the center of debate and discussion. Speculation is rife as to what will happen to Kashmir when the curfew and sanctions are lifted. This book helps us to understand the nature of  the problems of Jammu and Kashmir. Shujat Bukhari was considered one of the honest voices of Kashmir, and he was fully aware of the dilemmas facing the region.

In ‘The Dirty War in Kashmir’, Bukhari discussed the dangerous consequences of any attempt to abrogate Article 370 and 35A. Although he had written it before the abrogation, it remains relevant to today’s scenario. As Shujat Bukhari puts it “The concern is that the removal of Article 35A will help the BJP fulfil its long standing dream of complete integration, which eventually will make it possible for people of other states to settle in Jammu and Kashmir. Whether the pro-India and anti-India forces will stage protests together is not known, but the case has set the ball rolling not only for a greater confrontation between New Delhi and Srinagar but also for a possible revolt.”

Quoting the warning issued by the then Chief Minister Mehbooba Mufti, he wrote, “If Article 35A was tinkered with, there would be nobody to shoulder the Indian flag in Kashmir”. Going through the reports of Shujat Bukhari, we come to know how the scrapping of Articles 370 and 35A was in the air since BJP formed a coalition government with PDP in the state. As he indicated in one of his reports, “The BJP government at the centre discourages all the discussion on Kashmir as a political issue. The ruling party seems to believe that the entire state, including Pakistan-occupied Kashmir (PoK) is an integral part of India. The complete integration of the state in the Indian Union has been the BJP’s political agenda. Article 370, which gives the state special status within the ambit of the Constitution, has been a thorn in the party’s sight”

To explain the significance of 35A for Kashmir, the journalist wrote, “The significance of Article 35A is that it helps the state to retain a distinct character in terms of its residents. It actually protects a law that was passed by the Dogra monarch Maharaja Hari Singh during the British Rule to stop the influx of Punjabis into the state. The Maharaja passed the law reportedly at the behest of Kashmiri Pandits, who were powerful in the state at that time.” Quoting leading constitutional expert A.G.Noorani, Shujat Bukhari also added “Parliament of India has no legislative competence to make laws in respect of J&K State subjects/citizens as defined by law and under section 6 of the Constitution of J&K in respect of their immoveable properties.”

Going through this book the reader also gets a rough inside picture of the Kashmir valley. How people are caught between the Indian state, militants and Pakistan. Shujat Bukhari had clearly reported on how after coming to power of PM Modi, the situation worsened. He draws comparison between militants of early 90s and those of today by saying that “Journalists who have covered Kashmir since 1990 would point out that those days people would run away from an encounter site, but today they run towards the encounter site. New Delhi has lost whatever space it had gained.”

This happened due to the high handed attitude of central governments towards the people of the valley. Shujat Bukhari had clearly observed in his reports how militants are getting local support particularly after BJP’s rise to power. “In the past few years, there has been a steep rise in the number of local militants. Earlier, the ratio of foreign militants to local militants was 70:30. Today, according to officials, it is just the reverse. According to official sources, the number of youths who joined militancy in 2010 was 54. It decreased to 23 in 2011. There was a further decline to 21 and 16 in 2012 and 2013 respectively. But the number went up to 53 in 2014 and rose dramatically to 66 in 2015 and 88 in 2016.”

In one of his articles Shujat Bukhari traces ‘the Kashmir problem’ in the history of broken promises by successive Indian governments. He says, “Ever since 1947, New Delhi has appointed point men and made promises to Kashmir that have been only broken. The long list of broken promises and betrayals has disillusioned the people of Jammu and Kashmir so much that they hesitate to repose trust in this process.” Citing examples of this betrayal process, he further added, “When friction started between India’s first Prime Minister Jawaharlal Nehru and Jammu and Kashmir’s Prime Minister Sheikh Abdullah in 1953, Nehru sent his Education Minister, Maulana Abul Kalam Azad, to broker peace with Abdullah. But soon Sheikh Abdullah was dismissed and jailed.” The author continues to cite more instances of unfulfilled promises: “In 1964, when the Holy Relic of the Prophet Muhammad was stolen from Hazratbal shrine, Nehru sent Lal Bahadur Shastri and subsequently IB Director B.N.Mallick to diffuse the crisis. In 1970, Indira Gandhi sent diplomat G. Parthasarthy as her emissary to Sheikh Abdullah to broker the Indira-Abdullah accord of 1975. Power was restored to Sheikh Abdullah, but nothing was done to restore the eroded political autonomy.” But soon India Gandhi started using old methods. “Again, in 1984, Indira Gandhi dismissed Farooq Abdullah as Chief Minister and replaced him with his brother-in-Law G.M. Shah. It took J.D.Sethi to broker peace between Prime Minister Rajiv Gandhi and Farooq Abdullah, bringing the latter back to power. After an armed rebellion broke out in 1989, Kashmir went into unprecedented turmoil.”

The data provided by the author shows how incidence of militancy has changed over time. “According to official data, in 1995, around 4,390 militants were arrested and 1,332 were killed. In 1996, about 3,453 militants were arrested and 1,332 were killed. The highest number of militants were killed in 2001, a total 2,421 were killed and with it militancy started declining. As 9/11 changed the world view about the Kashmir insurgency and Pakistan began to be engaged on the Afghanistan front, the number of infiltrations decreased so much so that the Army described 2015 a zero-infiltration year.”

In different reports Shujat Bukhari had delineated how lack of political engagement left space to be filled up by militants. “Apart from the support they seem to be getting from the general public, today’s militants seem more committed than those who became militants in 1990, when all roads led to Rawalpindi. In most cases, a militant today has graduated from being a stone-pelter first. To begin with, the space for stone-pelters opened up because of the vacuum created by the absence of political engagement to address the larger issue. And the way the police have gone after them has consequently herded them into the ranks of militants.”

Analysing the differing character of militancy in North and South Kashmir, Shujat Bukhari writes: “[But] South Kashmir is also in the news because the militants themselves chose to be seen in public through social media. Burhan Wani became a poster boy for the militants as he repeatedly used social media. Though, as a senior police officer wrote soon after his killing, ‘he had not fired a single shot’. Compared with the south, the situation is grimmer in the north, where there are, according to the police, 141 active militants, of whom 118 are foreigners and 23 locals. They, however, stay away from social media and do not hype up their presence. That is the stark difference between militancy in the north and in the south.”

Shujat Bukhari also described the fate of various enquiries set up to by government to hold security persons accountable on the guilt of atrocities committed. Citing examples since 1990, he wrote, “In the Hawal massacre of May 1990, 56 civilians were mowed down by the Central Reserve Police Force (CRPF) in what became a classic case. An FIR was registered, but the case is not closed and the investigation remains incomplete. There have been an estimated 65,000 FIRs registered since 1990, but no major actions have been taken.” He further added, “From time to time, the government has admitted in the State legislature that probes have not been completed. According to a government report, in 13 years (2003 to 2015) 180 probes were ordered, but most of them were not concluded. The incidents include custodial killings, firing at civilians, gang rapes, fake encounters and massacres by the security forces.”

In this book ‘The Dirty War In Kashmir’, the reader comes across different facets of the “J&K problem”. Shujat Bukhari refrained from making judgmental remarks himself, and stuck to portraying the picture of Kashmir in a journalist way, so that the reader gets an overall view of the tragedies of this unfortunate part of the world.

Anish Ankur is a social and cultural activist from Bihar.

Share this
Tags : kashmir Shujat Bukhari The Dirty War in Kashmir Article 370 and 35A