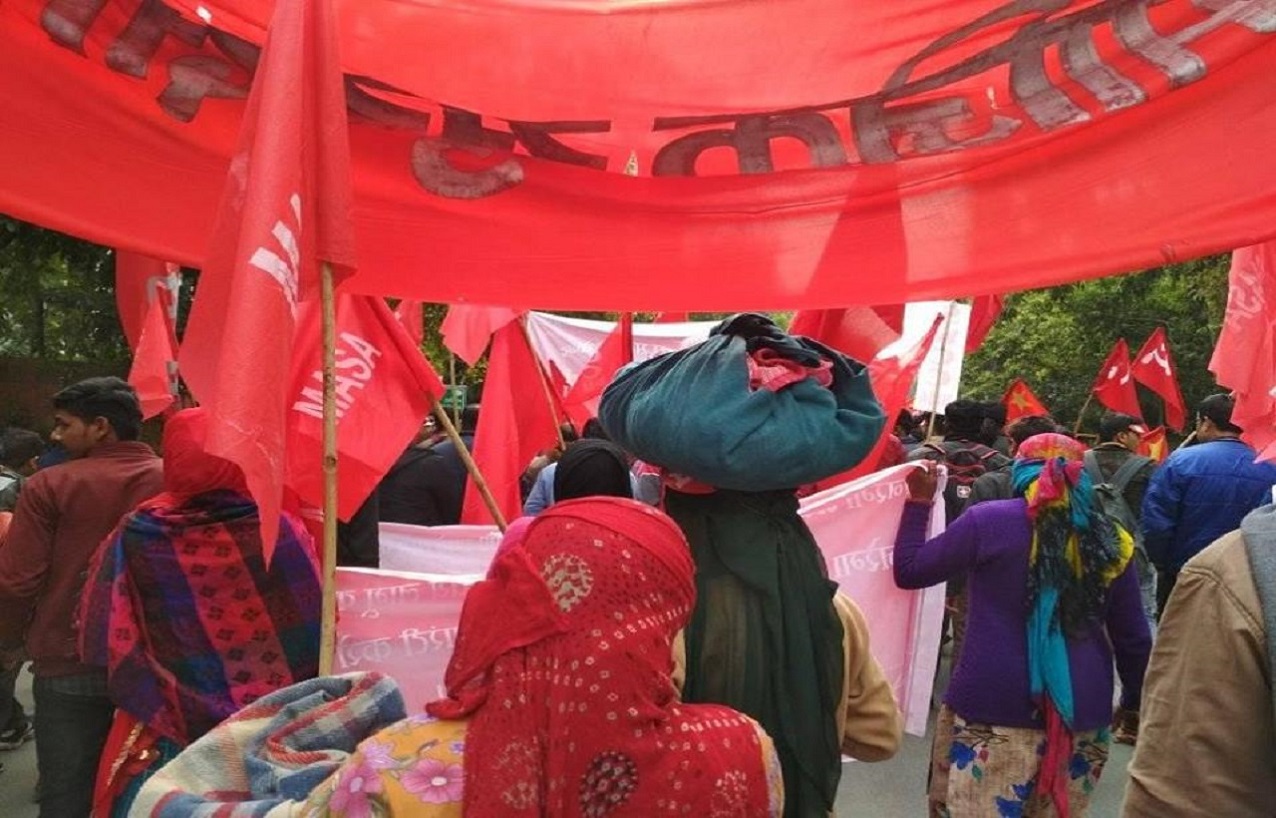 Amid protest from workers and unions all across the country, the Modi government has passed the Wage Code Bill and introduced the Occupational Safety Bill in the Lok Sabha, while two more Labour Code Bills are awaiting to be passed soon. These Labour Codes have been formed by amalgamating 44 existing Labour Laws in the country.On the pretext of reforming and simplifying a chaotic mess of labour laws, these amendments are yet another ploy of the government to curtail the legal rights of the working classes. MASA (Mazdoor Adhikaar Sangharsh Abhiyaan) is organizing an All-India protest demonstration on 9th September 2019, across 20 states of India against this latest attack on the working class. A GroundXero Report.

The Modi government continues to tread on its anti-worker, pro-capital path. Along with privatization of government sectors including railways, telecom, ordinance, mining etc, resulting in layoffs and retrenchment of lakhs of workers,it has now setting in motion a series of major changes in the Labour Laws of the country. The Labour Laws, recognizing and stating the rights of the workers in various industries were a result of long unrelenting struggle of the working class. The government under intense pressure from the Corporate lobby has now decided to replace these 44 Acts by 4 Labour Codes. Out of these Codes, the Code on Wages has been passed by the Parliament last month, and the remaining three are in process.

It is to oppose this action of the government that protests are being organized under the banner of MASA (Mazdoor Adhikaar Sangharsh Abhiyaan) – a collective forum for struggling working class forces – in 20 different states of India. The main demands of the workers are:

* To make Labour Laws for all – organized-unorganized-informal workers;

* To implement 8 hours work a day, double wage for overtime, social security for all workers and right of the workers to get unionized.

The statement released by the workers collective forum says: “For the government, ‘national interest’ means the interest of crony capitalists like Ambani-Adani.  If ‘national interest’ is to be considered as the interest of the working people of the country, then the working class will have to organize and intensify militant workers struggle against the existing system of capitalist-slavery.”

In the context of ongoing protest by nearly all working class organisations and trade unions, we try take a look at how these Labour Codes will impact the working class of the country.

Converting the workers into bonded labourers

In his first term, PM Narendra Modi described himself as ‘Mazdoor Number One’ but the task of looting the rights of workers under the guise of ‘Shramev Jayate’ continued unabated. During the second term as well, the Modi government has not missed a single anti-worker target that it had promised to the Indian and foreign capitalists. Most prominent among these is the latest amendments to the existing Labour Laws.

At the core of these amendments lies the policy of ‘Hire and Fire’ of labourers. Providing labourers to the domestic and multinational companies at very cheap wages and giving companies the right to employ and sack workers at their convenience at any time, ending employment of the permanent nature by converting them into fixed terms and recruiting trainees in the name of skill development, ending the responsibilities of the principle employer for contract workers, abolishing the legal right of different sections of temporary and informal workers to raise their demands by simply not recognizing them as ‘workers’, allowing contract labourers to work in permanent nature of jobs, ending the provision of equal pay for equal work, free the owners from the provision of criminal proceedings for violation of labor laws, allowing arbitrary fixing of wage hours by the companies, preventing workers from organizing strikes and forming unions, etc. are the various means of exploitation ingrained in these Labour Codes.

An important aspect of this entire exercise is the abolition of the existing 44 central Labour Laws by the central government and converting them into 4 codes. These codes are –Labour Code on Wages, Labour Code on Industrial Relations, Social Security and Welfare Labour Code, and Labour Code of Occupational Safety, Health and Working Conditions.

From the Second Labour Commission to the Labour Code

These codes are based on the treacherous recommendations of the Second National Labour Commission (2002) presented during the Bajpayee led NDA government. In the face of massive protest by Central Trade Unions all across the country, these recommendations could not be transformed into laws at that time.

After returning to power for the second term with huge majority, the Modi government is now bolder than ever. As soon as the Lok Sabha election results were out, BJP leader Subramanian Swamy announced the need for immediate change in the Labour Laws. The NITI Aayog Vice-President Rajiv Kumar promised the domestic and foreign capitalists, implementation of speedy economic reforms including labour reforms even before the oath ceremony of the new government has taken place. Eventually, the government announced 4 Labour Codes while presenting the union budget. Two of the codes–Labour Code on Wage 2019 and Labour Code of Occupational Safety, Health and Working Conditions 2019 – have already been introduced in the Lok Sabha on 23rd and 30th July respectively. The first one was passed by majority support in both houses –showing the general anti-worker inclination of the entire Parliament.

Spaces likely to be affected by the Labour Codes

Apart from directly affecting the workers in the private companies, these codes are likely to adversely affect the workers in the railways, oil industries,ports, airline services, telecom, banking and insurance companies, corporations and boards, undertakings and sister companies of the central public sector establishments. It is worth mentioning here that the unemployment rate has shot-up to the highest level in the last 45 years. These codes are going to add fuel to this fire.

The Codes will safeguard the companies

According to the Codes, the ‘digitalization of vigilance’, that is, digitization of the system of conducting inspection on the companies, will decrease the hassles of conflict of laws. But in reality, digitalization will lead to almost complete abolition of vigilance. Inspections will no more be done in response to specific information or complaint, instead they will take place as per lists of workplaces generated through computerized algorithms.

Further, the owners will receive notices of inspection well in advance. The newly appointed ‘inspector’ – under the newly coined term ‘facilitator’ –will help the owners deal with the Labour Law conflicts and will possess the rights even to waive contempt of the Labour Laws by the company. Under the changed scenario, it will be really tough to criminalize any actions regarding labour practices committed by the company owners.

Finally, with the aid of digitization of registers, returns, forms etc., the companies are now allowed to make their own rules to a large extent that the workers are bound to follow, and self-certify their own conduct towards the workers – thus cutting the workers completely off from the Labour Department and the Judiciary.

The Bills will legalize contractualization of labour

In this article we will look at the Bill on Labour Code on Wages in further specific details.

The Pay Wage Bill was first introduced in the Lok Sabha on 10th August 2017, which was then referred to the standing committee of the Parliament. The committee’s report was submitted in December 2018, but it got postponed due to the Lok Sabha elections. The same Bill has now resurfaced bearing the name Labour Code on Wages 2019. It has been enforced on 8th august after receiving the approval of the President.

Through the Wage Code Bill, Modi government has raised the national minimum wage from 176 rupees to just 178 rupees per day, which is way less than the amount of 375 rupees per day initially suggested by the Union Labour Ministry. The Bill has completely changed the formula for wage determination, which was decided in the 15th Indian Labour Conference. The Union Minister of State for Labour has announced a national minimum wage of Rs. 4,628 per month (Rs 178 daily) on 10th July. It is worth remembering that the Seventh Pay Commission had recommended Rs. 18,000 per month (now 22,000 per month) to be implemented as the minimum wage from 1st January 2016. It is also worth noting that in July 2018, the Expert Committee of the government itself had suggested the minimum daily wage to be Rs 375, based on the price index. Modi government undermining its own committees of experts is nothing but a big fraud with the working class of the country.

Earlier there was a tripartite system for fixing the minimum wage, in which the workers’ representatives from different sectors, employers and representatives of the government together determined the minimum wage. During the 5 years of Modi’s first term, the government completely ruined the tripartite system, diminishing the participation of the workers in the process and destroying the Indian Labour Conference, which dealt with the matter of minimum wage.

Overlooking various kinds of employments and skill levels, a uniform criteria has been announced for the determination of minimum wage for all workers.

The Wage Code is dangerous specially because:

While the mainstream media is busy spreading the toxic mix of hindutva and masculine nationality, these struggles of the masses are the only ray of hope during these troubled times. 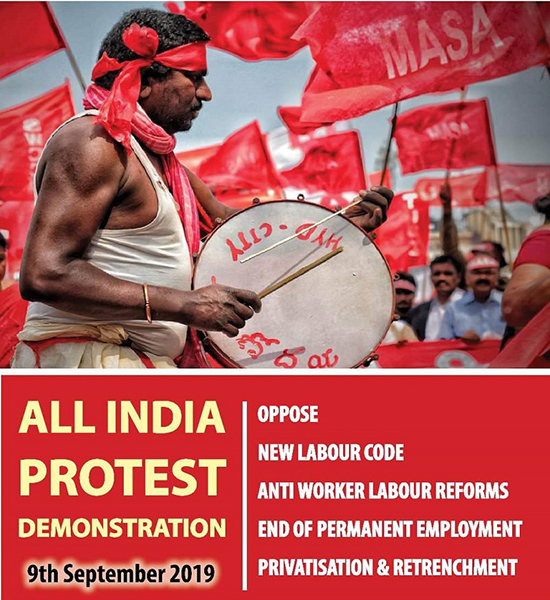