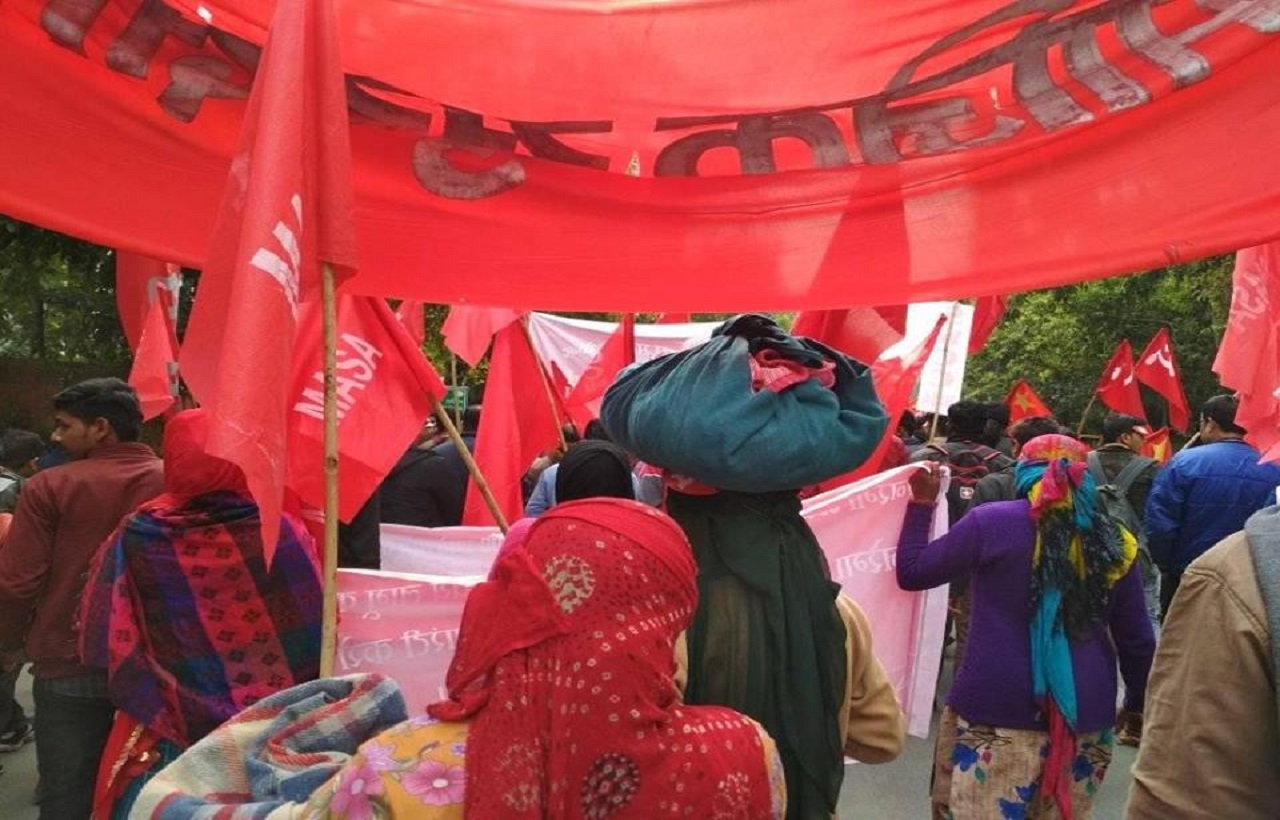 With the entire nation under the grip of war hysteria, thousands of workers march in Delhi pressing for their demands

In large measure, the success of ultra-nationalist jingoism is in its keeping people strangled within its terms, dictating the issues and controlling the political discourse. Post the Pulwama incident, the ruling regime and the opposition parties, aided and abetted by the mainstream media, has carefully hijacked the political discourse. It has turned the conversation away from pressing issues faced by the people, to communal polarization with a militaristic machismo. This demagogy of the ruling classes can be encountered by centering the very basic issues of working people which they want to suppress. The workers rally in Delhi called by MASA (Mazdoor Adhikar Sangharsh Abhiyan), was  a step in that direction. A GroundXero report.

Today, on 3 March 2019, several thousands of workers from many states across the country, from various sectors (organized, unorganized, rural, service, etc) took out a rally in Delhi from Ramlila Maidan, and marched to Sansad Marg, protesting neoliberal attacks on working people by the fascist ruling forces, amidst its current war hysteria.The rally was to protest and resist the increasing neoliberal attacks on working class rights, falling real wages, intensifying division of workers on various lines, state repression and criminalization of labour, and loot of common resources. 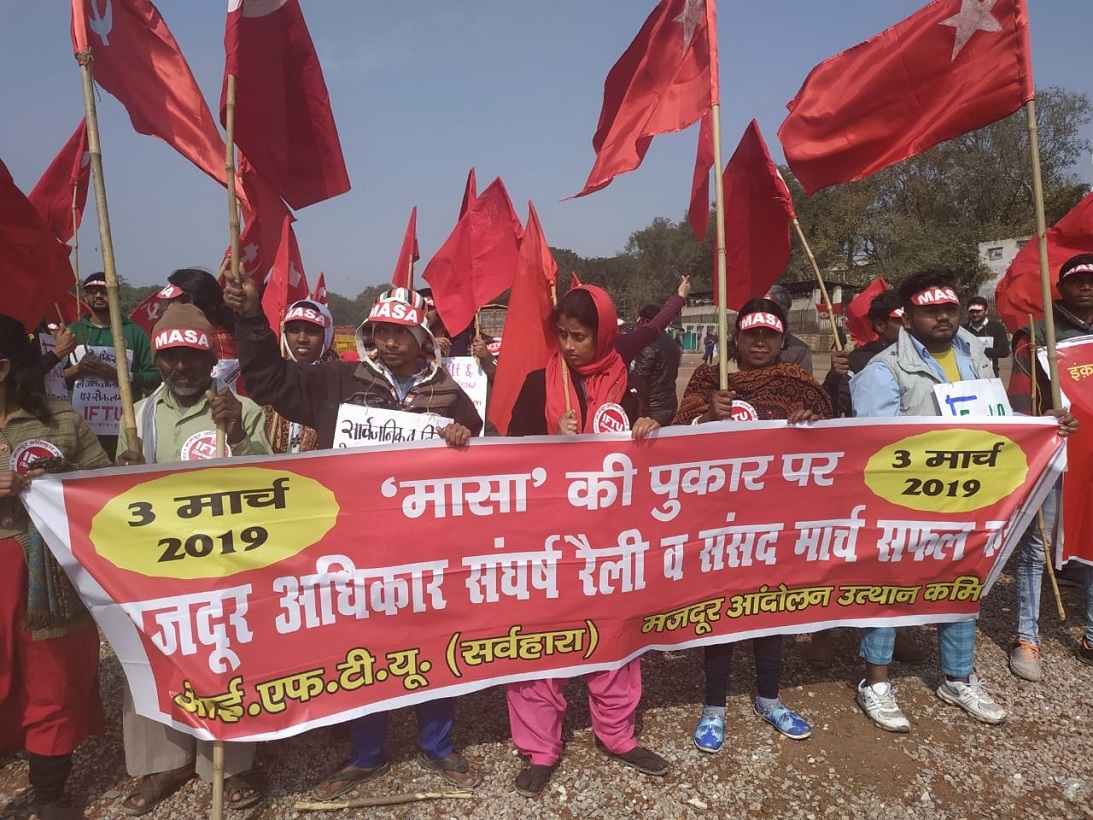 The rally was called by MASA (Mazdoor Adhikar Sangharsh Abhiyan), a broad coalition of working class forces from across the country, grounded in various historical and ongoing struggles, which have come together over the past 3 years on a 17-point Charter of Demands. The main demands of the workers are :

* Halt and withdraw Privatization of PSUs

* Ensure the Right to Form Unions 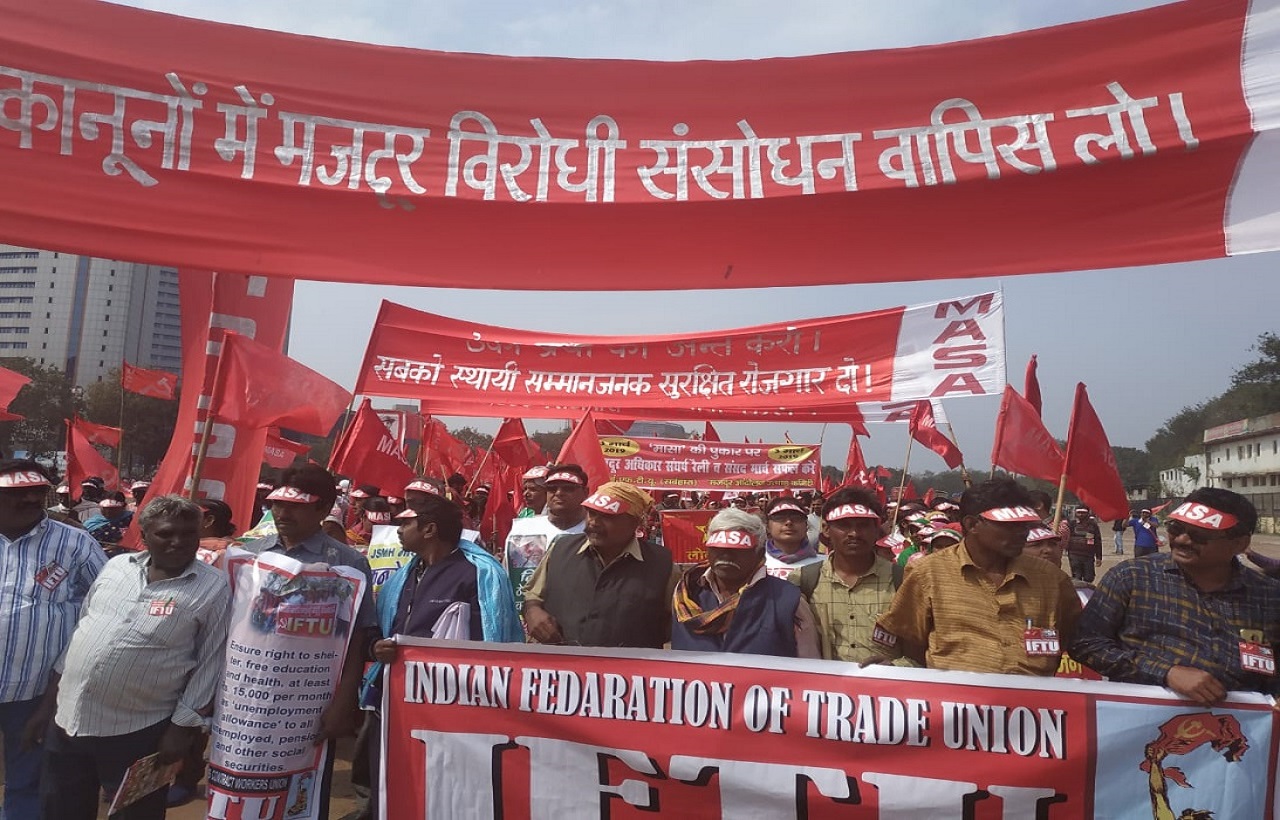 Two and a half years back, on 26 August 2016, 14 workers’ organisations came together to form MASA in a Convention in Delhi and started with focusing initially on these central issues of a workers’ movement – against anti-worker labour law reforms, demanding minimum wage of Rs. 22,000 (calculations based on the price level on 1st January 2016), abolishing the contract labour system, calling for permanent workers for jobs that are permanent in nature, attending to the demands of unorganized sector workers, and to build an uncompromising struggle against anti-worker neoliberal policies. 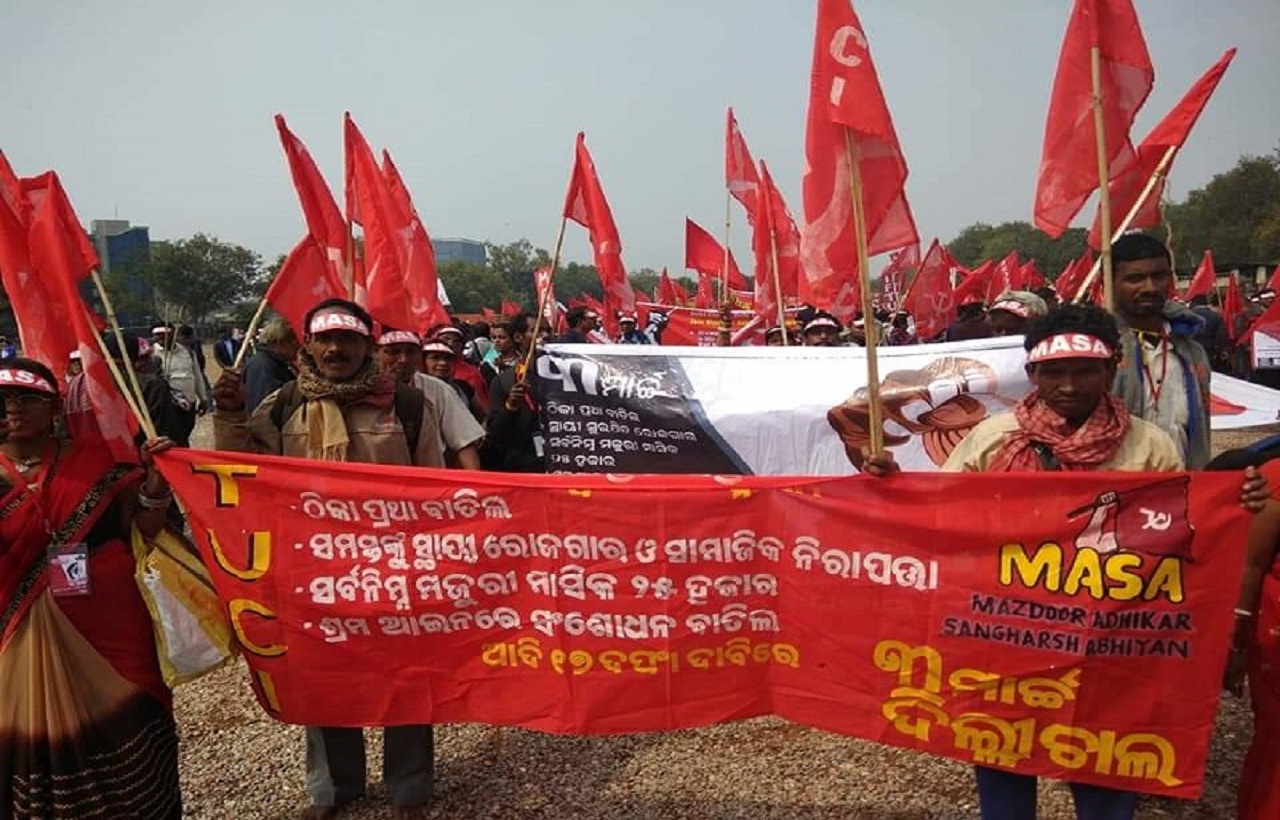 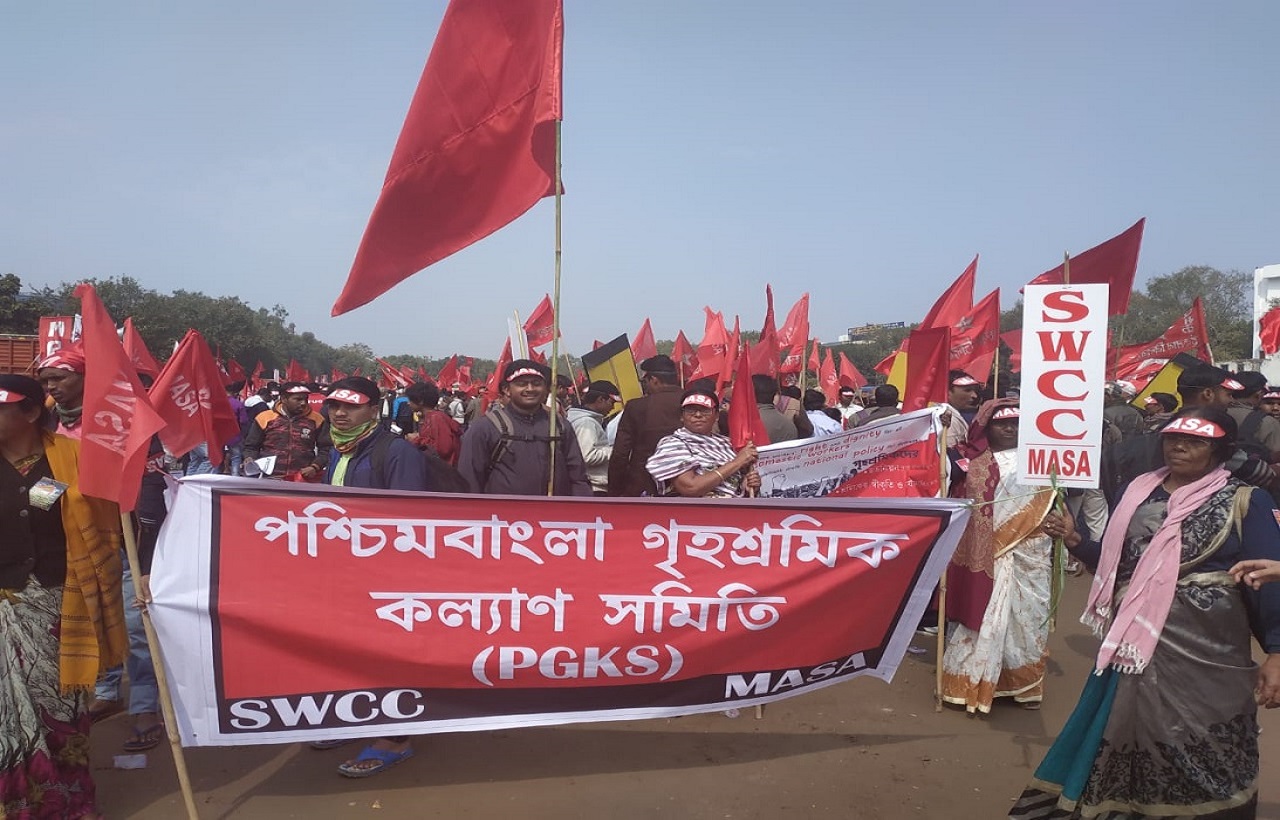 After the rally ended, the workers were addressed by the leaders of participating trade unions. Worker leaders like Ajmer from Maruti Suzuki Workers Union, Manmohan from Daikin Air-Conditioning Mazdoor Union, Asha Pradhan from Chaay Bagan Sangram Samiti (Darjeeling), Suraj from the workers union in Micromax and others addressed the workers. 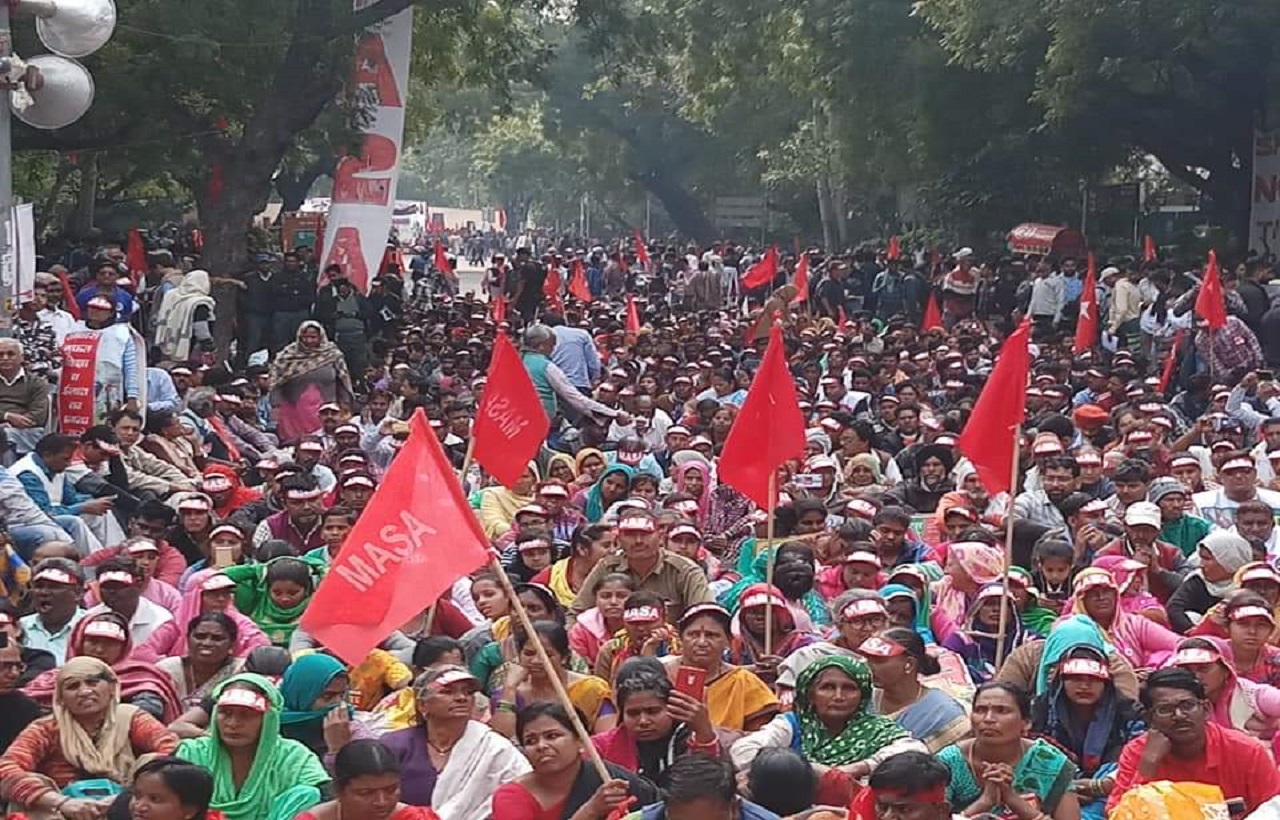 Currently, when the present ruling regime is wreaking havoc on the toiling masses of the country, and working class agenda/issues are almost absent from our current discourse in society and politics, this assertion by workers in the heart of the capital is a very important development. Today increased exploitation through massive contractualization, falling real wages and standard of living of working people is accompanied by intensified repression & criminalization of working class voices of protest and resistances. In this context, and that of ongoing ultra-nationalist war hysteria, the rally of workers in Delhi, their political assertion, and efforts of formations like MASA to raise working class voices is significant. 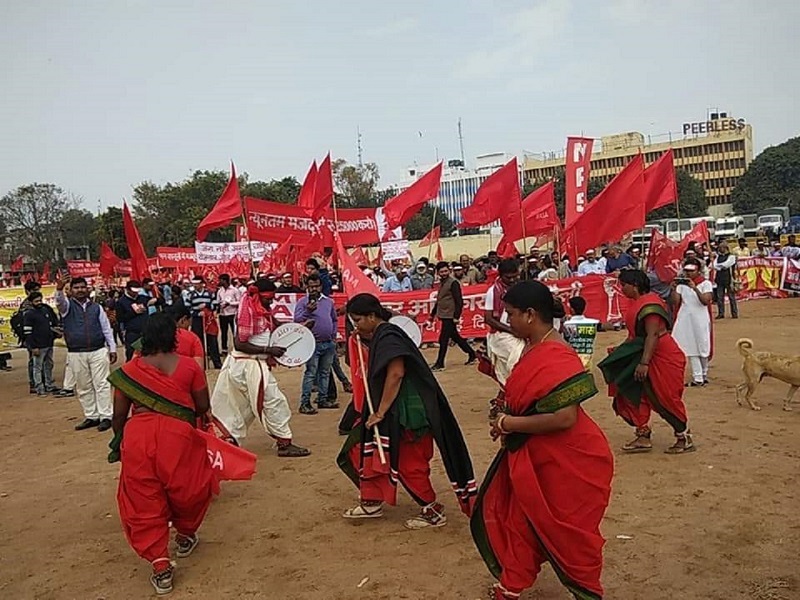