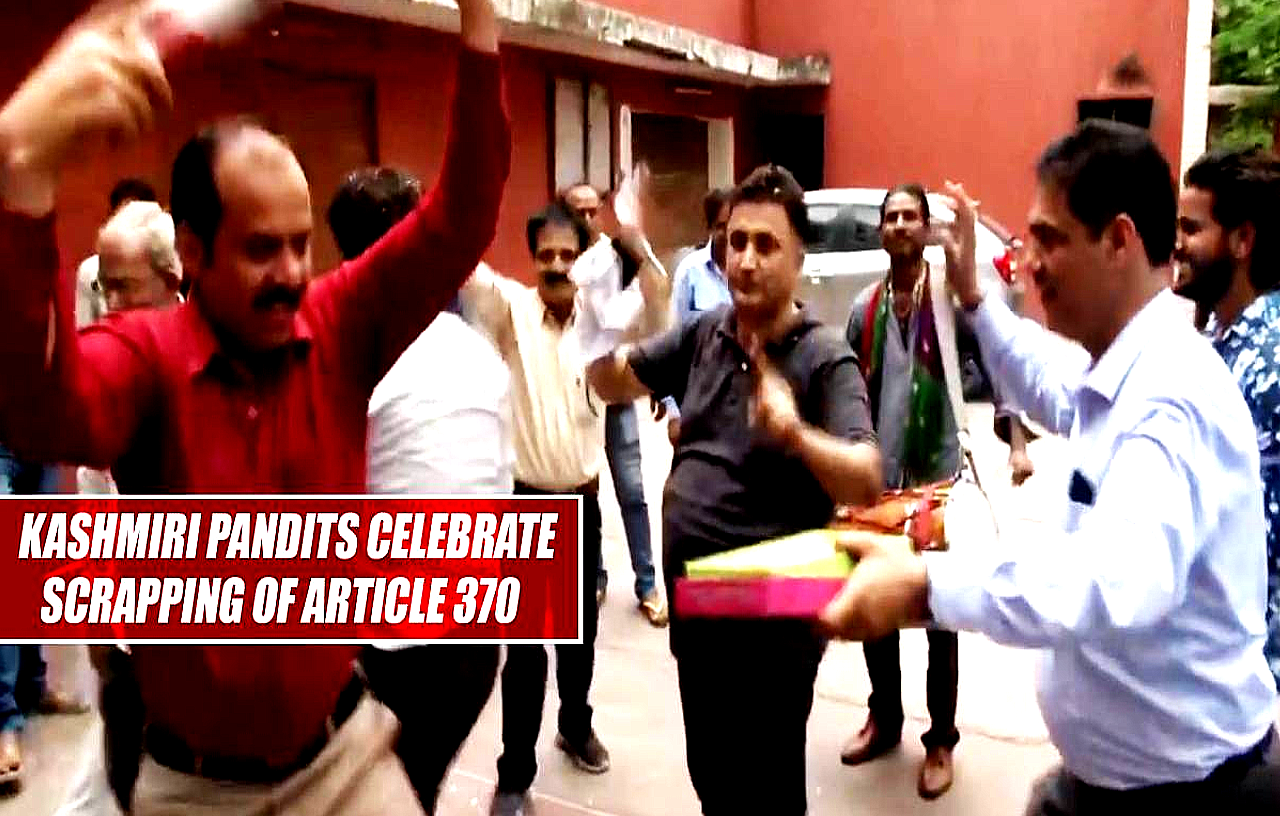 On Hindutva’s Quest of Kashmir and the Politics of Article 370: Part One

William James (1842-1910) once remarked, “Whenever you’re in conflict with someone, there is one factor that can make the difference between damaging your relationship and deepening it. That factor is attitude.” The recent undemocratic maneuvering, the subsequent constitutional coup and finally the murder of Indian democracy in the broad daylight by anulling the statehood of Jammu and Kashmir along with the abrogation of Article 370 of the Indian Constitution without any intimation, deliberation, or consent of the Kashmiri people is the reverberation of a majoritarian, authoritarian attitude of the Modi-led government in India. This haughty and authoritarian attitude of the Modi government will deepen the conflict and will be apocalyptical for Kashmir and its people, contrary to Amit Shah’s fantasy of seeing ‘peace and development in Kashmir’ and also be cataclysmic for the democratic essence of India as well.

The removal of Article 370 was always a priority of the BJP’s Hindutva agenda, evinced by its holding prime position in the BJP election manifesto.  Hindutva, a narrow ideology based on the exclusion of non-Hindus (Adivasis, Muslims and Christians), an aggressive and militant nationalism, and the establishment of Hindu hegemony in India always visualised Article 370 as the hindrance to realising the dream of a Pan-Hinduism. The Modi government’s recent decision to abrogate Article 370 and Article 35A is more about realising the Hindutva dream than serving national interests. With a brute demeanour, the current regime’s yearning for a Hindutva empire has brought South Asia back to the distressing and traumatic events of the Partition of 1947, which created India and Pakistan and handed Kashmiris the tribulation of being divided and fought over by these two states.

When it All Began: Partition

To understand the importance of Article 370 for Kashmiris and some Indians who are resisting its abrogation, and Hindutva’s aversion to it, one must traverse through the pages of history and to reach the time when it all began, the Partition. At the time of partition, when the new dominions of India and Pakistan were created through the Indian Act of 1947, there were about 600 princely states ruled by indigenous rulers. The Independence Act abolished the suzerainty of British over these princely states and their sovereignty was restored. The choice was given to them to accede to either of the newly created dominions, taking into consideration the religion of the populace, geographical proximity, and trade relations, Jammu and Kashmir, with a Muslim majority population, a long shared border, and the numerous trade routes between it and the new dominion of Pakistan, should have acceded to Pakistan. According to M. J. Akbar, the former Minister of State for External Affairs and BJP MP, India’s Iron Man and its first Home Minister Sardar Vallabhbhai Patel was not so keen to have Kashmir in India. According to Kashmir: Behind the Vale, (Viking, New Delhi, 1991) this was because of the Kashmir valley’s overwhelming Muslim population: “Patel felt it would be far better for the ninety-six per cent Muslim Kashmir Valley to go to Pakistan,” (p. 102) contrary to Modi and Hindutva’s aspiration which aggressively maintains that Patel was interested in Kashmir being a part of India.

However, Maharaja Hari Singh, the last ruler of Kashmir decided to accede to the dominion of India against the consent of the Kashmiri people on 26 October 1947 through an Instrument of Accession (IoA). Governor-General Lord Mountbatten accepted his accession on October 27, 1947.  A lot has been spoken and written about Hari Singh’s decision to accede to India, and one of the major factors responsible for Hari Singh’s decisions that has been forwarded by many Indian historians and writers is the “tribal invasion” at the behest of Pakistani state which later led to a war in 1947 between India and Pakistan. India’s policy at the time of partition was that wherever there was a dispute on the question of accession, it should be settled in accordance with the wishes and aspirations of the people rather than a unilateral decision by the ruler of the princely state, as was the case of Kashmir. With India’s acceptance of the IoA, Lord Mountbatten stated that “It is my government’s wish that as soon as law and order have been restored in Kashmir, the question of the State’s accession be settled according to the aspirations of Kashmiri people.” On November 2, 1947, speaking on All Indian Radio, Pandit Jawaharlal Nehru said, “[The] fate of the State of Jammu & Kashmir is ultimately to be decided by the people. The pledge we have given not only to people of Kashmir but also to the world. We will not and cannot back out of it.”

He reverberated the same promise plenty of times between 1947 and 1951, in concurrence with the then Home Minister Sardar Vallabhbhai Patel. When the war of 1947 had broken out between India and Pakistan, India’s Premier Jawaharlal Nehru took the Kashmiri cause to the United Nations (UN) for mediation, and it is here that Kashmir was recognised as a bilateral dispute between India and Pakistan. On November 25, 1947 Nehru spoke at the Indian parliament: “We have suggested that when people of Kashmir are given a chance to decide their future, this should be done under the supervision of an impartial tribunal such as the United Nations Organization.” The United Nations’ resolutions of August 13, 1948 and January 5, 1949, proposed a plebiscite for resolving the Kashmir dispute. These resolutions laid down the principles and procedures for a free and impartial plebiscite under the auspices of the UN. Both India and Pakistan accepted the resolutions. Because of this dispute, the Indian government regarded accession as purely “temporary” and provisional, as stated in the Government of India’s White Paper on J&K in 1948.

Keeping in mind the temporary and provisional accession of Kashmir to India, the Jammu and Kashmir Constituent Assembly drafted a bill which, with subsequent modifications by the Indian government, was finally adopted by the Indian Parliament in 1949 as Article 370. It was the sacred thread which connected India to Kashmir, while ensuring a special status and internal autonomy for Jammu and Kashmir. Indian jurisdiction in Kashmir was limited to the three areas: defence, foreign affairs, and communications. This was confirmed by Sheikh Abdullah in the 1952 Delhi Agreement, and the State was allowed to have its own flag.

As mentioned above, the accession of Kashmir to India was provisional and temporary, so Article 370 was always meant to be annihilated when the Kashmiri people were given their right to self-determination, to be exercised by a plebiscite or a referendum. It was not temporary in the way it has been projected by the BJP.

The history of Kashmir after accession and the induction of Article 370 is tempestuous and bruised, marked with India’s deception, betrayal, rigged elections, installations of puppet governments, vengeful Governor and Presidential rules, and the Kashmiri people’s resistance and their fight to realise their right to self-determination. The Indian state, rather than adhering to its promise of carrying out a plebiscite, consistently adulterated the autonomy enjoyed by Kashmir and diluted the provisions of Article 370 plenty of times through a series of more than fifty presidential orders spanning well over half a century. A fact which many Indians doesn’t know: till 5 August, 2019, when the “special status” of J&K was removed, as many as 94 of 97 subjects in the Union list were already extended to Kashmir and more than 260 articles of the Indian constitution were applicable in Jammu and Kashmir.

The Symbol of a Provisional and Temporary Accession

Despite all the intrusions and adulterations, Article 370 still has symbolic importance to the people of Kashmir. For Kashmiris, it was a testimony to the provisional and temporary accession of the erstwhile princely state with India, and to many Indians who detest its abrogation it was a symbol of India’s federalism. The unilateral revision of Article 370 effectively dissolves any legal basis for Kashmir’s accession to India and has turned Kashmir into a forcibly annexed territory, all this without the consent of its people.  The move is unconstitutional as well — Article 370 can only be revoked with the consent of J&K’s Constituent Assembly. Since the state was under President’s rule, the Indian government effectively gave itself permission to abrogate Article 370. This in every way means the murder of democracy and the betrayal of Kashmiri aspirations.

Since Article 370 was already hollow and was only important for its symbolism, it was Article 35A which was dearer to Kashmir’s people. The article was enacted as a continuation of a pre-1947 state law (1927, State Domicile Act) in Kashmir that granted Kashmir’s permanent residents citizenship rights, including the right to buy land and apply for government jobs. After accession, the State Assembly had the sole right to determine who the permanent residents of Kashmir were. Article 35A was meant to protect Kashmir’s Muslim-majority status; for Kashmiris, it was the last thing they were holding onto. The dissolution of Article 35A represents more grave danger. Its abrogation has unfolded the worst nightmare that Kashmiris could have imagined in their already nightmarish existence. Indians can now buy property and land in Kashmir, and drive out the local population. There is now a fear of demographic coup which could even alter the political aspirations of the new ‘Kashmiri people’. The Rashtriya Swayamsevak Sangh has openly stated that Kashmir’s Muslim majority represents a “problem” and has proposed that opening up Kashmir to Hindu settlers from India would permanently put an end to the Kashmiri demands for right to self-determination.

Why not, say Himachal Pradesh?

Jammu and Kashmir wasn’t the only state that was granted such a special status. There are other states too, which enjoy such a ‘privilege’ under Indian constitution. The states of Nagaland (Article 371A), Assam (Article 371B), Manipur (Article 370C), Sikkim (Article 371F), and Mizoram (Article 371G) are given the same privileges which Jammu and Kashmir was granted under Article 370. Himachal Pradesh, which is currently ruled by a BJP government, had a provision like Article 35A of Kashmir, where no Indian citizen other than the residents of Himachal Pradesh can acquire property or buy land. One must ask: what danger could Article 370 or 35A have unleashed on India that it became necessary for the Indian state to abrogate it? Why wasn’t there any uproar or resentment from Indian people, or indeed the Indian state, on the same privileges given to other states?

The answer lies in the politics of Hindutva. The abrogation of Article 370 and 35A was nothing but another chapter in the Hindutva project, woven out of lies and deception. The conflict in Kashmir has always catered to and fostered a culture of jingoism and hypernationalism in India. Kashmir was made the emotional nerve of the country under the aegis of Hindutva politics. It was woven into vote-bank politics by many Indian electoral parties, in particular the BJP. The current regime, which has failed in all spheres of governance, seeks refuge in the Kashmir issue. To hide its weaknesses and failures, it has consistently lied to its people, first by manufacturing a “security threat”, and second by riding on this threat to inspire in the Indian populace a jingoistic fervour, thereby diverting everyone’s attention from its failures. Whenever the BJP is unable to deliver an effective and purposeful government, it is likely to in the future compensate for its failures with symbolic gestures towards its rhetorical promise of “one nation, one culture”.

In the second part, we discuss the history of Hidutva’s interests in Kashmir…

The author is from Pulwama, Kashmir.