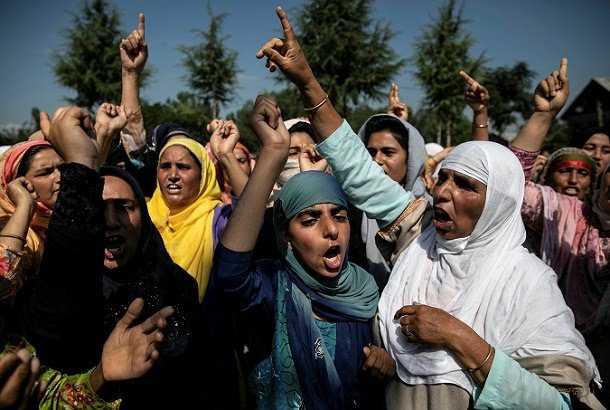 ISM-Palestine Stands in Solidarity with Kashmir

The International Solidarity Movement (ISM) is a Palestinian-led movement committed to mounting a non-violent resistance against the systematic oppression and violence faced by Palestinians at the hands of the state of Israel. The movement, which was founded in 2001, offers support to grassroots-level resistance against the apartheid policies, via participation in non-violent demonstrations, and also extensive documentation and reportage for local and international media outlets about life in the occupied territories, the human rights violations committed by the Israeli military, the illegal evictions and demolitions, etc. Below is a statement of solidarity from the ISM, which underscores the striking similarities between the Israeli occupation of Palestine, and the Indian occupation of Kashmir.

We, the International Solidarity Movement, express our solidarity with the people of Kashmir as they resist the annexation and occupation of their land by Indian military forces.

We recognize the same methods of oppression and occupation used by the Israeli government in Palestine being used by Narendra Modi’s administration against the people of Kashmir. Like Israel, India uses “terrorism” and “religious extremism” as a pretext for state terrorism, arrests without a warrant, shoot-to-kill policies, the use of live ammunition against non-violent protesters, and collective punishment against civilian populations. Israel also plays a direct role in the occupation of Kashmir; India is the top buyer of Israeli- made weapons. Israeli agencies including secret service Shin Bet, which are responsible for human rights abuses and killings of Palestinians, also provide training for Indian military units suppressing the people of Kashmir. In a move eerily reminiscent of the illegal Israeli settlements built on stolen Palestinian land, India’s BJP party has recently advocated for building exclusively Hindu settlements in Kashmir, which is now possible by Indian law with the scrapping of Article 370.

Kashmiris’ struggle for the right to self determination and the right to live in peace and safety in their own land dates back to 1947, when India annexed the region. Article 370 provided the people of Kashmir with certain limited rights and a small measure of autonomy, though the reality on the ground has always been that Kashmiris have lived under the occupation of 700,000 Indian soldiers, making it the most densely militarized zone on earth for decades.

The annulling of Article 370 by Narendra Modi’s administration on August 5, 2019, violates a 2015 court ruling by the High Court of Jammu and Kashmir and the Indian Supreme Court on April 3, 2018, both of which ruled that Article 370 was a permanent provision which could not be repealed or even amended. Following the annulment of Article 370, the number of Indian soldiers occupying Kashmir has increased to nearly 800,000. Internet, mobile services, landlines, television, and media access has all been suspended, which together with curfews that cut access to essential supplies like food and medicine, have put the 7 million residents of Kashmir under virtual house arrest and devoid of basic democratic and human rights.

We express our strong support and solidarity with the people of Kashmir as they resist the occupation of their homeland and violation of their rights by the oppressive and racist policies of the Indian government.