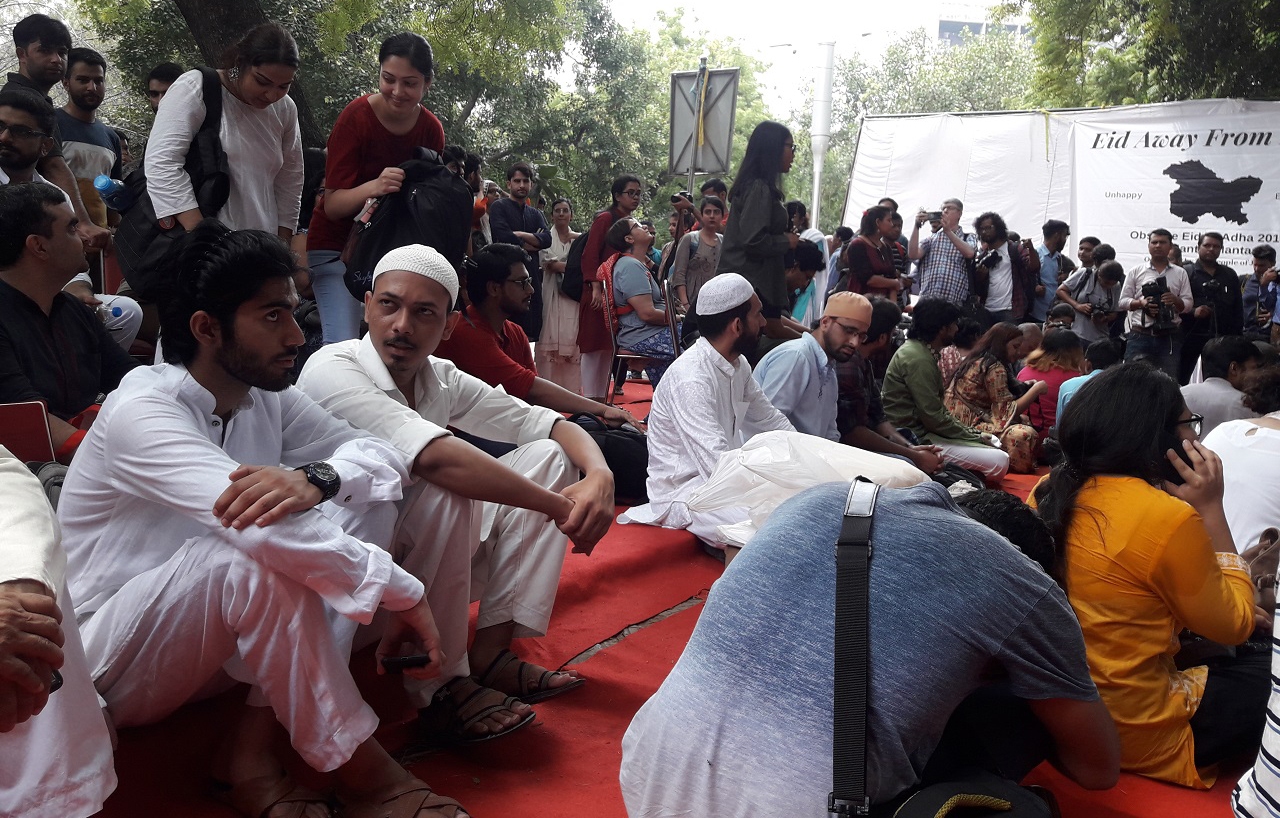 “EID Away From Home”

“The truth is, our conversations, our efforts to create solidarity, and even our protests, today, exist in enclosures. The ones we have created, over the years. The ones in whose construction we have been complicit in, over the years. It is up to us to try and break them,”  writes Pinki Saha.

There is an allegory in this somewhere. The allegory that tells us, over the years, the strikewala JantarMantar, has become that “safe space” for us — India’s left-liberal, protesting elite. I know, this is a strange coinage. I feel ludicrous writing it. I am sure, reading this term will feel equally weird. But, this is what it is. This is the space where events can be held with police permission and police presence. This is the space where protests and issues come to be tamed, domesticated. This is also where the protests come to become routinized, ritualized.

“Eid Away from Home” consisted of all these characteristics one can associate with a JantarMantar protest. There were enough familiar faces – India’s (neo)liberal cultural elite, the academic elite, the social media elite. At one point, one was left to wonder, if those present in solidarity far outnumbered those personally affected. Yet, there was something different about this event too. The difference lay in the fact that the event was about Kashmir. 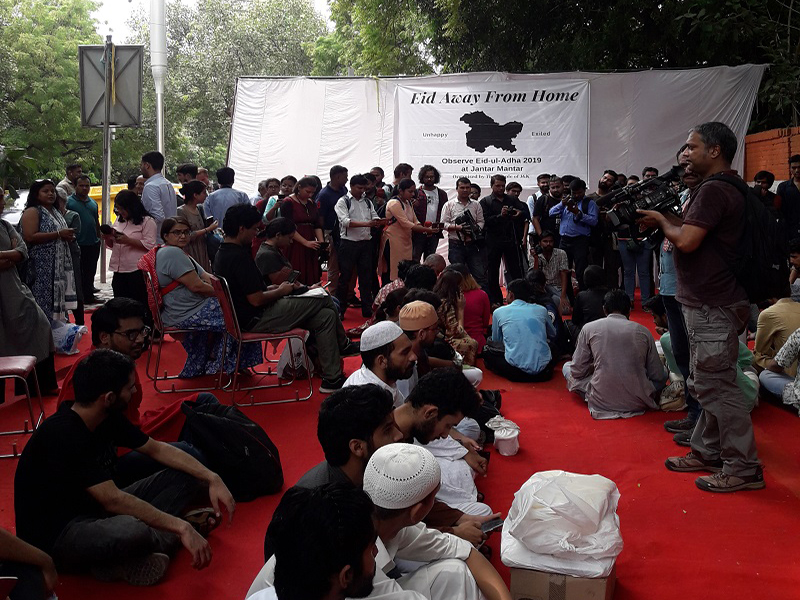 The call that had gone around on social media was simple. Given the information and communication blackout in Kashmir have made it impossible for Kashmiris in Delhi to observe Eid with their family and community members back home, the strikewala JantarMantar would be the substitute space to observe the festival. There was no political message attached to the call so far. But, the spectre of the information blockade loomed large on the whole event. What loomed large was the fact that almost all the Kashmiris who are attending the event, are living amongst huge amounts of uncertainty, without really knowing what is happening at home. So, in a strange kind of a way, in spite of the effort of the organizers to not engage in any direct political debates, the event turned out to be political from the very beginning.

And, although the event culminated in the sharing of a collective meal, every morsel of the biriyani that was swallowed, came with a reminder that we are standing in front of a national emergency. And, this is just the beginning.

Of course, there are bigger ironies that accompany any event about Kashmir within the “safe”, police-sanctioned space of JantarMantar. Obviously, the number of police, RAF and CRPF deputed for a call to observe Eid by sharing stories and a meal, far outnumbered any other “ordinary” political event. But, then, there is yet another irony in holding an event about Kashmir within a “safe” urban enclosure, a state-designated space for protest. Because, at the end of the day, what looms large within the  Kashmir conflict, is a multi-layered politics of space. Because, at the end of the day, the ongoing militarization in Kashmir has created many spatial enclosures. And, none of them happen to be particularly very “safe.”

Because, spatial enclosures, this way or that, are also political enclosures. In the same way, Kashmir resides at the margins of the mainstream Indian political unconscious – forever present, yet rarely spoken about unless in the languages of claims and claiming – yesterday’s event, too, happened in the margins of the nation’s capital. As the rest of the city went on almost uninterrupted, with its everyday life and living.

Yet, there was a difference.

That difference lay in the fact that for a brief couple of hours, every Indian present in the event, had to confront the nation’s imperial, militarized legacy. That difference lay in the dazed looks, angry glances and tears in the faces of the Kashmiris present – expressions that are difficult, nay, impossible to write about in our familiar political language. There were two overarching emotions that cris-crossed during the event then – the imperial guilt of the Indians, and that eerie combination of rage-helplessness-sadness of the Kashmiris. The emotion for which it is difficult to find a single word in English language.

For most of the non-Kashmiris who had come, there was no new information to be had. The siege is on its DAY 10. There is almost a total information blackout in and from Kashmir. No telephone lines. No internet. Most, if not all, of our Kashmiri friends have not heard from their family, friends and loved ones for the last 10 days. A curfew is on. There have been protests in Srinagar, and possibly other parts of Kashmir. There have been casualties and arrests, although no specific information about any of these can be attained yet. There is a wide gap between the reports being published by foreign media and Indian mainstream media. But, in the absence of any new information, what was there, was a sense of gloomy silence. Can one face the imperial legacy of one’s nation through the sharing of a meal? What does solidarity mean in these circumstances?

In the surrounding area, possibly because it was Eid, there were gigantic national flags that were being sold. As they were in the other parts of the city. After all, that’s the age we are living in. An age when every religious festival is also a political event, tied up to our definition of nation, this way or that. In the last resort, that was what this event turned out to be too. In a slightly different kind of a way. A congregation situated in the cracks between religion, politics and a faint effort to come together. Between two or more different ideas of nationhood and nationalism.

It was announced, that this event was not convened by any political parties, but was rather an assembly of interested, affected and concerned individuals from J&K. Most of the Kashmiris present were young – students from educational institutions in and around the Delhi-NCR region. Although, there were older faces too. There were few families with little children. There was food – plenty of it – mostly brought in by the attendees themselves, based mostly on the messages that circulated in social media beforehand.

The event began with a solemn declaration – “We are not here to celebrate Eid, we are here to observe Eid. What has happened in Kashmir, is not a matter of celebration, not for anyone in J&K. So, it’s not Eid […] If there is anything to celebrate, it’s our resilience, it’s our hope, it’s our strength, that’s also being carried back home.” In fact, throughout the event, and later in the day, most Kashmiri friends I would meet, would insist, they are not feeling like saying “Eid Mubarak,” because this is not Eid. This is not the Eid they know of, or remember.

An obvious question that remained by and large unsaid, yet hung in the air – can we imagine a similar siege during Diwali? Or, DurgaPujo, for that matter? Can we imagine such enforced political silence during any of the major Hindu festivals and rituals?

And, to be very very honest, the answer is, no. We can’t.

“Eid Away from Home” – tacitly, indirectly – asked that question.

The question whose shadow haunted almost every speaker’s speech in the event. There was a range of political opinions. Some emphasized that this is not an event to speak about the Article 370 or its constitutional and legal history, some appealed to the democratic history of India, and its deep-rooted traditions of religious syncreticism, some read poems in both Urdu and English. A lot of the speakers broke down as they spoke. A speaker insisted, in a shaking voice, and with tears in his eyes, “I can’t cry, because I don’t want to come across as weak.”

Indeed, if there was an emotion that surrounded the event, it was heaviness. A heaviness accompanied by a sense of uncertainty. A sense of loss of language by almost all concerned. A loss of language – political and otherwise. A friend pointed out, most of the attendees, other than the Kashmiris, are people who do not need to hold jobs or are students or academics, with flexible schedule. “The only reason why I could be here, is because I have lost my job last month. Most of the private companies do not have a holiday allocated for Eid.” Indeed. Even as we then stand face-to-face with an Israel-like solution in Kashmir, as many interlocutors have commented, there has been an increasing Hinduization of our national holiday calendar. We indeed are living during an age when every religious festival is political. This way or that. And, we have let that slide. Unprotested, in silence.

It is not that we, as progressive-minded, Hindu Indians, don’t have Kashmiri friends. We do. Some very dear ones. We do fall in love with Kashmiris. We marry them. With or without 370 and 35A. We get involved in relationships as human beings. Like anywhere else in the world. But, the truth is also that, the stench of our imperial complicity cannot be resolved through our personal loves, our personal friendships. Neither can it be covered up by sharing a meal on Eid with fellow Kashmiris.

A real politics awaits us. And, “Eid Away from Home” could be the beginning. Or, not.

While coming back, we stop at a paan-ka-dukan. Me and my friend from Kashmir. He, too, has not heard from his family for the last week and a half. He asks the shopkeeper, “Bhaiya, aap ko Kashmir mein zamin kharidna hain?” (Brother, do you want to buy land in Kashmir?) “Nahi bhaiya, mere paas to bas yeh dukan hi hain. Paan bechta hoon, zameen kharidne ka paisa kahan se aayega?” (No, I just have this shop. I sell paan, where will I get money to buy land?) “Lekin jo hua hain, who sahi hua hain?” (But, what has happened, is that right?) My friend keeps pushing. “Haan, woh to sahi hua hain. Ek hi desh mein un logon ke liye alag kanoon kyon rahega?” (Yes, what has happened is justified. Why should there be separate laws in the same country for them?) Neither one of us dares to continue the conversation. Indeed, the truth is, our conversations, our efforts to create solidarity, and even our protests, today, exist in enclosures. The ones we have created, over the years. The ones in whose construction we have been complicit in, over the years.

It is up to us to try and break them.

Pinki Saha is a writer and a teacher.