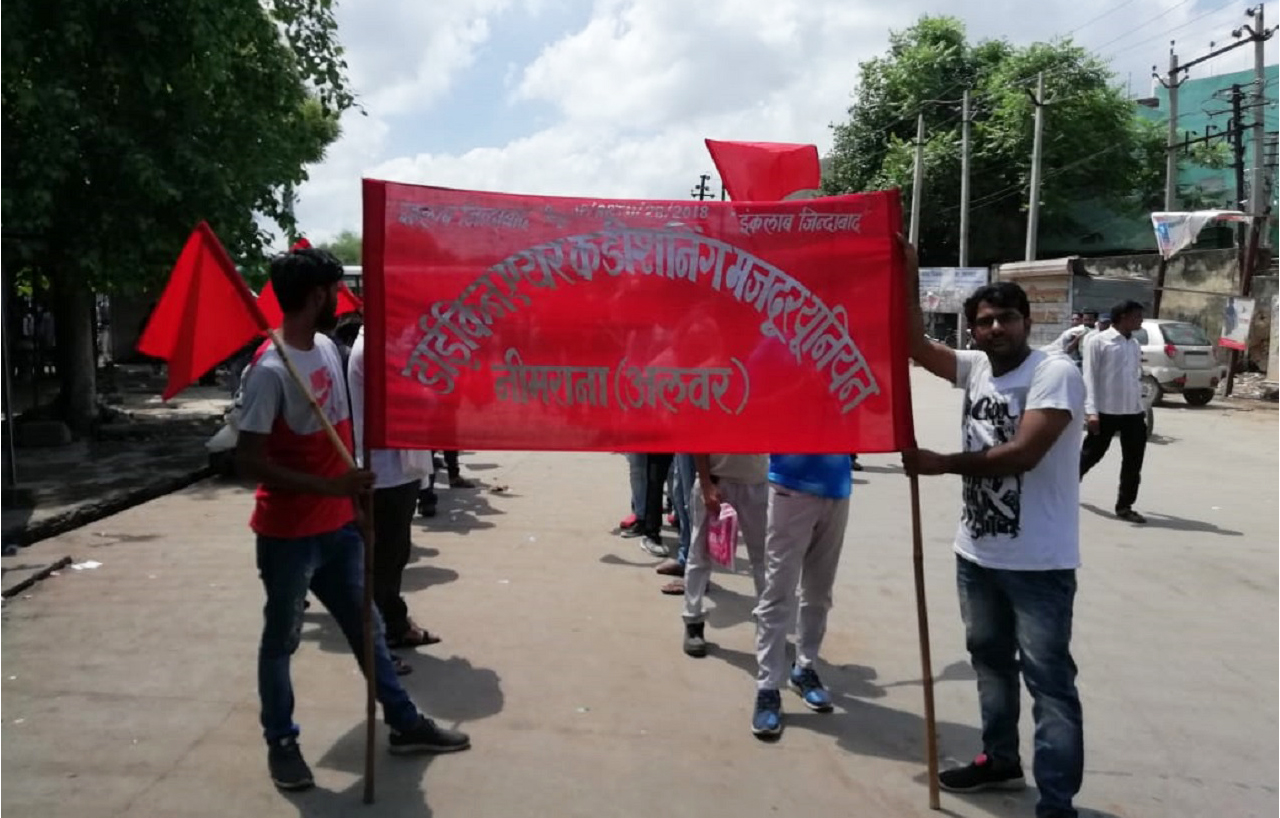 Daikin workers in the Neemrana industrial area are fighting a long and bitter struggle against a highly exploitative management for 6 years now. In the face of increasingly frequent violation of workers’ rights and various socio-economic oppressions imposed by both the management and the state, the permanent and contract workers of Daikin Airconditioning India Pvt. Ltd. joined forces to stage a protest rally on 8th August.  A GroundXero report.

The struggle of Daikin’s workers in the Neemrana industrial area continues. Since 2013, the Daikin struggle has been emerging strongly in the organized sector against  oppression by the company management. The main activities of the movement have been struggling for the right to form unions, organizing contract workers, establishing the unity of contract and permanent workers, building solidarities with the workers of other plants in the same region, etc. At times like this, when the collaborative oppression of the managements and the state against the workers in this country is at its peak and the working class movement is unable to organize effective resistance in any of the big companies in the organized sector, the Daikin workers have been organizing strikes, rallies, and meetings continuously for the last 6 years in the Neemrana industrial area, constantly challenging the exploitative capitalist forces.

For the last few months, the Daikin struggle has been in a state of indecision regarding its goals. But the workers are once again uniting to take the movement forward. A dharna and relay hunger strike that began on 20th February this year continued for 170 consecutive days in front of the Collector’s Office in Alwar and ended on 8th August. The same day, a rally was organized from the Alwar bus stand to the Collector’s Office, where a memorandum was handed over to the Collector. 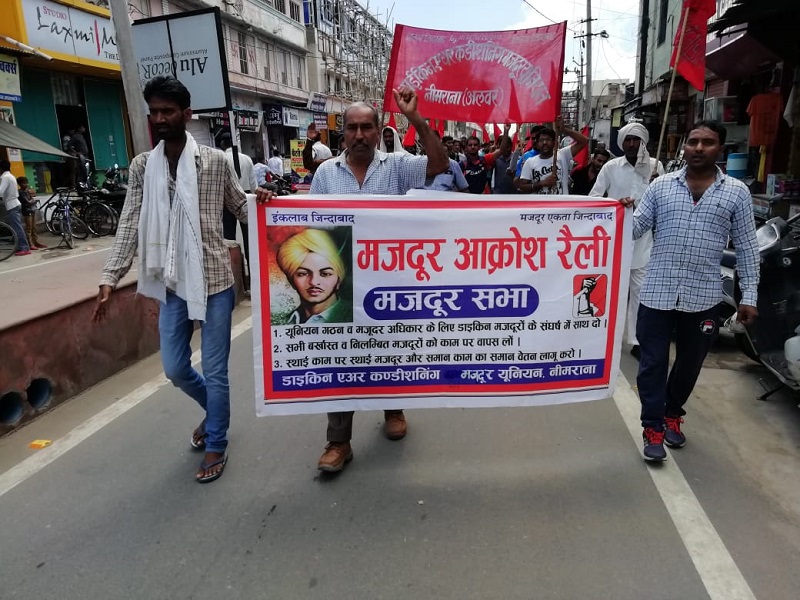 Meanwhile, the Modi government combined 44 Labour Laws into 4 Labour Code Bills, against which the Daikin workers took part in a nationwide protest on 2nd August in Neemrana, submitting a memorandum to the Neemrana Sub-Divisional Magistrate. The various recent anti-worker amendments to the labour laws and changes in company policies regarding permanent jobs and salaries represent an unprecedented and coordinated assault on the working classes. The legal battle against management seems to have hit the wall. Increasingly, mass struggle seems to be the only way to reclaim the workers’ rights. The Daikin rally on 8th August, despite the presence of a heavy police force throughout the industrial area, indicates that as well.

In the past, during a general strike on 8th January this year, the workers of Daikin Airconditioning India Pvt. Ltd. in Neemrana were brutally lathi-charged by the police and bouncers, injuring 46 people, including the President and the General Secretary of the union. The police, however, registered a case against around 70 protesters and the Daikin management enforced an illegal lockout at the plant. Eventually, 56 workers were suspended by the management, and 35 workers were imprisoned under Sections 307 and 333 of the Indian Penal Code, out of which 18 stayed in jail for 50 days.

The Daikin management issued transfer orders to 15 workers, including union representatives, to other states as soon as the Daikin workers’ union was registered after the High Court directive. During the 8th January protest, 426 permanent and about 500 contract workers were employed inside the plant. On 3rd May, after 4 months of struggle, the management took back only 348 permanent workers, leaving 56 permanent workers, 15 transfer workers and about 500 contract workers suspended. 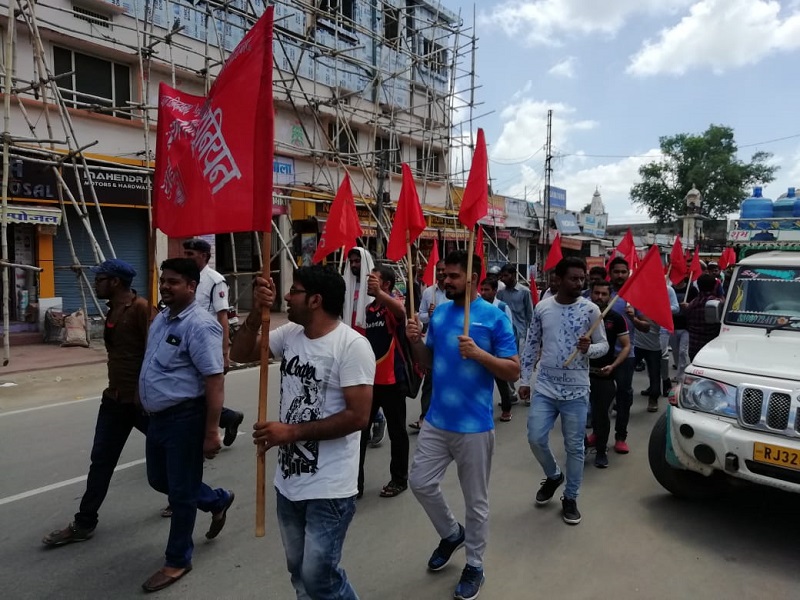 At present, the Daikin workers are being subjected to constant harassment at the plant. The management has even implemented severe restrictions on basic necessities such as water or toilet breaks and the workers are constantly being issued warning letters for minor mistakes. In a recent counterfeit of negotiation, the world’s number one airconditioning company has increased the monthly salary of its permanent workers by a meager amount (between ₹ 800 to ₹ 900 per month). All this has led to a build-up of serious grievances among the workers.

However, despite the layoffs and lockouts, the collective struggle of the permanent and contract workers of Daikin can be viewed as an example to be looked up to. 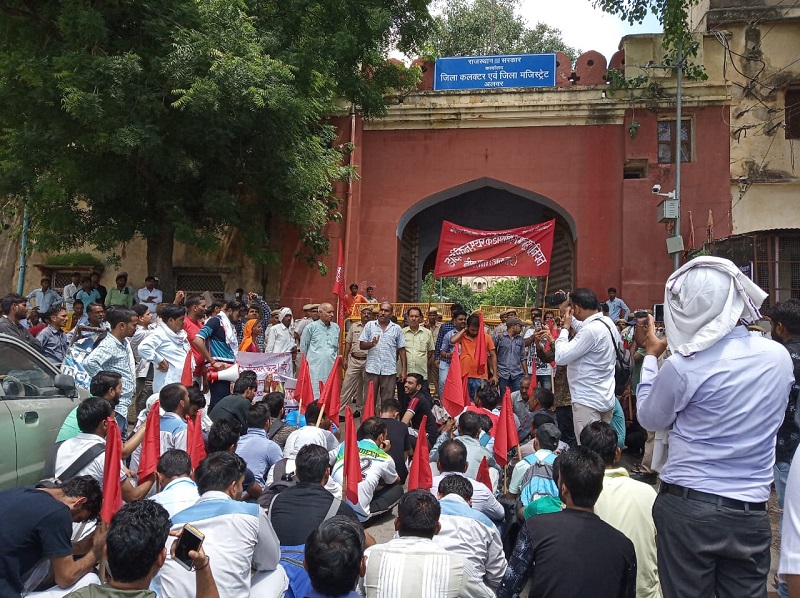