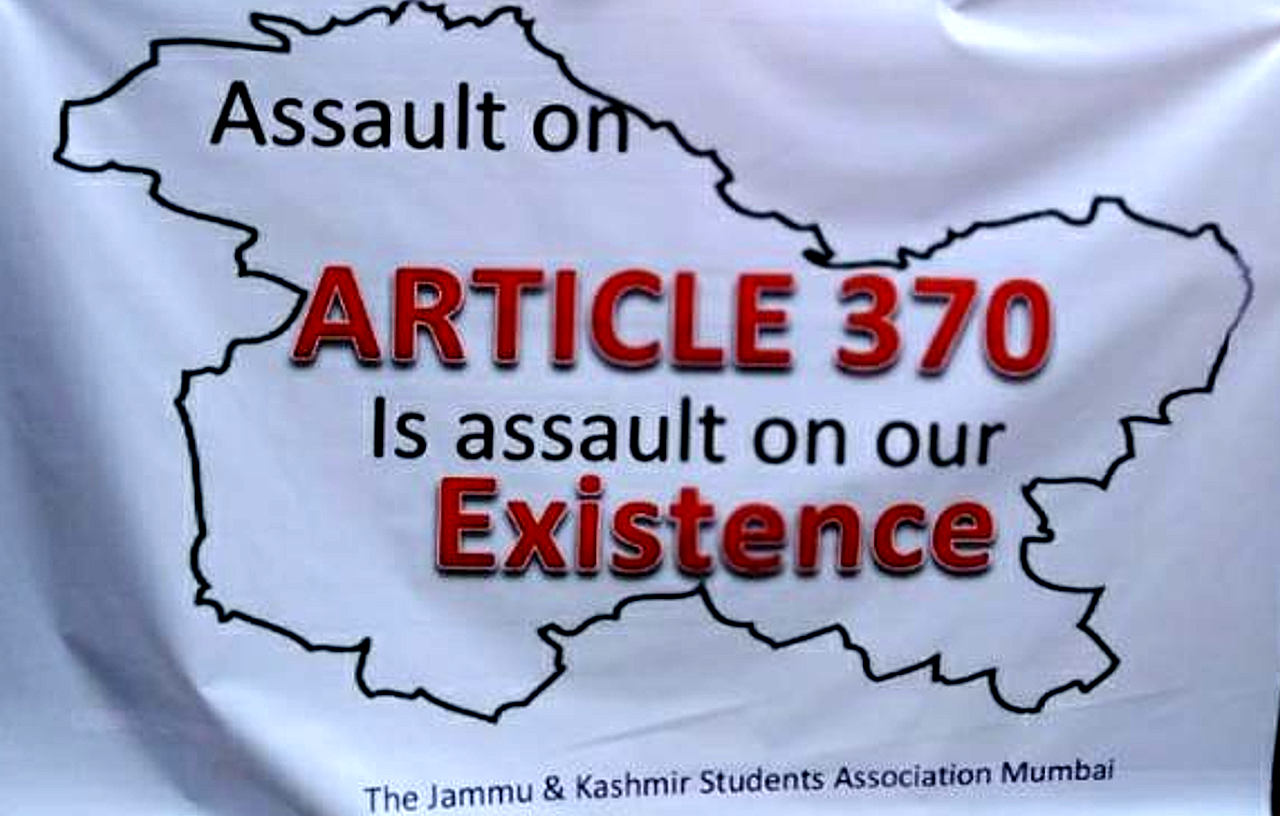 On Wednesday, several Left and Democratic groups in Mumbai, including the CPI, CPI(M), DYFI, Janata Dal (Secular), and the Jammu and Kashmir Students’ Association Mumbai organised a meeting at Azad Maidan, Mumbai, protesting the scrapping of Articles 370 and 35A of the Indian Constitution, violation of the statehood of Jammu & Kashmir, and the unprecedented lockdown that has stunned the valley, and the world, for six days now. No communication is being allowed between those inside Kashmir and those outside. “Please do something to stop the ethnic cleansing of Kashmiris and our culture! Please help us get connected with our parents, please help us talk to them!”, said one student at the protest. “We were also told that low rank Kashmiri policemen are being sent back to their homes and their weapons are being seized as Government has fears that may be they will use their guns against Indian forces,” said JKSA Mumbai spokesperson.Till the time of publishing this report, neither of them have been able to get in touch with their parents, since Sunday. Given that information from out of Kashmir has been totally blocked and a media vacuum has been created, this GX report is an attempt to document what Kashmiri residents currently living in Mumbai are saying. 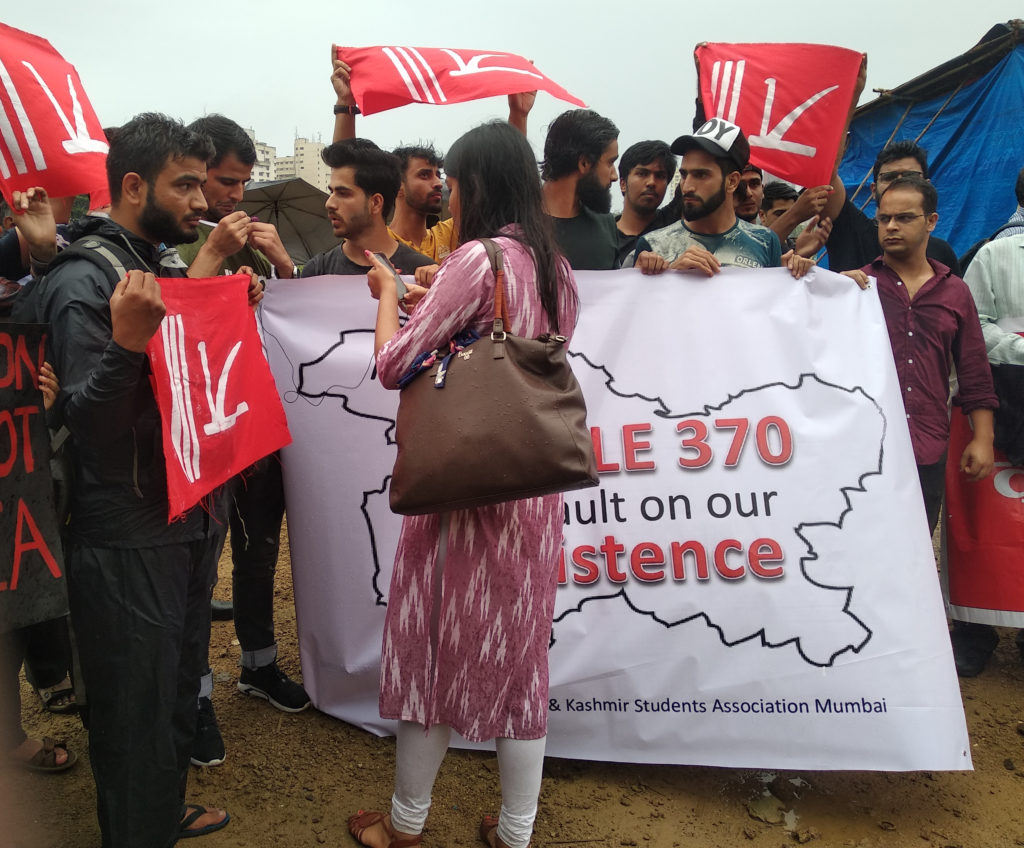 Here are the main parts of the student’s speech at the Azad Maidan meeting [We have translated the original Hindi speech into English]:

“For the last 3 days I have no whereabouts about my parents. There is an Urdu word called ‘Wasiyat’ – which means last wish. My last conversation with my mother was her wasiyat. She said, “In case we die, you know what you should tell your next generations. Tomorrow if there is a mass genocide in Kashmir, you know you have to take forward our history and culture.” Can you imagine getting stuck in a city like Mumbai with your mother’s wasiyat in your head, not knowing where they are, or how are they, whether they are even alive? The fascists who are actually celebrating right now – do you have no shame? Do you understand what Freedom even means? Is this why your people fought for Freedom in 1947? Why are you doing this? What do you want to show the world? That you are the most racist people in this world?

One Kashmiri woman student reportedly has been pushed to the brink of suicide, from deep depression and anxiety for her family stuck there. She hasn’t slept for 60 hours. If anything bad happens to her, it will be upon all those who today are not speaking one word about Kashmir and Kashmiris. There are troops everywhere. [In addition to the already stationed more than half a million troops, according to some reports around 30,000 more troops have been deployed in Kashmir over the past one week] Kashmiris are staring at an impending genocide…

Being a Kashmiri today feels like being a Jew in Nazi Germany. They have repealed Article 370 under pressure from big capital, which has invested so much money in them. Today India has alienated itself from the people of Kashmir more than ever. Today Indians are truly ‘the Other’ for us. It is really paining me to say this, because I have friends here!

My appeal to my fellow Indians is to wake up, Fascism is knocking at your doors. Today they are coming for Kashmiris, tomorrow they will come after someone else! Wake up and Stand for Kashmir today! Because if some of us survive after all, we will come to fight alongside you when they come after you tomorrow! Stand up and fight for a Secular India! We want a Secular India, and we want Article 370 back.

Those of my Indian friends who are here today, please do something to stop the ethnic cleansing of Kashmiris and our culture! Please help us get connected with our parents, please help us talk to them!” 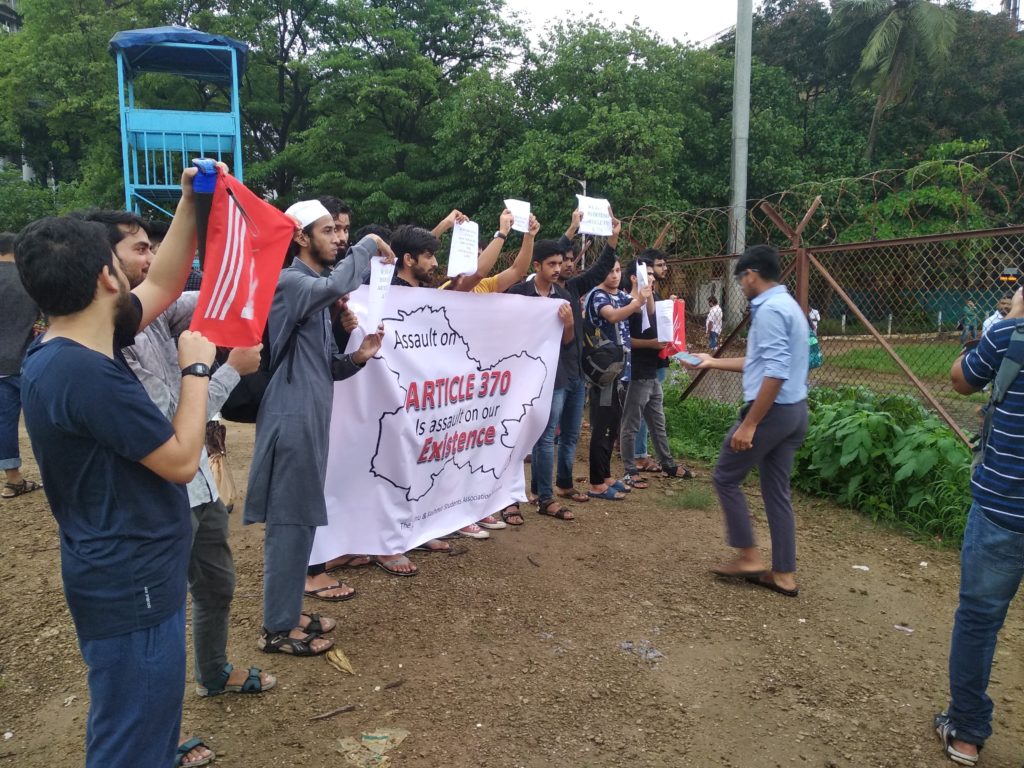 On Thursday, GroundXero briefly spoke over the phone to one of the spokespersons of the Jammu and Kashmir Students’ Association Mumbai chapter. Here is what he said:

GX: What is the situation there in Kashmir now?

J: We don’t have confirmations about the situation yet, but some of my friends and cousins had contacted through some helplines activated by the Government. We got to know there were stone pelting in some areas like from Kupwara district (Trehgam, Kralpora), people are being caged into their houses, every street is being occupied by forces.

We were also told that low rank Kashmiri policemen are being sent back to their homes and their weapons are being seized as Government has fears that may be they will use their guns against Indian forces. Some people even there [Kashmir] don’t know what is happening outside, and some even don’t know yet that article 370 and 35A have been scrapped.
One of my friends told that he has a patient at home, she needs medical checkups every two days. Who will let her get to doctor in the curfew?

GX: Are the helplines working?

J: Some are, few aren’t. Every time I called it came busy. I still haven’t been able to speak to my parents. Anyway if you get through on the helpline, it takes you to some telephone operator who says “everything is normal” and hangs up!

GX: At least are you safe and comfortable here in Mumbai?

J: I have lived in Mumbai for the last 3 and a half years, I love Mumbai! I love the people here, they are very supportive. But after this decision by the BJP I am not able to go out, I am in fear that I will be killed. Every Kashmiri studying outside of Kashmir is living in fear. The Government is not even releasing a single statement on our behalf, to ensure us that they are with us. We feel Kashmir for such people is only Kashmiri land. We have no contact with our families. We don’t know what is happening with them, are they alive? We are getting anxious, we are having sleepless nights. Why is the Government not allowing us to connect with our families?

GX: Today when you look at ‘Indian Democracy’ from Kashmir, what does it look like? Should Indians be worried about their ‘Democracy’?

J: No democracy. They have murdered democracy. India is no more a democratic country. It is unconstitutional and undemocratic. They didn’t involve Kashmiris in the decision. We are being betrayed in the name of so called development. If you compare Kashmir with other states, we are better in education, tourism, financial strength and in many aspects of life. But they murdered Kashmiris psychologically and I think this decision, in the long term will have many many dangerous consequences. This is how every Kashmiri is psychologically going through now…

We are ready to die, but we will never accept this decision. They are only interested in land. And after the article is removed, Kashmir will lose everything. Kashmir is going to become another Palestine. The BJP and the RSS are going to try to implement their ideology there. Muslims are going to be killed. It has already started. But we will shed every drop of blood to save Kashmir. 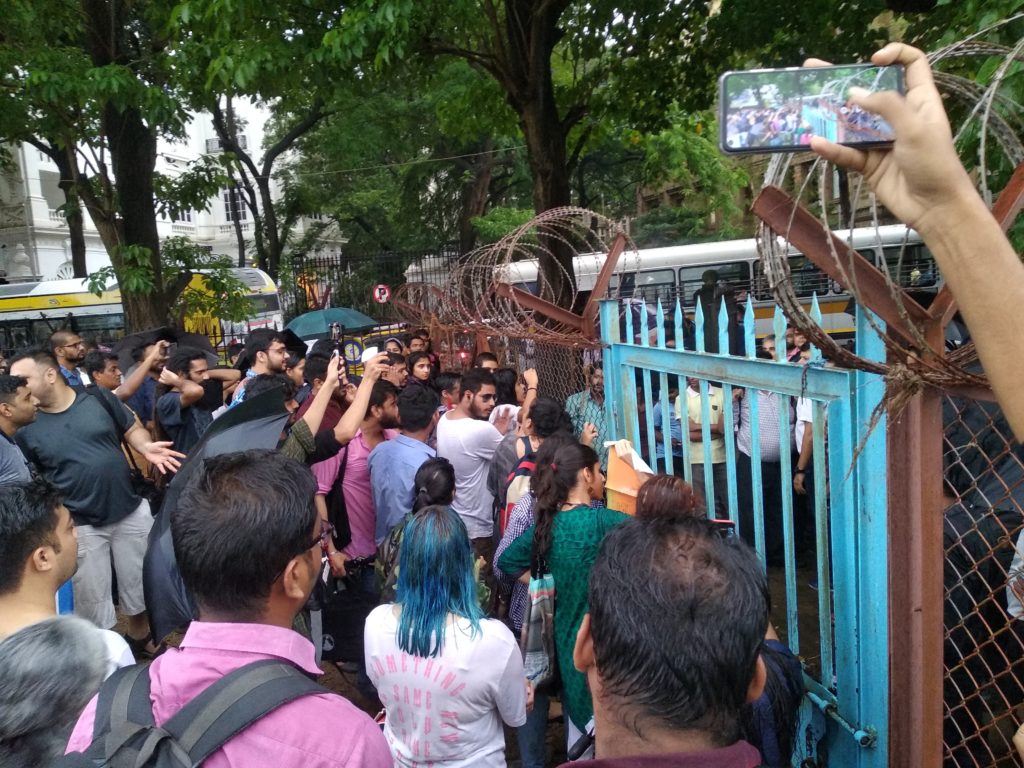 Verbal skirmish, and at times engaging arguments and discussions between the protestors and regular working people passing by. Azad Maidan, Mumbai. Photo: GX.

The Wire reported earlier today from Srinagar, that at least 21 young men and boys were brought in to Srinagar’s main hospital for treatment for pellet injuries in the first three days after the scrapping of Article 370.

Challenging the Presidential Order issued on August 5 under Article 370 of the Constitution, Shakir Shabir, a lawyer from Kashmir, has filed a writ petition in the Supreme Court.

“Well that didn’t take long. Al Jazeera reported moments ago that the curfew was lifted to allow Kashmiris to attend Friday prayers & that after prayers thousands of Kashmiris in Srinagar protested in the streets even though Indian troops fired at them with rubber bullets & tear gas. These are some of the women protesters who we can see were brought to their knees by India’s barbarous actions,” reported Al Jazeera.

The 16-year-old was hit by pellets in the head. Two others were also injured. They suffered injuring to back and groin.

Later in the day, they reported “Ban on public gatherings lifted in Jammu, schools to reopen: The magistrate for Jammu district in Indian-administered Kashmir said all schools in the Hindu-majority area “may resume their functioning” from Saturday onwards. The statement by Sushma Chauhan also lifted a ban on gatherings of more than four people in the district.” 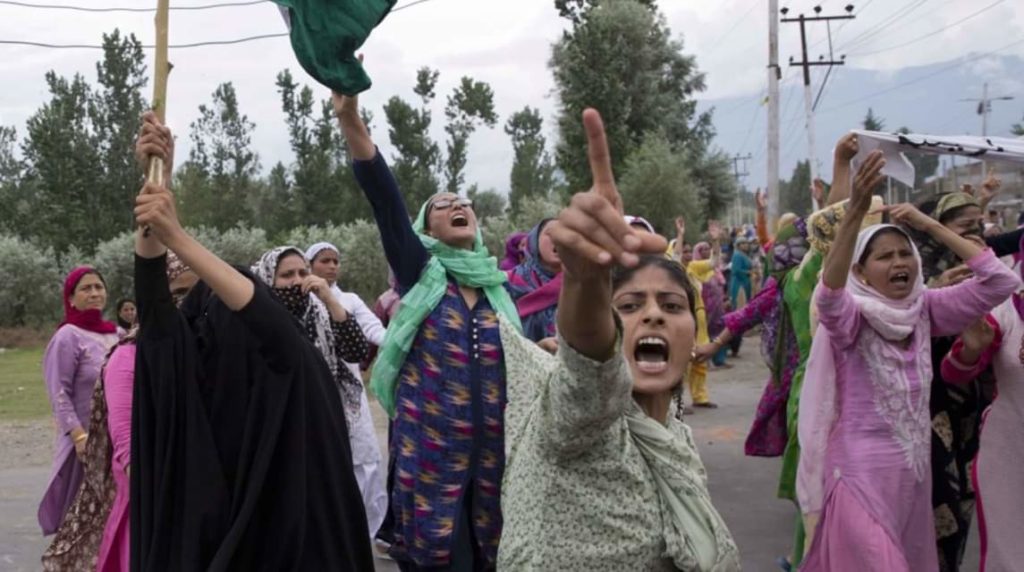 Courtesy: Al Jazeera. Friday. After the namaaz when curfew was reportedly relaxed for a while.