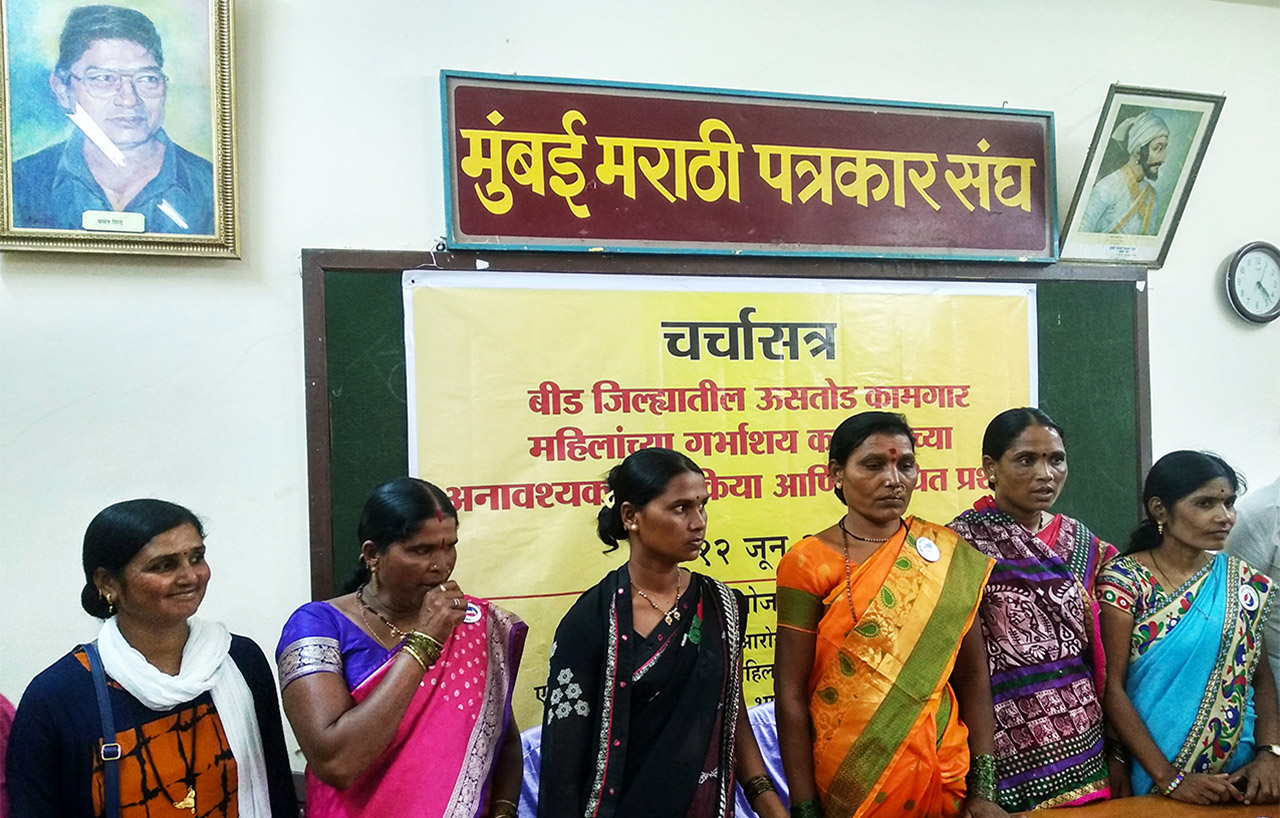 Large numbers of families from the Marathwada region (South-eastern parts of the state, which includes Beed district) of Maharashtra, migrate for work to the sugar belt in the western parts of the state, to work as sugarcane cutters. According to reports, the women among these workers have been systematically induced by private hospitals in the region to undergo unnecessary hysterectomies. This is done in order to extract maximum working hours from the women who, post-surgery, stop having their menstrual cycles. A GroundXero report.

“After the surgery, I was not able to work. But I had to. There was no other option left. Within a month of the surgery, I had to join work. Since then I am facing many health issues like severe back pain, pain in the hips, chronic spasms in my arms and legs,” said Chhaya Dhoke – a cane-cutting woman worker from a Beed sugar plantation, at a press meet held on 12th June in Mumbai on the issue.

Another woman named Asha Shinde underwent a hysterectomy at the age of 22, after the doctor told her that her uterus had moved down due to lifting heavy weights. Few years after the hysterectomy she had to undergo another surgery costing Rs. 1 lakh, as she was suffering from severe back pain due to the hysterectomy. These workers often have to sell their property and take big loans to pay for the surgeries and their after effects.

Hysterectomy is a surgery to remove the uterus. This surgery is used to treat women’s health conditions like uterine fibroid, endometriosis, pelvic support problems, abnormal uterine bleeding, chronic pelvic pain or gynecologic cancer. In ‘total hysterectomy’, entire uterus including the cervix is removed. In case of sugarcane cutter women, most of them undergo hysterectomy before the age of 25 – much before their menopause. When ovaries are removed before menopause, women typically experience immediate menopause signs and symptoms, and also run increased risk of osteoporosis which then requires therapy.

These women hail from drought prone areas of Beed district. Lack of water leads to women facing unhygienic conditions during periods which often result in vaginal infections. The rate of malnourishment is also quite high among these women, and so is child marriage. Experiences of most of the women in this area shows that if the girl gets married at an age of around 13, she would typically give birth to three children till she turns 18, and then undergo hysterectomy by the age of 25. These women have to walk long distances in search of water, in addition to the extremely labour intensive work of cutting the canes. All of this leads to intense pressure on the lower abdomen. The conditions at these workplaces are so poor that these women do not even have access to toilets. The contract between contractors and sugarcane cutting workers does not give them the permission to take even a day off.

According to the Maharashtra Government report that hasn’t been made online yet, 4500 hysterectomies were conducted in Beed district in the last three years. The rate of hysterectomy in Beed district was found to be 36 percent (in other words, 36 out of every 100 women undergo hysterectomy at some point), which is very high as compared to the statewide rate of 2.6 percent, and the national rate of 3.2 percent.

These women avoid going to government hospitals where they may have to spend the whole day because of poor facilities, and thus face a fine imposed by the contractor. Doctors from private hospitals take advantage of this situation. “At the age of 19, while working on the field, I was suffering from abdominal pains. I went to the doctor, who gave me some medicines. I observed that my pain increased after taking those medicines and afterwards the doctor told me I have a tumour that may turn cancerous, and advised me to undergo surgery (hysterectomy). I went through the surgery for which I had to spend around Rs 50,000. We had to sell our bullocks for that,” said 30 years old Chhaya Suresh Dhoke, one of the cane-cutters from the severely drought-affected Beed district, at the press meet. According to figures provided by the Beed administration, 11 hospitals conducted most of these surgeries in the district, and 85 percent of the surgeries since 2018 were conducted by private hospitals. One of the hospitals, which did not even have a gynecologist, conducted as many as 24 hysterectomies in a year.

As the treatment at private hospitals is very costly, male members of the family sometimes pressurize these women to ask for money from their maternal homes, or they took loans from the local Saukar (moneylender) or from some microfinance group.

As per the census, Beed district’s rural population is around 21 lakh people, most of whom are dependent on agriculture for livelihood. As per data provided by the agriculture department, the number of marginal farmers (less than one hectare of land) in the district is around 4.33 lakh, that of small farmers (less than two hectare of land) is almost 2 lakh, and around 1 lakh semi-medium farmers (2 to 4 hectares land). There is no official data on landless farm labourers, but it is estimated as more than 5 lakhs. Due to regular droughts, farming has become difficult in this region and the rates of farmer suicides is on the rise with each passing year. These landholders, as well as landless labourers who account for 30 to 40 percent of the rural population, are thus forced to migrate to other districts and states during October-April each year to work in the sugar cane farms and factories. These sugarcane cutting workers are from Scheduled Castes, Nomadic Tribes and Other Backward Castes. Other than the inter-district migration, workers from the Marathwada region largely migrate to Karnataka, while those from Khandesh (Nandurbar and Dhule districts) migrate to Gujarat and also to Andhra Pradesh. 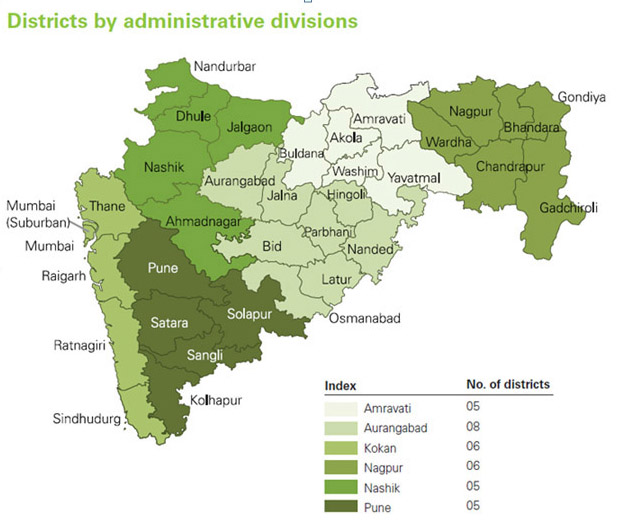 Due to unemployment and drought the families have to migrate, as discussed above. When children and old members of the family stay behind at the village, the girls are tasked with taking care of the rest of the family members. In some cases parents take the girl children with them to avoid sexual violence they have to face if left behind at the village. In both cases girls get no chance to access education. These girls typically get married during the age of 13 to 15, after which they again have to get back to working in sugar factories or farms due to unemployment and illiteracy. “If the government ensures implementation of the Rojgar Hami Kayada (MNREGA) and Anna Suraksha Kayda (Food Security Act), focuses on the education of these girls, then there is a possibility that this vicious cycle will break,” said Lata Bhise from the Bharatiya Mahila Federation.

There are 173 co-operative sugar factories in Maharashtra – 16 in Vidarbha, 63 in Marathwada,  and 88 in western Maharashtra. The chairmen of these cooperative factories are mainly leaders from various political parties. Narsingrao Patil, ex-MLA from Congress and then NCP, was one of the founding members of the Daulat Cooperative Sugar Mill in Kolhapur. Sadashivrao Mandlik from NCP, ex-MLAs from Congress – Madan Vishwasnath Patil from Sangali, Madan Prataprao Bhosale from Satara, independent ex-MLA Balasaheb Pandurang Patil from North Karad, ex-Minister from Congress Shalinitai Patil, and others like Harshwardhan Patil, Babanrao Shinde, Dhanajorao Sathe, Ashok Shankarrao Kale, Madhukar Pichad, Gopinath Munde, Devidas Pingale, Raosaheb Danve, Prakashrao Solanke, Rahul Mote, ex-MLA Dinkarrao Mane – these are some of the other Directors of sugar mill cooperatives in the state. Most of them are Maratha leaders affiliated to the Congress and NCP.

The private factories largely came up after the liberalisation of the economy in the ‘90s. There are 23 private sugar factories in Maharashtra today out of which three are owned by political leaders: Subhash Deshmukh, Baban Pachpute and Nitin Gadkari.

In April 2019, the National Commission for Women issued a notice to the Chief Secretary of Maharashtra about women getting their wombs removed to avoid absenteeism and fines due to menstruation.

On 16th April, the collector of Beed Astik Kumar Pandey issued a circular, asking private doctors in the district to take permission for carrying out such surgeries from a civil surgeon or the Taluka Health Officer. The circular also states that in case of emergency hysterectomies by private doctors, they should be notified within 24 hours of the procedure, and a monthly report of these surgeries should be sent to the health authorities. In other typical cases, private hospitals are directed to send the women to the Taluka Medical Superintendent, or District Civil surgeon with all necessary documents and the civil surgeon and the medical superintendent should then direct the concerned hospital about the urgency of the hysterectomy. Also according to the circular the hospital should inform the civil surgeon and the medical superintendent about the date on which the surgery would be conducted.

After sustained pressure from the affected women and civil society and women’s organisations, on 19 June 2019, the Maharashtra government set up a committee to probe into the high number of hysterectomies performed in Beed district over the last three years. The committee will be headed by the Principal Secretary of Health department.

12th June Press Meet on the issue, by non-profit organisations

This issue was raised in a press conference organised by various groups such as Mahila Kisan Adhikar Manch, Akal Mahila Sanghatan, Jan Arogya Abhiyan, Bharatiya Mahila Federation in Mumbai on 12th June 2019. These organizations raised demands for a Clinical Establishment Act regulating private hospitals, for a ‘Board of sugarcane-cutters’ to be formed under the Social Security Act 2008, for the implementation of Sexual harassment at the workplace laws and the Minimum Wages Act. They argued that sugar factories should take the onus of safety and providing basic facilities at the workplace, that women who have undergone unwarranted hysterectomies should be given compensation by the respective private hospitals where the surgeries were done and all the surveys conducted by the Government on this issue should be made public. They also demanded that the Maharashtra Medical Council must conduct a detailed inquiry into the 11 private hospitals, and the specific doctors who have performed these hysterectomies, and take punitive actions against them including canceling of licenses.

A group of sugar cane cutting worker women also met the Shiv Sena MLAs Manisha Kayande and Neelam Gorhe on the same day, asking them to raise the issue in the Monsoon session of Maharashtra Assembly.