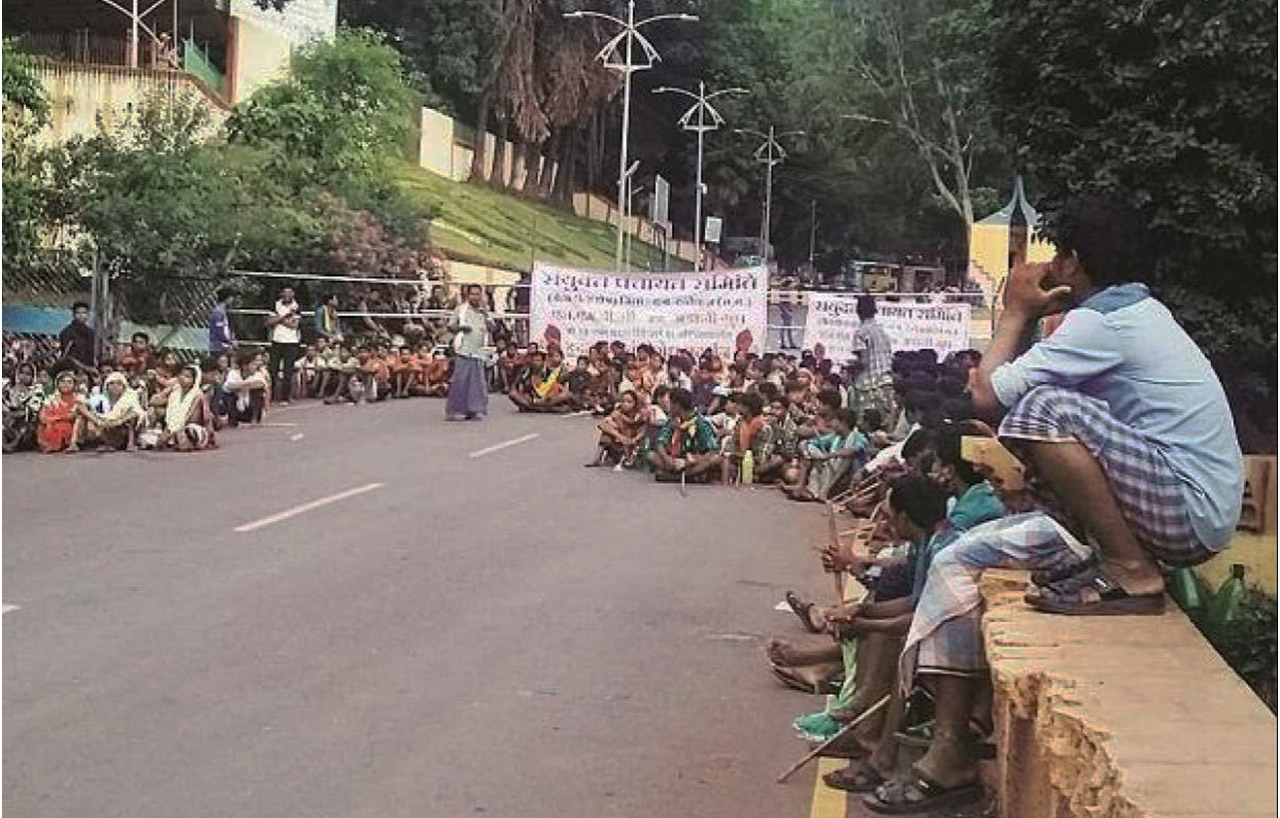 Social movements to protect the Indian forests have so far focussed more on the implementation of FRA than anything else; significant mobilisations keep on emerging in many parts of the country as people try to assert control over forests. The new struggles view implementation of FRA more as a long-drawn people’s struggle for control of forests rather than a statist process, which means that the state hegemony is under real attack. Over the last two decades, strong tribal and peasant movements against mining and forced industrialization have erupted in forest and coastal areas of Odisha. In Niyamgiri, the Dongria Kondh(a typical forest community), mobilized successfully against a proposed bauxite mining project by the infamous Vedanta group, which would have otherwise destroyed their forest landscape. As in Niyamgiri, the farmers of Jagatsinghpur successfully invoked the FRA in their long struggle against forced land acquisition by the state to set up a huge plant by the Korean steel giant Posco. In Mahan in Madhya Pradesh, the forest communities organised under the banner of Mahan Sagharsh Samiti(MSS) succeeded into stopping a coal mining project jointly owned by Esaar and Hindalco, which threatened to destroy and 500000 trees across 1200 acres of old Sal forests, besides displacing 54 forest-dependent villages and their 500000 residents. Forest communities including the indigenous Madia Gonds in the Gadchiroli district of Maharashtra have long been in opposition to the string of proposed iron mines, which would directly destroy approximately 15000 hectares of dense forests and will affect another 16000 hectares. In the neighbouring Korchi area, gritty resistance from the communities forced the premature withdrawal of an iron mining project. In the Sarguja and Raigarh districts of Chhattisgarh, the communities have mobilised against coal mining. In other areas of Chhattisgarh, Madhya Pradesh, Maharashtra, Jharkhand and West Bengal, communities and their movements have assumed control of their forest spaces, stalling and sometimes stopping logging operations by forest department.

In the Pathalgadi (erection of stones) movement that took the tribal heartland of India by storm in 2017-18, tribal gram sabhas(village assemblies) in large areas of Jharkhand, Chhattisgarh, Odisha, Madhya Pradesh and Telengana, erected stones to mark their territories and proclaim full autonomy in all matters of governance, in accordance with the provisions of the Indian Constitution and legislations such as Panchayats Extention to Scheduled Areas (PESA) and the FRA. It is not a coincidence that Pathalgadi is happening in an area where most of India’s coal reserves are located; Pathalgadi in Jharkhand is evidently triggered by the state government’s decision to start a ‘land bank’ spread over thousands of acres of non-cultivable land, to give away to the companies for ‘development purposes’, mainly mining.

Though popular resistance is using state laws such as the FRA and PESA to stop deforestation and elaborate legal provisions are in place to ensure community control of forests, these facts do not seem to deter the Indian state from going ahead with organised deforestation. According to official statistics for forest ‘diversion’ compiled by the Ministry of Environment, Forests and Climate Change, a total of 1.5 Million hectares of forests were diverted in the time period 1980-2019—more than half a million for mining, the rest for thermal power, transmission lines, dams and other projects. In the last three years (2015-18) alone, the Indian Government has given ‘forest clearances’ for denudation of more than 20000 hectares of forests. Under the FRA the process of forest diversion now mandatorily includes community consent, such forest clearances are now routinely issued on the basis of consents obtained largely by coercion and fraud. If consents cannot be manufactured, the concerned administrative authorities resort to more elaborate practices—for instance, in the coal mining area of Sarguja, Chhattisgarh state government ‘took back’ entitlements for community forest resources it had issued earlier, claiming that the villagers caused disturbances to mining operations in the area and that the approval for mining preceded the entitlements. In February 2019, the Indian government has granted stage-1 preliminary forest clearance to an opencast coal mine by the Adani group in one of the largest contiguous stretches of very dense Hasdeo Arand forest that spans 170,000 hectares, earlier categorized as a ‘no-go’ area for mining by the environment ministry.

The government counts such rampant ‘diversions’ of forests among the ‘organised’ and ‘managed’ drivers of deforestation, and apparently does not list emissions caused by those in its Green House Gas emissions inventory. It does, however, collects huge sums of money from the commercial users of forestlands according to its controversial Compensatory Afforestation (CA) protocol, as costs for raising new plantations and value of ecosystem services. After the enactment of Compensatory Afforestation Act 2016 (CAF Act), the accumulated CA funds (better known as CAMPA funds) would now reach the state forest departments with greater ease, and as the movements apprehend, would be increasingly used to undermine community control. While completely ignoring the widespread opposition to the law and in abject violation of the FRA, the Indian state sought to institutionalise and legitimise the process of putting the country’s forests on sale.

Growing resistance against extractive and commercial practices in forests have expectedly invited increased state repression, more so in areas such as Gadchiroli where Maoist guerrillas are present. In 2018 April, specially trained commandos killed 40 alleged Maoists in the area, in what was termed by various human rights groups as a “fake encounter”.  Soon afterwards, Mahesh Raut, prominent forest rights activist and former Prime Minister Rural Development Fellow, who had been working with villagers in the region for the last six years, was arrested on false charges of sedition. After his arrest, 300 gram sabhas from Etapalli and Bhamragad tehsils (administrative centers) of Gadchiroli have passed a resolution in his support. In Jharkhand, the state government has unleashed a reign of terror in Pathlgadi areas, carrying out mass arrests and branding the movement anti-national. The leaders of the ruling BJP in both Jharkhand and Chhattisgarh have called the movement anti-Hindu as well.

Despite the FRA and its empowering provisions, people’s access to forests have consistently been curtailed and criminalised: state keeps on harassing and persecuting communities and movements trying to implement the FRA on their own, and criminal cases are lodged against not only the community activists and gram sabha members asserting their rights and powers under the FRA but also the marginalised people not aware of the law. The National Crime Record Bureau reports (2014, 2015) on environmental crime in India reveal that 77% of the total 5846 cases recorded in 2014 are related to violation of Indian Forest Act 1927 and Wildlife Protection Act. Most of the cases were against tribals. Not a single case was registered against polluters in critical polluted areas in the country. This sequence of events embodies a never-ending cycle of state repressions, the latest instances of which are the much-discussed eviction order by the Indian Supreme Court and proposed amendments to the Indian Forest Act. On 13 February 2019, the Supreme Court, while hearing a long-pending petition against the FRA (the contention was that more forest rights meant increased deforestation and the rights holders were largely ‘encroachers’ in state forests) filed by certain conservation NGOs and retired forest officers, ordered that in all cases of ‘final rejection’ of forest rights claims under the FRA, the claimants have to be summarily evicted. If carried out, this order would mean eviction of about ten million forest dwellers. After vociferous protests from all sections of the society, the eviction has been temporarily put on hold. Immediately afterwards, the Indian government came up with the draft of an amended Indian Forest Act, which in effect junks the FRA, and makes it easier for forest officers to privatise forests and deny forest rights, ostensibly in the interest of climate change mitigation, ‘production’ forestry and conservation. The draft amendments also give forest officers a lot more policing powers along with unprecedented levels of legal impunity.

Forest Commons in opposition to state/capital: emergence of a new ‘left’ practice?

Sporadically and sparsely distributed over a huge geographical territory, locked in endless battles with state and capital, do social movements in Indian forests show signs of effectively going beyond the local? What is more important still, do they discover themselves in non-state spaces, as oppositional or insurrectional entities?

Unfortunately, almost all movement alliances in contemporary India are entirely top-down processes, representational as well as hierarchic. Statism is intrinsic to these formations, and it is doubtful whether they perceive how their statist positions betray the politics of autonomy and of the commons that the movements profess. Given the present situation, it might be premature to expect that an oppositional and anti-state left politics of commons will emerge and take control. However, after a long period of gestation in which movements and their alliances were born and withered away, a new politics seems to be emerging at last.

Most—if not all—of the movements discussed above interpreted and used state laws to occupy forest spaces hitherto understood as strictly state territory, part of its eminent domain. In a way, the movements asserted people’s sovereignty over forests in pronounced opposition to state control, first by deliberately moving away from statist interpretations of laws such as the FRA and PESA, and secondly, by posing the legally recognised institution of gram sabha as the supreme authority in forest and tribal areas. Much of the new resistance is spontaneous and local, not really related to the larger alliances as well as big influential NGOs outside; Pathalgadi provides the best instance of such a resistance. By defending as well as creating non-state and anti-capitalist struggle spaces, the new movements in Indian forests mark an evident and visible rupture in the status quo; whether this rupture would deepen and coalesce in a different and more equitable social order remains to be seen.

So far as long-term political consolidation is concerned, much remains tentative, uncertain, and unstable. Something definite can be stated though: along with their counterparts in many other parts of the world, the ongoing struggles against mining, land-grab and deforestation in Indian forests pose a strong, visible and philosophically distinct response to climate change. By not letting open-cast mines come up in forests and other common lands, these movements effectively and directly stop not only future emission events, but also, by not allowing forest and other commons landscapes to be over by state and capital, they challenge the warped and false rationality of capitalism. The struggles might not identify themselves as ‘climate’ or ‘climate justice’, nonetheless the very real reality of these struggle refuses to be overwhelmed and subjugated by state/capital narratives.

The author Soumitra Ghosh is a social and environmental activist.