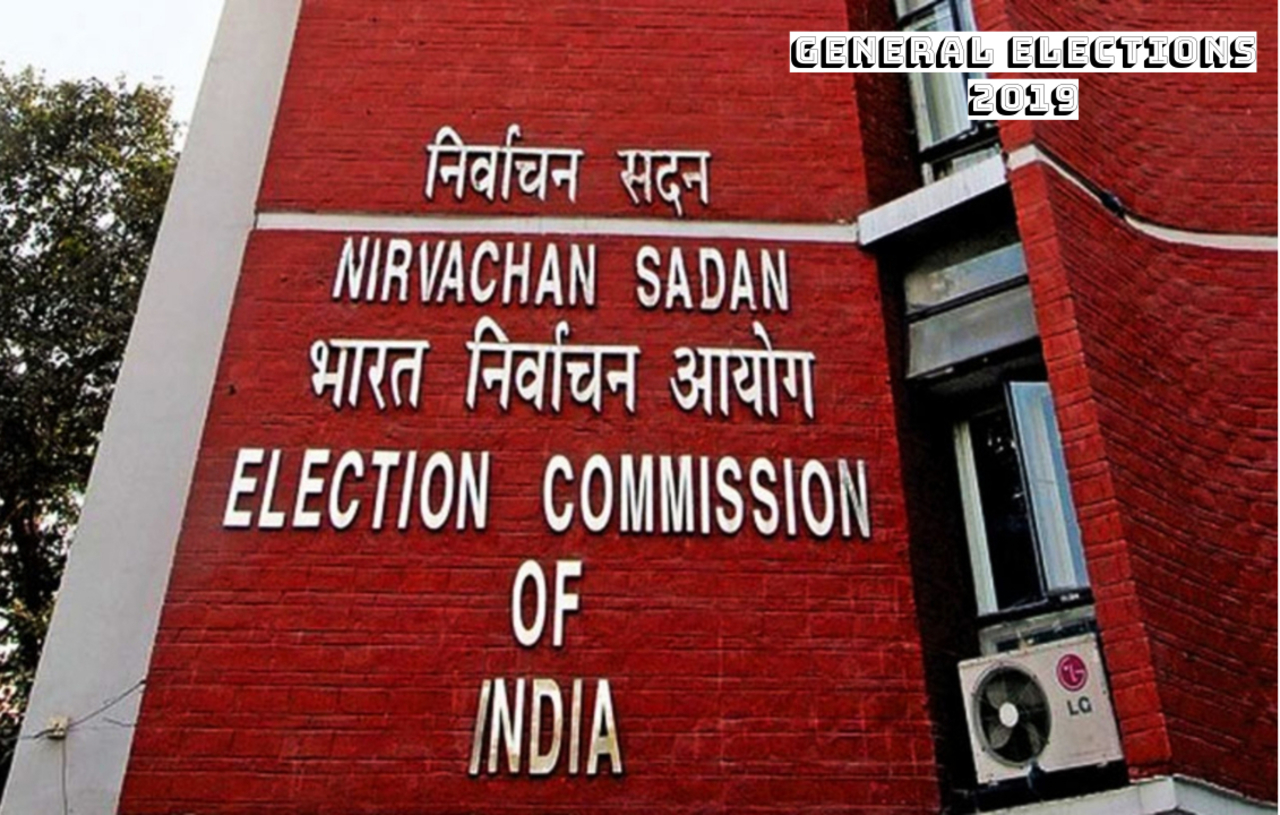 As many as 2650 people from across the country have reportedly signed and sent email complaints to the Election Commission of India over the recent communal, divisive and anti-Constitutional remarks made by the ruling party and its ministers. A GroundXero report.

On 16th April, a group of civil society organisations put up an online petition, asking the ECI to take action on the blatant violation of Election Code of Conduct by the ruling party in the last phase of its campaign. Separate complaints were filed in each of the following six cases of violation:

1. BJP issued a statement on its official twitter account promising implementation of the NRC and removing “every single infiltrator except Buddha (Buddhists), Hindus and Sikhs”, to create a “New INDIA”.

2. BJP head Amit Shah promised in his Assam and Bengal rallies “to remove every single infiltrator from this country” and to identify and grant Indian citizenship to Hindus and Buddhists. 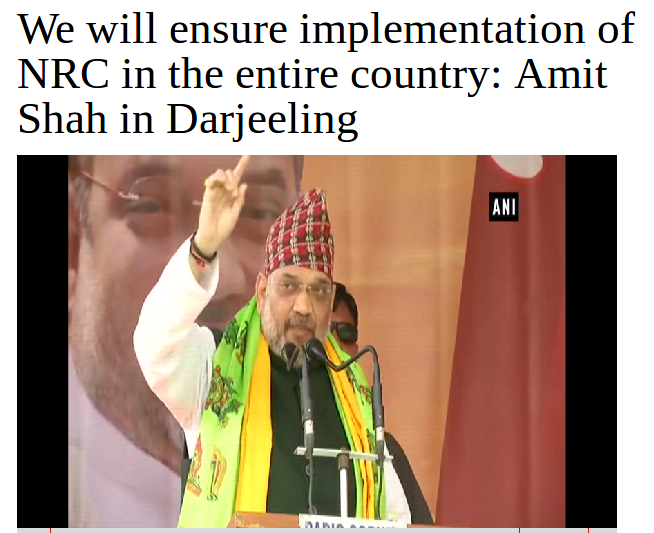 3. Sitting Prime Minister Narendra Modi also promised implementation of the Citizenship (Amendment) Bill and to ensure that no “infiltrator’s name” is in the National Register of Citizens, while also talking of the Partition and protecting Hindus in his speech. 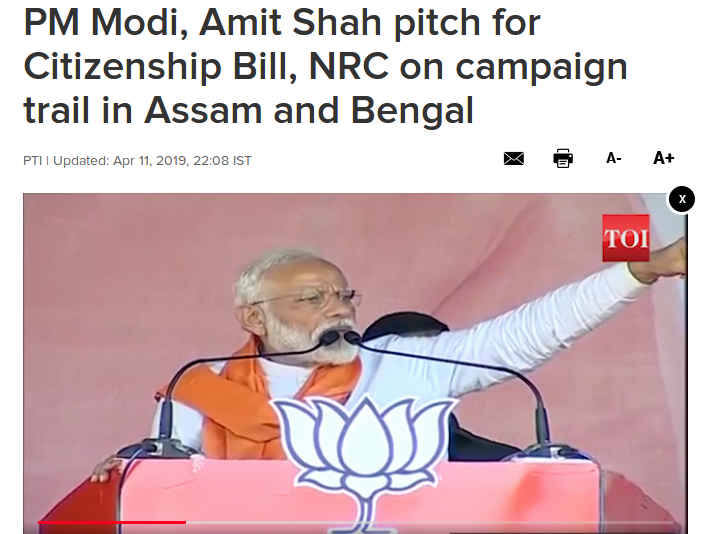 4. Sitting Women and Child Minister Maneka Gandhi, even while holding office, declared that she would discriminate against Muslims because they would not vote for her. 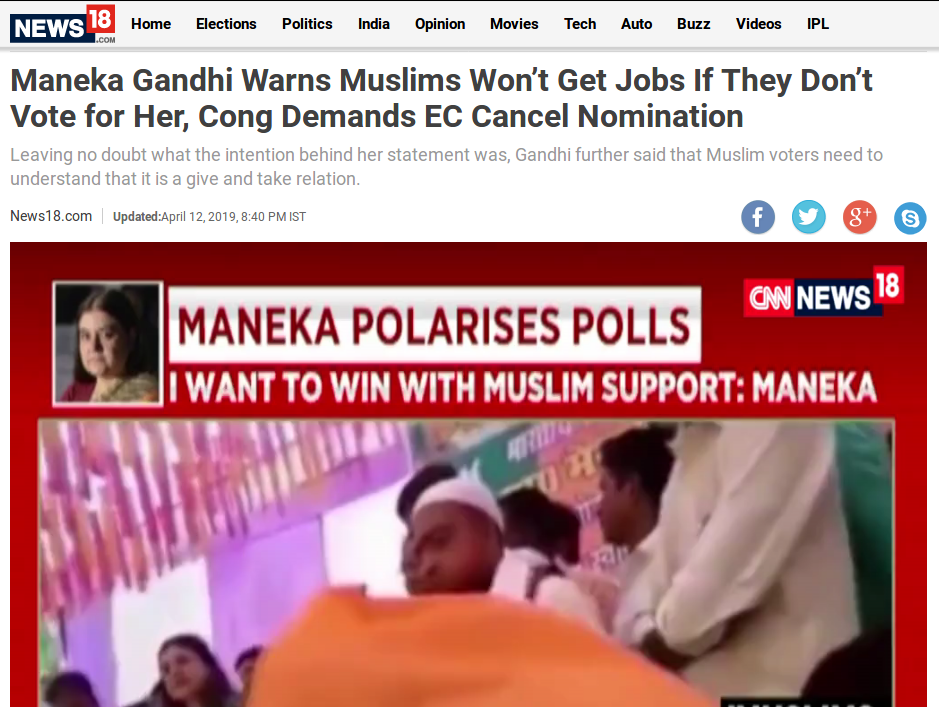 5. BJP candidate and sitting MP from Unnao, Sakshi Maharaj, threatened to put a curse on those who won’t vote for him. 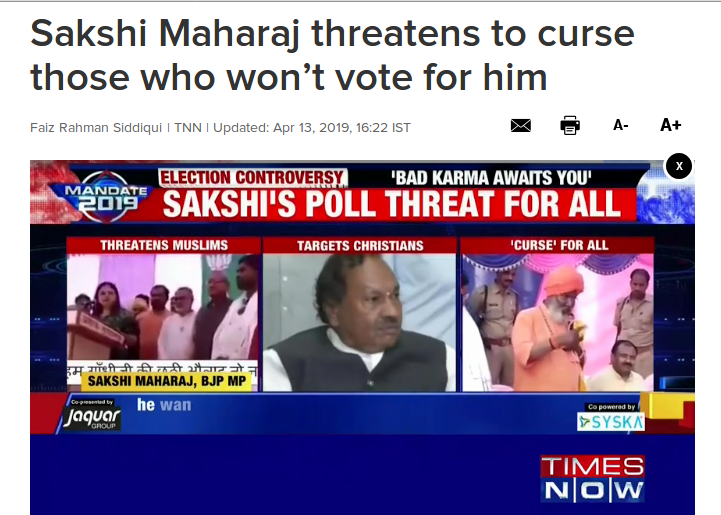 6. BJP candidate and Leader of Opposition in the Karnataka Legislative Council, K.S. Eshwarappa defended the denial of tickets to Muslims and Christians by the BJP, stating that they have not been given tickets because they are not loyal to the nation.

According to one of the complainants, the EC has registered the complaint and has confirmed over email and phone message that the same is under investigation.

“The statements openly made by BJP and its ministers during the election campaigning and while the Model Code of Conduct is in force, have been captured on video, are part of official footage / social media posts and circulated on national television and social media. The statements are clearly discriminatory, unconstitutional and divisive. They constitute hate incitement and mongering, they promote fundamentalism, othering, alienation and denial of citizenship on the basis of religion,” wrote Adv Lara Jesani of the People’s Union for Civil Liberties, one of the organisations that supported the petition, in a media release.

BJP’s regional leaders have also taken their cues from the national ones, and ramped up the hate-mongering. Assam BJP leader Himanta Biswa Sharma reportedly said that Muslims’ right to vote will be taken away if his party comes to power. 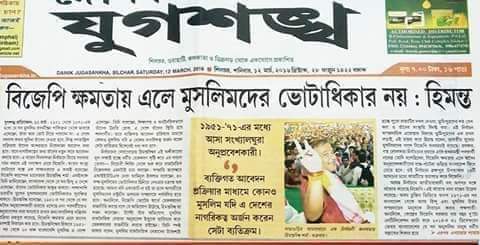 These statements have been claimed to be violating provisions 1, 3 and 4 under General Conduct (Chapter I) of the Model Code of Conduct. Provision 1 of the Code says, “No party or candidate shall include in any activity which may aggravate existing differences or create mutual hatred or cause tension between different castes and communities, religious or linguistic.” Provision 3 says, “There shall be no appeal to caste or communal feelings for securing votes.” And Provision 4 says, “All parties and candidates shall avoid scrupulously all activities which are “corrupt practices” and offences under the election law, such as bribing of voters, intimidation of voters,…”.

The offences are serious in nature and have the effect of subverting the principles of free and fair elections, which the EC is duty-bound to uphold under Article 324 of the Indian Constitution. “The statements coming from ministers currently holding office also constitute an abuse of their power and position as office bearers and disrespect for the values enshrined in the Indian Constitution,” said PUCL. Over and above violating the Code of Conduct, the statements made by BJP leaders, including the Prime Minister, have been claimed to constitute the offence of Corrupt Practices and Electoral Offences as defined in sec. 123 of the Representation of People’s Act, 1961.

BJP’s election manifesto – which the party officially calls “Sankalp Patra” – has been accused of being in violation of the Guidelines on Election Manifestos (chapter VIII) of the Model Code of Conduct, because of the several communal, discriminatory and anti-constitutional promises contained in it. Despite repeated warnings from the Election Commission, BJP ministers have regularly exploited images of the Indian Army in their campaign posters, while using the Pulwama incident in their appeals for votes..The BJP’s attempts at whipping up a nationalistic frenzy by referring to the Armed Forces in order to sway public opinion in their favour is one of the most alarming and new features of this election. Last week, in an unprecedented move, eight former service chiefs and 148 other military veterans wrote to the President, expressing outrage over what they termed as using the armed forces for political purposes.

The party has also been found indulging in surrogate advertising violating the Model Code of Conduct, through Web Series, TV shows and in a brazenly desperate move, through openly sidestepping registration procedures in launching a brand new channel called ‘Namo TV’, solely dedicated to relaying the PM’s speeches and interviews. It has not even been made clear whether Namo TV is a ‘news channel’ or an ‘entertainment channel’. Earlier, the Media Certification and Monitoring Committee (MCMC), set up by the Election Commission, issued a show-cause notice to music company T-Series – producers of the Modi biopic starred by CobraPost-stung actor Vivek Oberoi. The Committee described the movie posters as ‘a surrogate advertisement with political overtures’. Subsequently, the EC stalled the release of the film which was supposed to release on 11th April.

PUCL has demanded that the EC must issue show-cause notice to the BJP for violating provisions of the Model Code of Conduct. They are also asking for prosecution of the ministers responsible for unconstitutional and hateful statements – including PM Modi, Party President Amit Shah, Ms. Maneka Gandhi, Sakshi Maharaj, and K.S. Eshwarappa. The other demands include directing media outlets against disseminating communally divisive content. “A strong statement be issued to assure the minority communities who have been discriminated upon and labelled ‘infiltrators’ that their rights stand protected and represented, and affirmative measures be taken to restore their faith in the free and fair voting process,” said Adv Jesani.

GroundXero urges its readers to remain vigilant of attempts at sabotaging the elections by various political forces. Here is what you can do to bring violations in the Code of Conduct by any political party or campaigner to the notice of the Election Commission:

1. Download ECI’s official app called cVIGIL on your smartphone, and use it to file complaints. The App has provisions for anonymous complaints.