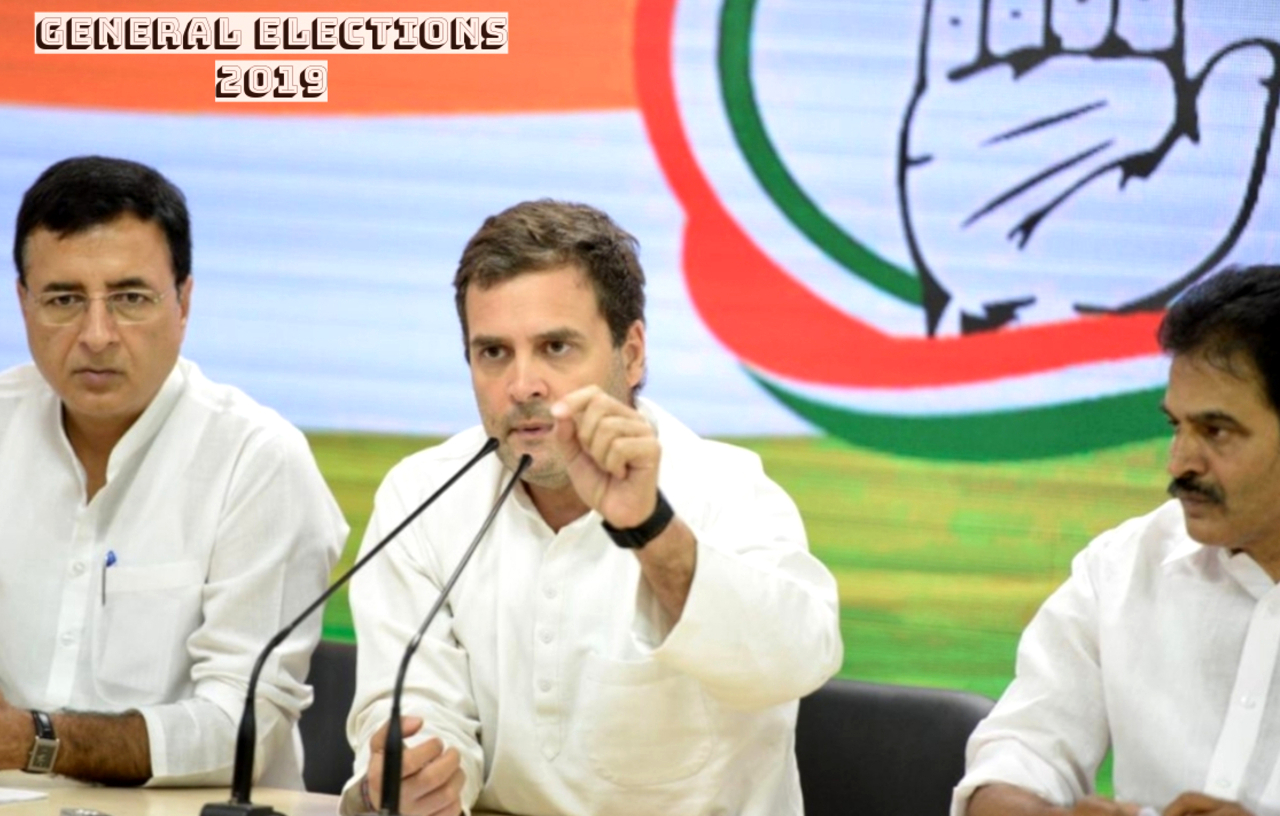 While minimum income guarantees might temporarily cushion against the harsh realities of poverty, they do not address the root cause of these inequalities, i.e. the question of who controls the means of production, writes Narayan George.

(Everything has been said before;

but since nobody listens we have to keep going back and beginning all over again.)

Last week, the Indian National Congress (INC) party announced its intention to implement the ‘Nyuntam Aay Yojana’ (NYAY) scheme, should it be voted into power in the upcoming Lok Sabha elections. Under the scheme, each household would be guaranteed a minimum income of Rs. 12,000 per month. Courtesy of The Wire, we learn that

“… the logic of the new plan is as follows:

The plan has been described by INC President Rahul Gandhi as a “surgical strike on poverty,” and has enjoyed a more-or-less warm reception in the mainstream press. Economists seem to be in agreement that the scheme is at the very least “laudable in terms of shifting public attention back to the urgency of policies to deal with those in extreme poverty.” Ex-Governor of the Reserve Bank of India Raghuram Rajan has called the scheme “doable” and worth thinking about “provided we make it more than just a handout.” Unfortunately, most of the criticism of NYAY seems to be either just plain silly—for example, NITI Aayog’s vice-chairman Rajiv Kumar said it would “create strong incentives against work”—or solely focused on its exorbitant cost and how to keep the fiscal deficit in check while implementing it. In this article we’d like to collect some structural criticisms of minimum income guarantee schemes like NYAY, and focus in particular on why the program is unlikely to achieve its stated goal of “ending poverty” once and for all.

While the INC has clarified (albeit somewhat ambiguously) that the promised minimum income will not replace subsidies, it is difficult not to conclude that, should it be put into action, we will soon find ourselves on a slippery slope. Once a minimum income is guaranteed and provided by the state, is it really so difficult to imagine the ruling classes declaring all extant subsidies “wasteful” in an attempt to push for the privatization of public services (like healthcare and transportation) that the public can now “afford”?

The Indian state, ever since its turn towards globalization in the 90s, has undertaken a systematic assault on labour of both the organized and unorganized kinds. This grand tradition is being continued by the Modi government—recall for example their extension of fixed term (i.e. contract) employment to all sectors in order to improve “ease of doing business.” Indeed, this offensive has been launched on several fronts, and there is now an ever-widening chasm between working class organizations’ demands and the state’s policies. To cite just one example, the National Rural Employment Guarantee Scheme (NREGA) Sangharsh Morcha has demanded that the wage rate per day be raised to Rs. 600 in line with the Minimum Wages Act, and to more accurately reflect the levels of consumption in rural households. In fact, in most states the NREGA wages have fallen below state-mandated minimum wages! And how does the government respond? This year the NREGA wage hikes are around 2.16%, i.e. a lousy raise of between Rs. 1–17 per day.

It isn’t just that working class populations aren’t paid a decent living wage. A lack of access to low-cost, quality healthcare and an education are also key factors driving families into poverty. To these factors we must also add that in recent years a significant source of distress is the ongoing agrarian crisis about which the state has been criminally negligent, and the issues of shortage and precarity of employment. As a policy proposal, NYAY is blind to all these origins of immiseration, and it is difficult to pretend that the NYAY scheme is of any use at all in curing these underlying pathologies that plague the relations between labour and capital.

In his pamphlet Agrarian Justice, Thomas Paine in 1797 propounded the idea of a universal “basic income,” an issue that has seen a resurgence of popularity across the globe in the last few years. It was his view that the government must

“… create a national fund, out of which there shall be paid to every person, when arrived at the age of twenty-one years, the sum of fifteen pounds sterling, as a compensation in part, for the loss of his or her natural inheritance, by the introduction of the system of landed property.”

The “natural inheritance” that Paine writes about refers to the riches of the Earth which, by virtue of our birth, each of us has an equal right to. The basic income was, then, a gambit offered up in exchange for the tacit acceptance of the legitimacy of private property. It remains very much the same today: a scheme (rather, compromise) offered up by the state in return for our continued acceptance of this legitimacy. This has always been the case. Policies like this are an attempt to hide the true nature of capital and the state, and are couched in the rhetoric of charity, generosity, and compassion.

The paths to destitution are paved by class antagonisms. A minimum income guarantee does not countenance class antagonisms, and neither does it resolve any of the manifold contradictions of neoliberal capitalism—it merely papers over them by pretending that the problem with the poor is they don’t have money and not that they don’t have control of the means of production.

In his book Marx, Capital, and the Madness of Economic Reason (2017), the eminent geographer David Harvey briefly discusses basic income guarantee proposals. He says while it might seem like a solution to poverty—just give people money!—there is a lot going on under the carpet:

“… we know from the analysis of the circulation of capital that a great deal of appropriation of value through predation occurs at the point of realisation. Increasing the minimum wage or creating a basic income will amount to naught if hedge funds buy up foreclosed houses and pharmaceutical patents and raise prices (in some cases astronomically) to line their own pockets out of the increased effective demand exercised by the population. Increasing college tuitions, usurious interest rates on credit cards, all sorts of hidden charges on telephone bills and medical insurance could steal away all the benefits.”

In the above paragraph, Harvey outlines just some of the problems of solely distribution-ended schemes, and it is easy to imagine how his criticisms can be adapted to the Indian context; for example, raising land rents in response to the new minimum income will “steal away” all its purported benefits.

Harvey is, of course, not the first to criticize distribution-ended solutions. In his Critique of the Gotha Programme, Marx makes reference to a “vulgar socialism” that treats distribution and production as independent of one another and asks

“After the real relation has long been made clear, why retrogress again?”

Why retrogress indeed? There can be little argument at this stage: public policy that hopes to improve the lot of the lower classes, while at the same time not taking into account class antagonisms (as if they were fictions!) are bound to live a short life. NYAY’s ideological predecessor, the NREGA, are fundamentally top-down solutions in which the destitute are passive recipients. They must be “cared for” because it is the “humane” thing to do, through “charity” and “donations,” perhaps (slightly differently in the case of NREGA) through cementing the right to work. Contrary to this narrative of passivity, the exploited masses have time and again shown remarkable solidarity and clear thinking despite brutal repression.

Schemes like NYAY seek fundamentally to frame the conversation in terms of problems of the neoliberal state. Problems are, of course, ultimately solvable. Solutions may be suggested, debates may be had, pilot programmes may be tested out, etc. To understand poverty as a problem within the neoliberal state is to accept the latter as an adequate framework within which it is even meaningful to look for a solution.

To view poverty as signalling a contradiction, however, is very different—for contradictions signal larger, more profound inconsistencies of the neoliberal state that would bring it crashing down upon itself. The choice of name—whether poverty is a problem or it signals a contradiction—is important.

NYAY, like NREGA, may well provide some concrete material relief to the lower classes. This relief will, unfortunately, and for the reasons we have outlined, be short-lived. If we are to make a meaningful attempt at eradicating poverty, we must begin by calling things by their proper names.