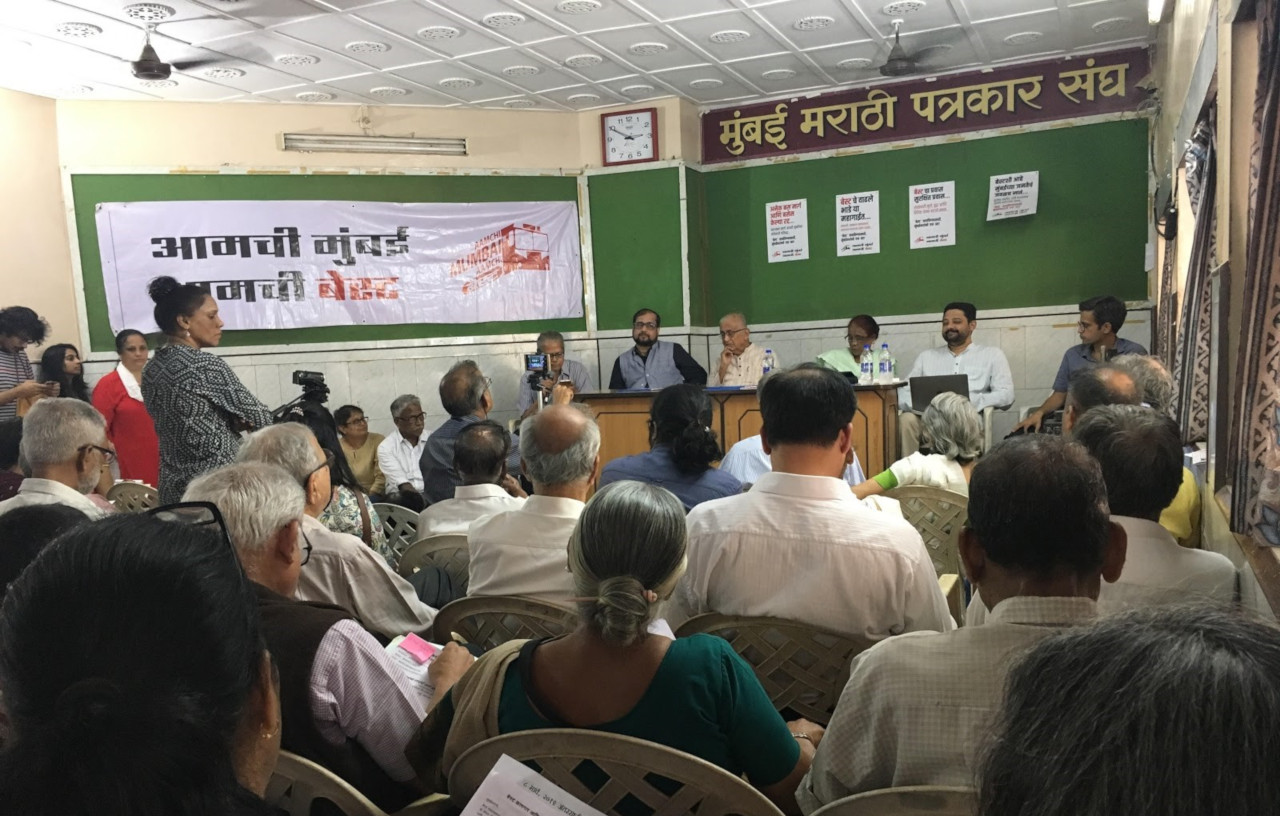 Who Owns The City? A Hearing on Public Transportation in Mumbai

A public hearing regarding the ongoing struggle against privatization of the public bus system in Mumbai was recently held. A committee headed by retired Justice of the Bombay High Court Hosbet Suresh solicited testimonies from citizens concerned with the municipal authority’s proposed course of action, which involves contracting out operations to private enterprises. In this article we review some of the points raised during the hearing, and couch these disaffections within the broader effort to secure for its residents their right to the city. A GroundXero report.

The citizen’s forum Aamchi Mumbai Aamchi BEST (AMAB) held a public hearing on the ongoing BEST crisis at the Mumbai Marathi Patrakar Sangh on the 1st of March. The meeting was well-attended and the format consisted of a sequence of depositions by residents of the city and representatives of organizations, all frequent users of the iconic BEST buses.

In his address to the gathering before the depositions began, AMAB Convener Vidhyadhar Date highlighted that while the Mumbai Metropolitan Regional Development Authority (MMRDA) and the Brihanmumbai Municipal Corporation (BMC) have aggressively funded the construction of new metro lines and flyovers — transportation “options” that are either inaccessible or unaffordable options for a large numbers among the working classes that reside in the city — at the same time they point to the financial crisis and inefficiency plaguing BEST as a reason to hand over its operations to private contractors. BMC Commissioner Ajoy Mehta proposes to reduce the number of operational buses and bus routes, introduce steep hikes in bus fares, and increase the price of student passes. All this is being done, in typical neoliberal style, to make the BEST more “efficient.”

The depositions from over thirty citizens brought to the fore a number of difficulties faced by working class populations. Many of these complaints — the poorly planned bus routes, lack of effective feeder routes connecting the bus and suburban train networks, the poor condition of bus stops, irregular service, etc. — may be chalked up to a crippling lack of funding. While reports indicate that the BMC is a cash-rich organization, it has denied BEST funding and insisted that it implement a laundry list of “reforms” before it could be considered eligible for funding.

That BEST services haven’t kept up with the rapid proliferation and development of suburbs is also easily seen to be a consequence of lack of funding. In sharp contrast, the upcoming Coastal Road project, for example, is intended solely for private vehicles and is being paid for by the public, yet only an absurdly small fraction of the public will eventually benefit from its construction — “Is there a more egregious example of the poor subsidising the lifestyle of the rich?” asked a transport activist during her deposition.

Another point raised by many who testified before the panel was the relative space-efficiency of public transport. As Scroll reported, “buses occupy only 6% of the total road space in Mumbai, but move about 45% of its users. On the other hand, private vehicles, including two- and four-wheelers, take up 87% of the road space to move the same number of people.” The fact that public transport is being deliberately crippled by the state in order to service the desires of an affluent minority is in actual terms unconscionable and, perhaps more seriously, financially and environmentally unsustainable. It is also a public health concern: a number of citizens also brought up health-related concerns, as prioritizing private over public transport has a well-documented deleterious effect on air quality, which in turn causes acute respiratory problems.

It is perhaps helpful to recall the words of sociologist Erik Olin Wright, who spoke of imagining public transportation not “as a ‘subsidy’ in the sense of a transfer of resources to an inefficient service in order for it to survive,” but “as the optimal allocation of our resources to create the transportation environment in which people can make sensible individual choices between public and private means of transformation that reflect the true costs of these alternatives.”

In particular, improving public transportation has the effect of creating “efficient labor markets since it is easier for poor people to get to jobs. This is a benefit to employers for it makes it easier to hire people and it is a benefit to the people without cars who now find it easier to get jobs. But it is also a benefit to the society at large because it contributes to a long-term reduction in poverty.” Once again, a number of people testifying spoke of how crucial public buses were in order for them to get to their place of study or employment, and of how important it was for them that the fares stay low. College students underscored with admirable clarity that restricting access to public transport effectively amounts to restricting access to education, as many college-goers use public transport to reach their schools and universities. They contrasted these fares with those of the more recent metro lines, which many said were simply unaffordable for a large majority of the population.

A common theme threading through each of the testimonies was the defiant assertion that each of the attendees too had a right to the city: a right to common spaces, easily accessible modes of transportation, and a fair say in the process of urbanization. The noted anthropologist and  geographer David Harvey goes further, writing that “The right to the city is far more than the individual liberty to access urban resources: it is a right to change ourselves by changing the city. It is, moreover, a common rather than an individual right since this transformation inevitably depends upon the exercise of a collective power to reshape the processes of urbanization.” This sentiment underscored nearly all the testimonies provided to the panel.

We now return to the reforms that, as Commissioner Mehta claims, will make BEST more efficient. An insightful analysis carried out by the Research Unit in Political Economy concluded that the proposed contracting out of bus services is not only financially unsound, but actually harmful in the long run. The claimed savings, they concluded, could only be achieved from wage cuts or a reduction in expenditure on maintenance, which in turn would reduce the “safety, reliability, and quality of service.” An especially useful section of this analysis considers the effect that privatization has had on the parts of the bus services in other metropolises; it concludes that while “Bangalore’s performance alone was better till 2014-15, … [it] has since sharply deteriorated. Pune shows that multiple problems can arise with contracting out.” Analyses such as these are valuable as they demonstrate quite effectively that the proposed reforms will not achieve their stated goals.

In concluding, we find that it is helpful to couch any narrative of the struggle to keep BEST a publicly funded organization as part of the continuous and burgeoning movement to assert the citizen’s natural and inalienable right to the city. As Harvey notes, a “focus on the right to the city as both a working slogan and a political ideal,” is helpful because “it focuses on who it is that commands the inner connection that has prevailed from time immemorial between urbanization and surplus production and use.” If the downtrodden are to take back control of public spaces, of the direction and priorities of urbanization, it is imperative that they defend this right with vim and vigor.