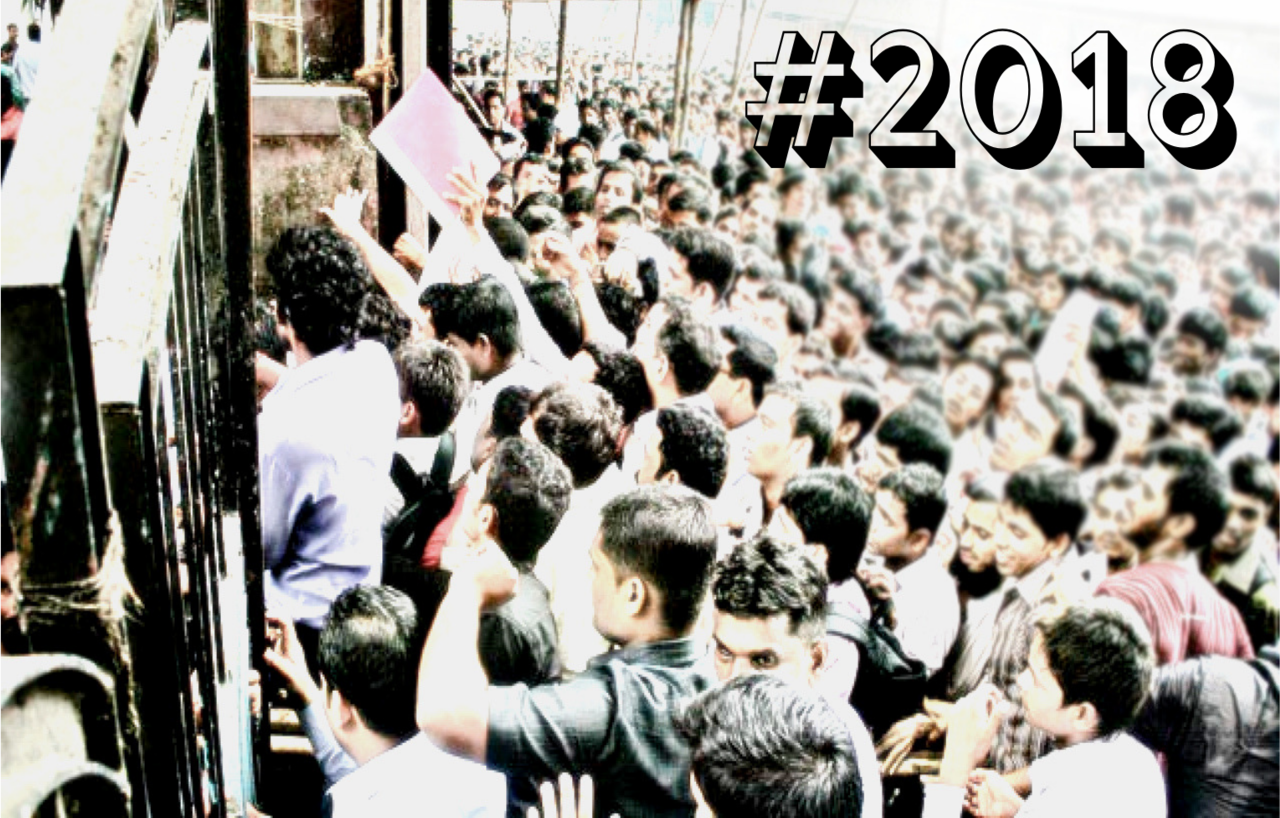 #2018: The Year of Rising Joblessness

Narendra Modi in the run-up to the 2014 General Elections, had promised to generate “One crore jobs every year”. Nearly five years down the line, this has proved to be a Jumla (false promise). The tragedy of unemployment or joblessness continues unabated, complemented by a government that has no solution except to fiddle with data. 2018 was the year which saw rising joblessness, and rising lies about it. A Groundxero report.

The term ‘Achhe Din’ (Good Days) may mean many things to many people. But to the vast majority of Indians, it ought to mean two simple things: jobs and rising incomes. But the reality during the last four and half years tells us something different. The tragedy of unemployment or joblessness continues unabated, complemented by a government that has no solution except to fiddle with data. While India boasts of the “highest economic growth rate”, surpassing even China, millions are still without jobs and the growth has only led to concentration of wealth in the hands of the top 5% causing huge income inequality in the country. Narendra Modi in the run-up to the 2014 General Elections, had promised he would generate “One crore jobs every year”. Nearly five years down the line, this too has proved to be a Jumla (false promise). If, towards the fag end of its five-year tenure, the electorate in three Hindi-speaking states largely voted against Narendra Modi’s party, one has to presume that there is some lack of delivery on the jobs and incomes front. BJP lost seats in both urban and rural areas in these states.

The year 2018, which ended just a few days back was no exception as regard to creation of jobs: unemployment had steadily risen from over 5 per cent in January 2018 to a chilling 7.3 per cent on December 28, 2018, according to latest survey data from the Centre for Monitoring Indian Economy (CMIE). India is adding 1.2 crore people every year to its working age population and providing low-end jobs to only a few lakh.

On December 15, 2018, All India Manufacturers’ Organisation (AIMO) released a survey report which concluded that 35 lakh jobs were lost in the last 4.5 years of Modi’s rule among traders and MSME (micro, small and medium enterprises) sector. The AIMO survey talks about the TMSME segment, clubbing traders along with the MSME sector, surveying more than 34,000 representatives throughout the country between October 1, 2018 and October 30, 2018.

The survey report says that traders saw the highest job loss at 43 per cent over this period, followed by 35 per cent in the small industry segment, 32 per cent in the micro enterprises segment, and 24 per cent job losses in the medium enterprise segment. “The worst hit sectors where unorganised employment prevails are-Plastic/Matches/Crackers/Dyeing units/Stitching units/Stone units/Tanneries/Job working units/Printing sectors,” said the AIMO release.

The year 2015-16 “saw a growth in all areas of business due to high sentiments and expectations from the new leadership,” says the AIMO, but it “went down next year due to demonetisation and then again due to GST implementation.” The job losses among traders are also partly due to competition from e-commerce retail.

However, the most adversely affected was the self-employed category, which includes tailors, cobblers, barbers, plumbers, masons, electricians, and the like, who are all being eliminated, said the AIMO.

The ‘State of Working India 2018’ Report

‘State of Working India 2018’ report released in September 2018 said that the country has the highest rate of unemployment in 20 years. The report, which was released by the Centre for Sustainable Employment of the Azim Premji University, brought to light some scary realities that plague the job market in India.

Shockingly, 82 per cent of male and 92 per cent of female workers earn less than ₹10,000 a month (₹18,000 per month is the minimum salary recommended by the Seventh Central Pay Commission). “This suggests that a large majority of Indians are not being paid what may be termed a living wage, and it explains the intense hunger for government jobs,” stated the report.

Ranade states that there are various non-economic, social and cultural factors which prevent women from entering the workforce. One big factor is maternity. Many women who join the workforce are unable to rejoin after having a child. The legislation of 2016, which entitles a woman to 26 weeks of paid maternity leave, should have helped women rejoin. But a study by TeamLease estimates that this increased cost for companies and may have discouraged them from hiring women. The estimated loss of female jobs was between 1.1 to 1.8 million for the fiscal year 2017-18, over and above the usual job loss due to attrition related to maternity.

Narendra Modi and his ministerial colleagues have handled the jobs crisis – by deception, sleights of hand and number fudging. On various occasions, different employment generation figures have been quoted – sometimes 70 lakhs, sometimes 40 lakhs, and so on. They have used Employees’ Provident Fund Organisation’s enrollment data to repeatedly show that jobs are being created; whereas, it only shows number of people brought under the provident fund cover. These may or may not be new workers. But Modi and co. told us that these are the new jobs.

One of the ministers stated in the Parliament that 17.6 lakh jobs were created under the Pradhan Mantri Employment Generation Programme (PMEGP). This was projected by assuming that for each project for which bank subsidy was sanctioned, 12 new jobs on an average, were created. This assumption has no basis – in fact the only survey of such enterprises revealed that average employment in such units was just seven. But PM Modi and his associates kept on conjuring numbers and the pliant media flashed these figures without verifying and going into the details of the facts.

2018 was thus the year which saw rising joblessness, and rising lies about it.