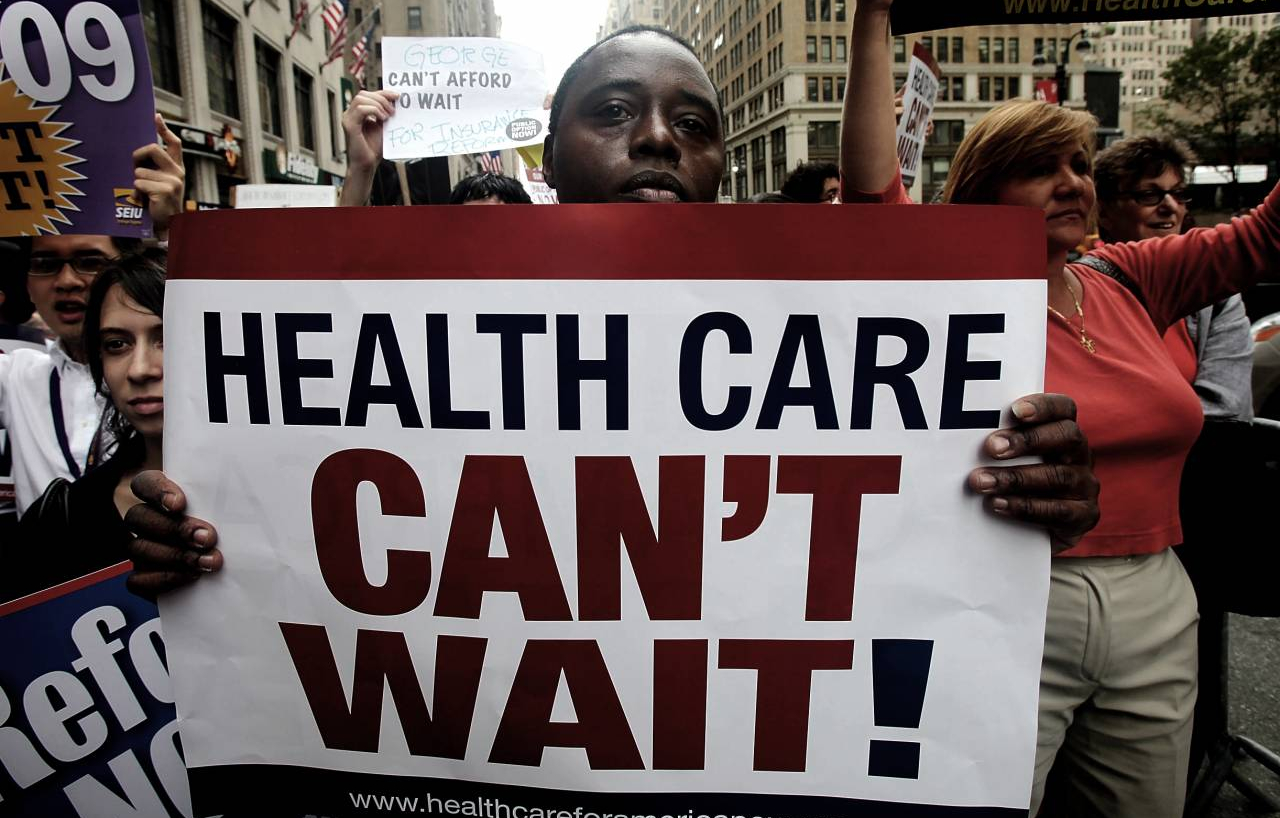 Americans Are Dying For Health Care

The average American dies five years and eight months before the average Japanese citizen, and four years before the average Canadian. Amazingly, Americans live six months less than the average citizen of Cuba, an island nation whose per capita GDP is one-thirtieth that of its northern neighbor. How is this possible? Dennis Redmond argues that the mechanism of ‘free market’ to deliver health care has failed in America.

We all have bodies. Our bodies are frail, mortal, and easily damaged by accidents, bacteria and many other hazards. Since the medical revolution of the late 19th century, we’ve slowly learned to protect and repair our bodies, increasing our global life expectancy from around 32 in the 1850s to 72.0 in 2016. This revolution has gone furthest in the fully industrialized nations, where the average life expectancy has reached 80.4.

Except my country, the United States, where it is only 78.7.

This is strange, because America is a fantastically rich country which spends colossal amounts of money on health care. In 2017, the US spent $3.3 trillion, one-sixth of its entire economy, on all forms of medical expenditure. Given this colossal amount, you would expect Americans to and live longer than anyone else on the planet.

We don’t. Here are the numbers from the World Bank and OECD for the US and seven other high-income nations (China and India are included because they are representative of the life expectancy outcomes of most middle-income and lower-income nations, respectively): 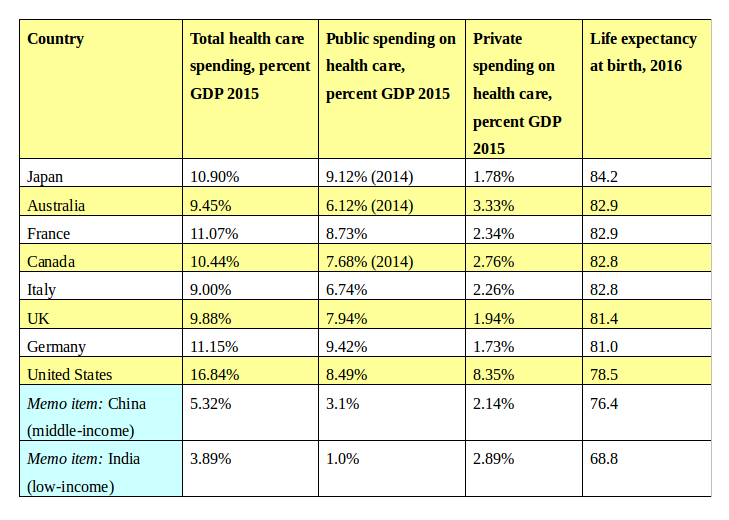 The average American dies five years and eight months before the average Japanese citizen, and four years before the average Canadian. Amazingly, Americans live six months less than the average citizen of Cuba (life expectancy: 79.0 years), an island nation whose per capita GDP is one-thirtieth that of its northern neighbor.

How is this possible? Americans are supposed to be an innovative and technology-savvy people. Why do Americans pay so much and get so little in return? The reason is that the free market is a screaming failure, that’s why. Look more closely at Canada and the US in the chart above (Canada is similar to the US in terms of its culture, demography and economy, so it’s fair to compare the two countries). US levels of per capita public spending on health care are about the same as Canada’s, but its per capita private spending is three times as large. If you subtract the Canadian level of private spending from the comparable American level, you get 5.59% of US GDP, or a total of $1 trillion. Shocking as it sounds, Americans are spending a trillion dollars a year for the privilege of dying four years earlier than their northern neighbors. This failure is easiest to grasp if you compare medical care to one of the most ubiquitous products of digital capitalism, the cellphone. If the free market works to create cellphones, why can’t it deliver medical care?

There are three excellent reasons it cannot. First of all, the whole notion of consumer choice makes no sense when it comes to health care. Consumers choose the type of phone and the features they want, but nobody chooses to get sick. Similarly, when we choose a phone plan, we know how much airtime we’re buying. But when we fall sick, our illness decides how much time we have left on this earth, period.

Second, getting medical treatment is nothing like dialing a phone number. Healing our bodies requires the efforts of skilled doctors and nurses with decades of schooling, life-saving medical equipment requires extensive training and safety regulations, and medicines need testing and approval from government agencies such as the FDA in the United States and the European Medicines Agency in the EU.

Third, the free market fails even in the one place you might think it could succeed, namely health insurance. In the US, the so-called Obamacare legislation which took effect in 2012 mandates that all US citizens must have private health insurance, and provides federal subsidies to some (but not all) citizens who cannot afford to pay.

The US system does not work. Even with Obamacare, millions of Americans are not covered, while millions more overpay for substandard insurance policies and end up with huge medical bills anyway. In 2015, a study by Kaiser Permanente found one quarter of all Americans struggled to pay their medical bills. In the US, private insurers have neither the means nor the motive to bargain for better prices. So their strategy is to charge the highest rates possible to cover excessive drug costs, to limit claims to the absolute minimum, and to deny as many insurance claims as they can. The entire system is designed to maximize profit, rather than save lives.

It’s also worth noting that US pharmaceutical companies routinely charge outrageous prices for drugs via monopolies. An investigation conducted by two US senators in 2016 concluded: “…each of the four [pharmaceutical] companies followed a business model (with some variation) that enabled them to identify and acquire off-patent sole-source drugs over which they could exercise de facto monopoly pricing power, and then impose and protect astronomical price increases.”
By contrast, all other high-income nations treat access to health care as a basic human right rather than a market commodity. That is why their citizens live increasingly longer lives than US citizens. A recent article in the British Medical Journal shows the divergence: 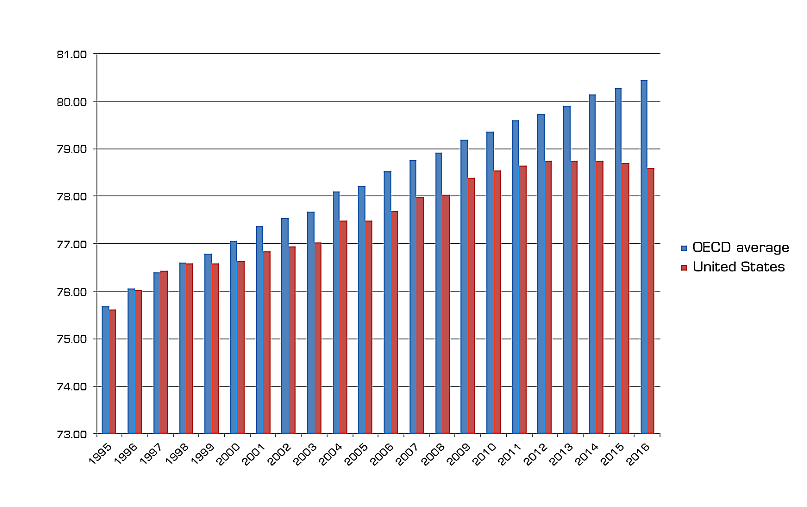 To make a long story short, medical care is where the free market doesn’t just fail. It is where capitalism kills.

It doesn’t have to be this way. Canada has a single-payer system, which means tax money is collected by the federal government and then spent on medical care. Strict public oversight of the system keeps costs under control and prevents drug companies from creating monopolies. Doctors and nurses don’t worry about collecting medical bills, but spend their time delivering top-quality medical care. Patients in Canada simply walk in to the health care provider they wish to see, and never have to deal with a billing agency. Similarly, patients in Britain’s National Health Service choose what doctor and provider they want by means of an electronic referral system. In Germany, patients present their eHealth card to access the health care they need.
The simplest solution for the United States is to expand the existing Medicare program to cover all Americans (currently, Medicare only covers all Americans who are 65 and older). This is the heart of the “Medicare for all” campaign spearheaded by the fine folks at the Democratic Socialists of America, and supported by the leading US healthcare unions, the Service Employees International Union (SEIU) and National Nurses United (NNU).

America is a rich country, so there is plenty of money to pay for this expansion. What is required is the political will to make it happen. 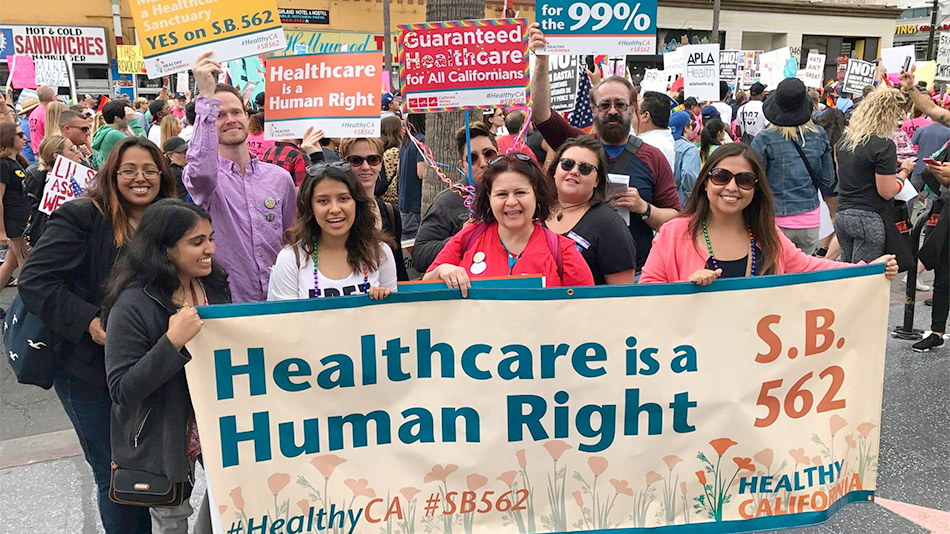 Rally for Medicare for all in Los Angeles, July 23, 2017. Photo courtesy: Healthy California

This is the most interesting part of our story. Since the watershed of the 2011 Occupy movement, a critical mass of labor unions, concerned citizens, digital activists, health care workers, and radicalized young people have begun to invent new forms of mass political participation. The organizing tools of Occupy were crucial to the Black Lives Matter movement, to the protests against toxic water in Flint, to the anti-pipeline protests against the Dakota access pipeline, and to the Bernie Sanders presidential campaign of 2016.

These protest movements scaled up significantly after the 2016 election, everywhere from the four million participants of the Women’s March of March 2017 to the unprecedented mass participation of hundreds of thousands of young Americans in the 2018 March for Our Lives, a protest against gun violence [1].

These movements did more than just constrain the power of the authoritarian kleptocracy to loot the public till. They have fundamentally changed the nature of political contestation in the United States. It’s important to remember that thirteen million Americans work in the health care sector, 9.1% of the entire US workforce [2]. For years, this vast pool of workers has witnessed the awfulness of privatized health care up close and in person. One of Occupy’s most important contributions was to give these workers the political inspiration and the digital tools to fight back.

And fighting back they are. Tens of thousands of health care and education workers are joining unions, while millions of students are marching and voting for change. Most remarkable of all, a Reuters poll conducted in the summer of 2018 showed that seven out of ten Americans supported Medicare for all.

There is no precedent for this level of popular support for public service in post-1945 American history. In the mid-term elections of 2018, this groundswell of dissent turned into concrete political power, when women and young people voted in record numbers and the opposition Democrats took back the House of Representatives. Voters in three US states — Idaho, Nebraska and Utah, all fairly conservative states — approved the expansion of Medicard benefits to 363,000 citizens.

This is the first overt sign of an epochal political transformation, the emergence of the first mass progressive movement in the US since the New Deal of the 1930s and the Great Society of the 1960s. As for what that movement will concretely look like and what struggles it will wage in the future, that is the subject for another article.

[1] Alexandria Ocasio-Cortez, newly-elected representative of New York’s 14th Congressional District, was radicalized by her participation in the protests against the Dakota pipeline: “The tipping point was when I was at Standing Rock in 2016, and I saw how all of the people there — particularly the Native people and the Lakota Sioux — were putting their whole lives and everything that they had on the line for the protection of their community. I saw how a corporation had literally militarized itself against the American people, and I just felt like we were at a point where we couldn’t afford to ignore politics anymore. We couldn’t afford to write off our collective power in self-governance anymore out of cynicism. It was the day that I got off camp that a national organization, Brand New Congress, called me and asked if I’d be willing to run.” Gabriella Piaella. “The 28-Year-Old at the Center of One of This Year’s Most Exciting Primaries”. The Cut, June 2018.

[2] For the sake of comparison, the total number of all education workers in 2017 was 8.7 million, or 6% of the US workforce. Roughly one in six of all US workers are employed in the education and health care sectors.