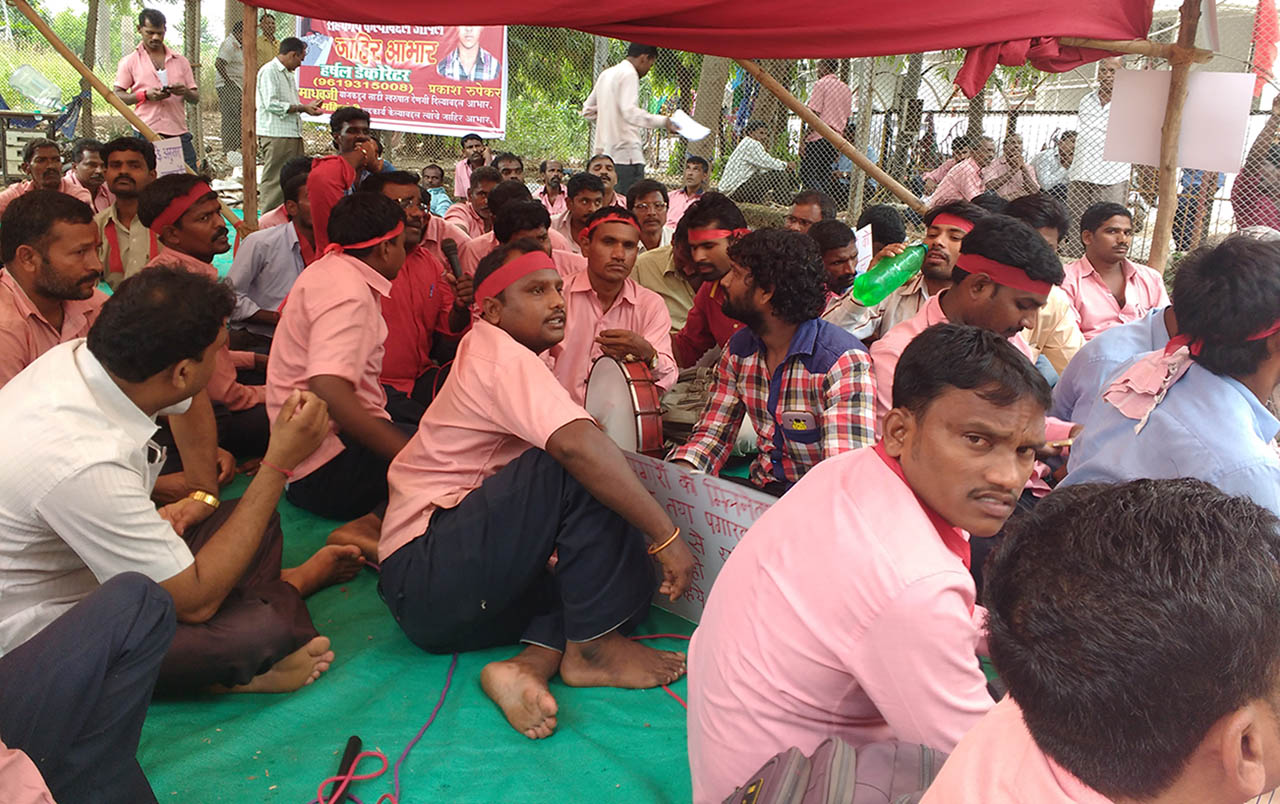 On 12 January, 2018, nearly two weeks after the Bhima Koregoan Elgaar Parishad in Pune, the ATS of Mumbai police arrested five workers belonging to the Reliance Energy, accusing them of having Maoists links. The arrests, under UAPA, hardly attracted any media attention, unlike the later arrests in June and August of lawyers, professors and intellectuals. Nine months on the arrested workers still languishes in jail. Raju Kadam – social and trade union activist working at Bombay Suburban Electric Supply writes for GroundXero on the plight of those arrested workers.

On 12 October 2018, it will be nine months since five workers of Reliance Energy in Mumbai were arrested and charged under UAPA by Anti-Terrorist Squad (ATS) of the Mumbai police. It was on 12 January 2018, that these workers, active members of Reliance Energy’s “Mumbai Electric Employees Union”, were arrested at midnight from their residence by the ATS. The ATS claimed that a Maoist was arrested from Kalyan who during interrogation revealed these workers’ names – Ravi Marampalli, Shankarayya Gunde, Satyanarayan Karrela, Babu Shankar Vanguri and Ramesh Golala.

There were about 15-20 ATS police who raided their homes around mid night. We don’t understand why the ATS needs so many people to go and arrest workers, if not to only instill fear. It is ironic that the ‘Anti-terrorist’ squad itself spreads terror. When the ATS personnel knocked at their doors, the family members of the workers asked, “Who are You?”, “Why have you come?”. The ATS didn’t answer them. They were all dressed in civilian clothes. The mobile phones of all the family members were snatched away and confiscated. Without showing any search warrant they entered the room and ransacked it. Everything in the rooms were thrown here and there. All books, money, ration card, Adhar card, ATM card, voter ID card, bank pass book, PF slip, even school text books of children were seized, stacked in a bag and taken away. This is how they terrorized the families of the workers. The ATS told the family members that the workers will be taken to the police station. “It’s an ordinary matter, after enquiry and they will be released the next day”, they said. They asked the family members to come to Vikroli Old Police Station the next day and take the workers back home.

On the following day, the family members of the workers reached the police station in the morning and waited till 7 pm but still there was no sign of police releasing the workers. The police refused to give any answer to their queries about when they will be released. They were told that they can meet and talk to the arrested workers till Tuesday.

The arrested workers were living in Mumbai for the last 20-25 years. They had come to Mumbai from Andhra in search of jobs. They got employed in Reliance Energy. Soon they realized how the company and the contractors were exploiting and oppressing the workers. They worked as contract labours. Their wage was Rs.60 per day but they were paid only Rs.30 by the contractors. There was no guarantee of regular work. No pay slip. No bonus. When a contract labour died of electric shock during work, the company or the contractor took no responsibility. The family of the deceased labour was not paid any compensation. Soon enough they realized that to fight against such injustices, the labourers need to unite and form a Union. In 2005 they formed the ‘Contract Workers Manch’ and started to take forward their struggle against the company and the contractors. Later the Manch was renamed as ‘ Mumbai Electric Employees union’.

On 12 December 2007, the company management implicated workers belonging to the union on false charges and got them arrested under the Mumbai Essential Services Maintenance Act (MESMA). Shankar Gunde who is now in prison under UAPA was then also charged under MESMA and put behind bars.  All the arrested workers were dismissed by the company from their job.

On 14 December 2007, the Borivali court released them on bail and on 18th April 2009, the court acquitted them of all charges under MESMA. The police could not produce any proof against them. The workers lodged a case against the company in the labour court demanding that they must be reinstated. That case is still going on and the workers though proved innocent in court, are still under dismissal by the company.

The five workers arrested in last January are all active members, organizers and leaders of ‘Mumbai Electric Employees Union’. In fact, they are founder members of the union. For decades they have been fighting for workers’ rights. Their view of trade unionism was not limited to only raising economic demands of the employees. Apart from observing International Workers’ Day on 1st May , International Working Women’s Day on 8th March, they were active in trying to connect the struggle of other oppressed sections in society with the workers’ struggle. They actively participated in movements for the rights of dalits, minorities, students and tribals. From protests against rising prices of essential goods, unemployment to the struggle of Maruti workers, these workers always stood in solidarity.

Every year on 6th December, on the death anniversary of Baba Saheb Ambedkar, the MEEU workers have been visiting the place where he passed away – Chaityabhumi in Dadar, to pay respect. Apart from feudalism, capitalism, imperialism and patriarchy, they have always considered annihilation of the oppressive brahmanical caste system as necessary to establish a just and equitable society.

It was with this class consciousness they participated in this year’s 200th anniversary of Bhima Koregaon ‘Shaurya Diwas’- an event to commemorate the historic win of the lower caste Mahars over the mighty upper caste Peshwas. The workers, along with family members also went to the ‘Elgar Parishad’ held on 31st December 2017 to celebrate the occasion. The ‘Neo-Peshwas’ in BJP who are now in power in Delhi could not digest this rising dalit assertion. So they were the first to be arrested under UAPA within 10-12 days of holding of ‘Elgar Parishad’. 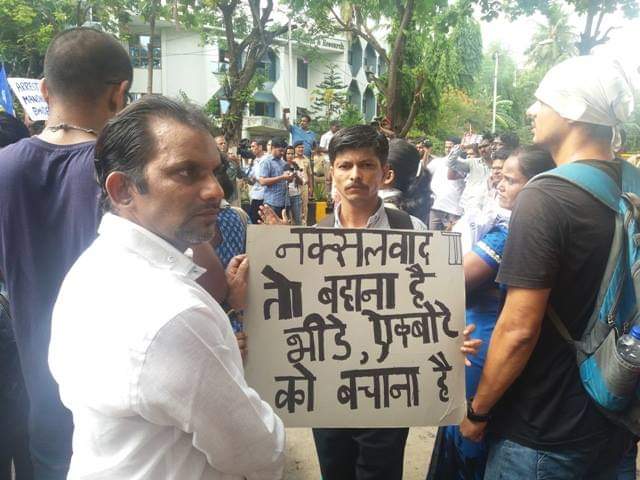 These workers gave a lot of time to the movement – from organizing meetings, distributing pamphlets, sticking posters to raising slogans, they did everything. But today when they are behind bars there is no one to raise slogans for their release.

Prof. Prabhakar Maccha (a school teacher) was also arrested along with the workers. But there is no mention in the FIR, why and when was he released by the ATS. Some people said that the ATS often kept visiting his house for “interrogation” after he was released. On 23 January 2018 morning, Prabhakar committed suicide in his home. The reason behind suicide is still not known. Prabhakar was a writer. He was a sympathizer of the union and was connected with dalit and workers movements. No protest was done for Prabhakar and these workers as compared to the ones after the arrest of Sudha Bhardwaj and other intellectuals or as was done after Dr. Binayak Sen’s arrest. This is so, maybe, because they are just ordinary workers and doesn’t belong to the intellectual class. They are paying the price of not being some big shot intellectual, though they always took an active part in the movement of the oppressed classes. These workers gave a lot of time to the movement – from organizing meetings, distributing pamphlets, sticking posters to raising slogans, they did everything. But today when they are behind bars there is no one to raise slogans for their release. This will send wrong message to the new generation. They will think its better to become an intellectual before participating in peoples’ struggles for changing society. 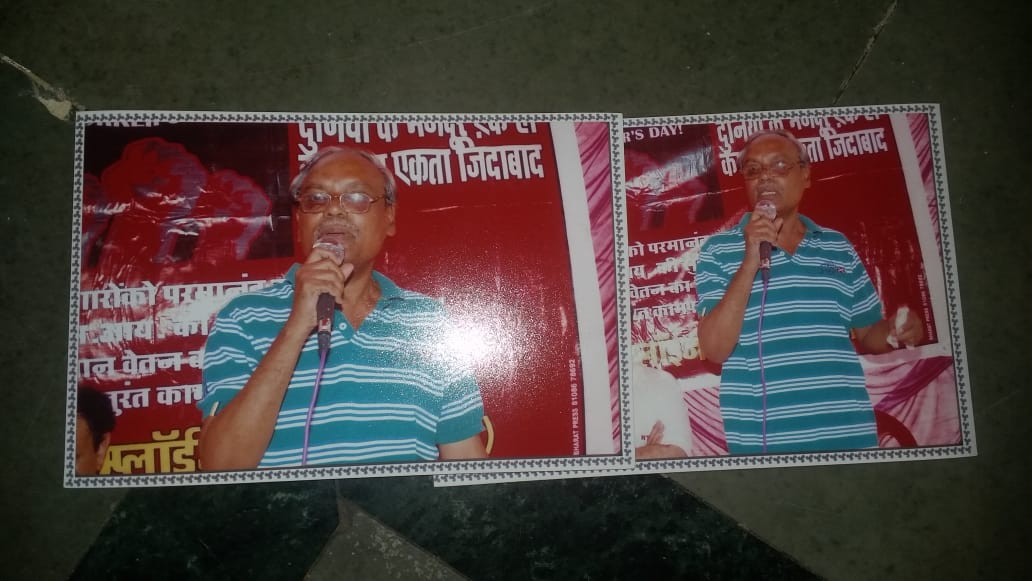 The arrested workers were kept in police custody for two weeks. Satyanarayan Karrella’s mother couldn’t bear the humiliation of the arrest of her son and she died of shock. A few weeks later on 25 January, Saidulu Singapanga was also arrested from Reliance Energy company.  After a few days bail petition was moved in the Session Court but bail was not granted. Even after keeping the arrested in custody without bail for 90 days under UAPA, the ATS didn’t submit any charge sheet in the court. They appealed for another 30 days which was allowed by the court in a hearing that was held in the absence of the lawyers representing the workers.

The workers’ lawyers appealed in the High Court against the Session Court order and prayed for bail. On 3 May 2018, the ATS submitted a 5875 page charge sheet in the court. The whole document weighted almost 15 kgs. The ATS seemed to create an impression that it was a very serious matter and they have arrested some hardcore dreaded Naxalites.

Meanwhile, the families of the arrested workers are living in extreme hardships. The arrested workers were the only earning members of their respective families. These families are now facing acute financial difficulties. One worker’s wife has taken up the job of a house-maid, few are being looked after by their relatives, while others have left the city and gone to live in the village. In the coming days, nobody knows how will these families survive. Their future is uncertain. Even God will not come to aide these Communists!

Translated from the original Hindi article by GroundXero.