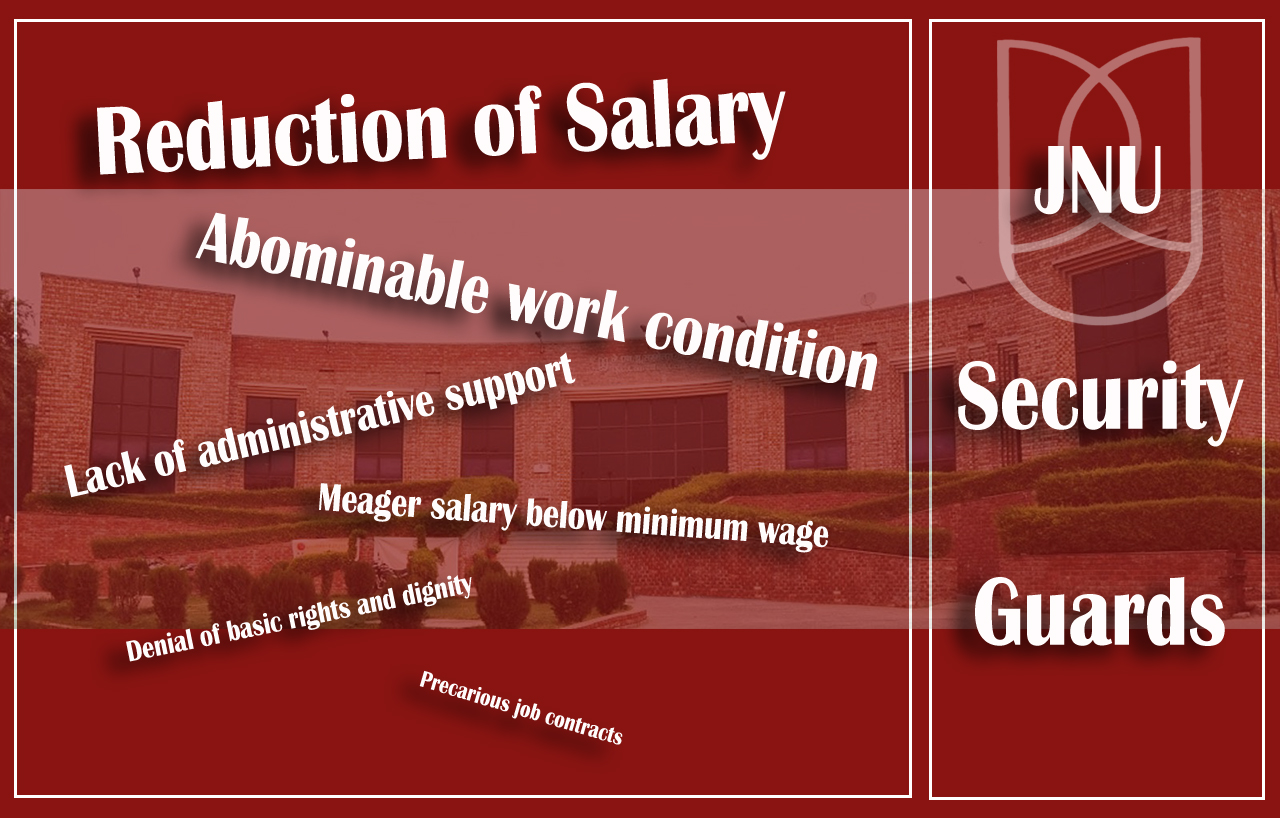 As a likely consequence of the Delhi High Court judgment scrapping the wage hike by the Delhi government, the already meager salary of JNU security guards working under the agency G4S got reduced this month without any prior notice. Workers and students are raising their voices in protest against this unjustified measure. A GroundXero report.

The salaries of the G4S security guards working in the JNU campus got drastically reduced by Rs. 4000-5000. While the lower ranking guards, who sit outside the hostels, centers and parking lots earlier earned Rs.13500-15000 per month, they have been transferred only a sum of Rs. 9000-10000 this month. Though no written explanation or prior notice has been given to the guards, it is heard that this cut has taken place due to the judgment passed by the Delhi High Court on August 4, 2018, scrapping the 37% hike in minimum wages by the Delhi government. While workers all over the country are struggling for a decent minimum wage, this judgment has come across as a highly anti-worker and anti-poor step.

The UK-based G4S company is a multinational giant, and in particular, runs a security agency. It has been known to be treating “its workforce as poorly as the law allows and sometimes even worse”. It has worked as part of the private prison and detention center industry in the US, which is infamous for its severe violation of human rights, especially racism.

However, as per Labour Laws in India, any dispute related to wages needs to be addressed by the Principal Employer, which, in this case is the JNU administration. Therefore it is the university administration that remains answerable for this unjustified reduction of the already meager salaries. It must also be noted that as ‘providing security to the campus’ is a permanent nature of work, the university cannot employ contract security guards in this job, according to the Contract Labour (Regulation & Abolition) Act, 1970.

In 2016, the security guards had to fight a hard battle for their right to the bonus, or against arbitrary cutting of salaries for absolutely arbitrary reasons. The salary cut was usual if a guard was found to be checking mobile phones or drowsy during duty-hours. Around that time, security officers Suraj Prakash and Parveen Kumar of G4S beat up an ordinary security guard for a similar reason. The guard had to be hospitalized due to heavy bleeding from his ears. A large number of guards and workers protested unitedly against this incident. Students joined in large numbers and blocked the main gate of the campus for hours till the next day, but the JNU administration did nothing for the protection of basic rights and dignity of the security guards and G4S suspended the guards who were at the forefront of the protest. 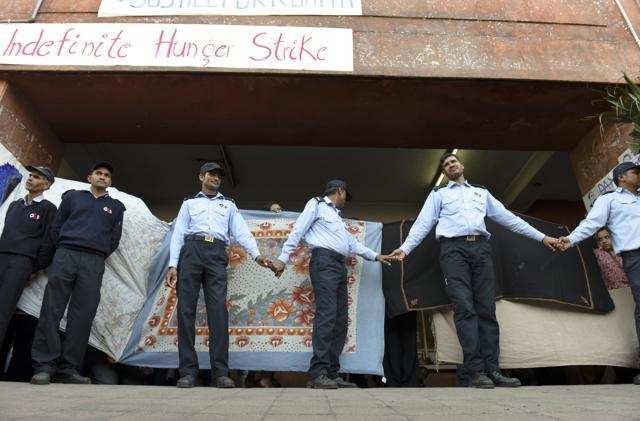 The salary cut is taking place all over Delhi for workers in different sectors. In JNU, it is being apprehended that mess workers, safai karamcharis and other sections of contract workers are next in line.

Latest update: Perhaps fearing protest from workers and students alike, although no official statement or circular has been given to the workers, the G4S officials communicated informally to all security guards that their salary will actually not be decreased and they would receive arrears for the present month along with the next month’s salary. The workers have also been advised by the G4S officials not to involve students in this matter.

This report has been partially compiled from a pamphlet published by JNU students’ organization COLLECTIVE on September 8, 2018.