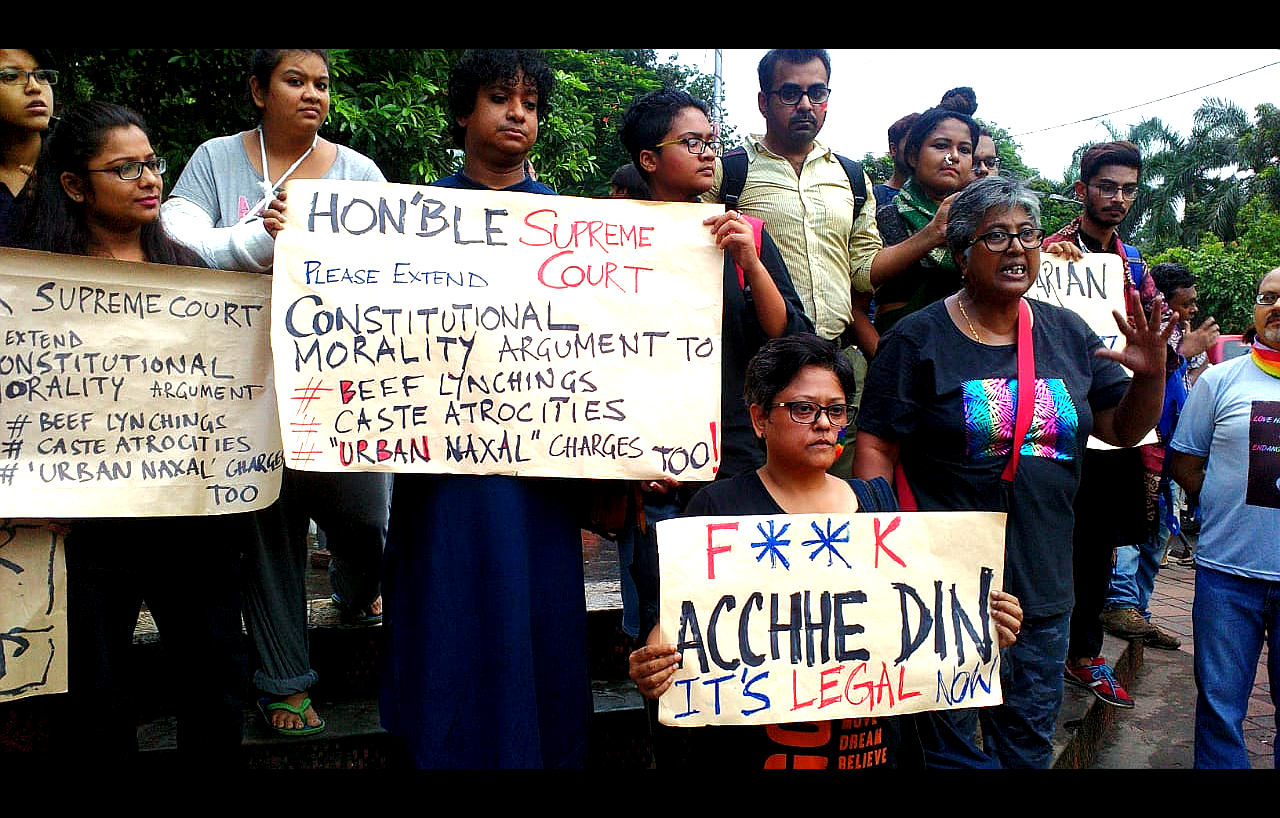 LGBTQI Community in Kolkata Celebrates Abolition of 377 with Protests

Even as members of the LGBTQI community in Kolkata cheered the court verdict, a section from the community took a political stand against the recent arrests of human right activists under the Unlawful Activities Prevention Act (UAPA). Panchali Kar reports for GroundXero.

The bell finally rang on 6th of September, 2018, sharp at 11:40 am. A constitutional bench, headed by Chief Justice of India, Dipak Misra, and comprising of Justices RF Nariman, AM Khanwilkar, DY Chandrachud and Indu Malhotra, legalised same-sex relations between consenting adults, in four concurring judgments. This path-breaking verdict stated, Section 377 of IPC unconstitutional and scrapped it off partially, decriminalising same sex relationships. Earlier, such relationships used to be a punishable offense, stated under this section as “Whoever voluntarily has carnal intercourse against the order of nature with any man, woman or animal shall be punished with imprisonment for life, or with imprisonment of either description for a term which may extend to ten years, and shall also be liable to fine.” As per section 377, any sexual act other than pino-vaginal sex was an offense, which was a big blow for the practice of anal sex, which, often times, happens to be a normal practice amongst the homosexuals. The petitions against Section 377 were heard from 9th to 19th of July, 2018, which eventually led to the big day.

(i) Section 377 of the Penal Code, in so far as it criminalises consensual sexual conduct between adults of the same sex, is unconstitutional;

(ii) Members of the LGBT community are entitled, as all other citizens, to the full range of constitutional rights including the liberties protected by the Constitution;

(iii) The choice of whom to partner, the ability to find fulfillment in sexual intimacies and the right not to be subjected to discriminatory behaviour are intrinsic to the constitutional protection of sexual orientation;

(iv) Members of the LGBT community are entitled to the benefit of an equal citizenship, without discrimination and to the equal protection of law; 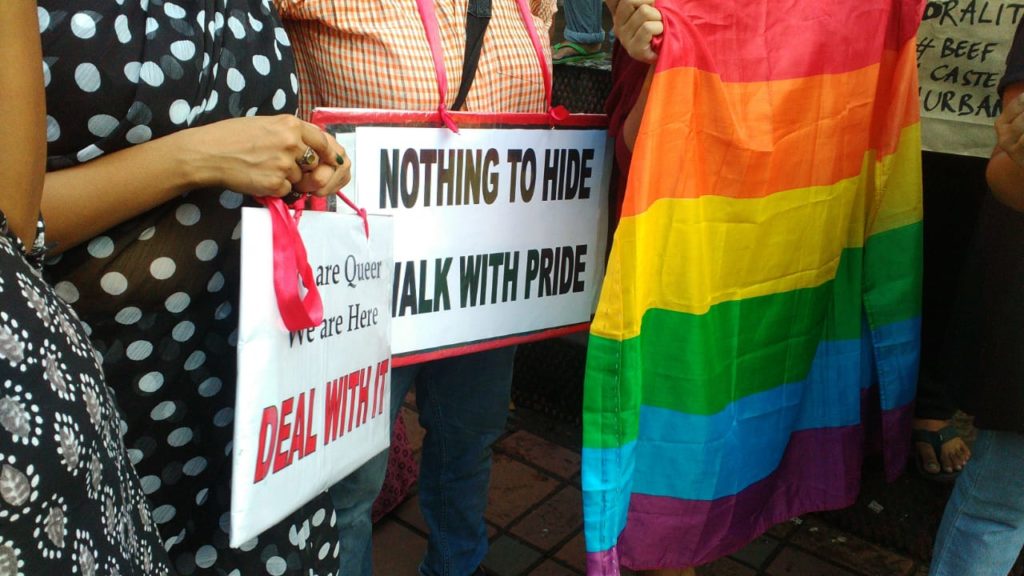 While making the historical verdict, CJI Dipak Mishra had quoted German thinker, Johann Wolfgang von Goethe, “I am what I am, so take me as I am.” A law that was 158 years old, and was imposed by the British Government, to please the church, was thus scrapped. It took us a long time to get over the colonial hangover and accept that our fellow humans have the right to basic dignity! Indu Malhotra, the only female judge in the division bench, correctly directed our attention towards the delay, saying, “History owes an apology to members of the community for the delay in ensuring their rights.” It was high time sexual orientation and practices were considered under the light of right to privacy and other constitutional rights. CJI Dipak Mishra firmly stated, “Only Constitutional morality and not social morality can be allowed to permeate rule of law… Sexual orientation is one of the many natural phenomenon. Any discrimination on basis of sexual orientation amounts to violation of fundamental rights. After judgement in Puttuswamy case, privacy has been raised to fundamental right.”

After the historical verdict, the LGBTQIA communities and other progressive groups in solidarity were overwhelmed with utmost feeling of joy, and celebrations overtook nearly every city of the country. The celebratory mood was also observed in the social media. In Kolkata, the members of the LGBTQIA+ community gathered at Cafe Drifter for a live screening of the upcoming verdict, sharp at 9:30 am in the morning. There were goosebumps all around till the final call was taken. Then it was time for celebrations. Later in the day, hundreds of the members of the community from all over the state gathered at Ranu Chhaya Mancha in front of the Academy Of Fine Arts; they shouted slogans, embraced each other with big hugs, cried tears of joy and nostalgia, danced, sang, commemorated with their fellow fighters who had been through the worse during the years of criminalized homosexuality. 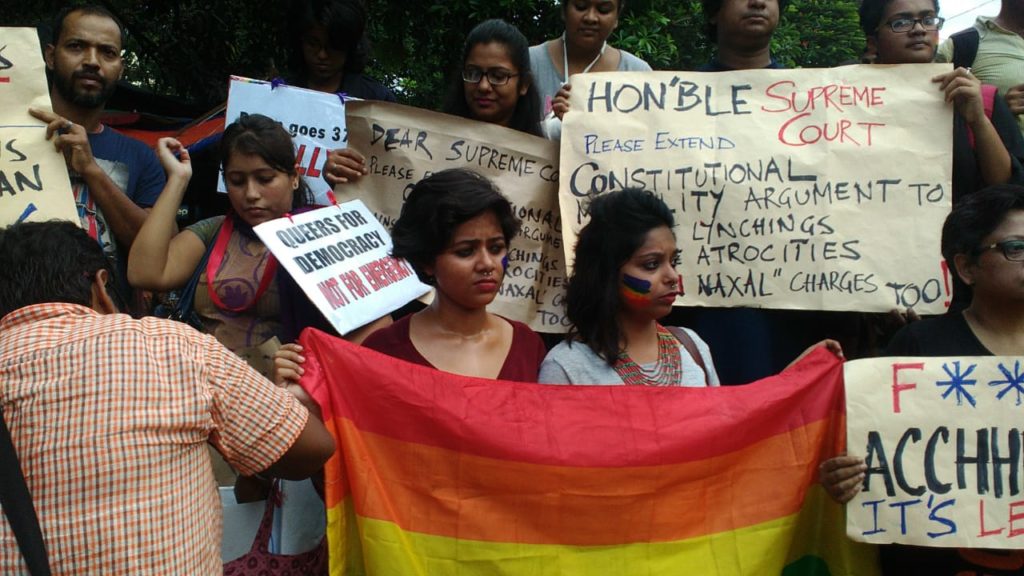 The bad weather couldn’t tone down the pompousness of the life changing event. However, many also opined, that legalization was just the tip of the iceberg. Even as members of the LGBTQI community cheered the court verdict, a section from the community took a political stand against the recent arrests of human rights activists under the Unlawful Activities Prevention Act (UAPA).
Avinaba, who has been an active member of the community, pointed out that gender struggle and identity politics aren’t segregated from class struggle. The demand for the basic rights “Roti Kapda aur Makan” is very much pertinent amongst a large section of the community, who are unemployed and underprivileged due to social discrimination and lack of acceptance. Avinaba also pointed out that the LGBTQIA community is not a homogenous entity per se. Being from a minority caste community, or being a Muslim often intersects with one’s status of being a lesbian, or a trans-woman, for example, thus creating complex identities which need to be addressed further.

Anindya spoke about the specific kind of social stigma which lies at the intersection of one’s status of being both a caste and a gender minority, as well as the discrimination that exists in health care, and within other social rights and services. Anindya also pointed out, how tough it is to get an apartment on rent if a person belongs to caste, religion, or gender minority. Therefore, the struggles should be unified to a large extent. 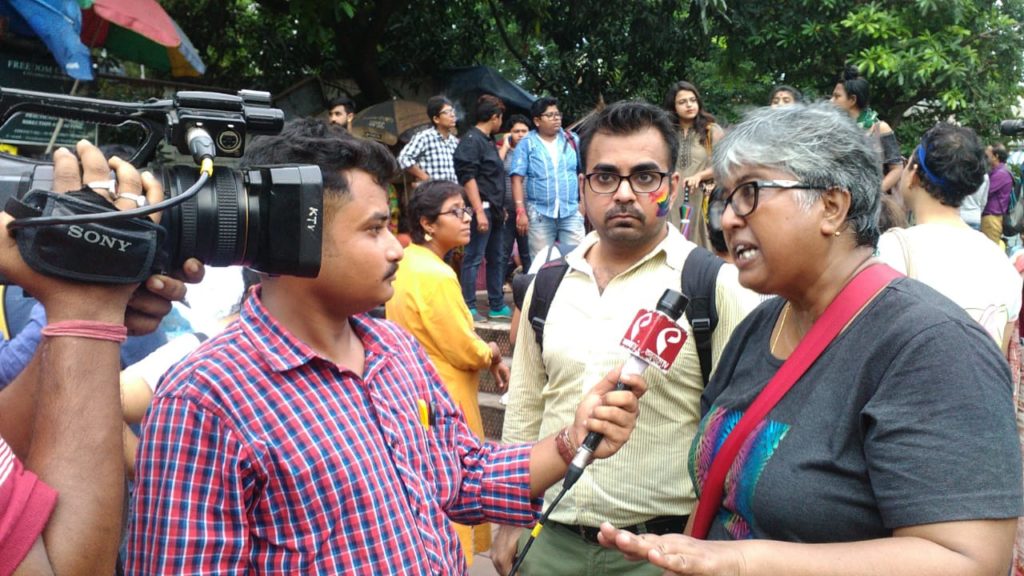 Malabika from Sappho, speaking to the media

Malabika, a senior activist who runs Sappho For Equality, has put forward a very strong statement that the Honourable Supreme Court should not stop with decriminalisation of homosexuality. The question of fundamental rights must also be considered in the context of what outfit we wear, what meat we eat, what books we read. Malabika strongly condemned the arrest of the eminent social activists, dalit activists, human rights activists, lawyers etc. and said that indeed it is a big day for celebration, however we must also remember that the Indian state has been horrifically anti-choice on the issues of the arrests of Varavara Rao, Sudha Bhardwaj, Father Stan Swamy, and the other activists. Unless they are released with dignity, human rights in this country is being trampled shamefully.

Another activist Sumita pointed out, the prevalent social discrimination can be way more horrific than the legal discrimination, and said that, legalization does not mean overnight social acceptance. However, at the moment, we have a legal base to justify our rights.

“Indeed it is a big day for celebration, however we must also remember that the Indian state has been horrifically anti-choice on the issues of the arrests of Varavara Rao, Sudha Bhardwaj, Father Stan Swamy, and the other activists”: Malabika, Sappho For Equality

Prof. Pratulananda Das from Jadavpur University, talked about the backlash that the community would have to face from the majoritarian queer-phobic society, because legalization has also brought the issue into broad daylight. Das pointed out that the reactions of the common people on Yahoo news, once the verdict was out, was terribly homophobic and transphobic.
Upasana Agarwal, who runs a Queer Cafe called Amra Odbhut, raises extremely pertinent questions on Facebook. Her post states, “…377 wasn’t just a homosexual law, it affected trans people, trans sex workers, queer folks outside the urban landscape. There’s a question of access here. Will police violence stop? Maybe for those of us who can speak in English, and defend ourselves with legislative knowledge, but when does power need an excuse to exert itself? My neighbours will not decide overnight that they need to stop plotting to make my living situation difficult; families will not stop hurting their queer and trans kids, trans folks will not escape homelessness and cis brutality (within the community and otherwise)… Will us privileged, upper class, upper caste queers give up space and fight alongside those who are denied a voice and oppressed continuously by the mechanisms that uphold us? I hope we will take a step back and really consider the endless external and internal battles that await us still.” 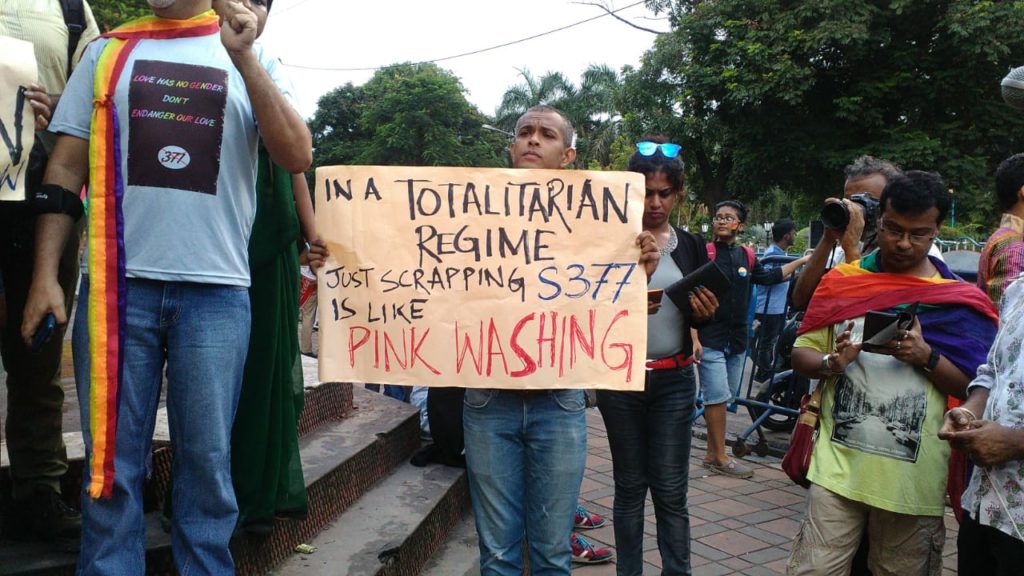 This isn’t an end, but a hurdle — a huge hurdle indeed — that has been crossed. The bigger run begins right here, right now. The larger social changes won’t happen overnight. Sensitisation is the key, and every one of us needs to put forward our efforts in every little way possible to move the mountain that’s been suppressing and oppressing us for ages.

The author is a political worker, performance artist, writer and documentary maker. She is a part of West Bengal Forum for Gender and Sexual Minority Rights – one of the collectives that filed the petition against Section 377. Photos are courtesy Debadrita Bose.