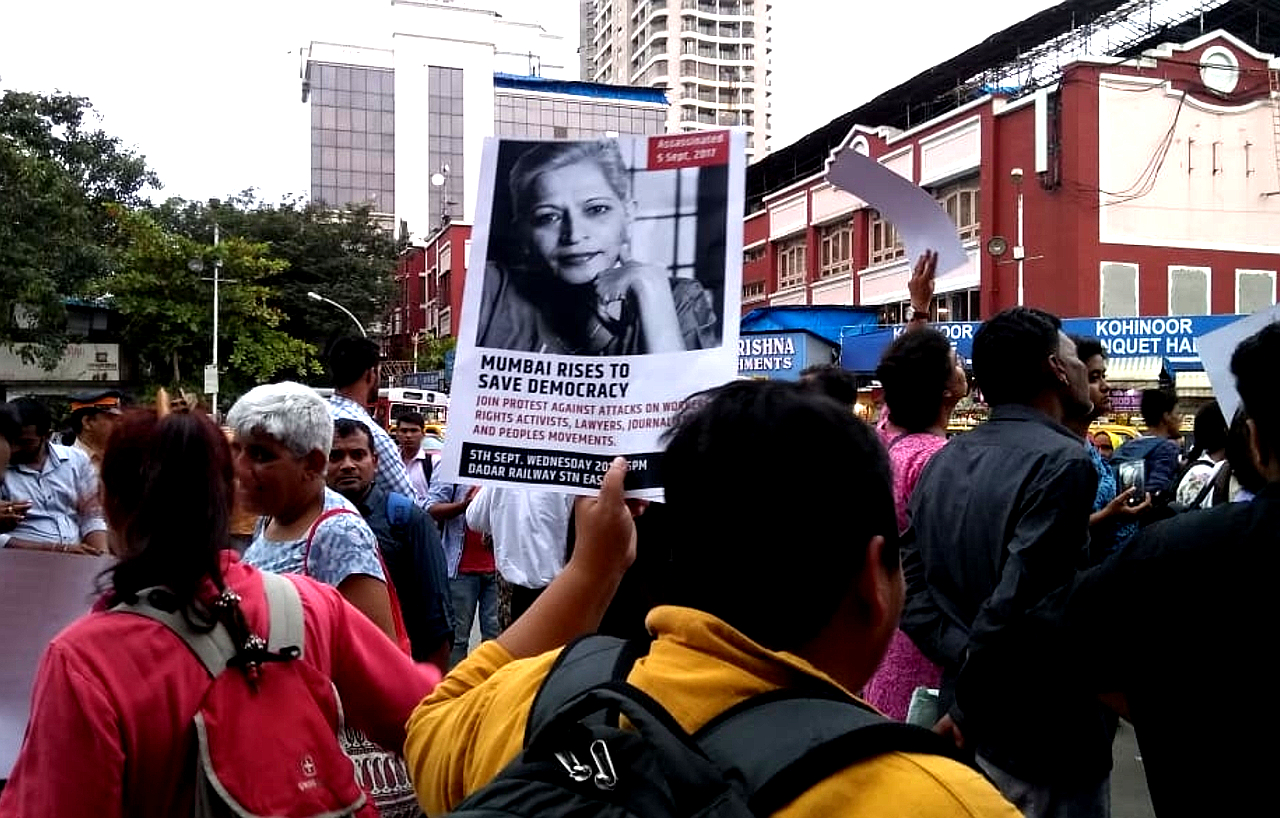 Workers, activists, students, lawyers and human rights organisations come together in Mumbai on the first death anniversary of Gauri Lankesh, to protest against state homicides, state violence and state-sponsored socio-political oppression at every level in India. “Whom all will you arrest? Kis kis ko qaid karoge?” – the protestors demand. A GroundXero report.

On September 5th, numerous organisations in Mumbai, including student organisations, trade unions, lawyers and human rights organisations, and other political outfits, and hundreds of individual citizens assembled right outside the Dadar railway station to protest against the current climate of ‘undeclared emergency’ in the country. The total turnout reached almost 400, as slogans were chanted and songs were sung against the illegal arrests of rights activists, journalists, professors and lawyers like Sudha Bharadwaj, Vernon Gonsalves, Arun Ferreira, Sudhir Dhawale, Shoma Sen, Surendra Gadling and others. September 5 was also the one year death anniversary of journalist and activist Gauri Lankesh, who was murdered last year in Bangalore by gun men who have recently been identified by the CBI as having links with the Hindu radical outfit Sanatan Sanstha – the same people alleged to be behind the murder of rationalist Narendra Dabholkar 5 years back, in Pune. 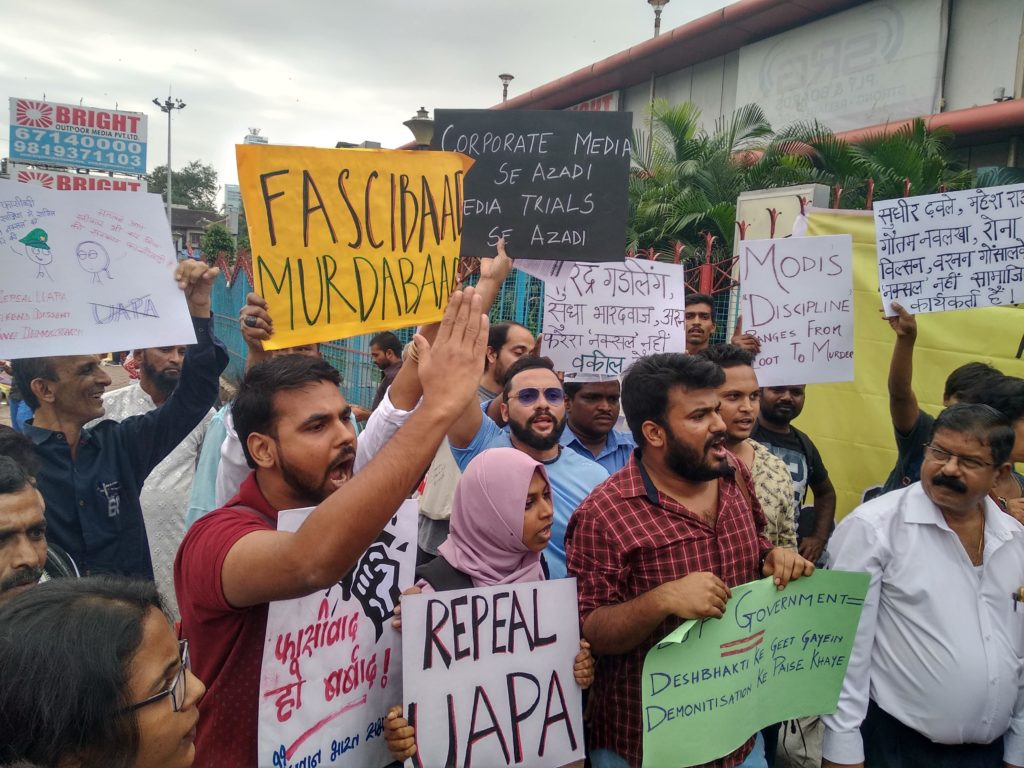 The protest titled “Mumbai Rises to Save Democracy: Kis Kis ko Qaid Karoge?” was organised by a collective of organisations and individuals called the “Concerned Students and Citizens of Mumbai”. Hundreds of students from Mumbai-based institutions including Tata Institute of Social Sciences, IIT, Tata Institute of Fundamental Research, and several other colleges, shouted anti-Fascist slogans and sang ‘songs about the dark times’ as the crowd kept gaining in size throughout the two and half hour long protest demonstration. The students were joined by lawyers’ organisations like PUCL and IAPL, democratic rights organisations such as CPDR, gender justice organisations such as Bebaak Collective, Labia, Forum Against Oppression of Women, trade unions like Bigul Dasta, and several other groups such as Police Reforms Watch, etc. “The Police has used the Elgar Parishad as an excuse, and falsely claimed that the attacks were instigated by organisers of this program. It produced a false narrative of “Urban Naxal” and charged 18 activists under Unlawful Activities Prevention Act (UAPA), in connection to the same case”, said the pamphlet issued by the organisers. Angry demands were made for arrest of (Sambhaji) Bhide (founder of the Shivpratishthan Sanghatana, former member of RSS) and (Milind) Ekbote (Executive president of Samasta Hindu Aghadi and Gau Raksha Abhiyan), who have been accused of masterminding the attacks post Bhima Koregaon. 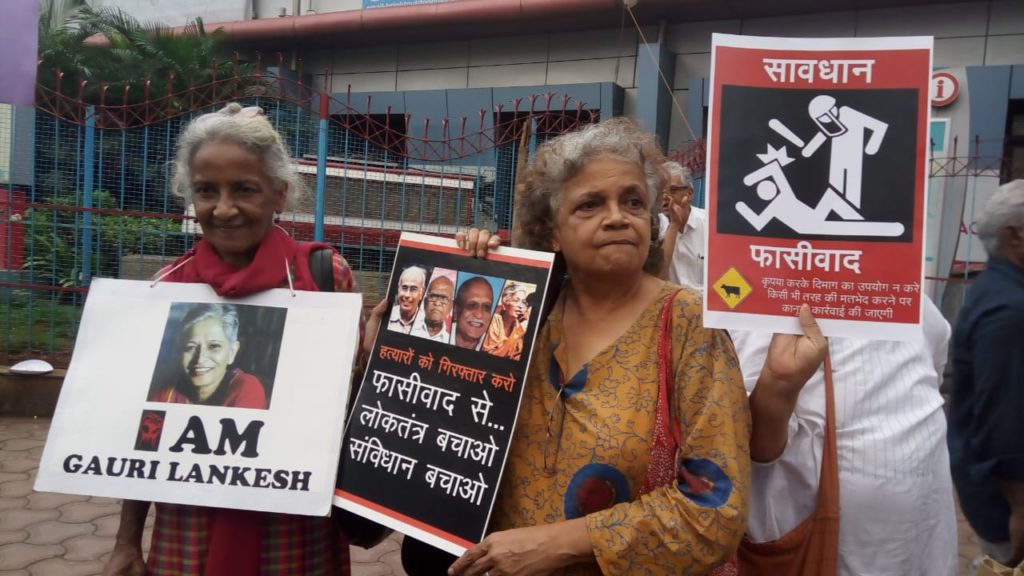 While demanding unconditional release of those arrested under UAPA after the attacks in Bhima Koregaon, arrest of Milind Ekbote, Sambhaji Bhide and members of Sanatan Sanstha, and repeal of the draconian UAPA law, the various speakers attacked the BJP Government for rampant attacks on democratic spaces and assertions, and it’s deflecting tactics when it comes to real material issues facing the people of the country, such as failures of demonetization and destruction of jobs, disappearance of Vijay Mallya and Nirav Modi after looting thousands of crores of Indian citizens’ money, unprecedented shooting up of petrol-diesel price, record fall in the value of rupee, alleged corruption by the government in the Rafael fighter jets contract, failure of the Aadhaar project, increasing costs of education and health services, organised lynch killings of Dalits and Muslims, instances of burning of the Indian Constitution in public, meticulously planned sexual assault cases of Kathua, Unnao where BJP party leaders are involved, organized Hindutva terror outfits that have been caught manufacturing bombs and explosives, and so on. Several speakers spoke about the life and work of journalist Gauri Lankesh, and described her murder as a watershed moment in the history of hollowing out of the Indian democracy. 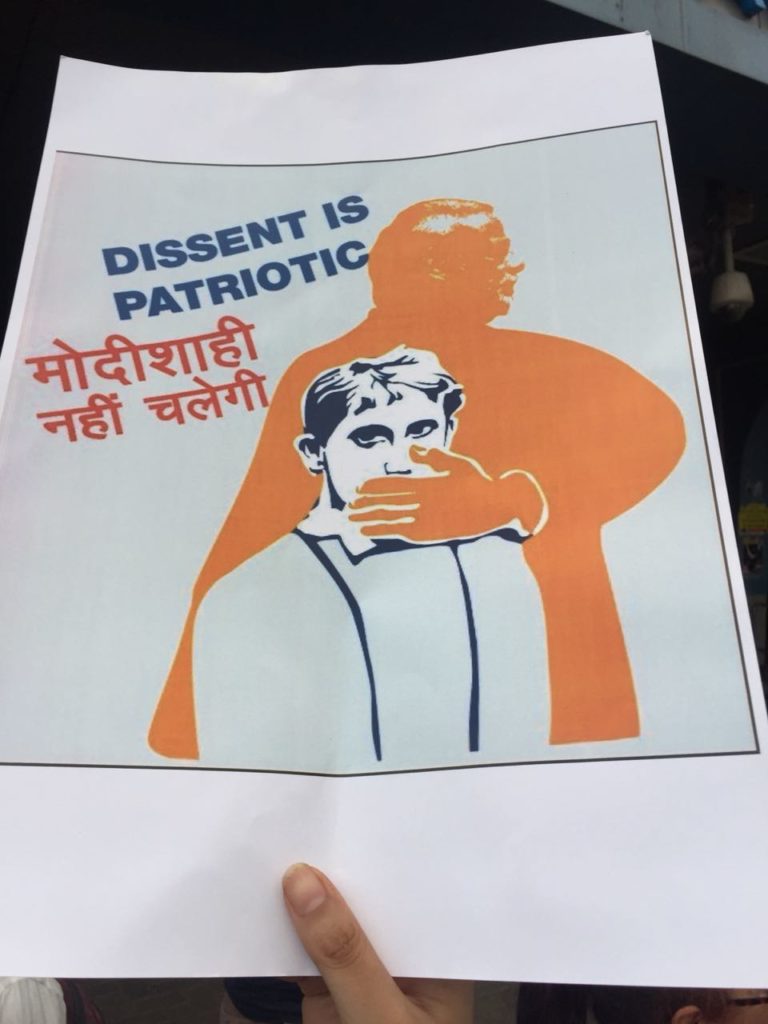 The protest-cum-public meeting also saw several cultural activists and students singing songs of resistance. Cultural activists from the Samta Kala Manch lit up the station outskirts with songs about annihilation of caste, in memory of Ambedkar, Phule, Bhagat Singh. Several speakers highlighted the recent attacks on the Constitution of India, attacks on dalits, muslims, adivasis and women in this country, as a desperate attempt of the reactionary forces to replace the Constitution by Manudharma. Professor Jairus Banaji, a historian teaching at SOAS London, also attended the protest, and spoke about the attempts at creation of a culture of fear across the country, and claimed that there is good chance that BJP-led forces will lose the upcoming elections if people somehow get to overcome this fear that’s gripping the country today.

“They are terrified of losing support among the dalits in this country, so they don’t even want the word ‘dalit’ to be used, they want to crush the identity of dalits” – Jairus Banaji

The reference was specifically directed at the recent directive issued by the Ministry of Information and Broadcasting asking broadcast media not to use the word ‘dalit’. 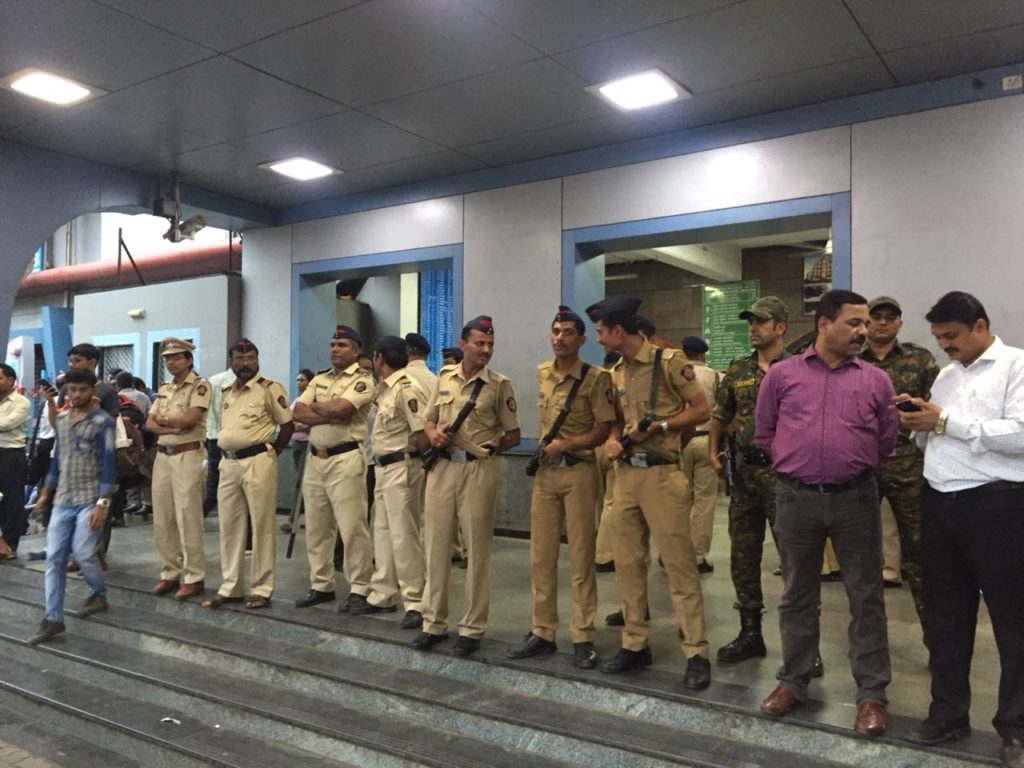 Similar protests were organised across the country on September 5, including places like Delhi, Kolkata and Bangalore. COSTISA, a platform of student organisations across IITs in Madras, Bombay, Kharagpur, Kanpur, BHU and IMS, brought out a press note condemning a September 4th article published by Bengali newspaper Anandabazar Patrika:

“it was declared that the Central Intelligence has marked some organizations in West Bengal which reportedly act as a frontal organization of the “Maoists”.

In the list of organizations, a constituent organization of COSTISA, Ambedkar Bhagat Singh Study Circle (ABSC) has been named.” A lathi juloos was taken out in Araria, Bihar where rural landless labourers, local progressive groups and students came together to symbolically smash fascism and draconian laws like UAPA. Earlier in the day, the Gujarat police arrested ex-IPS officer Sanjiv Bhatt. Sanjiv Bhatt had accused Narendra Modi, then Chief Minister of Gujarat, of inaction during the 2002 pogrom against Muslims. He had been earlier sacked from office, right after Narendra Modi became the Prime Minister. On Wednesday, the Court however refused police remand for Bhatt. 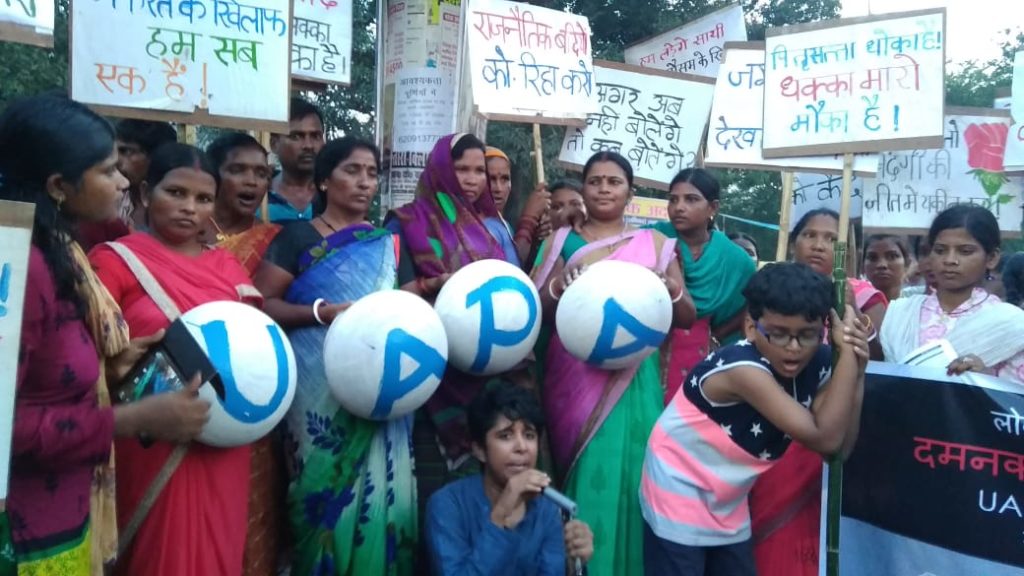 Yesterday, at the second hearing in the case of house arrests of Adv. Arun Ferreira, Gautam Navlakha, Adv Sudha Bharadwaj, Varavara Rao and Vernon Gonsalves, the Supreme Court extended “Interim relief” of house arrest till Wednesday 12th Sep, when the next hearing is listed. Maharashtra police had filed their counter-affidavit at the court less than 15 hours before the scheduled hearing. The affidavit mainly mentioned the seizure list of what the police claim as “evidence” in the form of emails and other documents from the laptops, mobile phones and memory devices seized during the raids, while asking for permission to “take them in police custody and interrogate them in accordance with law”. It also claimed that the five arrested activists were planning “large scale violence”, and that they are “active members” of the banned Communist Party of India (Maoist). However, the affidavit does not mention even once, the so called “plot to kill Modi”. Nor does it talk about any of the letters that have made screaming headlines in mainstream media over the past 3 months. 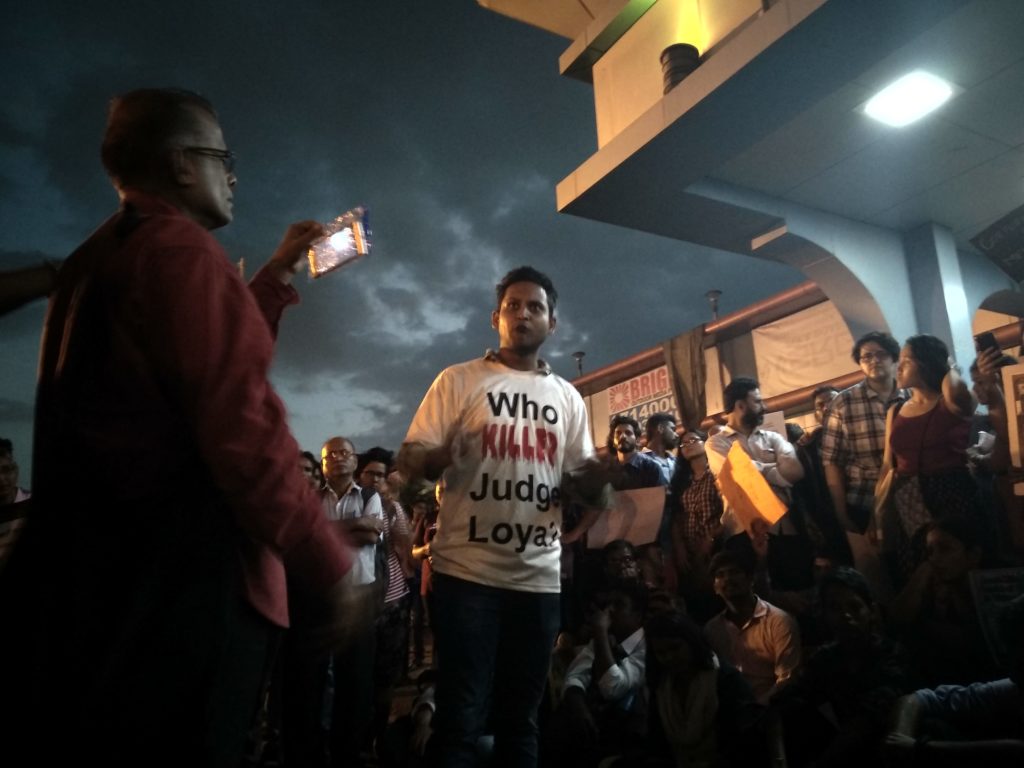 In addition to clearly admitting to ideological biases at various places in the affidavit, the police has gone on to make claims in contrary to statements issued by several activists who have been raided and/or arrested. At one place the affidavit says, the investigative agency “decided to videograph the entire procedure of conducting the search right from the time the agency knocked at the doors of the respective individuals till the material recovered were seized, sealed, and punchnamas were drawn in the presence of individual punchas.” While Prof. Anand Teltumbde, a professor at the Goa Institute of Management, has in fact claimed that he was not at his home when the police arrived to search it. He said the police had threatened a security guard to get the keys, and had taken away the mobile phones of security personnel and disconnected landlines. “We were asked by policemen to keep the door of the bedroom open and sleep…We wake up to them. Wherever we go inside the house, they watched us. It completely disorients your mind,” said Sabha Husain, partner of activist Gautam Navlakha. While extending the house arrest, the Court came down heavily on the police for insinuating that the court should not have interfered with the police investigation. “I saw Assistant Police Commissioner, Pune insinuating that SC should not have intervened at this stage. He has no business telling that”, Justice Chandrachud reportedly told the Additional Solicitor General Tushar Mehta. He also rebuked the police for “ruining people’s reputation.” 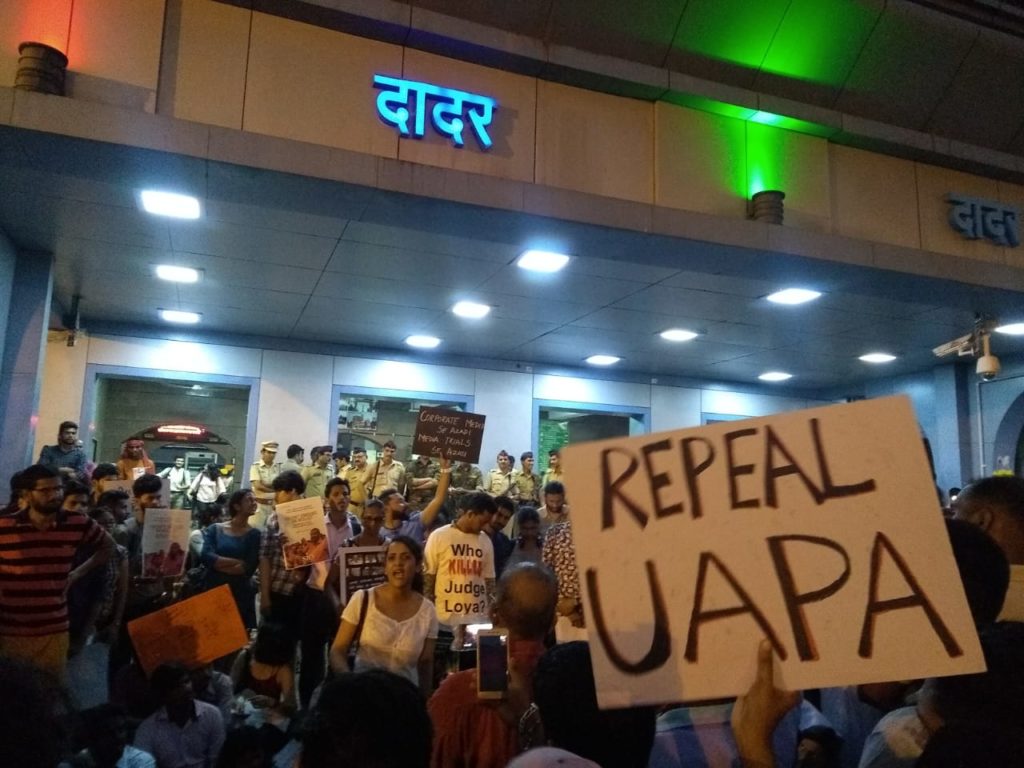 Meanwhile the Bhima Koregaon judicial commission hearings started in Mumbai, on Wednesday. Milind Ekbote was present at the hearing, represented by Niteen Pradhan. The first witness, who was a victim of the violence, was asked questions that if the rioters were naxals. The witness seemed to not know much about who naxals are, or what a Maoist is. “Over a kilometre and half before the Vijay Stambh, we were stopped by other fellow Ambedkarites who were running back from the memorial. They had been attacked by some people carrying saffron flags. We decided to get off the bus, remove all the banners that could identify our affiliation with Ambedkarite movement and tried to take shelter nearby,” she reportedly told the commission. 12 witnesses would be examined in Bombay. Some have already alleged that lawyers of Ekbote are mentally manipulating the witnesses. Milind Ekbote was arrested in March and is currently out on bail. Sambhaji Bhide, another alleged mastermind behind the riots, is yet to be arrested.

All photos are courtesy GroundXero and Mumbai Rises to Save Democracy