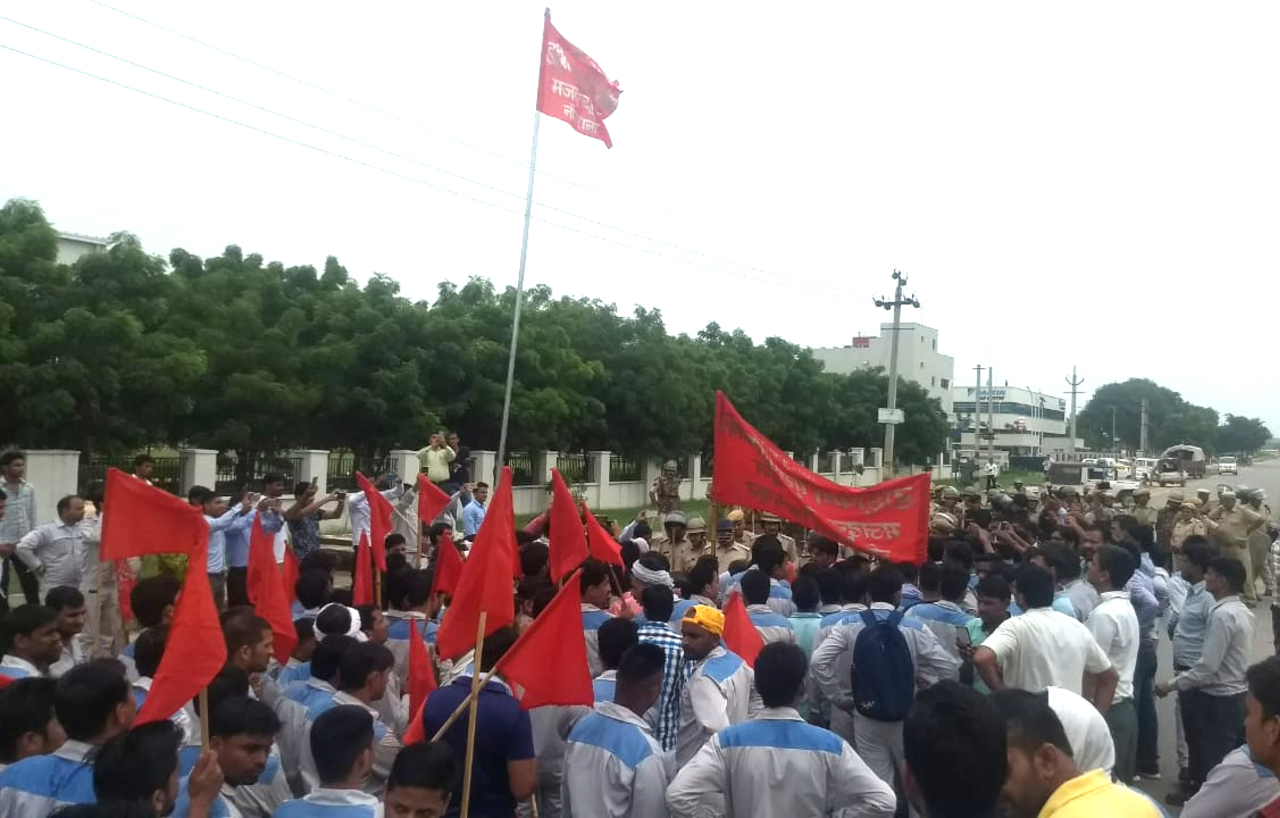 The workers’ attempt to unfurl the red flag at the Japanese air conditioning factory Daikin, though symbolic, marks the rise of the workers assertion and unity in this industrial belt where the government and the companies are determined to curb such class unity of the workers. A GroundXero report from Neemrana, Alwar, Rajasthan.

It was a historic event in Neemrana (Alwar district) of Rajasthan. A newly recognized and registered workers’ union – Daikin Air Conditioning Mazdoor Union, decided to unfurl the red flag at the Japanese air conditioning factory’s gate. 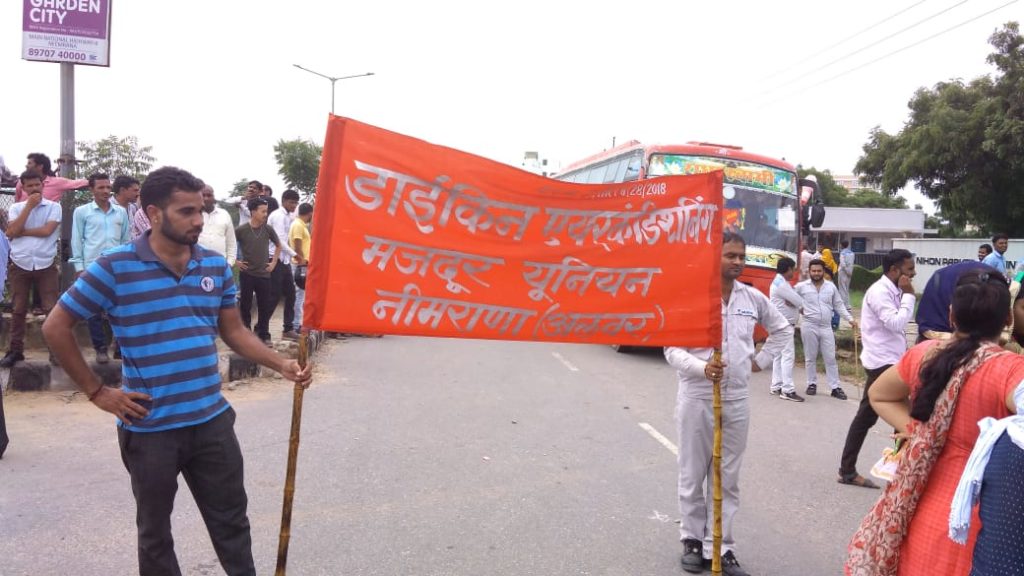 Accordingly, yesterday morning, the Daikin workers, as per their pre-scheduled program, reached the factory gate in ‘Japanese Zone’, Neemrana, with Red Flag of the independent union in their hands. The Company – determined to stop the program – called the police and administration officials. 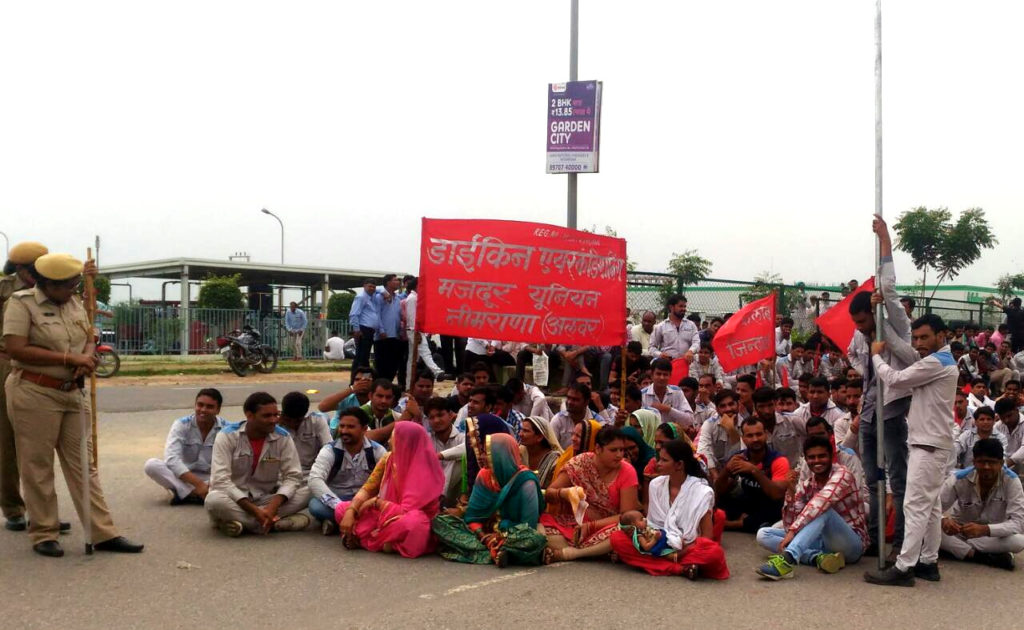 The workers (close to 500 in number) were stopped by the police when they were 500 meters away from the factory gate. But the workers stood firm in their resolve to unfurl the flag. A committee of 10 workers, ex-workers and union office bearers, including the President and General Secretary of the Union, was selected for discussions with the administration and company officials. When an entire day of discussion did not break the stalemate, around 7pm, the workers’ rally marched ahead with the flag, at which point the President and the General Secretary of the Union were arrested by the police. It is also to be noted that right after the registration of the union, the company had transferred 9 leading workers to various other parts of the country. 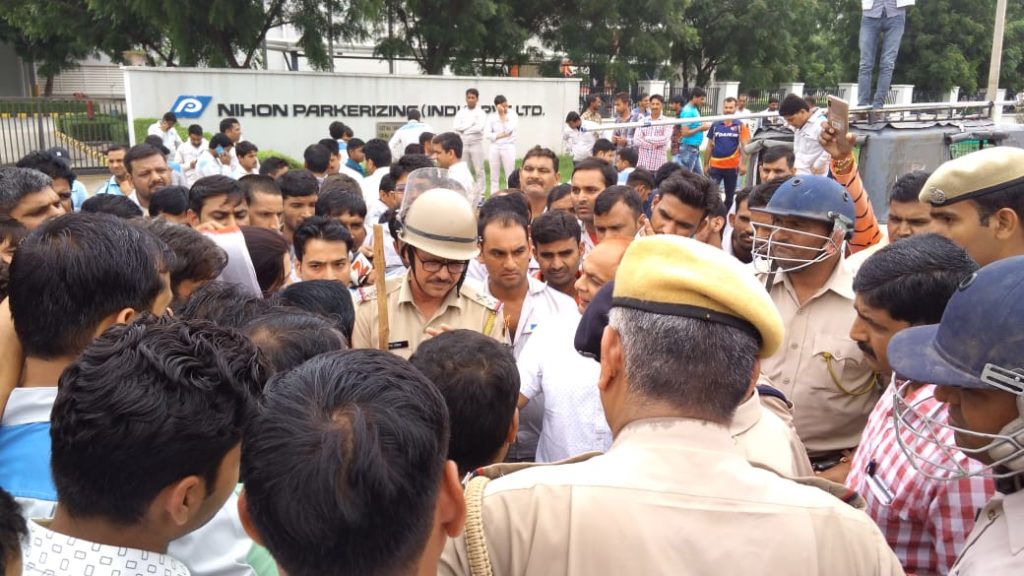 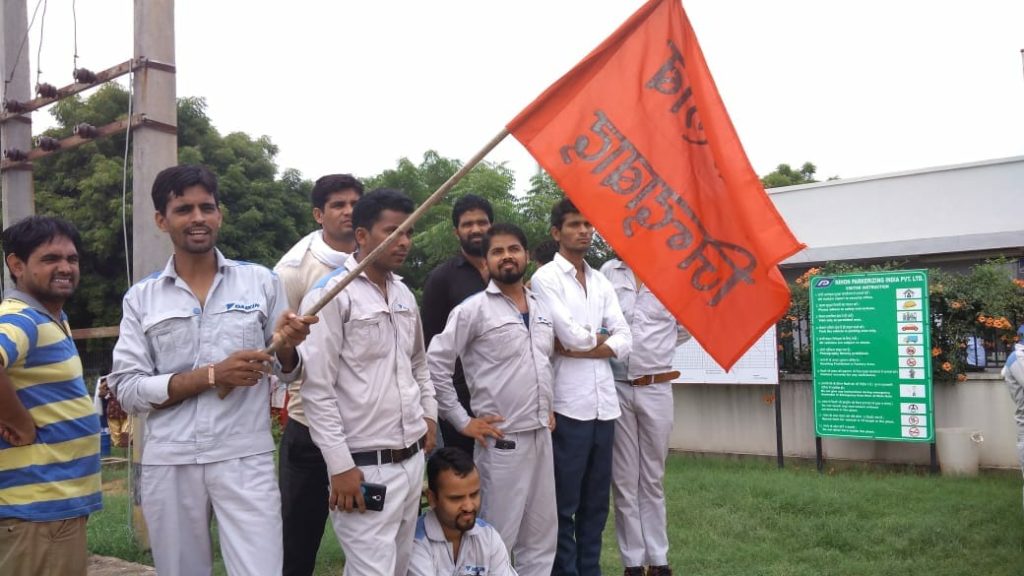 Only a few days back, on 29th August 2018, after over 5 years of intense struggle, termination of 40 worker leaders including the President (Rukmuddin) and General Secretary (Daulat Ram) of the present union, many police cases and other government and company repression including attacks from police and hired goons, workers of Daikin AC were granted formal registration of their independent Union. This tough and exhausting struggle had been on since 2013. Despite the hardships and losses, Daikin workers held on to their class unity and ultimately won their grounds. Labour Department of the Rajasthan Government had to register and recognize their union on the order of the Jaipur High Court. It was to celebrate this victory that the newly recognized union decided to unfurl the red flag at the factory gate.

In this entire industrial belt, workers are denied the rights of forming a union. There are very few permanent jobs, giving rise to an ever insecure and ever dispensable workforce. Daikin workers working on the final assembly line, where ‘production target’ is the sole priority, are required to assemble one AC in every 25 seconds. Each day of the last 5 years had been a fight for their rights and dignity. Even without any legal recognition, the workers’ union operated and galvanized not only permanent and contract workers of the factory but also thousands of other struggling workers in Neemrana’s ‘Japanese and Indian zones’, and later expanded their area-based self-organization into a platform named Mazdoor Sangharsh Samiti, which apart from Daikin workers also included workers of Honda, Sriram Pistons, etc. 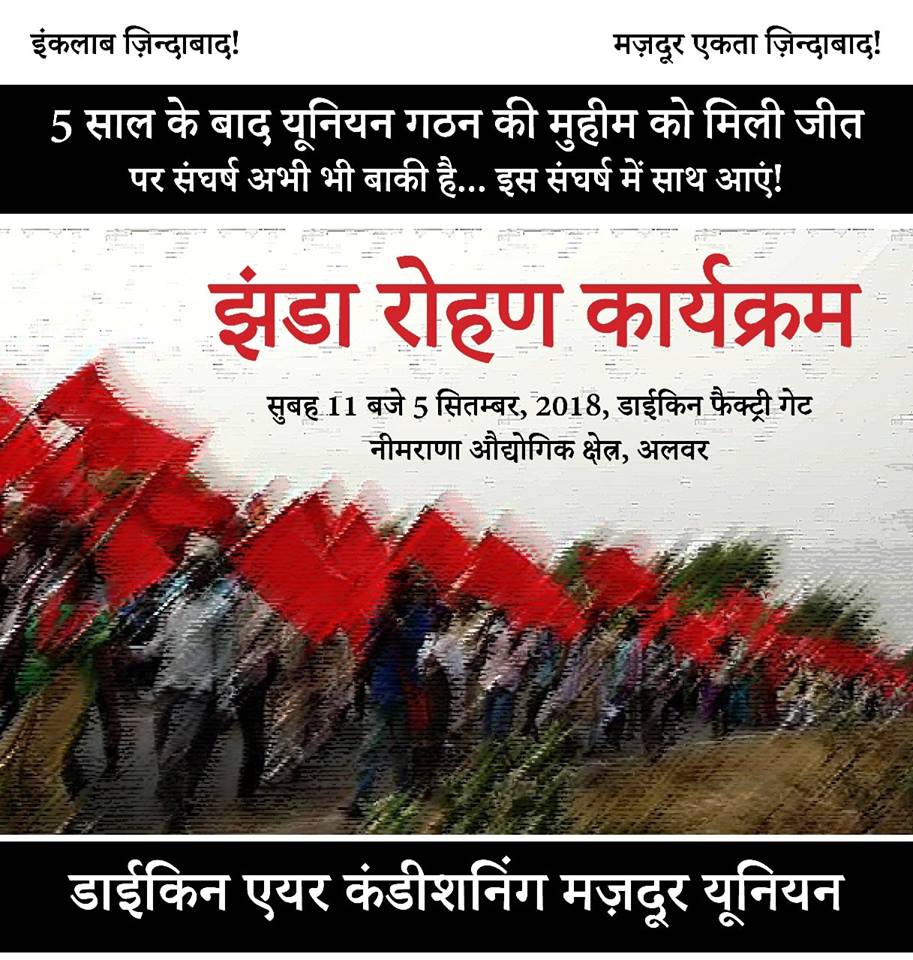 The workers’ attempt to unfurl the red flag at Daikin, though symbolic, marks the rise of the workers assertion and unity in this industrial belt where the government and the companies are determined to curb such class unity of the workers.