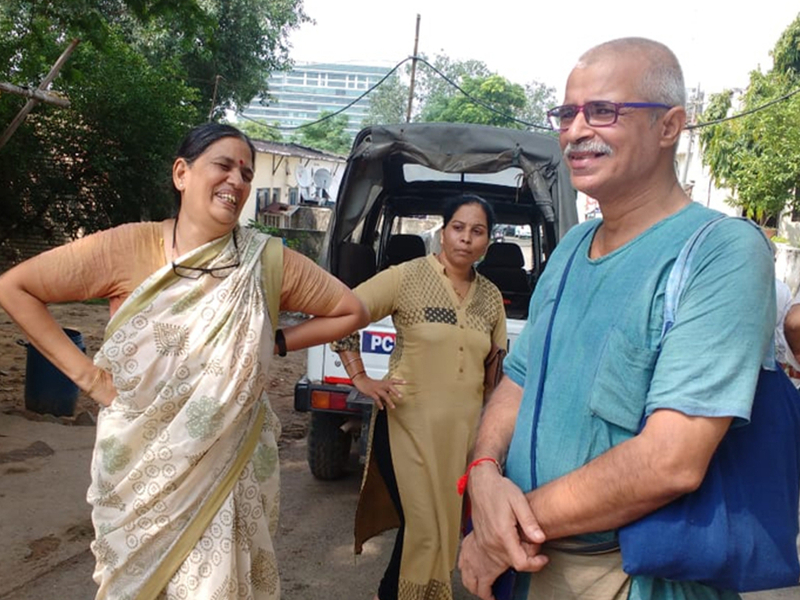 Activists and Lawyers Arrested Across the Country, “Undeclared Emergency” More Real Than Ever

Throughout the day today, Central and Maharashtra Governments, together with their Telangana and Jharkhand counterparts, conducted raids at the houses of prominent activists, lawyers, writers and journalists, including Advocate Sudha Bharadwaj (National Secretary, PUCL) in Faridabad, Father Stan Swamy in Jharkhand, Senior Writer and Poet Varavara Rao, his two daughters – Anala and Pavana, ‘The Hindu’ journalist KV Kumaranath, English and Foreign Languages University (EFLU) Professor Satyanarayana, ‘Namaste Telangana’ journalist Kranthi Tekula – all in Hyderabad, Anand Teltumbde (General Secretary, CPDR) in Goa, Gautam Navlakha (founder member, PUDR) in Delhi, Advocate Arun Ferreira (IAPL), writer Vernon Gonsalves and Advocate Susan Abraham in Mumbai. The raids were followed by subsequent arrests of Sudha Bharadwaj, Gautam Navlakha, Vernon Gonsalves, Varavara Rao and Arun Ferreira. Clearly the ruling powers are jittery about the upcoming polls of 2019 and the continuing unrest in the country against their disastrous policies when it comes to the economy, agriculture, education, job creation. Going by the indications so far, such brutalities and coercion on people will continue, especially since now that the ‘wave’ of 2014 has clearly died. The biggest worry however is that, it is not just a question of an election. This is how democracies have always rolled out the red carpet to dictatorships across the world. GroundXero reports.

A joint statement condemning the arrest can be signed here. 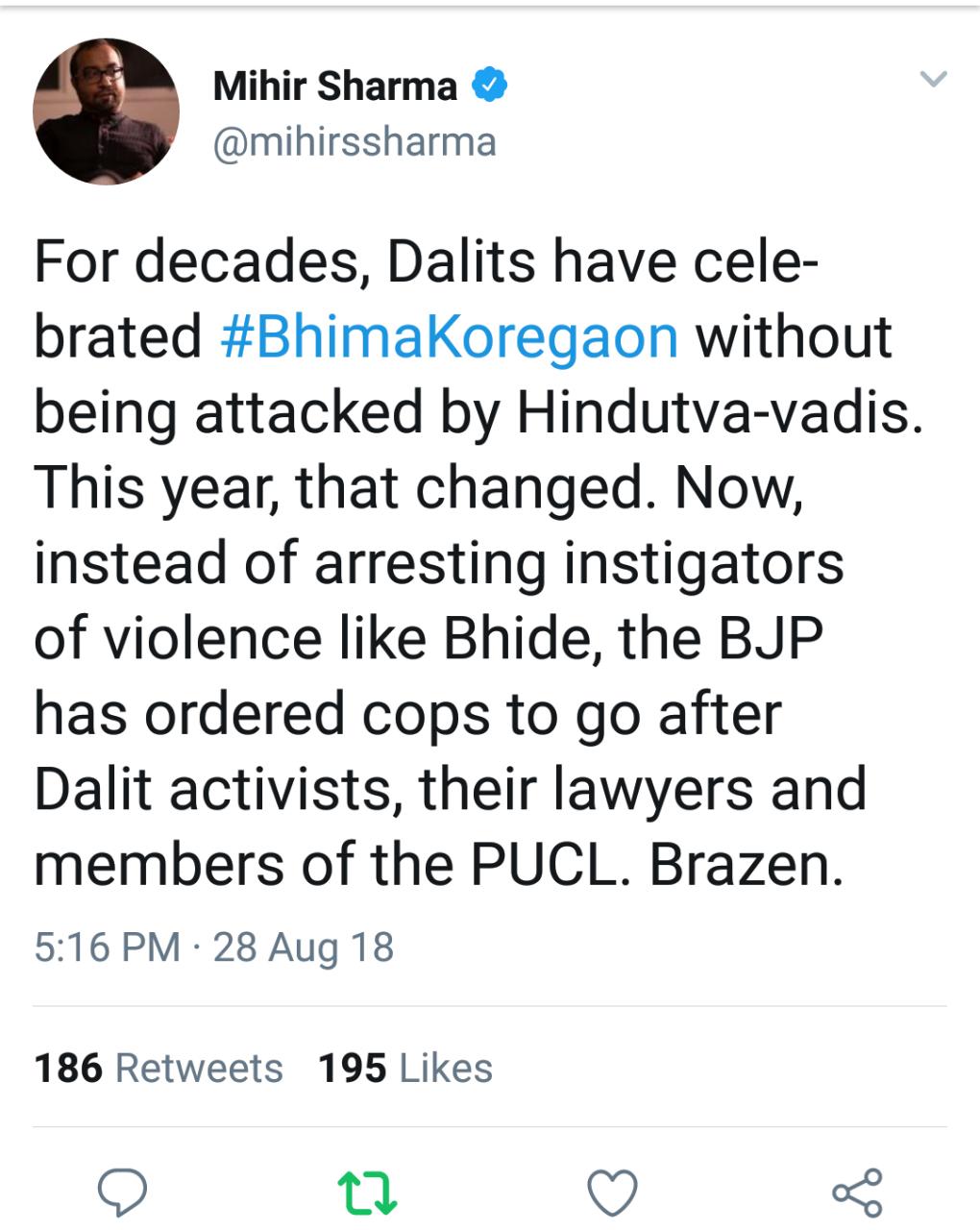 Following the Bhima Koregaon agitation last year,this is the latest and most recent phase in the extensive ongoing simultaneous joint police operations across different states, targeting lawyers, intellectuals, writers and political activists. The last time a similar operation was carried out on June 6, 2018, people like advocate Surendra Gadling, cultural activist Sudhir Dhawale, professor Shoma Sen, political activists Mahesh Rauth and Rona Wilson were picked up in a similar coordinated fashion, following raids at their homes and offices. The allegations, quite predictably, was that, the above-mentioned had been working with the Maoist movement to “break the country.”

Ever since, the government and media houses close to the BJP have been trying to spin a false narrative of a Maoist conspiracy that is allegedly trying to destabilize the nation’s political structure. Terms like “urban naxals” were invented meanwhile, in addition to catchphrases like the “Tukde Tukde Gang”, as the compromised big media went into a frenzy whipping up public rage against people who have essentially been consistently working and talking and writing about anti-people policies of the Government. A joint statement issued by prominent individuals like Shabnam Hashmi, Paranjoy Guha Thakurta, Neha Dixit (Journalist), Jignesh Mevani (MLA Vadgam, Gujarat), Nakul Singh Sawhney (Documentary Filmmaker), Teesta Setalvad (Journalist and Social Activist) and many others, claims that “We have learnt that the Delhi Police, after having arrested Sudha Bharadwaj, waited for Republic TV to arrive before taking her to the court”. Incidentally, in a program aired on 4th July 2018, Arnab Goswami of Republic TV claimed that Bharadwaj had written a letter (identifying herself as “Comrade Advocate Sudha Bharadwaj”) to a Maoist – one “Comrade Prakash” – stating that a “Kashmir like situation” has to be created. In response, Bharadwaj had sent a legal notice to Arnab Goswami and Republic TV for their false, malicious and defamatory allegations. 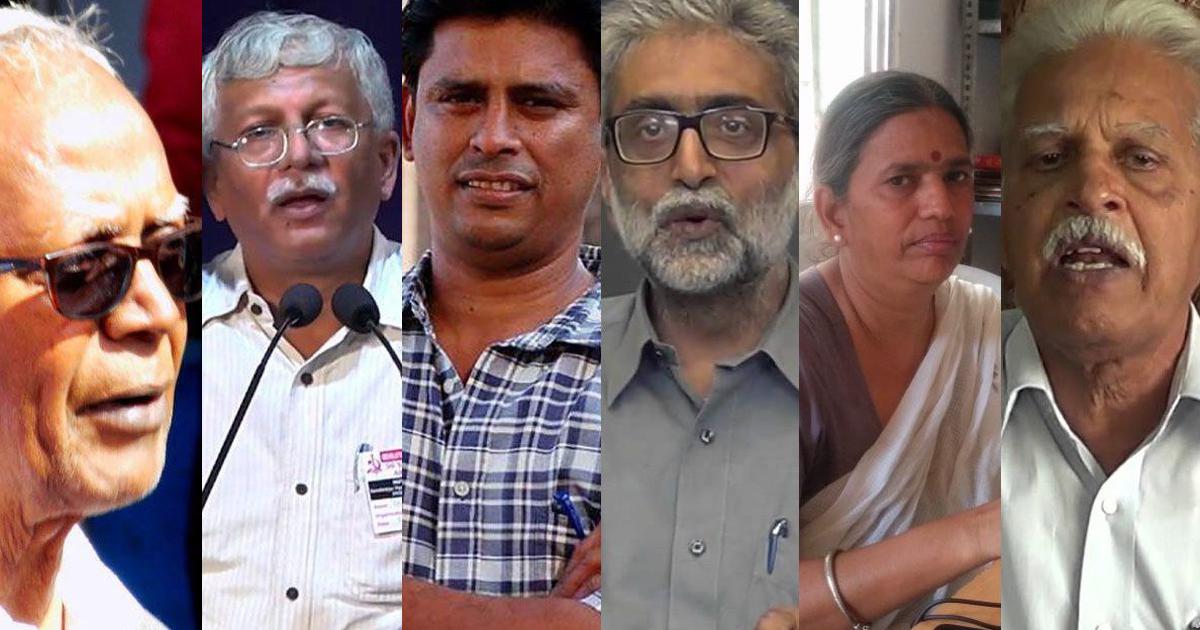 Sudha Bharadwaj has been a people’s lawyer and has worked for decades in organisations like the Chhattisgarh Mukti Morcha (workers’ organisation) and has worked as the National Secretary of People’s Union for Civil Liberties. Recently, she had been teaching at the National Law University at New Delhi. As a member of the Indian Association of People’s Lawyers, she had issued statements against the attack on judiciary by Hindu right wing lawyers in Kashmir in the context of the rape and murder case of Asifa. IAPL had also been conducting fact finding missions and issuing statements on other lawyers being targeted by the state, such as Advocate Chandrashekhar of Bhim Army and Advocate Vachinathan arrested after the Sterlite firings. She had been in the forefront of the struggle for the release of Advocate Surendra Gadling after he was arrested in June. 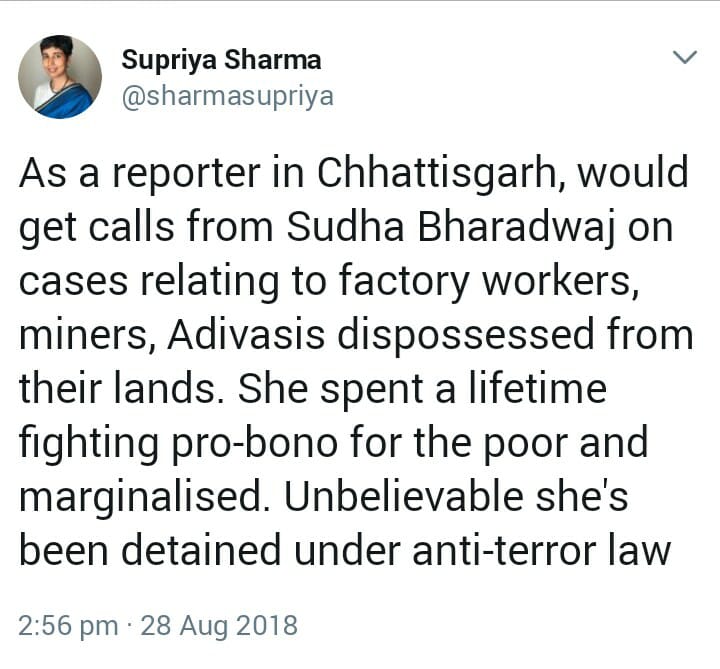 But more than anything else, Advocate Sudha Bharadwaj is known for her relentless legal support to thousands of adivasis and workers in Chhattisgarh on issues of minimum wages, forest rights, encounter killings, rapes by security forces, and so on. At 7 am today the Maharashtra police reached Sudha’s house in Badarpur. They took away her phones, her 2 laptops, her pendrives, and asked her to write down all her email, facebook, twitter account IDs and passwords. They also took her daughter’s phone and asked her to write her instagram, email and snapchat account IDs and passwords. The police also took away her personal diary, which had several empty pages, and Advocate Bharadwaj has expressed her concern of the diary being tampered with by the police in order to try planting evidence against her. 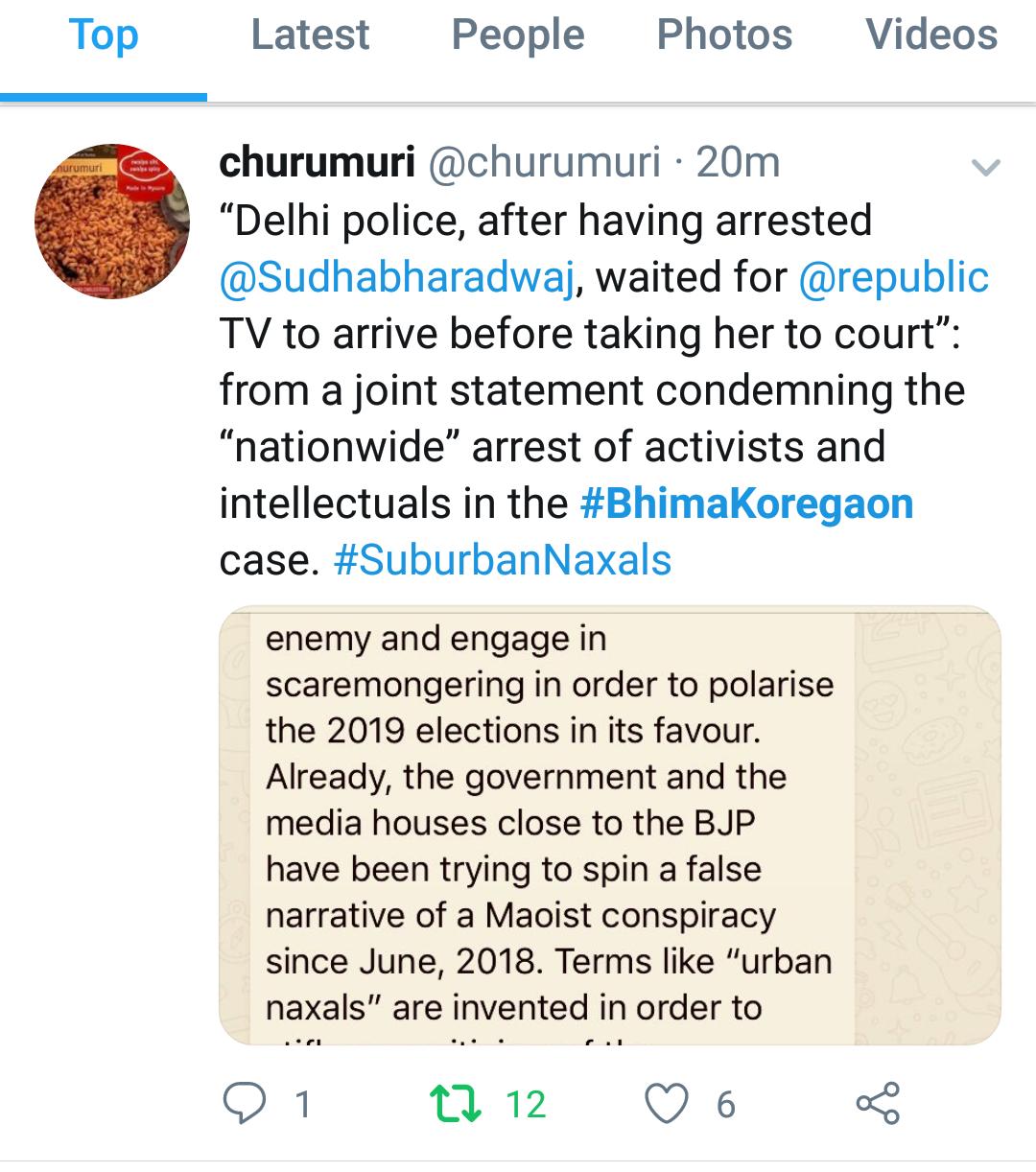 In fact the Haryana High Court passed an order today directing Sudha Bharadwaj to be kept at her house from where she was arrested at Badarpur. The local police did not wait for the order and whisked her away. Adv Bharadwaj was kept waiting for hearing at the house of CJM Faridabad. She reportedly said, while chatting energetically with the women cops stationed there, “Mera parivar bahut hi bada hai!” (I have a really big family!). According to the latest news, she has been taken back to the PS, in defiance of the High Court order. 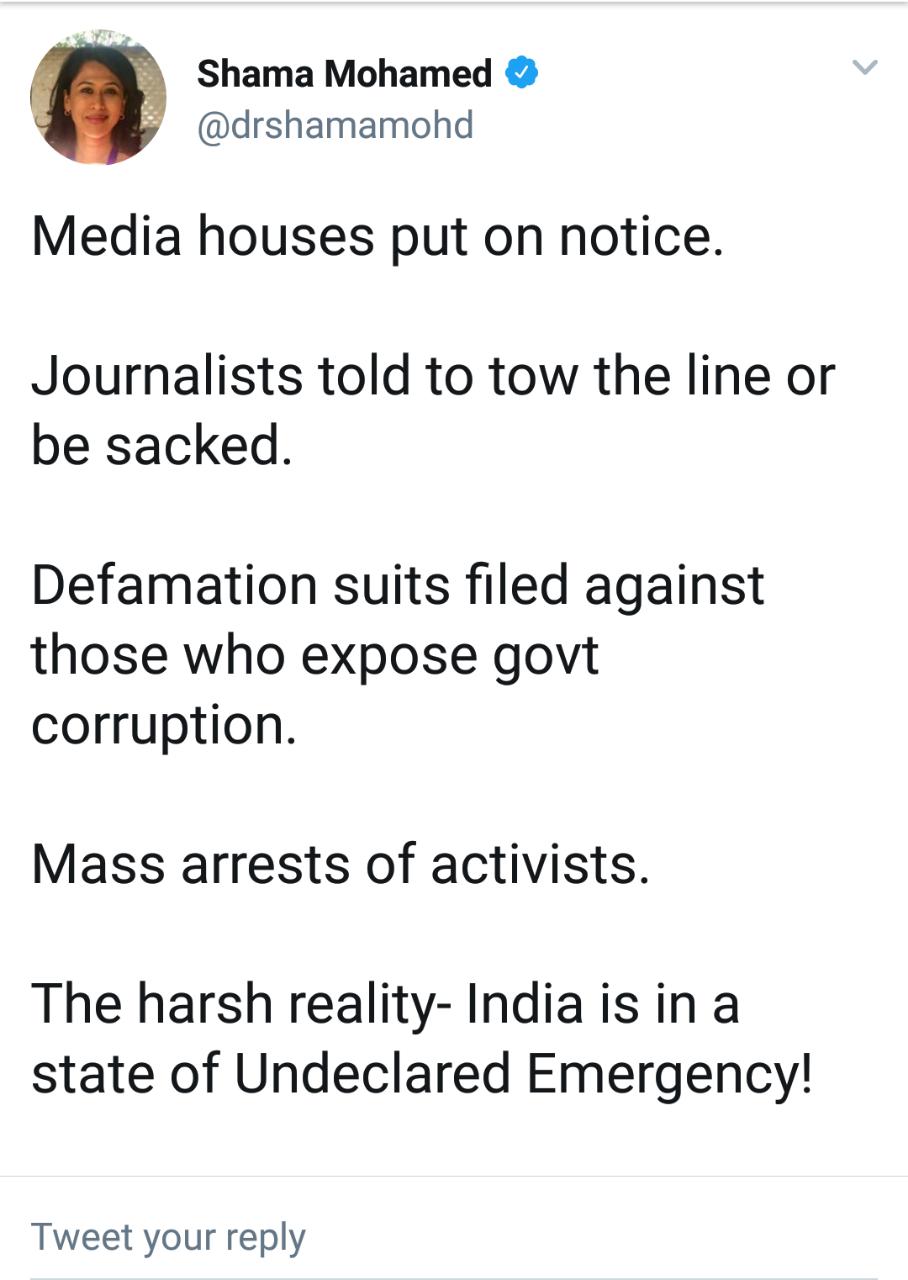 Stan Swamy is a 75-year old activist and a Jesuit priest, working on the rights of Adivasis and Moolvasis in Jharkhand. Among other issues, Stan works on displacement, corporate loot of resources, the condition of undertrials and PESA. The Bagaicha campus where Stan works, was raided by the Maharashtra and Jharkhand police around 6 am on 28 August 2018. The police confiscated his mobile, laptop, some audio cassettes, some CDs, and a press release on the Pathalgadi movement released a few weeks ago. The irony is that Stan Swamy was in no way connected with the Bhima Koregaon Elgaar Parishad, which is being used as a context now to arrest anyone and everyone who is engaged with democratic movements.

Gautam Navlakha is a Delhi-based senior democratic rights activist who has been working on several rights issues such as those of the Kashmiris, or people in Bastar, as a member of the People’s Union of Democratic Rights. The Delhi HC however stayed Navlakha’s transfer to Pune till tomorrow, in respone to a Habeus Corpus petition that was filed. The court observed that it was not possible to make out the case against Navlakha based on the documents submitted by the police. 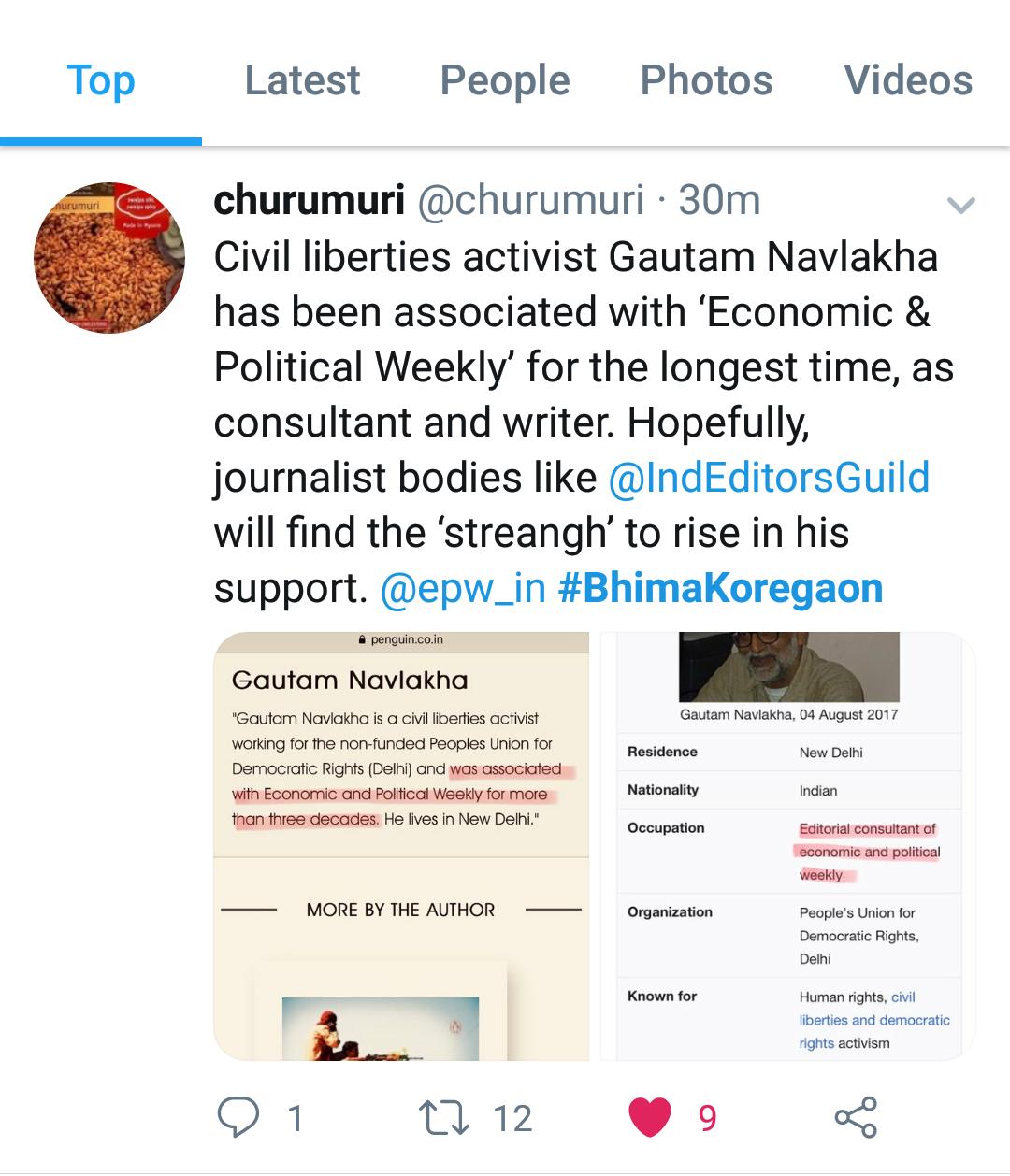 Advocate Arun Ferreira and Vernon Gonsalves have also been prominent activists working on various democratic issues. They have especially been active in the democratic struggle on the rights and release of the political prisoners. You can read their article on the current criminal justice system published earlier in GroundXero here. Arun and Vernon were both arrested earlier on false charges of having Maoist affiliations. Arun has also been active in the Indian Association of People’s Lawyers.

Varavara Rao and Kranti Tekula (also a journalist) are Hyderabad-based activists and writers, working with various left and democratic movements, including movements against privatization of education, and Hindu fascism. Though Varavara Rao has never concealed his ideological sympathies with Maoism, his arrest in such illegal fashion stands in clear contradiction with the recent Kerala HC ruling which states that “police cannot detain a person merely because he is a Maoist, unless police form a reasonable opinion that his activities are unlawful”. 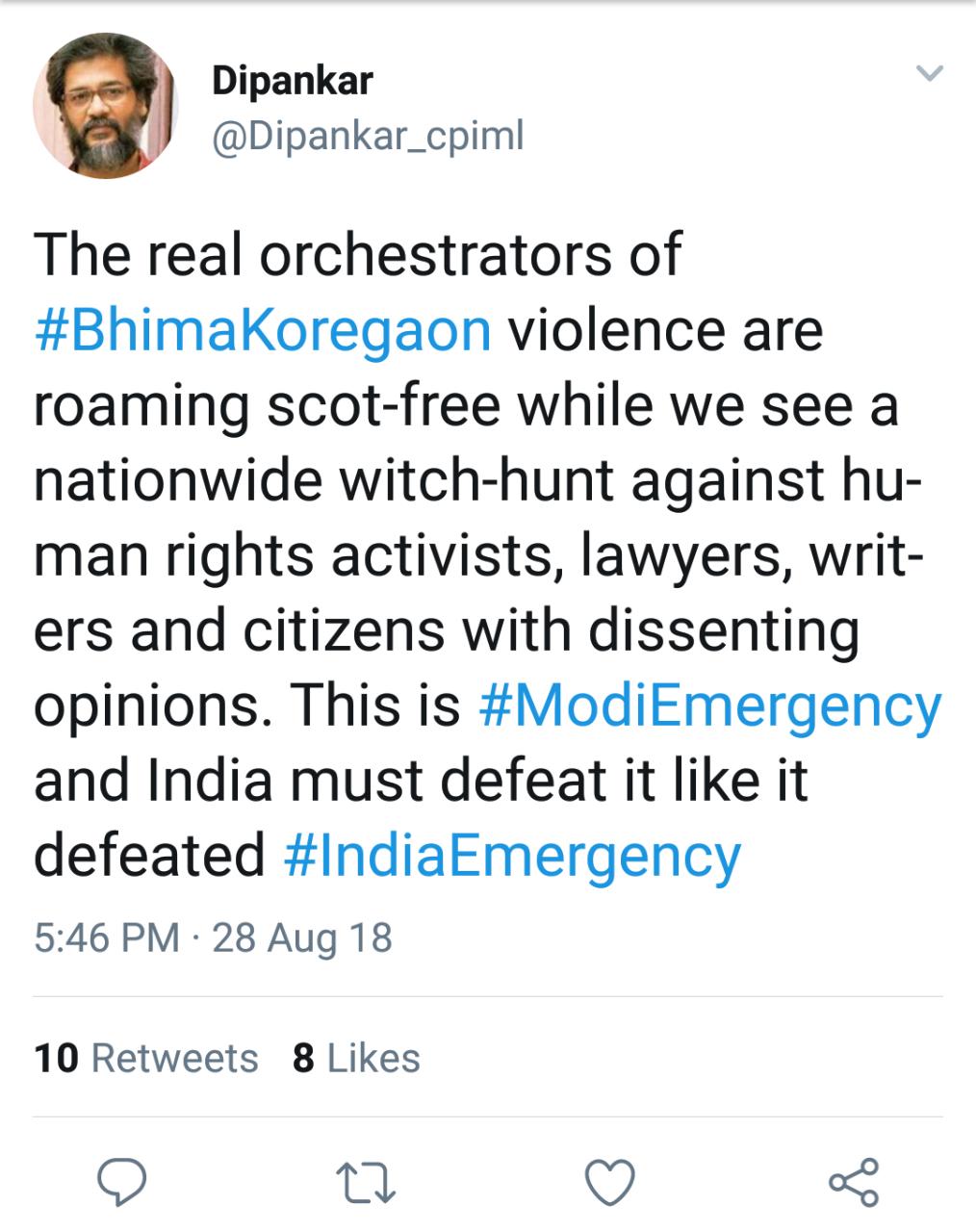 This latest spate of unrestrained and illegal police action, backed up by reality show channels masquerading as “media”, under the direct directions of the Central and various State Governments, has sent powerful shocks through the civil society across the country. Throughout the day, journalists, political leaders from the opposition, activists, writers and common people have taken to social media, voicing condemnations of the way the Government is brazenly stifling democratic voices through sheer muscle power, while the actual accused in the Bhima Koregaon riot – Hindu right wing leaders such as Milind Ekbote and Sambhaji Bhide — are roaming around openly, and continuing on their hateful political agenda with and through open state support.

Some have also pointed out, these arrests are in order to divert attention from the gravity of the Sanatan Sanstha conspiracy to carry out serial bomb attacks on Eid and upcoming Ganesh Chaturthi in Mumbai. The CBI, had, only a few days back, linked the murders of Lankesh, and rationalist Narendra Dabholkar, to the same Sanatan Sanstha. Sharad Kalaskar, who happens to be one of the chief operatives of the organization, and has been the alleged shooter in the Dabholkar murder case, was among the five persons recently arrested by the Maharashtra Anti-Terrorism Squad in connection with the seizure of crude bombs and firearms from various parts of the state. 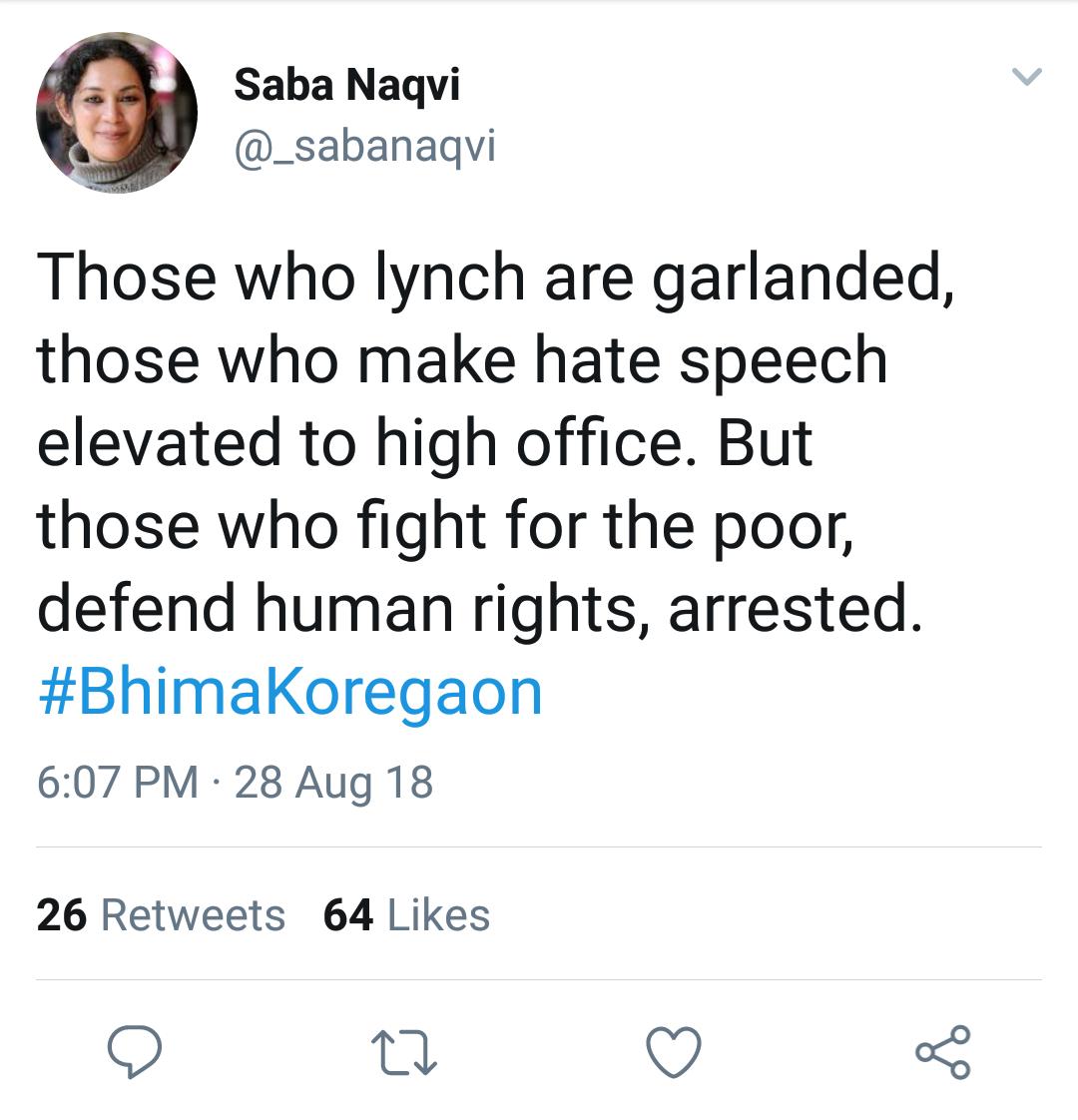 Many have been comparing this post-2018 gear shift by the Indian Government towards becoming an out and out police state, to the Emergency years of the 70s. Clearly the ruling powers are jittery about the upcoming polls of 2019 and the continuing destruction of the country’s economy, agriculture, employment generation, etc., and the relentless protests and agitations by the people against it’s disastrous policies. Going by the indications so far, such brutalities on people at large, and particularly those who speak up against the anti-people policies of the government, will continue, especially since now that the ‘wave’ of 2014 has clearly died.

The biggest worry however is that, it is not just a question of an election. This is how democracies have always rolled out the red carpet to dictatorships across the world. Let us not forget, that Adolf Hitler had been a democratically elected leader before refashioning himself as one of the most dreaded dictators in history.