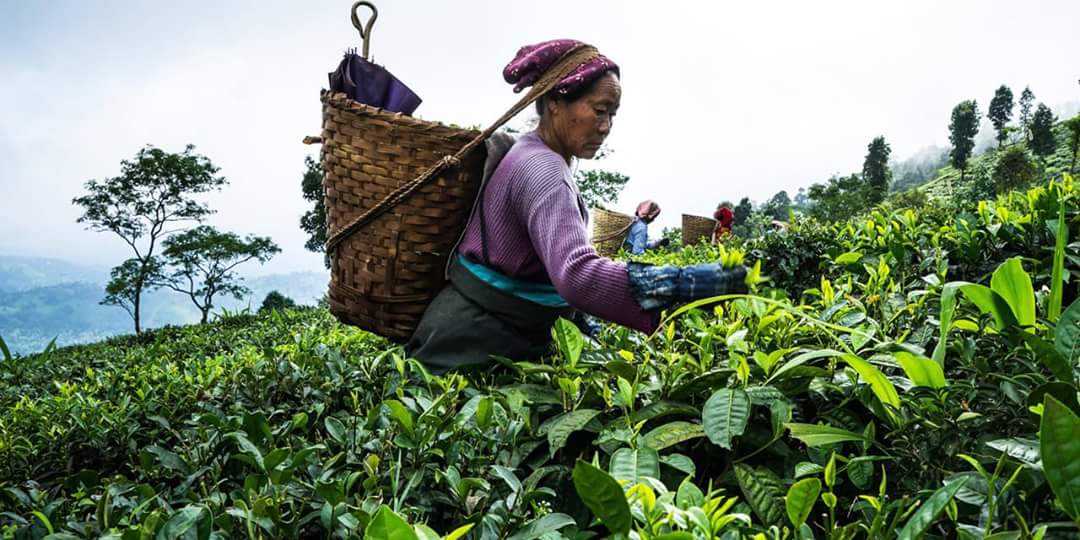 Lakhs of tea workers in Darjeeling Hills-Terai-Dooars in North Bengal are on strike for the second consecutive day. The workers organisations have rejected the ₹172 per day wage unilaterally proposed by the West Bengal government on 6 August, in a sector which makes the highest of profits. Rupam Deb recounts the history of minimum wage for tea workers and the struggle around it.

Darjeeling, Dooars and Tarai regions in North Bengal produce one of the finest and most sought after tea in international market. Such is the demand for Darjeeling tea across the globe (Iran, Japan, UK, Russia, UAE, etc) that last year, the finest quality Darjeeling was sold at ₹ 1.12 lakh per kg. Darjeeling tea has its own Geographical Indication (GI) indicating the quality, reputation and unique characteristics of tea produced in this region. But the workers who work day and night to produce these most expensive tea leaves are forced to live a life of abject poverty and chronic deprivation. According to unofficial estimates, nearly 1000 tea plantation workers of Dooars and Tarai region have died due to starvation and malnutrition related diseases over the last two decades. They are probably the only industrial labour in India who die due to starvation.

“The State government officials walked out of the meeting after we rejected their offer of fixing the minimum daily wage for tea garden workers at ₹ 172. Even if only the daily expenditure for food is taken into consideration, the daily minimum wage should be ₹ 239”: Zia-ul-Alam, Convenor, Joint Forum of Trade Unions

Wages of tea plantation workers are jointly determined by negotiations between tea worker’s trade unions, tea plantation owners (planters) and the State government officials. The wage was ₹ 68 in 2011 and after repeated protests from workers for better wage, it was increased to ₹ 132.50 in 2017. This year, after intense pressure the government unilaterally announced a wage of ₹ 172 at a tripartite meeting on August 6, much lesser than what is considered justifiable. Ironically, this is happening when in the same state, the NREGS daily wage is ₹ 191.

After the tripartite meeting fell through, the workers struck work. The meeting was held at Uttarkanya Bhavan in Siliguri which serves as Secretariat for North Bengal. “The State government officials walked out of the meeting after we rejected their offer of fixing the minimum daily wage for tea garden workers at ₹ 172. Even if only the daily expenditure for food is taken into consideration, the daily minimum wage should be ₹ 239,” said Zia-ul-Alam, convenor of Joint Forum of Trade Unions. Many consider the Government’s offer of a wage of ₹ 172 is more a gift for the planters, than a succor for the workers. 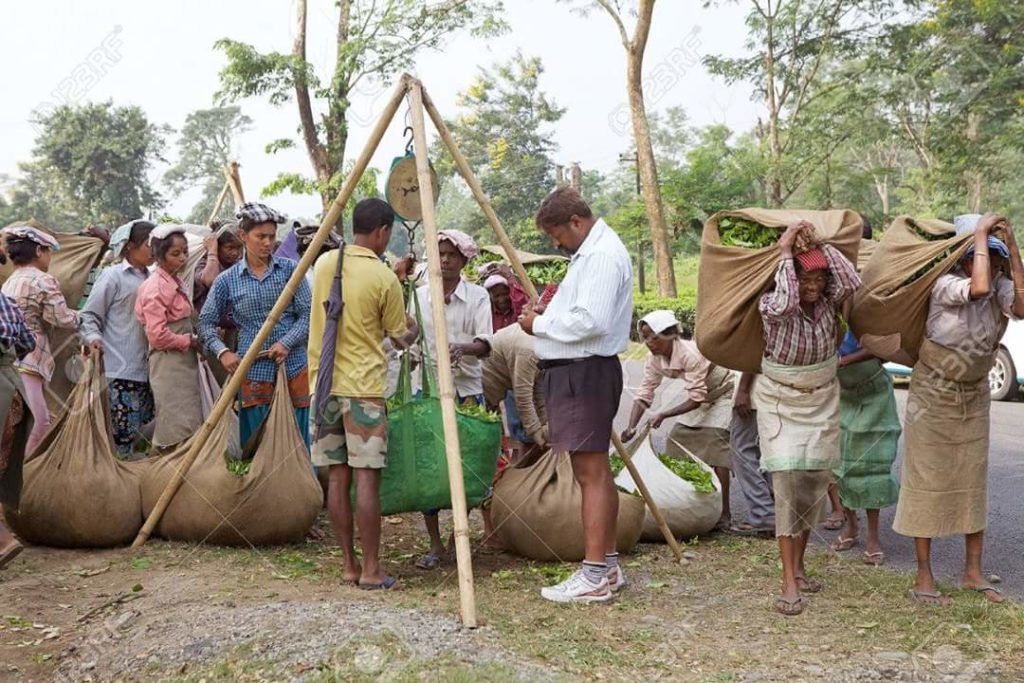 Although the quality of tea produced in states like Assam and West Bengal is better compared to that of the southern states, but the wages of the Assam and Bengal tea workers are substantially less than that of their southern colleagues. Various courts in this country, including the Supreme Court, have ruled multiple times that paying less than minimum wages is tantamount to bonded labour. And it is in order to get out of this bonded labour that the almost one million people of north Bengal who are directly or indirectly dependent on the tea gardens, are demanding minimum wages. At present the organised tea plantations of North Bengal pay daily wages at the rate of ₹ 159.

How does Minimum Wage get determined

There are three levels of wages: fair wage, living wage, and minimum wage. Minimum wage, as the name suggests, is the lowest level of wage – this is the wage that is necessary for the worker’s family to barely survive with two meals a day. Minimum wages are mainly associated with the unorganised sector. 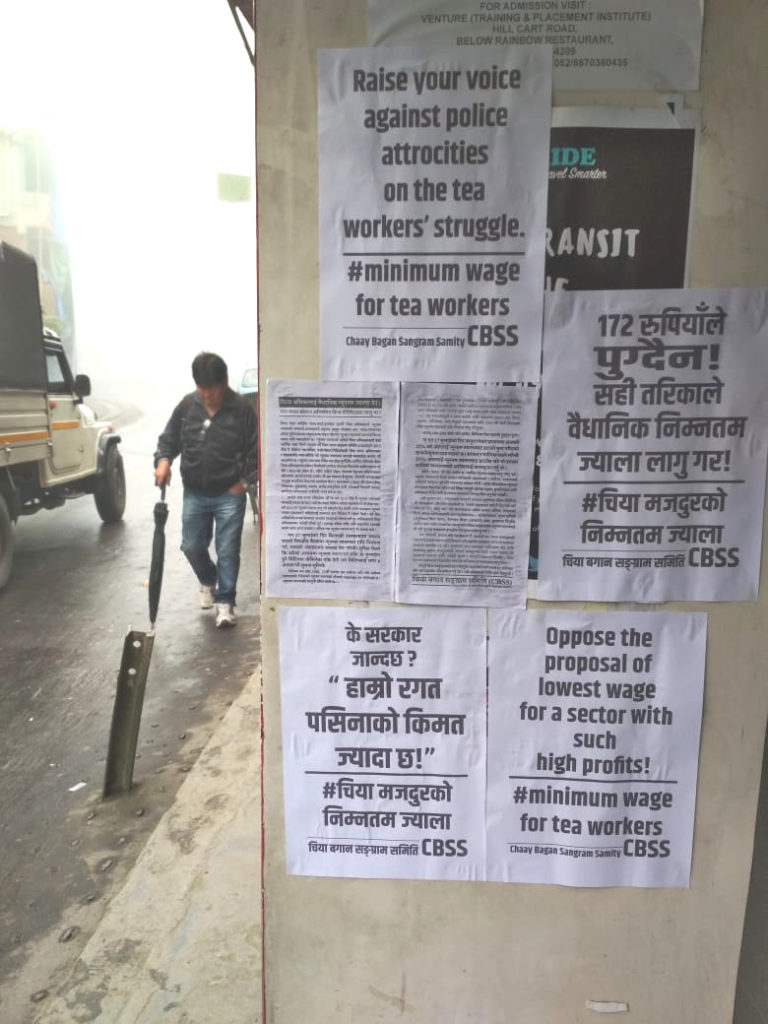 The Minimum Wages Act of this country was enacted in 1948. At the International Labour Conference of 1957, representatives of the (Central and State) Governments, Industry owners and the Central Trade Unions unanimously decided that till the day everyone in this country gets paid ‘living wages’, at least ‘minimum wages’ for the unorganised sector, and ‘fair wages’ for the organised sector must be guaranteed. This Conference also led to a unanimously approved formula for determination of minimum wage. According to this formula, an average worker’s family comprising of two adults and two children would require at least (2700 times 3 =) 8100 calories of food intake. This is based on nutritionist Dr. Wallace Aykroyd’s list of nutrition requirements for an average working Indian. The total amount of clothing required for the family annually had been fixed at 72 yards. House Rent allowance was fixed at the minimum rent fixed by the Government for the lower-income group under the Subsidized Industrial Housing Scheme. 20% of the total wage was to be for fuel and lighting expenses. In 1991, a Supreme Court ruling further expanded this formula, now allocating 25% of the total wage for health expenses and the expenditure for children’s education. According to the Supreme Court, this amount thus fixed is the “irreducible minimum” – no wage lesser than this would be legal, and the question of whether the owner is capable of paying this amount of wage is irrelevant.

The Government constituted the ‘Wage Board’ in 1960 to determine wages for the tea workers. This Board took 5 years and 6 months to submit it’s recommendations. The Board considered family of 3 units (2 adults plus 2 children, each counting as half unit) for the purposes of wage determination. To this the owners objected claiming that in the case of tea gardens since both the adults work, therefore the count for each worker should be 1.5 units instead of 3. Shamefully enough, the Government and also the Trade Unions accepted this. Those days the wage for the male worker was 1.98 paisa, 1.84 paisa for the female worker, and 1.07 paisa for the child. Because of the agreement that was reached, these numbers increased for the adults by 13 paisa and for the child by 7 paisa, in January 1966. Six months later the wages further increased by 2 paisa for the adults and 1 paisa for the child. The fact that both the adults in a family work in the garden does not imply that each of them works half of what they otherwise would have as individuals. A couple working in the same bank or school do not get paid for ‘1.5 units’ each. This idea might sound outrageous in such situations, but the tea workers had no option to protest against this. This is because of the fact that not only did the Government shun the workers’ interests from it’s inception post independence, but so did the Trade Unions that were supposed to embody workers’ interests and rights. 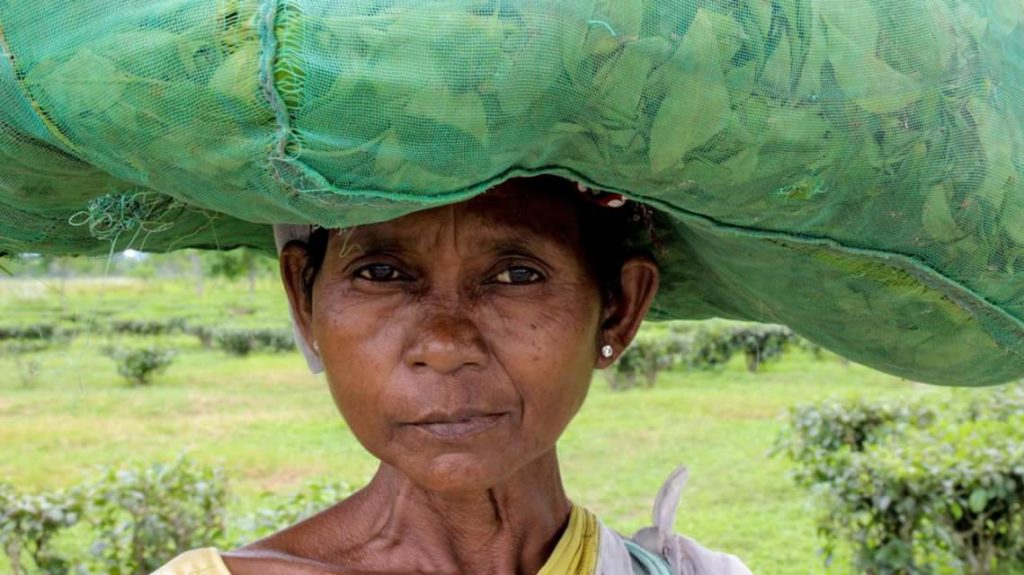 Fast forwarding to the recent past, in 2014, twenty two Trade Unions formed a Joint Forum to fight for minimum wages for the tea workers. This effort also witnessed widespread participation of the local civil society. But almost a year after launching the agitation, the trade unions abruptly agreed to an interim wage agreement. According to the agreement, the workers would be paid a wage of ₹ 132.50 on the third year from the signing of the agreement. A Minimum Wage Advisory Committee was also constituted. But the dream of minimum wages remained illusive.

Thus, in 2017 once the interim agreement expired, the demand for minimum wages made a comeback. In March 2018, the Government unilaterally announced an increase of ₹ 17, together with an announcement that the arrears for January to March 2018 would be paid to the workers as per the new rate. The question here is what happened to the arrears from March 2017 (after the expiry of the interim agreement) to December 2017? We know that this money has been pocketed by the owners. But that is not all. Wage agreements are renewed for the tea gardens every three years, according to which typically the wages are supposed to be raised on a yearly basis. However this time, though the latest agreement was signed on March 2017 that led to an increase of ₹ 17, right now we have reached August 2018, and the workers haven’t been offered an acceptable rise in wages yet though it has been more than a year now since the last revision. During the recent Panchayat elections in the state, the ruling party tried convincing the workers that the raise in PDS allocation by 9 rupees should be considered in effect a wage raise, apparently amounting to the current wage being effectively (150+9=) ₹ 159.

PM Narendra Modi at a public meeting at Birpara region of Dooars roared, “You grow tea, and I used to sell tea, so I understand your problems”. BJP won from Birpara, the tea workers kept breaking their backs plucking leaves, but Mr. Modi did not keep any of his promises.

Though the fight put up by the Joint Forum in the present context is a step forward, there are still several issues. For instance, the current leadership of the Joint Forum, faced with the question of why is it that workers were not paid minimum wages during the Left Front rule, are suggesting at the plantation ‘gate meetings’ that inflation and price rise were kept in check when their parties were in power. In effect they are suggesting that the reality of the condition of minimum wages started looming over the workers’ families only post 2011 (when TMC replaced Left Front rule in Bengal). Even otherwise, during the previous Government, raises in wages had been extremely small. The 1983 wage was ₹ 9.75. The 2011 wage was ₹ 68. In 28 years, the increase in wage was thus ₹ 58.25. The current Government in fact pats it’s own back because under their rule, the increase in wages in seven years, even without considering the increase of ₹ 9 in the PDS allowance, amounts to ₹ 82. Thus in effect, the present rulers are successfully peddling anti-worker policies as in fact ‘pro-worker’, because of how low the bar has been set by the ones previously in power.

However, the reality is that apart from the Joint Forum, there is no other force in today’s struggle of the tea workers. The role of BJP’s labour wing has been equally shameful. On his campaign trip prior to the state assembly elections, PM Narendra Modi at a public meeting at Birpara region of Dooars roared, “You grow tea, and I used to sell tea, so I understand your problems”. BJP won from Birpara, the tea workers kept breaking their backs plucking leaves, but Mr. Modi did not keep any of his promises. On the contrary, though the Central Government had acquired seven of Duncans’ tea gardens in Alipurduar just before the assembly elections, it did not try to re-open any of these. As a result, the court handed over the gardens back to Duncans. A visit to any of these gardens today will reveal the same old picture – workers not being paid wages properly, and the processing factories decaying gradually into junkyards. Few of Duncans’ tea gardens are shut down even till date. Another key reason for the weakness of the tea garden Trade Unions is that although the women tea workers outnumber the men, but the leadership of these Unions is still heavily controlled by the men. Moreover, there are many in the leadership who have in reality no connection with the tea gardens.

In the midst of all this, according to a research conducted by public health expert Dr. Binayak Sen, in the tea gardens of North Bengal, 40% of the people have a body mass index (BMI) of less than 18.5 (BMI is the ratio of weight in kgs and square of the height in meters. BMI of 18.5 indicates malnutrition). Thus, according to the World Health Organisation standards, the tea gardens of West Bengal are famine-stricken regions.

The author is a freelance journalist and social activist based in Siliguri. All images are courtesy Cha Baagan Sangram Samiti.