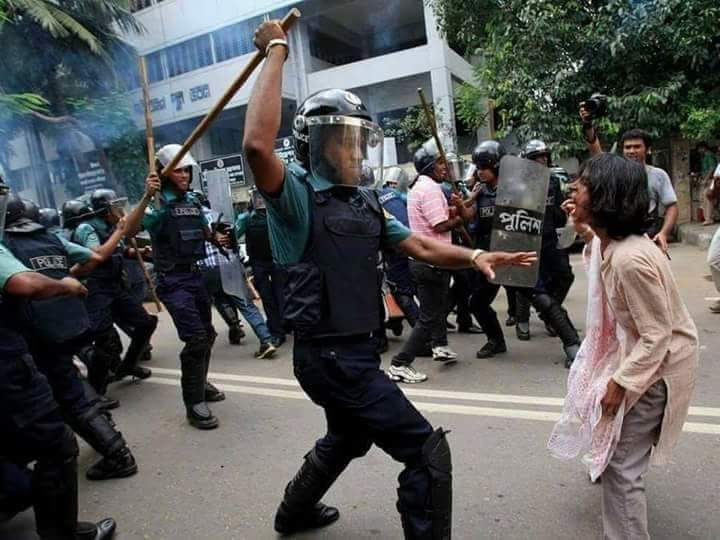 Teenagers from schools, dressed in uniforms, coming in hordes, marching down the rain-wet streets in raw rage, with handwritten slogans on placards dangling from their necks, is something unprecedented. But that is exactly what is happening in Dhaka, capital of Bangladesh. The protest started spontaneously as two students died in a tragic road accident. The inhuman and insensitive statement of a senior minister further angered the protesters. The movement spread like wildfire as massive number of students from schools, colleges and universities across the country vowed to remain on roads until their demand for safe roads are met. Shafinur Shafin writes for groundXero from Bangladesh.

Every year, over seven thousand lives are lost in Bangladesh due to reckless driving and complete disregard of traffic rules. The public transports are the worst offenders. Road Transport Authority figures show that there are only 19 lakh licensed drivers against 29 lakh registered vehicles. Those who are supposed to bring order to the roads – the traffic police – are corrupt to the core. Violation of traffic rules by bribing the police has become the order of the day. 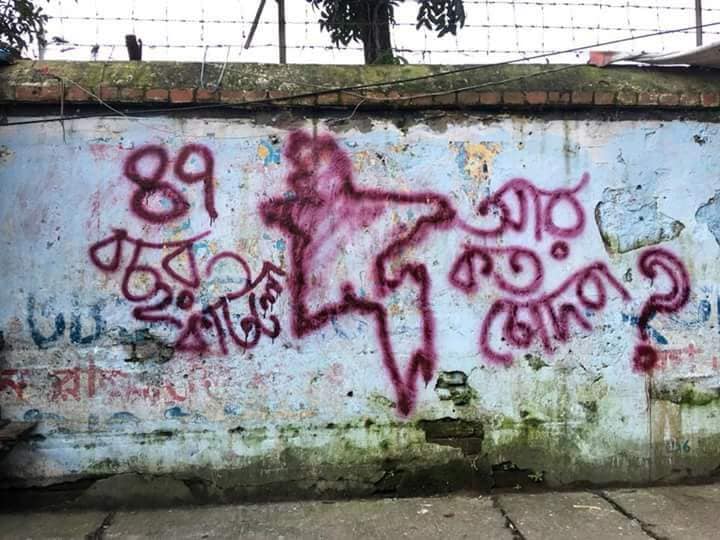 “47 years have passed. How much longer do you think you can keep fucking us?”

29th July. Airport Road, Dhaka. A bus drove over passengers waiting at the stop. Two college-students – Diya Khanam Mim and Abdul Karim – lost their lives in this accident. Immediately and spontaneously, students and other pedestrians burst into an intense protest. 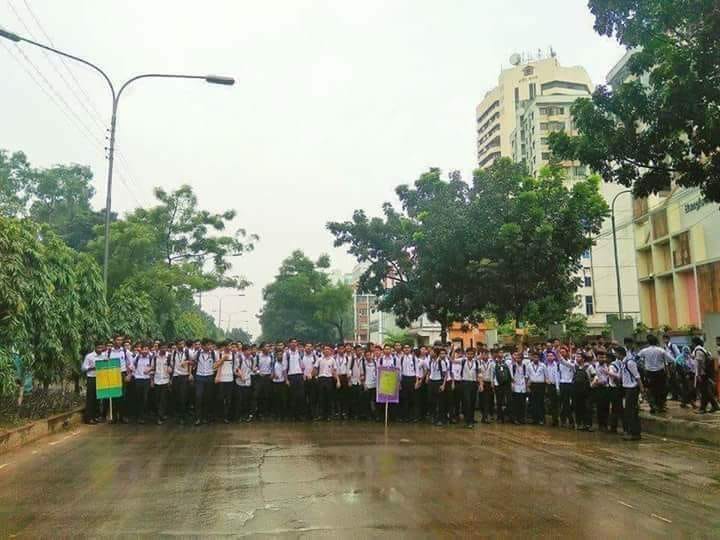 In a press conference on last Sunday, the Shipping Minister of Bangladesh, who is also in charge of road transport, compared the road accidents to another road accident that has happened in India, thus trivializing this tragic and untimely death of the two students. This further enraged the students and aggravated the protests. 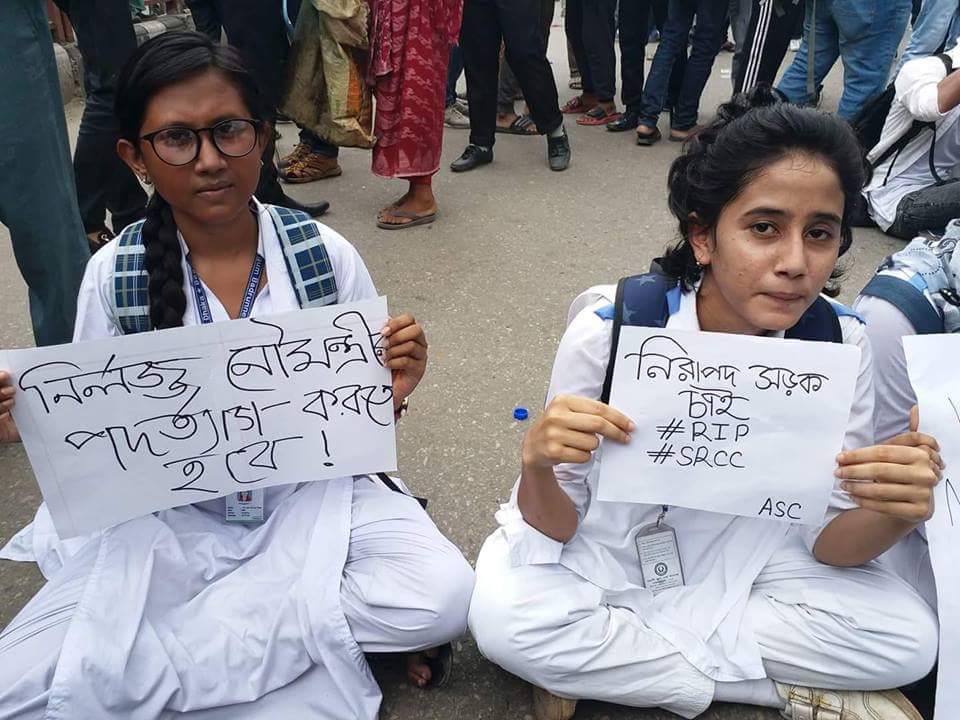 From Monday morning, students from various schools and colleges began protesting, blocking various roads in Dhaka. They stopped the vehicles on these roads and checked each and every driver’s license. 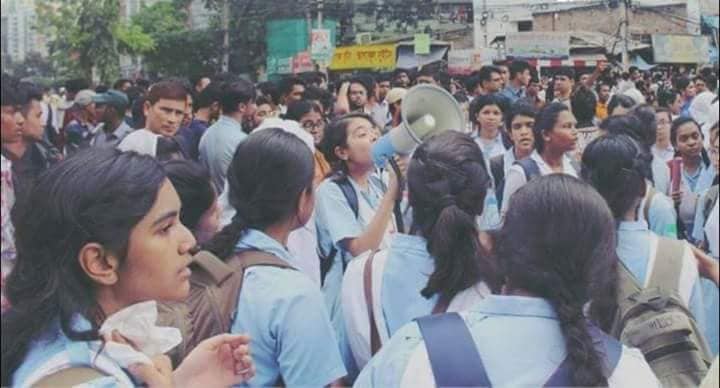 Drivers who could, not produce a valid license were barred from driving. In some cases, they had to leave the driving seat. 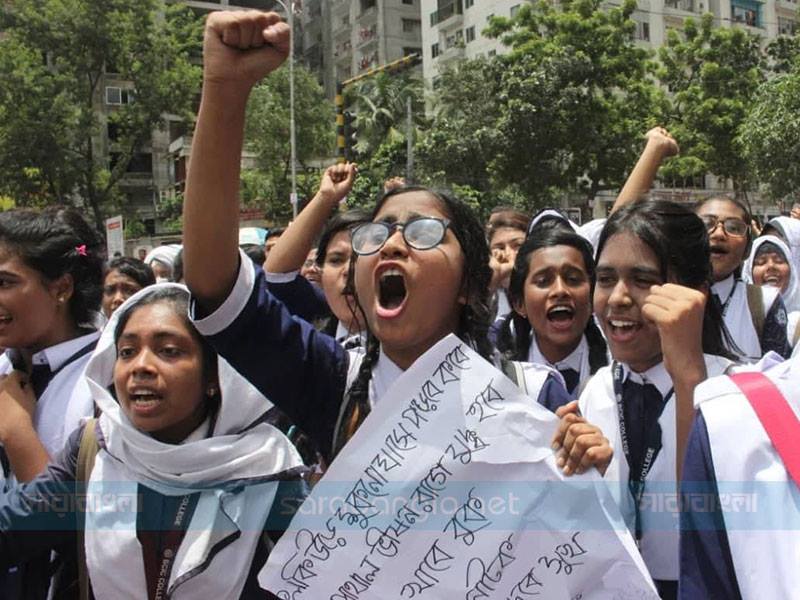 Drivers were found to be driving without license even in some of the police cars. Ministers’ cars were not spared by the students from the scrutiny either. 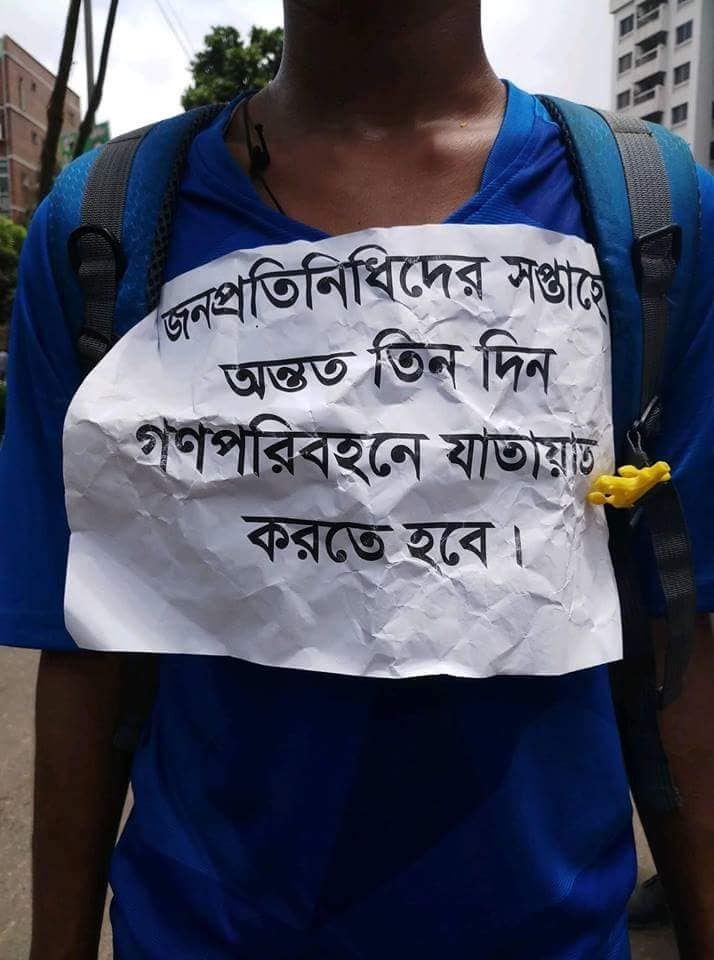 “Public representatives must use public transport at least thrice a week.”

The placards the students held often made a simple demand : “We want justice”, “We demand safe roads”. 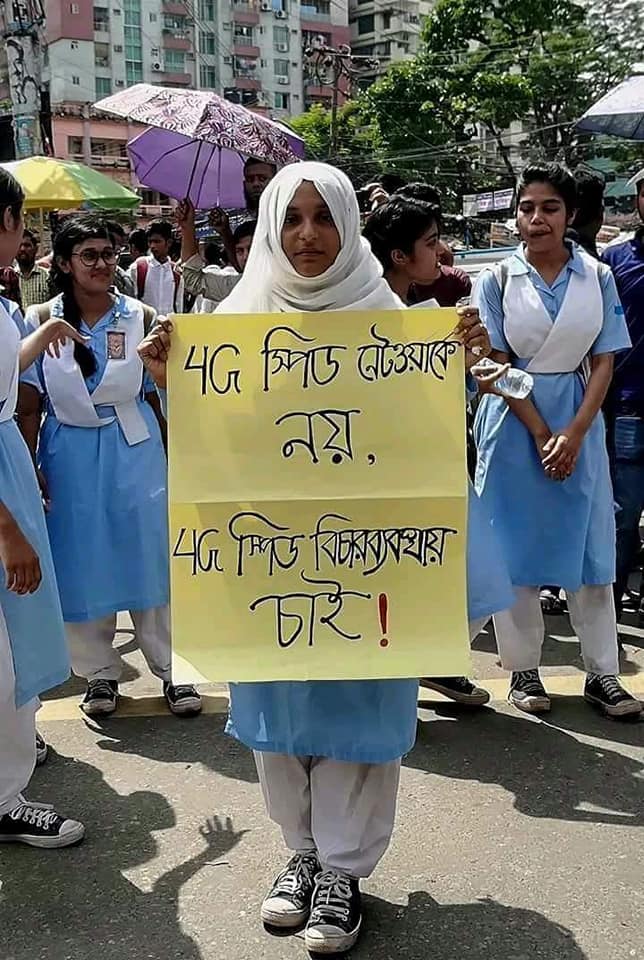 “4G speed is required not in the network but in the judiciary system!”

They demanded, they would not allow any more lives to be wasted in road accidents, that the drivers who committed the crimes must be brought under punitive measures. 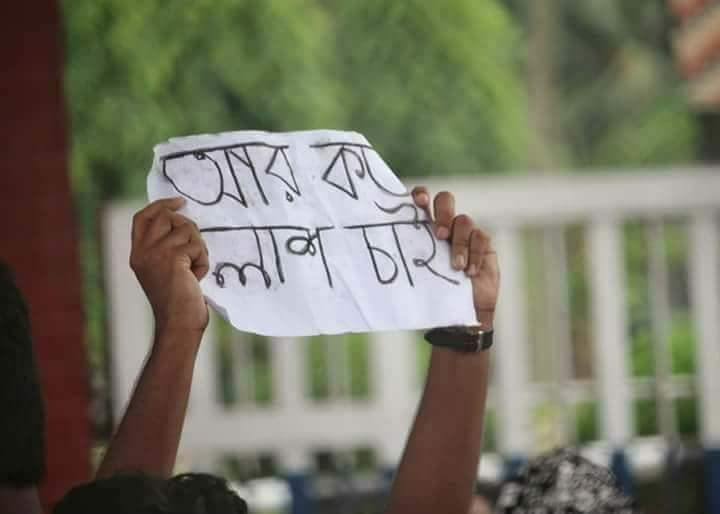 “How many more deaths would satisfy you?”

The students occupied all the major roads and the entire city came to a standstill. 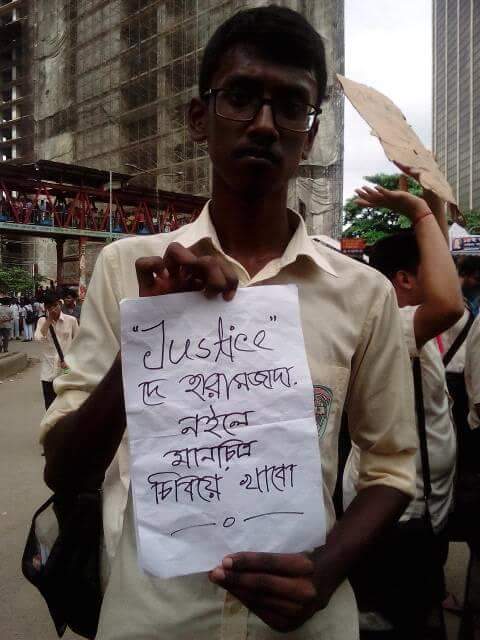 Soon, the police began to lathi-charge the protesting students, which brought out more students onto the streets. 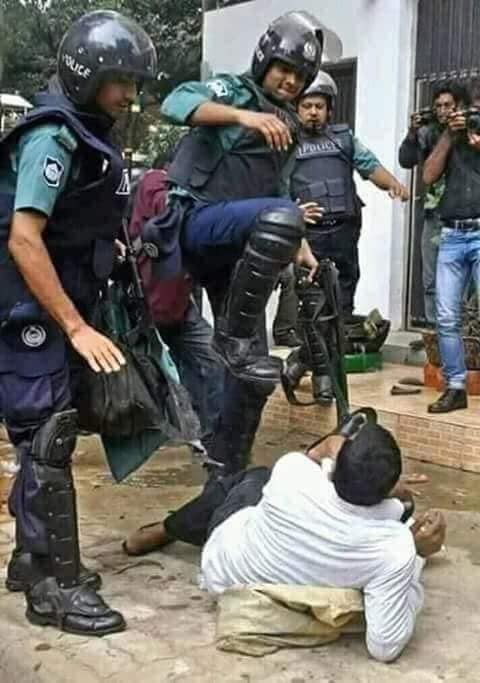 On the other end, in spite of the difficulties that the general public had to face due to the traffic congestion, they expressed their solidarity with the movement. 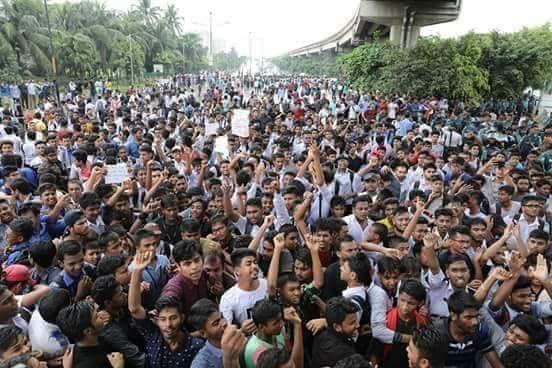 The students made sure as best as they could that patients, aged passengers or others in urgent need to travel were not stopped. 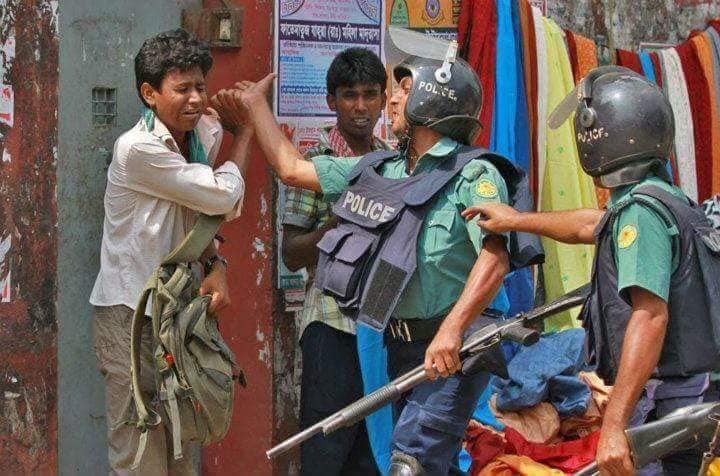 Many of the educational institutes messaged the guardians of the students instructing them to confine their children at home on Monday and Tuesday. Yet, many of them, despite knowing that the child would take part in the movement, willingly allowed them to step out and take to the streets to protest. 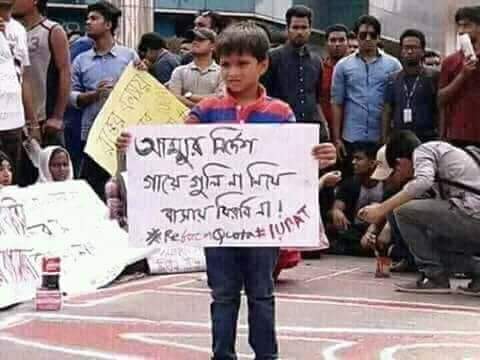 “My Amma said, don’t come back without being shot!”

Many students stated how they were threatened with TC or suspension if they joined the movement. But neither such threats, nor violent police atrocities were able to contain the protest and now it has taken the character of a mass social movement. 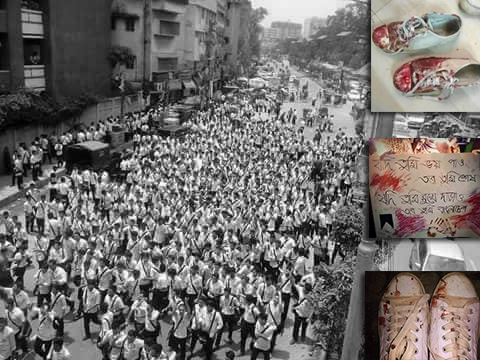 A pair of bloody little shoes. A bloody nation.

So far there is no evidence to suggest that these spontaneous protests have been organized, or even instigated by any political party or group. 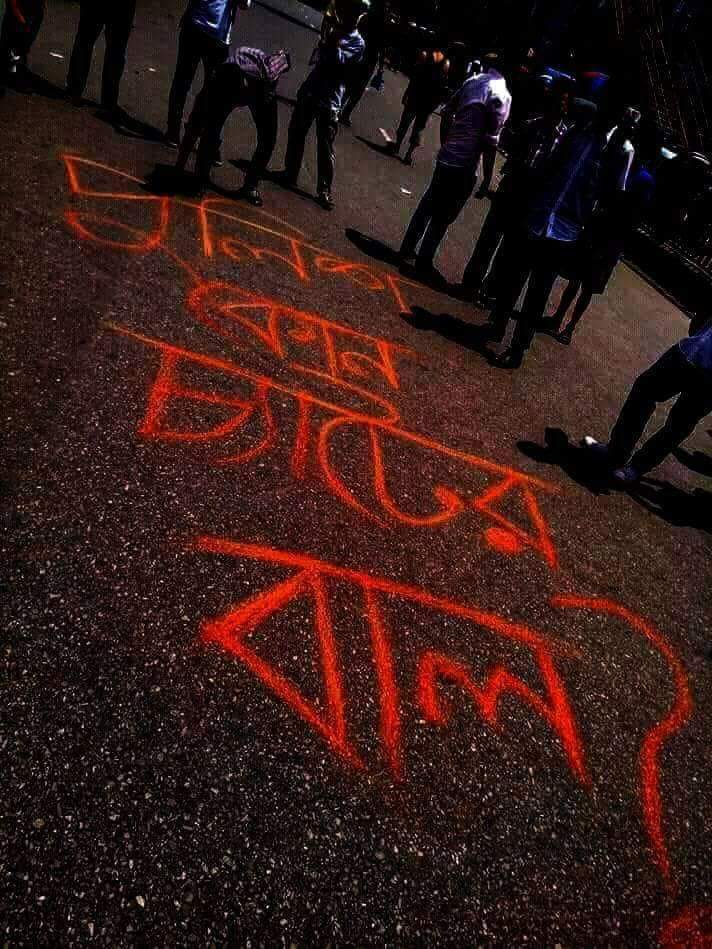 A graffiti message of dissent against the police

As news of other universities joining the protest in solidarity began to come, the Ministry of Education has declared that all educational institutions, throughout Bangladesh will be shut today.

Why Are Bangladeshi School Students Protesting?

The reasons and demands behind the protests explained under 2 minutes.

Posted by Togbog on Wednesday, 1 August 2018

Photographs – FB posts of the protesters.

The reporter is a poet and literary activist based at Chottogram.