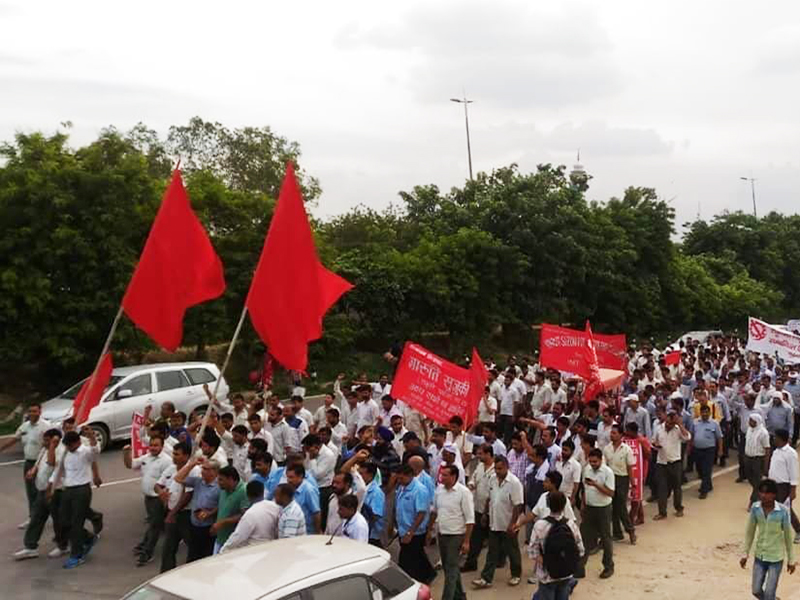 A rally was held by the Maruti Suzuki Mazdoor Sangh, demanding immediate release of the 13 Union workers serving Life Sentence. The 13 workers are in Jail for last 6 years to satisfy the ‘collective conscience’ of the capitalist class. A report by Khushiram, Ramniwas and Jitender. 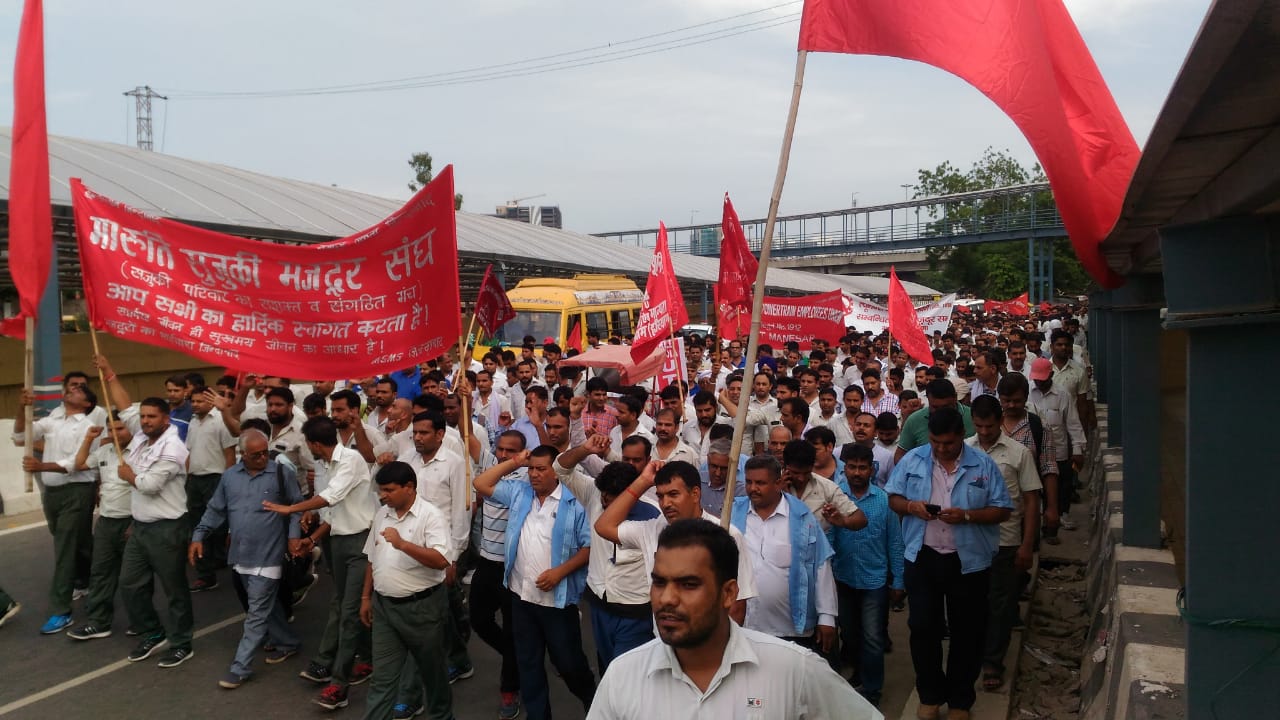 The day, 18 July, is significant in the history of Maruti workers struggle. An unfortunate incident that took place on that day six years ago (2012) at Manesar plant led to the death of a manager. This gave an opportunity to the Maruti Suzuki management to launch a crack down on the workers and the union. The Company management and the Haryana Government joined hand and put close to 150 workers behind the bars. After five years of legal battle, on 10th March 2017, the Sessions Court, Gurgaon, fully acquitted 117 workers of all charges but 31 workers were declared guilty and convicted, out of which 13 were sentenced to life-imprisonment. They still remain in jail. 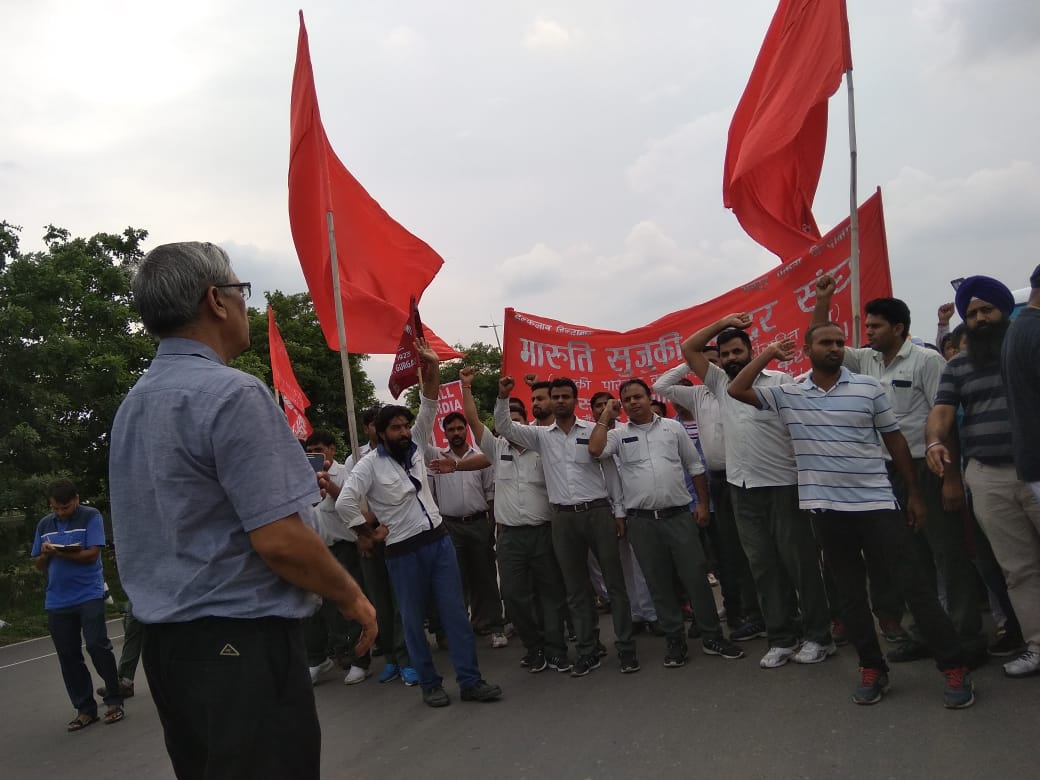 This anti-worker verdict was opposed by all the workers unions, who had demanded that the government should set up an independent judicial enquiry to probe the incident. Even after six long years, no such enquiry has taken place. The Special Investigation Team (SIT) instituted by the then Hariyana government declared 216 workers guilty. But the Maruti management sacked 546 permanent workers along with 1800 contract workers. These terminated workers are going through never-ending legal processes in the hope of getting justice. 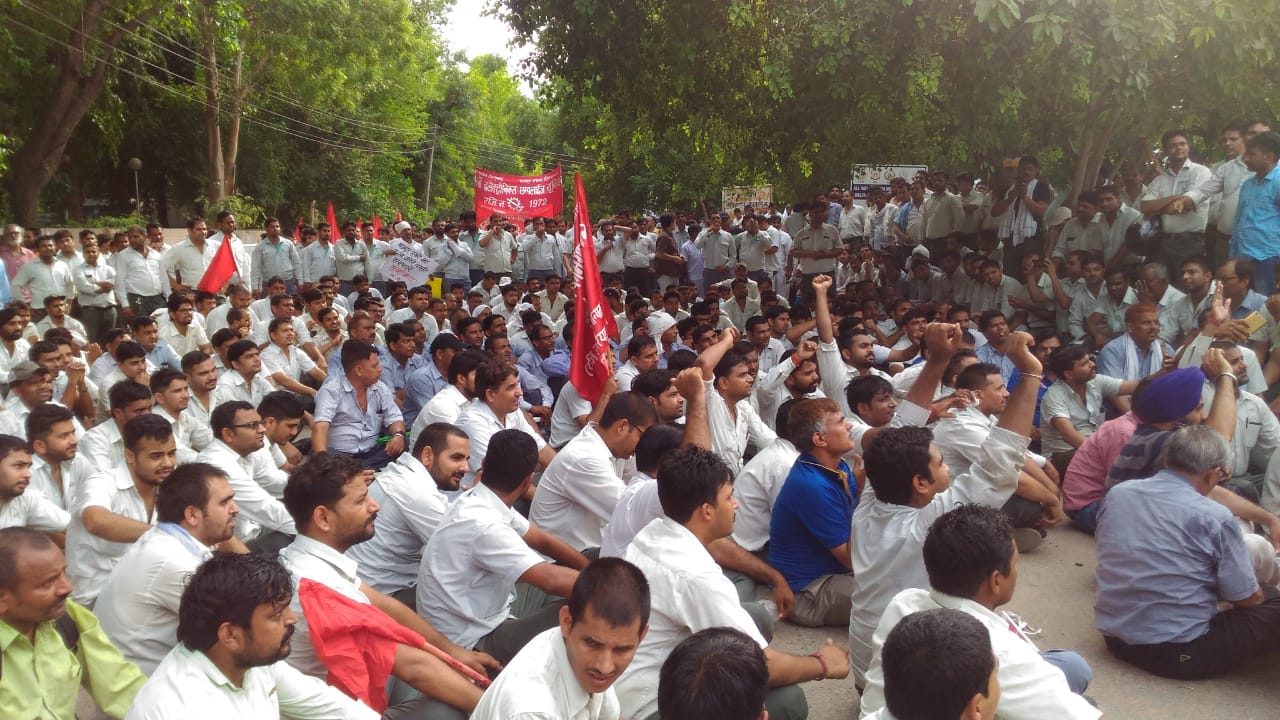 On 18th July, the workers from various industries gathered at Rajib Chowk, Gurgaon and from there they marched in a rally to the District Collector’s office. The union leaders addressed the workers and in their speeches urged the present Hariyana government to resolve this issue through dialogue and negotiation. They pointed out that while the Maruti company’s production has been continuously rising over the past six years, the condition of the workers is worsening steadily. They argued the government to immediately start dialogue with the elected workers union for the sake of maintaining industrial peace.
The terminated worker leaders from the Maruti Manesar plant stated that they are victims of the management’s conspiracy and anti-worker policies. But these anti-worker policies are not limited only to the Maruti company alone, each worker in every industry is today under management’s threat. To crush the workers struggle, the management have the liberty to shift their production to other places leaving them jobless. So today there is an urgent need for workers of all the industries to unite and fight collectively. Only then can the workers face the challenge of the management. 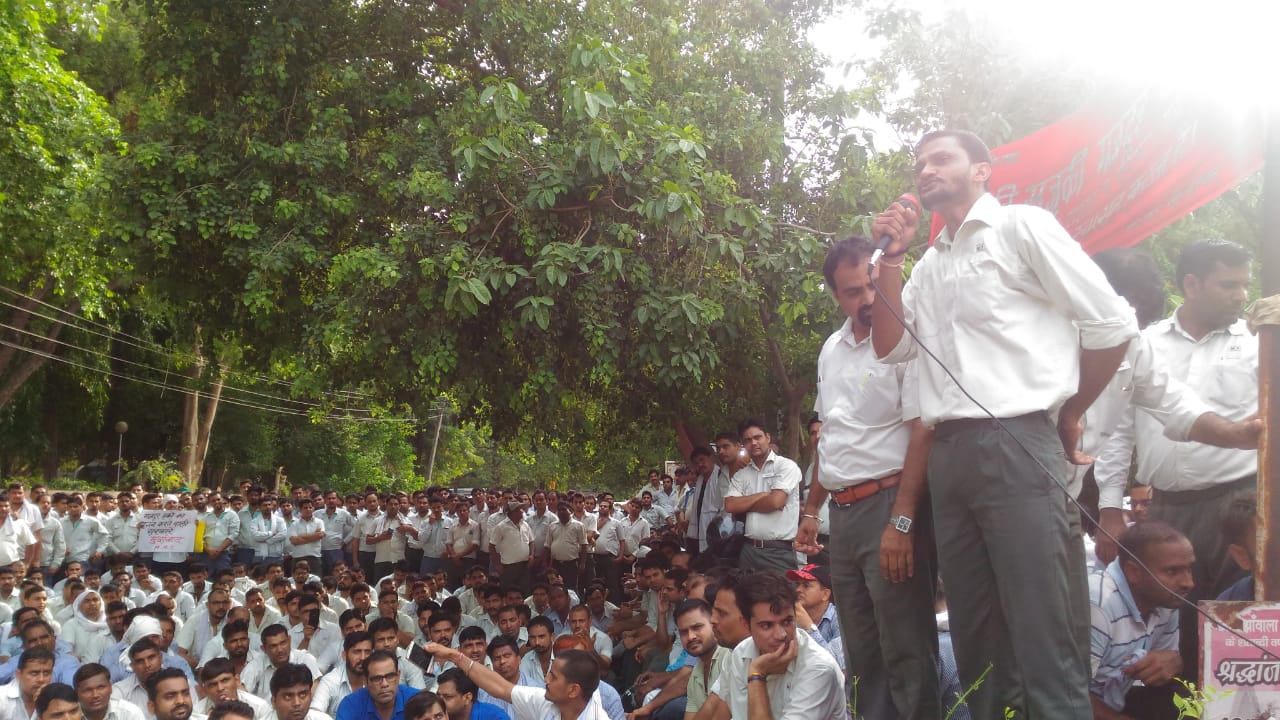 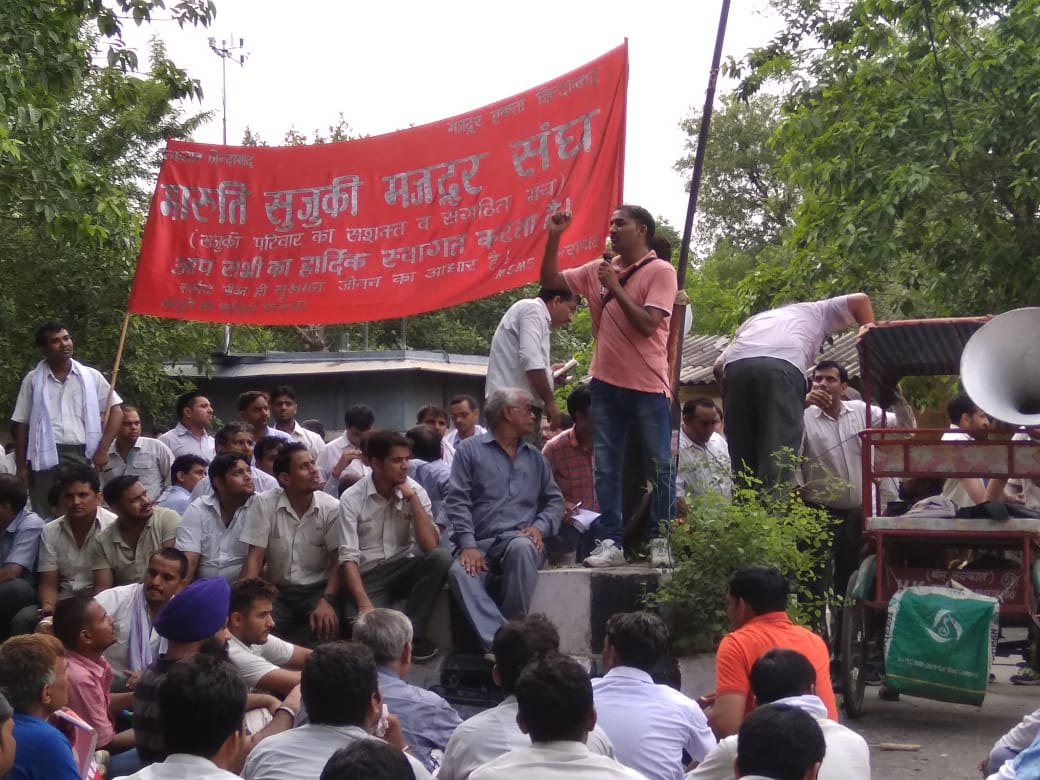 The workers representing the Maruti Provisional Committee stated that if the workers, who are still employed in the company, maintain their support to the terminated workers, the working class can pose serious challenge to the capitalists. Other than workers unions, several revolutionary organizations also participated in the ‘Sangarsh Rally’. 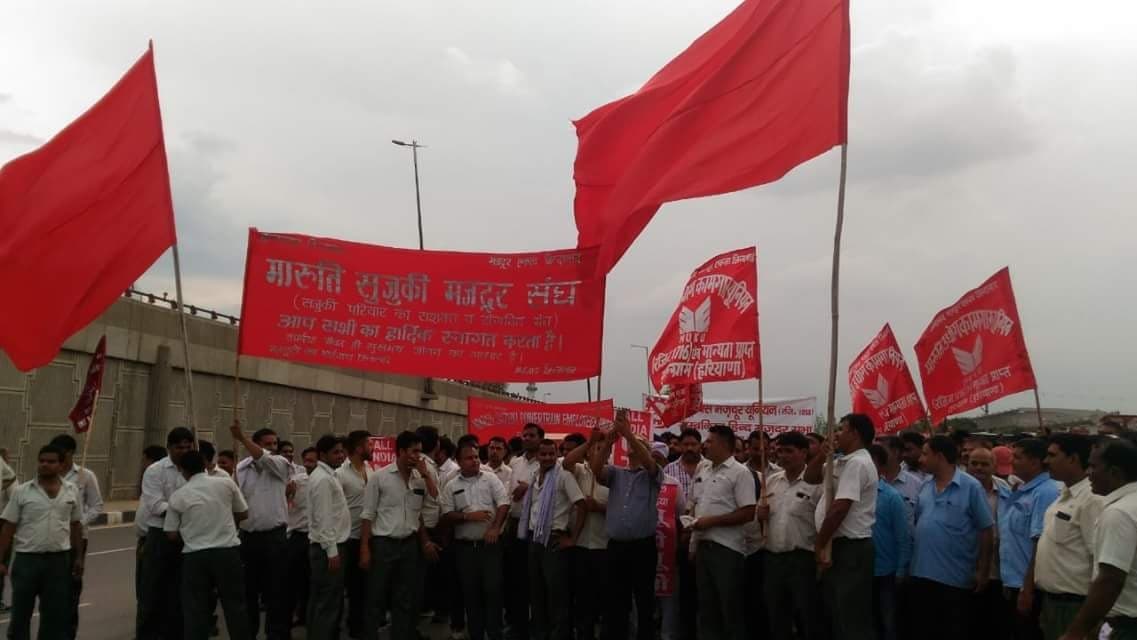 Ramniwas, Jitender and Khushiram are members of the provisional committee of Maruti Suzuki Workers Union