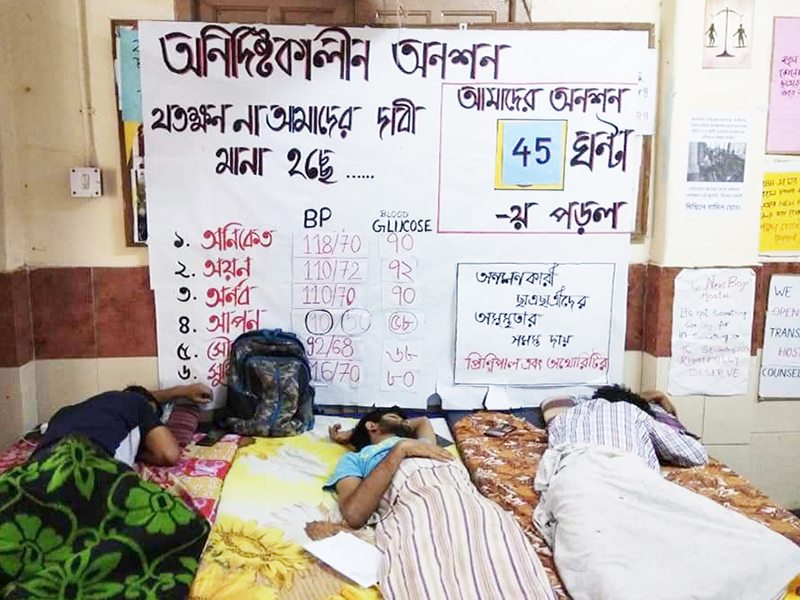 Groundxero, Kolkata: Even after four days of an indefinite hunger strike, the stalemate at Kolkata Medical College continues unabated. The students have intensified their protest and refused to withdraw their demand for a transparent hostel allotment through proper counselling. In a meeting with college authorities held on Wednesday, the students asked the Principal to immediately call for a college council meeting to discuss the issue. The Principal, on the other hand, expressed his inability to concede to the students’ demands and urged them to withdraw the hunger strike. Today, the authorities have started ‘seat booking’ for the hostel to the newcomers under heavy police protection. Meanwhile, six students of Kolkata Medical College are continuing with their indefinite hunger strike. The strike has been ongoing since Tuesday afternoon. Condition of a student on fast – Soumyadeep Roy – has deteriorated since yesterday. 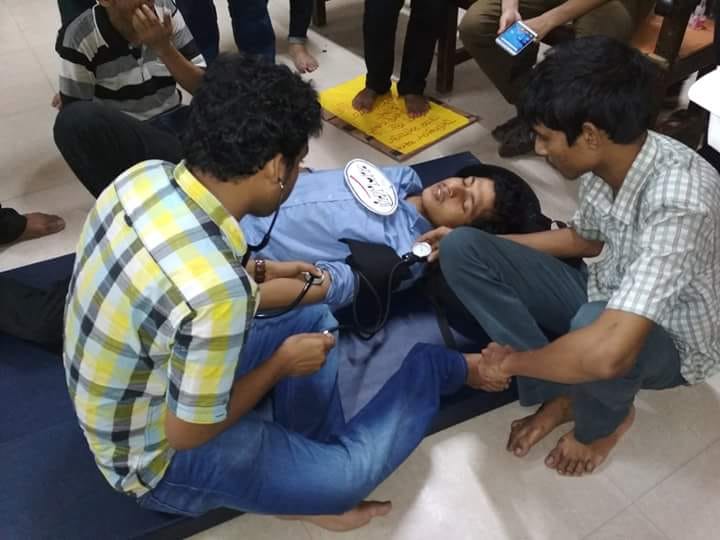 The trouble in the Medical College began when the College authorities unilaterally announced that only first year students will be allocated rooms in the newly constructed 11-storey hostel building inside the campus. The building can accommodate 650 students, but the Principal is justifying his arbitrary decision by citing MCI rules. One of the protesting students, Aniket Chatterjee, told groundxero, “MCI rule doesn’t specify new students to be kept in a separate hostel but in a block or separate floor under the supervision of a warden”. The authorities can easily do this in the 11-storey building, he argued. 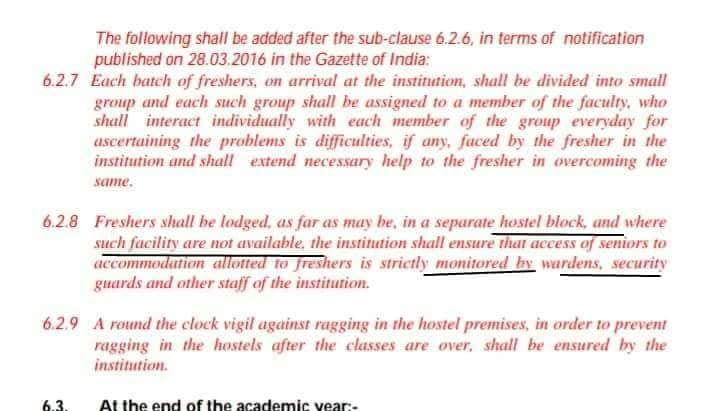 For the last three years, no counselling for hostel has taken place and just over a hundred 2nd, 3rd and 4th year students have had to live in rented ‘mess’ or as paying guests outside the campus. This is a burden, especially for students belonging to economically weaker regions, coming from far off districts. While the students pay only Rs 12 per month as rent and Rs 28 per meal in the College Hostel, they have to incur an average of seven to eight thousand rupees per month in a private mess or a PG outside the campus.

So the sudden notice that hostel rooms in the newly constructed building will only be allocated to new 1st year students and no one else created a lot of resentment and anger among the senior students who have, for years, been running from pillar to post to get hostel accommodation. To further add insult to injury, the notice also stated that Partha Pratim Mondal, a recent MBBS doctor and known TMC strongman, has been appointed as deputy-in-charge of Critical Care Unit department. He will also act as the hostel superintendent.

When the students enquired about the notice to the college Principal, he replied, “I don’t know, I will have to find out”, which means, the Principal denied knowledge about a notice issued in his own name.

This time, the students decided to protest against the authorities’ high-handedness. They brought in all their belongings including books and occupied the college common room. They gave their semester exams while occupying the floor of the common room. Deputations were sent to the Principal to call a meeting of the hostel counselling committee in order to allocate rooms to all applicants. The students further demanded that instead of a known ruling party strongman, a college Professor or HOD of a department be appointed as hostel super, as has been the norm for many years. But the Principal was adamant and refused to act on the students’ demand. 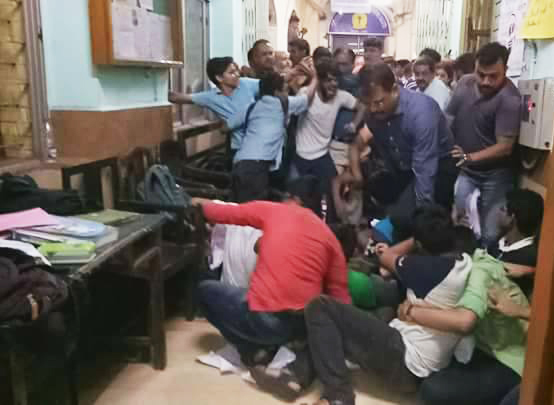 On 5th July the students decided to sit in a peaceful dharna outside the Principal’s room to press for their demands. Around 8 pm in the evening, the Principal called in police to remove the squatting students. About 100 policemen entered the hospital campus and forcefully removed the protesting students. The students alleged that the police were accompanied by TMC goons who abused and manhandled them, beat them up, and took the Principal out in a police van. A few students suffered serious injuries including fractures.

This step taken by the Principal shocked the students and the entire democratic civil society. The students alleged that the Principal was acting on the orders of the ruling party leaders and stated that they have decided to fight back. On Monday a protest rally was organised at the Medical College. Nearly 500 people participated in the rally including, but not limited to, human right activists, doctors and others. The rally submitted a memorandum of their demands to the state health minister. The students declared that if their legitimate demands were not met within 24 hours, they would sit in an indefinite fast from Tuesday. Yet, instead of calling a meeting to discuss the students’ demands, the authorities and police demolished the temporary structure built for the hunger strike. But these tricks could not deter the students. 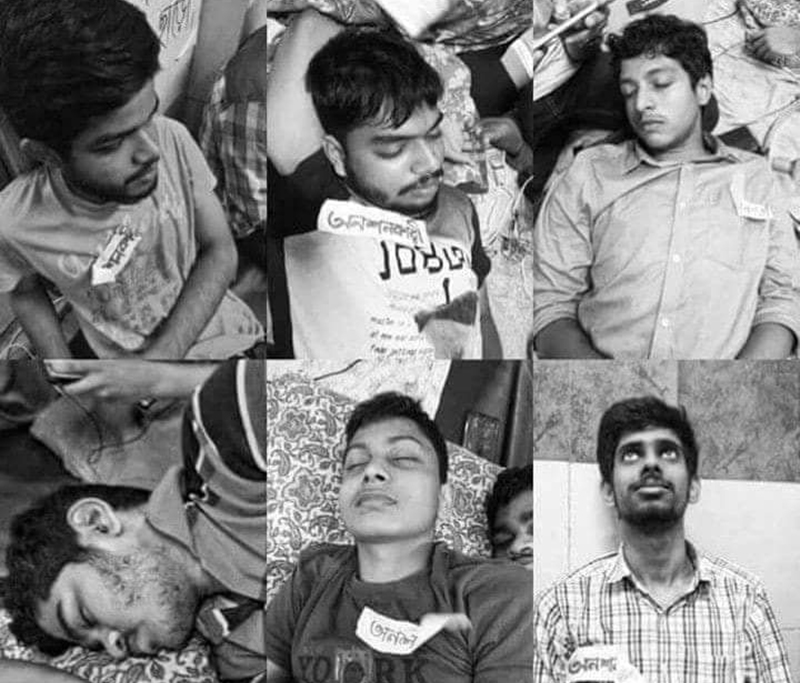 On Wednesday the Principal sent a nurse to monitor BP and packets of glucon D, requesting the students to withdraw. According to the students, the Principal had accepted the fairness of their demands, but pleaded his helplessness in accepting them. A meeting was also held in the afternoon with the students, but no solution emerged. The authorities refused to accept any demands of the students. While leaving the college, the Principal stated in front of the waiting media persons: “They are all moaists!”

Why is the Principal adamant in refusing the just and logical demand of fasting students for hostel allotment? The answer lies in the ruling TMC party’s policy of absolute control of all educational institutions in the state. All policy decisions are taken by political leaders. Sources well aware of the working of medical colleges and hospitals in the state allege that it is not the Principal but Dr Nirmal Majhi (TMC leader) who dictates to the Medical colleges. Once he even admitted a pet dog for dialysis in the state’s premiere SSKM hospital. In case of Kolkata Medical College, the TMC has no strong footing among the hostel students. So the plan is to keep the newcomers in a separate block away from the senior students, under the supervision and control of Dr. Partha Mondal, who is the right-hand man of Dr Majhi and has been appointed the new hostel super bypassing all previous norms. The allegations sound very likely to be true from what the Principal has said to the protesting students: “Come what may, I will not allow you students anywhere near the newcomers.” The senior students are clearly being denied their rights since they had refused to abide by Dr Majhi and TMC.

A convention has been convened by the students today. This time the medical students are determined to fight it out. The recent victory of the Jadavpur University students’ struggle has inspired them and they too believe that the strength of student protest will force the spineless college authorities acting as stooges of the ruling party to see reason and accept their legitimate demands. Till then the struggle is on. 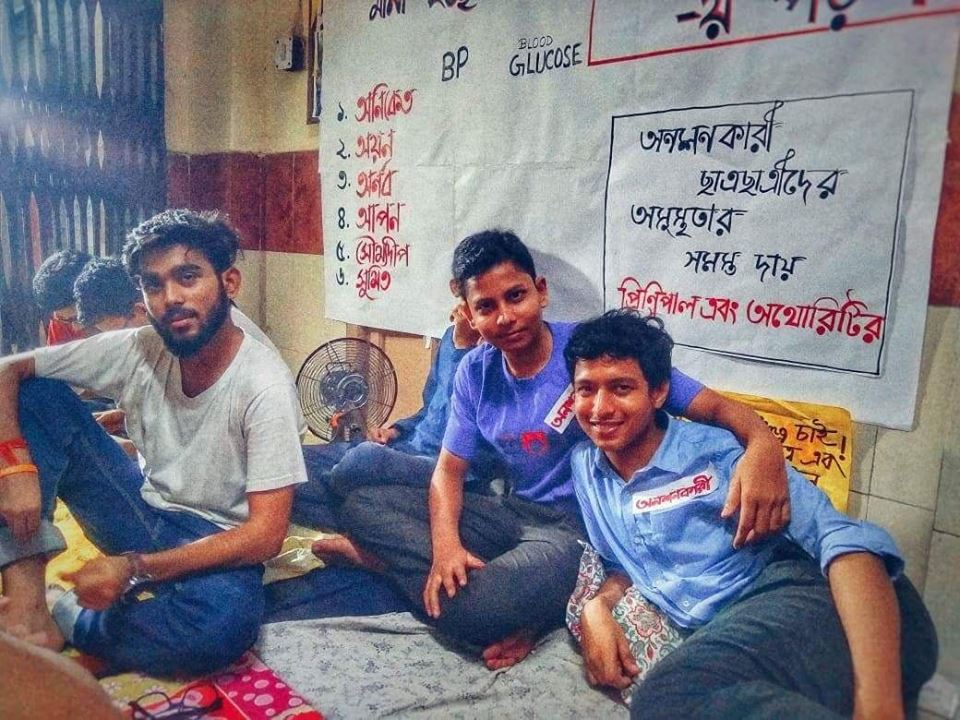