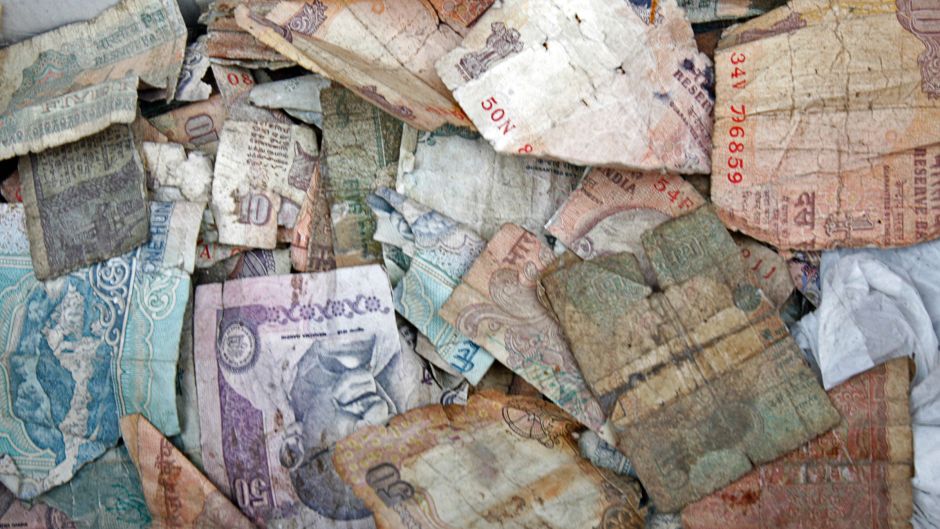 PM’s rare speech on the Economy: A scrutiny of what was said

Prime Minister Narendra Modi, while inaugurating the 3rd annual meeting of the Asian Infrastructure Investment Bank in Mumbai on June 26, gave a rare speech on the state of Indian economy in recent times. GroundXero takes this opportunity to critically examine the PM’s speech, and in the process take stock of the economic situation we are in, in the current global economic context.

Staying true to the tradition of not just his Government, but also his predecessor Mr. Manmohan Singh, Narendra Modi harped about the fabled Indian GDP growth. “(Indian economy) is the third largest in terms of purchasing power parity. In the fourth quarter of 2017, we grew at 7.7 per cent. In 2018, we are projected to grow at 7.4 per cent.”

Mr. Modi’s celebrations about the GDP growth picking up again is understandable, after the hit it took post economic cyclones such as demonetization and GST (after which it had dropped to a low of 5.6%). But let us try to re-examine what does GDP growth even mean. GDP is defined as the market value of all final goods and services within a country. Mathematically speaking, GDP = Private Consumption + Capital formation by private corporates, public sector and households (in other words, “Investment”) + Government Consumption (public salaries, purchase of goods and services by the Government, etc.) + (Exports – Imports). In economic terms, if money is used to obtain goods and services, it is ‘investment’ (while if buying a bond or a share is excluded from the GDP sum). GDP sum thus includes salaries of public servants, military expenditure, public investment expenditure, war incomes, oil spills, etc. It does not include transfer payments such as social security or unemployment benefits. According to GDP measures, the most ‘productive’ 5-year period the first world economy has seen in history, when the US GDP grew by 75%, UK GDP by 27%, and Germany’s GDP by 21%, was 1938-43 – during World War II.

On the other hand, the larger the country’s size, the bigger ought to be it’s GDP – the total number of public servants would me larger for instance, and therefore the total Government salary that they draw. In order therefore to get a sense of average GDP per person, we need to consider GDP per capita. GDP per capita is GDP divided by the size of the nation’s overall population. So in essence, it is theoretically the amount of money that each individual gets in that particular country – a much better determination of living standards as compared to GDP alone. And in these terms, India ranks 126th in the world. In 2017, India’s GDP per capita grew at 5.4%, 17th in the world, behind countries like Libya, Nepal, China, Bangladesh, Ghana and Bhutan, among others. This is a drop from the 6.14% at which it was growing in 2014 when Mr. Modi assumed office. This is also much less compared to the 8.76% growth rate that was seen in 2010.

However, even if the GDP per capita is high, that does not translate to higher living conditions of people at large. For instance, a country which spends heavily on military might have a high GDP per capita, but whether that kind of investment translates into better wages and living conditions for it’s people is a completely different question. This brings us to the question of income inequality – this so-called national wealth, how evenly is it distributed?

According to the ‘World Inequality Report’ published by renowned economists Thomas Piketty and Lucas Chancel, income inequality in India is the highest now, since 1922. In an interview given to The Hindu, Chancel remarks, “The top 1% of earners captured less than 21% of total income in the late 1930s, before dropping to 6% in the early 1980s and rising to 22% today. Over the 1951-1980 period, the bottom 50% group captured 28% of total growth and incomes of this group grew faster than the average, while the top 0.1% incomes decreased. Over the 1980-2014 period, the situation was reversed; the top 0.1% of earners captured a higher share of total growth than the bottom 50% (12% versus 11%).”

Thus, in the case of the Indian economy, the increase in the GDP has hardly meant any share for the 99% people in the country, though, these are the people who, as farmers, workers, daily-wage earners and service providers, produced this ‘Domestic Product’ that Mr. Modi is drumming about.

In his speech then, the PM went on to say, “Our macro-economic fundamentals are strong with stable prices, a robust external sector and a fiscal situation firmly in control. Despite rising oil prices, inflation is within the mandated range. The Government is firmly committed to the path of fiscal consolidation.”

In the real world however, India’s current account deficit – the deficit in international trade, plus other factors such as foreign remittances, rents, etc. – was positive around the time Mr. Modi assumed office. In other words, we had a trade surplus. Now however, the deficit is close to the maximum in the past 4 years.

We also need to remember that these 4 years was a period when the US interest rates were extremely low, almost close to zero, which means we owed less amount of interest to the US economy. This, and the fact that the global oil prices were low as well.

Coming back to Mr. Modi, he goes on to say in his speech, “The external sector remains robust. Our foreign exchange reserves of more than 400 billion US dollars provide us enough cushion. Global confidence in India’s economy is rising. Total FDI flows have increased steadily – more than 222 billion US dollars have been received in the last four years. As per UNCTAD’s World Investment Report, India continues to be one of the top FDI destinations in the world.”

Again in reality, “Foreign direct investment (FDI) to India in 2017 declined in line with global trend, while outflows from India, the main source of investment in South Asia, more than doubled, according to a new trade report by the UN.” The same World Bank report goes on further to say, “FDI to India decreased from $44 billion in 2016 to $40 billion in 2017. But outflows from India, the main source of FDI in South Asia, more than doubled to $11 billion”. Foreign Direct Investments are no guarantees for the economy’s well being, and they come and go according to global economic political conditions, but the point here is that Mr. Modi’s claims are not factually correct.

To close off his reporting on the economy, Mr. Modi claimed, “India’s per capita income has doubled in the last ten years.” Again, this claim, although factually not incorrect per se, is nothing more than a sleight of hand. On the one hand, while rise in per capita income has meant almost nothing for the Indian poor, as is clear from the income inequality figures, but even otherwise, below are the charts of per capita income, globally, and in India.

From the above graph, it is clear that in fact in the UPA I and II regimes, the per capita income in India increased by more than two-fold. While this did not mean in the least that the poor in India got a square meal a day by and large, neither does it anything like that under Mr. Modi as well. In fact, according to the World Bank’s “Ease of Doing Business” document released in 2017, per capita income growth rate of India is higher only than that of Sri Lanka, among the South Asian neighbours. 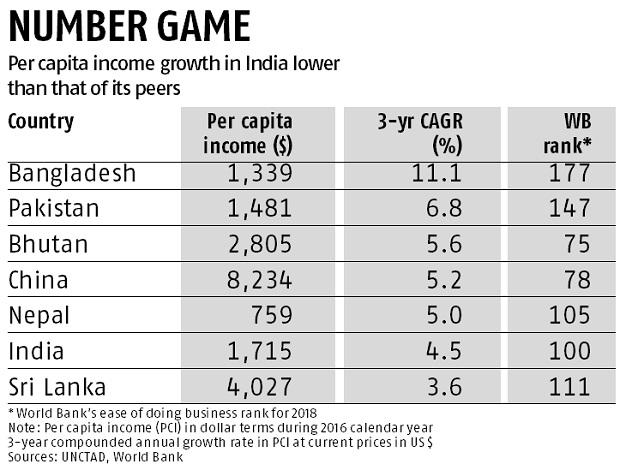 The above was a brief scrutiny of the PM’s recent claims about the economy, based on what he said. But the story remains incomplete unless we also pay attention to what he did not say in his speech. We will attempt doing that in an upcoming post.