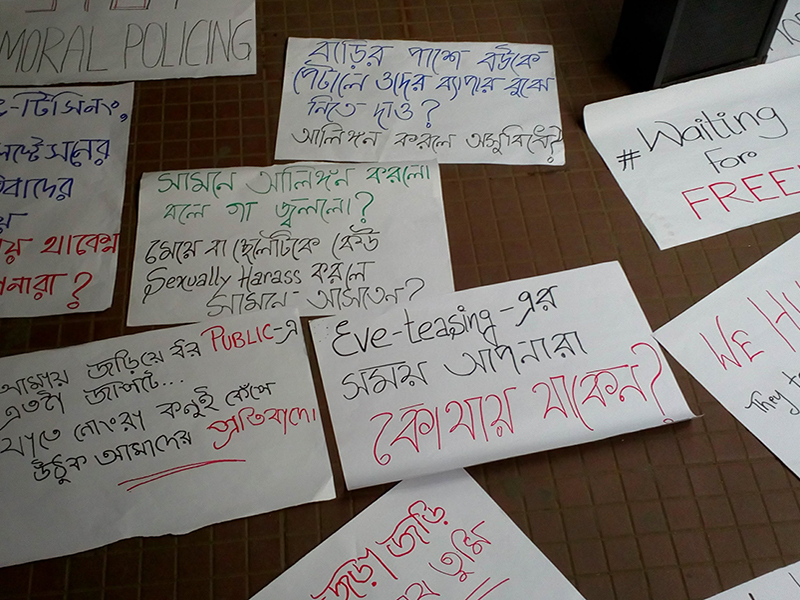 Almost 250 people gathered raising their voices against the Dumdum Metro moral policing incident, on a Facebook call by the event hosts of #waitingforfreedom. Protests continue in the face of further attempts of harassment and lack of cooperation of the Police.

The incident of a couple becoming the victim of moral policing had surfaced in the news on 1st May, 2018. Interestingly, a journalist was its eye-witness, thus possibly explaining the pace with which it was reported.

A brief run-down of the events: On 30th April, continuously taunted on the way, when the metro arrived at Dumdum, the couple was dragged onto the station by a crowd of 30-40 people. Apparently, they had been hugging each other while on the metro, which seemed offensive to a senior traveller. The offended traveller kept on throwing comments towards them, to which the guy, in the couple, soberly replied to. However, things gradually heated up and the other travellers started shouting on the guy, asking him to stay within his limits and finally this entire ruckus turned into a violent action scene. 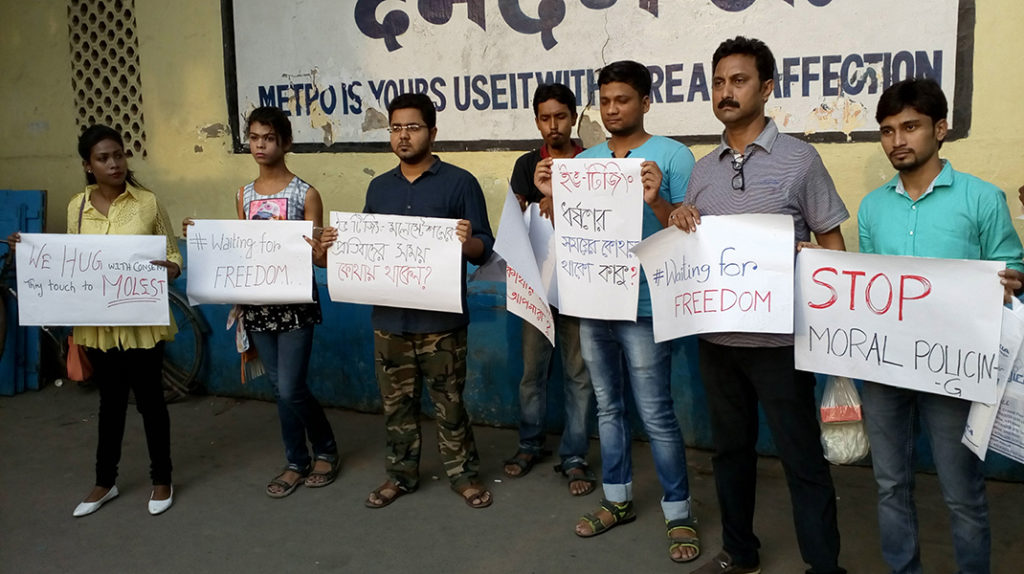 Crowds of people gathered around the evening of 1st May, protesting against the attitude of the harassers, on a Facebook call by the event hosts of Waiting For Freedom under the hashtag #waitingforfreedom. Almost 250 people gathered at Dumdum station, raising their voices in anger against such intolerant attitude of a certain section of people. Slogans and speeches kept on asking the question about the presence of such ‘moral protectors’ during the times of eve-teasing, rape or domestic violence cases. Protests were lodged in different ways throughout Kolkata by different groups of people. Some filed a deputation attached with the signatures of almost 200 people, some offered free hugs as a symbol of registering their protest, while still others decided to hold a symbolic cultural convention.

What happened right after the protest on 1st May was that several people started expressing their opinions on this issue. Some came entirely in support of the protesters whereas others said there should be a boundary to romantic or sexual expressions in public places, but at the same time, they are not in support of the hooliganism. Still others came up in support of whatever happened, claiming it to be the right thing to do. Facebook users took this uproar to the next level, trying to identify the harassers on Facebook and asking everyone in their circle to report those profiles as a way of letting them know that their actions were wrong.

Again, during a cultural protest arranged on 3rd May, at the same location, one person from the audience shouted in support of the harassers. To that, 3 of the protesters asked him to come up front and express his opinion openly. However, he refused to do that, and during the interaction with the protesters, he tried to push and touch their body parts to drive them away. Noticing this, some of the other protesters came charging for the guy who ran to save himself, 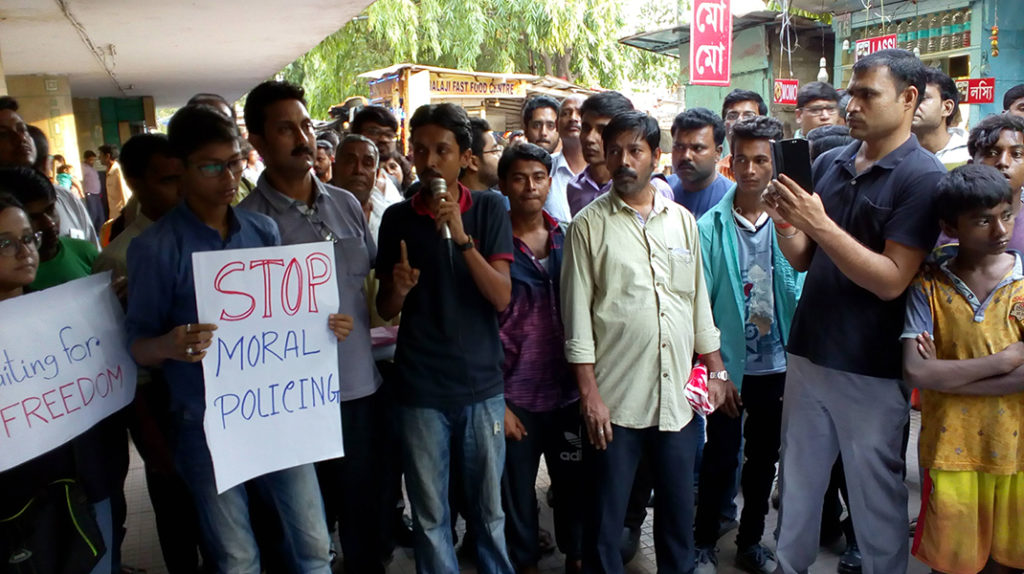 in turn getting safely removed from the area by the railway police force. The affected protesters decided to file FIRs in the Sinthi Police Station regarding their harassment, but faced an adamant, unfriendly police officer in return. The police officer refused to file an FIR until everyone present in his station provide their personal details to him. With their anger swooning high enough due to the harassment they had already faced, all who had gathered started a sit-in protest against the unprofessional attitude of the police officers and decided not to leave until the FIR has been lodged. The police succumbed to their demand around 3am, when the sit-in ended, and the protesters dispersed. Unfortunately, this interaction with the police stands as a proof as to how the State is hardly a neutral institution. The police, being the face of the State’s face of the “protective” initiative, has, in India, historically upheld the same regressive sexual and gender ideology as the conservative sections of the society.

The next day, an initiative was taken by the members of the Waiting For Freedom group, to visit one of the victims of social media lynching that had happened due to the process of identifying the harassers through Facebook. The victim had deactivated his Facebook account because of the problematic comments thrown towards him. When the team visited, he clarified that he was not one of them and that all this was just a misconception. The team apologized on behalf of the taggers and offered a rose as a symbol of reconciliation. Later in the night, this victim reopened his Facebook account.

This kind of mentality, as per my observations, originates from the thought of self-certification about one’s own idea of morality to be the best for every living person around. This attitude refuses to be open-minded and accepting about other people’s thought processes and tries to impose its own restrictions upon everyone who does not comply. To be sure, the concept of intimacy and its display is not a very simple topic to deal with. Different people might have different concepts about private and public display of affection, but no one should have the right to impose any single definition of how intimacy is to be performed on anyone.

A violent reaction in this context, therefore, is definitely condemnable. It is often observed that the very people, who raise objections about intimate couples in public places, do not stand up to prevent eve-teasing or domestic violence when it happens in front of them. This also possibly happens to be the same people who think rapes happen because of the clothing choices of the victims. 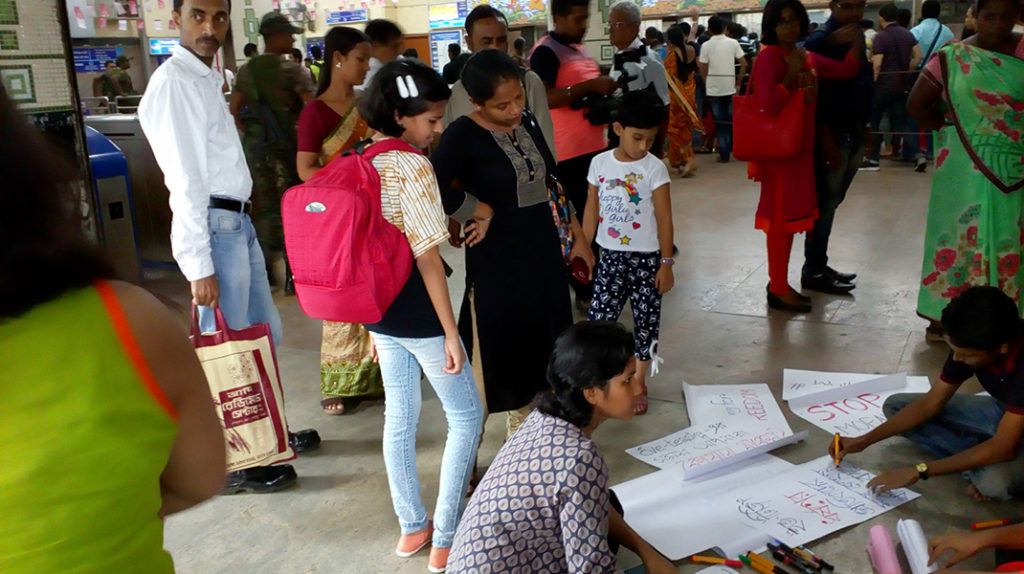 Secondly, pointing out a whole age group as the primary culprits of this harassment is not acceptable either. Because, that breeds in the problem of stereotyping, and encourages toxic ageism.  I, for one, can vouch for the fact that this conservative frame of mind mentality resides among the people of younger age groups as well. Instead, the problem needs to be attended sociologically. The solution to this cannot be reverse intolerance but an active awareness campaign that will make the conservatives realise that such matters should not be tackled violently. It is definitely not possible to check everyone’s thought process every single day, but an active campaign in favour of making people realise the importance of respecting one’s privacy might stand out as a step towards social change.

Indeed, the incident needs to be seen within a larger context of the everyday moral policing that women are subjected to. Whether the question  is about her sexual or her intellectual subjectivity, an opinionated woman tends to raise eyebrows. From questioning a group of office women roaming late at night to harassing women because of smoking in public, a woman’s presence within public spaces often creates a sense of anxiety within the dominant society. Is it that anxiety that led to this violent outburst inside the metro?

Additionally, trying to find out profiles on Facebook and identifying them as possible culprits is not a very desirable process. Intolerance cannot be fought with intolerance and further moral policing. There needs to be a valid process of investigation and before that no one should be harassed just because they seem to look like a certain culprit. Neither would creating false stories solve anything.

Last but not the least, it is not that Kolkata has been completely bereft of cultures of sexual shaming and moral policing. Yet, one wonders, to what extent has this lynch-mob mentality been emboldened by the emergence and consolidation of the Sanghi Hindu-right politics in the recent times. One needs to ask, to what extent did the right-wing Hindutva principles, with its prominent emphasis on controlling female sexuality and regressive gender ideology, empowers the conservative section of the people to perform its rage openly out in the public.

Rimjhim Sinha is a student-activist.