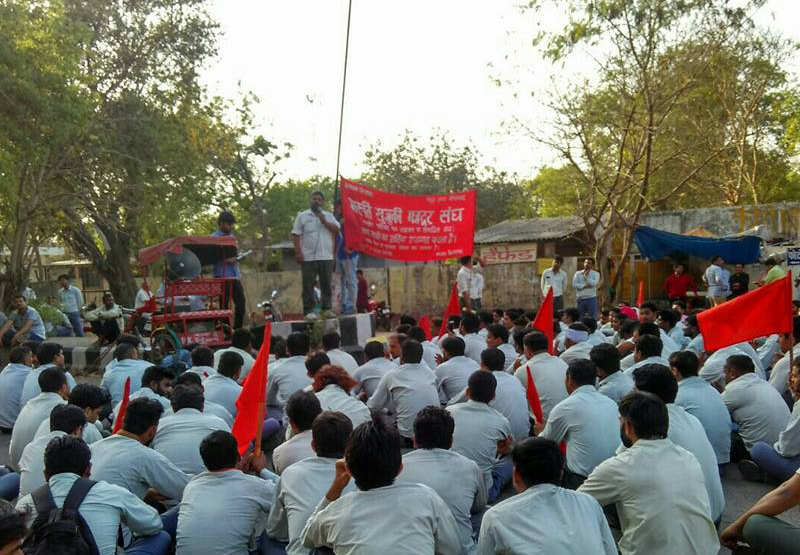 For Us, Everyday is May Day: Thirteen Days in June in Manesar

On June 4, 2011 Maruti workers at the Manesar plant started a strike demanding the formation and recognition of a new union. Here in the Manesar-Gurgaon region, workers may or may not know about May Divas. But if there is a day that preserves the spirit of the May Day here, it is June 4.

GroundXero Special Correspondent, New Delhi: In the history of labor movements, there has always been a tension between process and event. Processes are boring, tedious. Events are spectacular, blood-boiling in nature. This is especially true of events that exceed the brief moment of their occurrence, and become something else. For most of us who consider ourselves to be students of labor history and labor movements in some form or other, May Day is such an event. This is an event canonised by international left and labor histories to such an extent that the chronology of events that led to that fateful day in Chicago often appears hazy. Most of us in the left would not be able to talk in a meaningful way about the complex organizational histories that culminated in May Day. The process, by and large, has been lost from history. The event, though, remains.

I went to the Gurgaon-Manesar area with the explicit aim of finding out what significance May Day holds for current and former workers of the Maruti-Manesar plant. This is the same Manesar plant where the workers’ continuing agitation has brought the management to its knees, for sure, but it has also demonstrated the nexus between the judiciary and the Maruti management in a way that is almost singular within the history of the contemporary Indian labor movement. While much has been written about this nexus in the recent past, in this essay I will try to steer clear of that well-trodden terrain. Instead, my focus is small. A day, an event – how does it translate to Maruti workers today, across oceans and continents, is all what I wanted to know.

Yes, May Day is celebrated in Manesar. If you speak to workers about May Day celebrations, like I began to do, they will tell you about the meetings and rallies they had organized for the day, the slogans they had shouted. 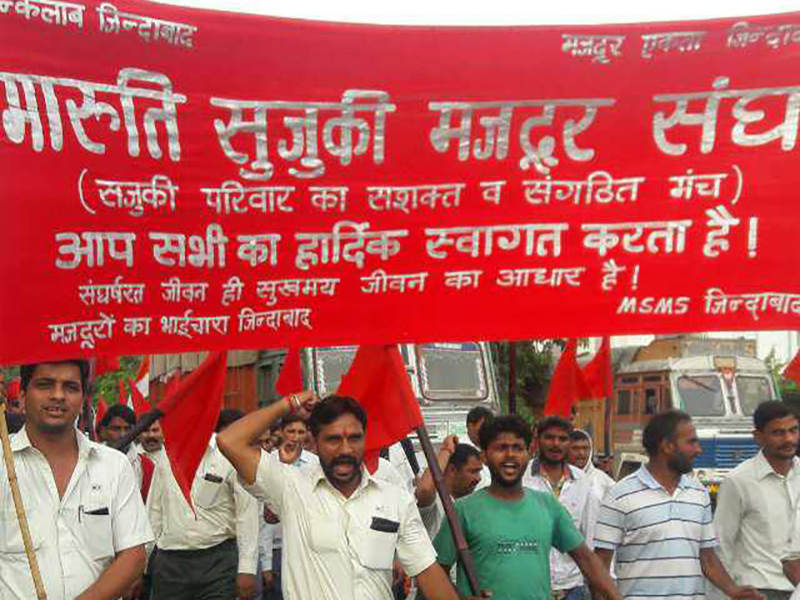 Yet listening to these anecdotes, you will realize these celebrations, as important as they are, have been relegated to the status of a ritual. A ritual of dissent, a left ritual — but a ritual nonetheless. For most of the Maruti workers, the annual May Day celebration is somewhere between an event and a process. It is an event because it is deeply ingrained within the left subcultures of the international workers’ movement, and thus demands a spectacular celebration. It is a process because it is also a chance for the Maruti workers’ union to integrate, to use the occasion for a deeper organizational cohesion.

Yet in the history of the Maruti workers’ struggle, there is a day that far exceeds any ritualistic celebrations or formally understood history of canonic days and dates. The day happens to be June 4. June 4, 2011, to be precise. Before this date, the workers will tell you, there was no precedent of celebrating May Day in Manesar.

It was on June 4, 2011 that the workers at the Manesar plant started a strike demanding the formation and recognition of a new union Maruti Suzuki Employees Union (MSEU). What the workers really wanted, was an union that would steer clear of the unions sponsored by established political parties. Neither did they want a management-approved union. What they wanted, and demanded, was an independent union, that would be committed to the workers’ struggles.

For any student of factory systems and labor histories, the events that led up to the strike were fairly unexceptional. The working conditions inside the Manesar plant were abysmal, even in comparison with those of neighboring companies such as Honda. The leave policies were hugely inadequate, the food served in the canteen was atrocious, the benefits package amounted to almost nothing. When probed a bit more, the workers talk about the everyday humiliation at the assembly line by the supervisors. They talk about the long working hours that did not even allow adequate bathroom breaks, smoking or snack breaks. After you listen to these stories for long enough, you will probably ask, whether we ever actually moved past the nineteenth century. Listening to these stories, you will wonder, if the production regimes of our neoliberal, multinational-driven era have really moved towards a reinstatement of the feudal. You will also probably begin to wonder about the very notion of rights. Do they even exist for the factory worker in our troubled times?

Alongside these stories – somewhat familiar – you will also hear the stories of the inefficacy and corruption of the management-sponsored union. “Management ka jeb rakkha hua union” (the union that stays in the pockets of the management), as the workers would describe it.

Difficult and complex as they are, these stories are not exceptional. But June 4 opens up a new story, a story of departure that also happens to be a story of collective nonconformity. Like most stories of collective nonconformity, the story of June 4, 2011 also follows a specific pattern. The initial fear, and the overcoming of fear. The heady feeling of something exceptional unraveling in front of our very eyes. And, ultimately, the excess of it all. The excess that cannot be accommodated within anything that we have known so far.

“Strike ka pehle sab ka man mein dar tha” (before the strike, everyone was afraid), says Narendra Biswal, a worker at the Manesar plant. “Everyone wanted an union, but no one wanted to come forward,” he continued. 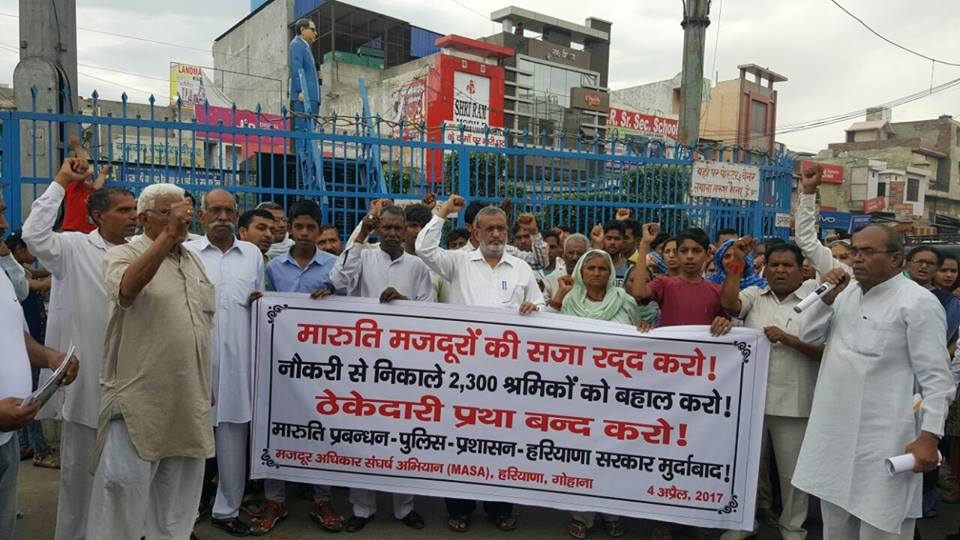 In other words, this could have been a mundane, familiar story of stalemate and fear – the fear of losing one’s job, the fear of increased repression on the part of the management. But the truth is, it didn’t.

It didn’t, because at 3.45 pm sharp, the workers of the A-shift stopped the machines. The strike had been declared, the slogans had begun to be chanted. “Buland awaaz thi”, says Khushiram, a terminated worker, in his effort to recount the details of the day. Khushiram is not alone. Speak to the workers today and most will tell recount how the sounds of their slogans reverberated throughout the factory. They will tell you how the voices of hundreds of workers chanting could be heard from outside – through the streets of Manesar. Yes, both inside the Maruti plant and outside, a new soundscape was created. A soundscape that exceeds the familiar soundscape of the factory – machines running, the screech and whine of assembly lines, workers coming and going. A soundscape whose electrifying effect has not ceased, even after decades of treachery by the middle-class leadership of the unions.

What created that fateful moment of 3.45 pm on June 4, 2011? Historians and sociologists will debate the causes and effects. What led to what. And that debate would be no idle exercise. But for “ordinary” workers like Narendra, the moment of the declaration of the strike remains far more important. That moment of standing one’s ground with others. That moment when he recognized “sabhi ka naukri khatre mein hain” (everyone’s job is in danger). And, because everyone‘s job is in danger, the danger itself can be looked at the eye.

Can we describe such instances as magic moments? Perhaps they are. But what that moment really and truly is, is a brief chronicle of nonconformist irrationality. A brief chronicle of how rationality – that biggest philosophical foundation of capital – is surpassed. Even if it is for the briefest of moments. Even if it is for a number of days you can literally count on your fingers.

It is known history that the Maruti strike continued for 13 days. That is a fact. But, that is also an event. Yet any effort to peel away the layers of that event reveals a tightly-knit web of countless other events and processes. The web is so tightly knit that the line between “process” and “event” is blurred. For example, within the “big” history of the event known as the thirteen days of the strike, the workers had spent two days without food. The management had blocked the entry of any outside food and water. Electricity and water had been cut off. When food was allowed to enter after those first two days, it was only two quintals of chana for around 3,000 workers.

Both Khushiram and Aazim, a worker still working at the Maruti plant, recall how it was decided that the lion’s share of those two quintals of chana would go to the contract workers, who should eat first. The contract workers, in turn, had refused, saying a strike demands that every worker eats at the same time.

Aazim reminds me that the space of the factory is not insulated from casteism, communalism or regionalism. “Bahar mein jo politics hain, wohi to andar mein bhi hoga” (the politics is the same inside as it is outside). Yet for each and every day of those thirteen days, he tells me, no one witnessed a single instance of casteism, communalism or regionalism. “Ekta” (unity) is the word he uses often to describe what happened during the thirteen days that followed June 4.

It not difficult for me or most students of labor history to know that workers’ movements and trade unions are complex formations. There is no space for wide-eyed optimism in labor struggles. Workers know this, too. Narendra issues the caveat, “Union banana asaan hain, lekin aage barana mushkil ho jata” (it is easier to build an union, but driving it forward is a much more difficult task), referring to the current struggles now that the union has been formed. He speaks about the complexity of the current legal struggles. pointing out that 13 workers “ko kurbani de gaye” (have been sacrificed). Yes, he was referring to the 13 workers who had been sentenced to life-imprisonment for demanding better working conditions and an organization. 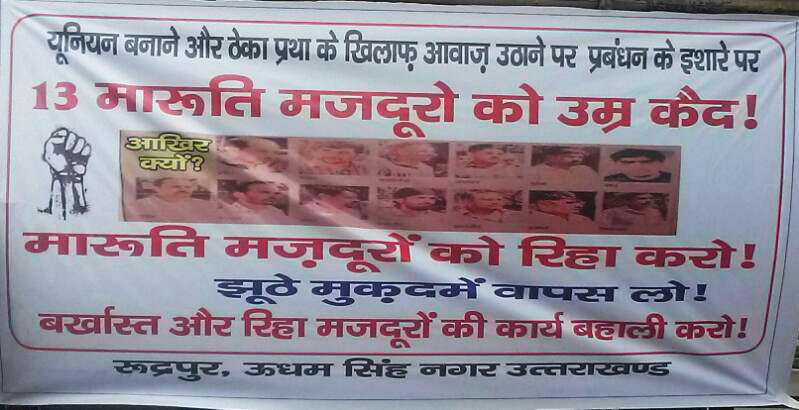 Yet the memories of June 4, 2011 circulate amongst workers, often in the form of folklore or legend. Here in the Manesar-Gurgaon region, workers may or may not know about May Divas. But if there is a day that preserves the spirit of the May Day here, it is June 4.