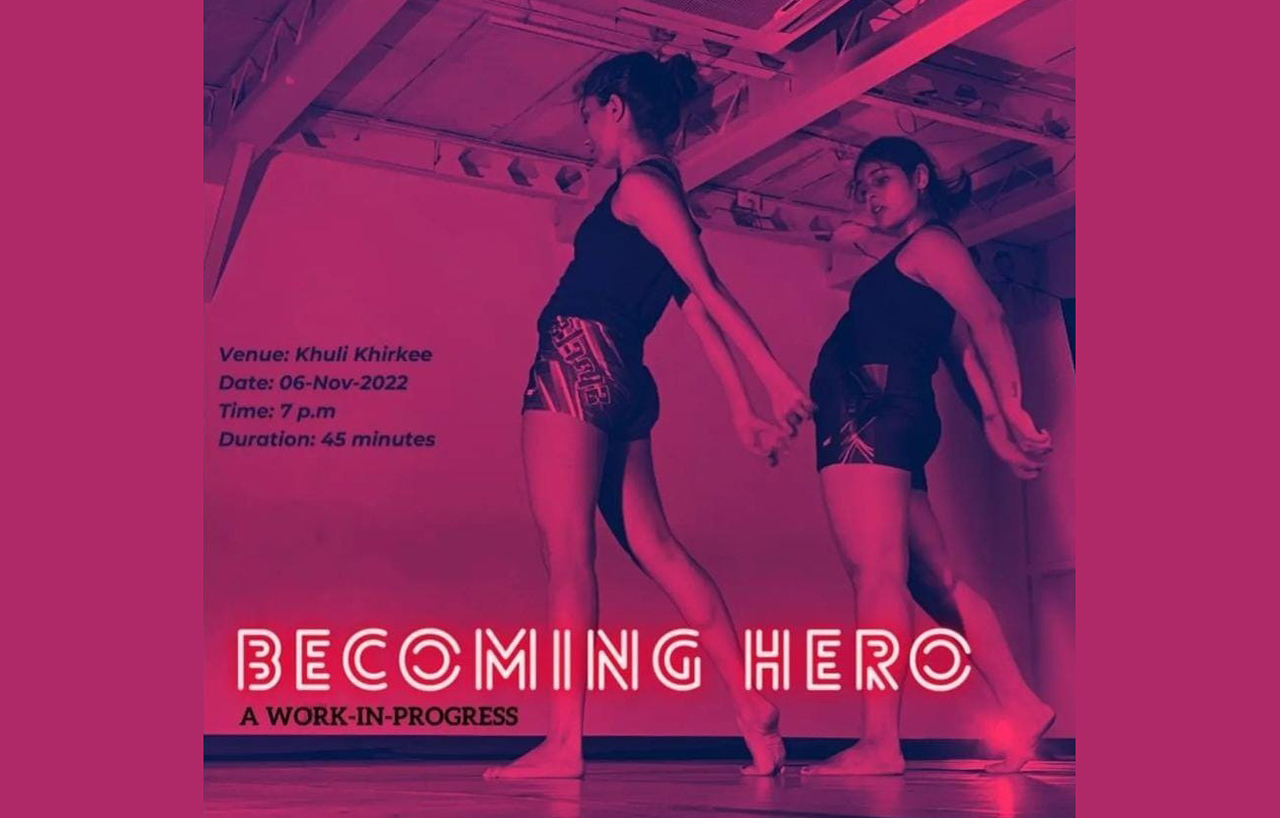 Ashley Tellis on a performance where women try on the male Hindi film dancing body.

‘Becoming Hero,’ a work-in-progress performed by Jasmine Yadav and Akanksha Kumari at Khuli Khirkee, Delhi’s premier dance studio and venue on Sunday, showcased the exciting work being done by Mandeep Raikhy who runs Khuli Khirkee (earlier Gati) and is not just one of the best contemporary Indian dancers but also nurtures talent in the form of fellowships and residencies to young performers. Indeed, ‘Becoming Hero’ was the result of one such fellowship.

‘Becoming Hero’ has two young women enter the bodies of the contemporary Hindi film hero through his dance moves. Given that both Yadav and Kumari are very young, their idea of cinema is really post-90s and their dance moves really begin with Govinda and Shahrukh Khan in the 90s and end with the pelvic pyrotechnics of the likes of Hrithik Roshan and Varun Dhawan. Their focus then is on one kind of male Hindi film body (muscular, toned, gym-made and fir) and one kind of dancing body (pelvic thrusts, pyrotechnics, aerobics, acrobatics).

Within this frame, Yadav and Kumari did a great job of showing the physical stress and strain of this dance, the focus on power and endurance and the phallic aggression of this masculinity. It also inevitably highlighted both the limited nature of this repertoire and the sheer absurdity of it, which became clear in the moments when there was no soundtrack and one only saw the thrusting bodies, the heavy breathing, the sweat and the pain that goes into this kind of dance.

This dance is influenced by global trends in male dance, club dance and music (even when they played earlier songs, Yadav and Kumari used re-mixes) and constitutes only one or at most three (the Govinda, the Shahrukh and the Hrithik/Varun) chapters in the history of men’s dance in Hindi cinema. This is but a sliver in the rich history of men’s bodies moving in Hindi cinema and hopefully, as the piece expands (it is a work-in-progress, as noted), they will bring in other chapters and other kinds of somatic responses to music in Hindi cinema. From Raj Kapoor’s Chplineque moves to Shammi Kapoor’s rubber doll antics; from Dharmendra and Sunny Deol’s plain and simple inability and near-refusal to dance (when they do, they are embarrassing) to Sanjay Dutt’s stiffness, from Dev Anand’s marionettish moves to Jeetendra’s bamboostick staccato jhatkas, there is so much to explore

Both Yadav and Kumari are deeply athletic and supple dancers (which seems to be the norm in contemporary dance much like it is the norm in contemporary Hindi cinema). This is remarkable to watch but gets monotonous and tiring after a while (much like most dance in contemporary Hindi cinema). Contemporary dance must learn to incorporate modes and moves from classical and other forms of dance and bring variety into the repertoire. If there is no difference between dance and aerobics anymore, we might as well shift to gyms to watch performances and that would be the death of, and for, a lot of us.

This particular performance, with its exclusive focus on contemporary Hindi cinema, of course, demanded it. It says more about the poverty of Hindi film masculinity and Hindi film dance more than anything else. The sound at the performance was scratchy and uneven, the lighting unimaginative.

The exciting part was that it was not actually performed by men (which would have been hideously boring) but by two women trying on the masculine body for size and seeing how they feel about it. Yadav spoke about how it opened her shoulders and chest (Indian women are usually hunched over and shielding their breasts from the lascivious Indian make gaze) and the volume between her hands and chest. Indian men’s phallic masculine dance moves became palatable only because these were women doing it, a sort of Judith Halberstamian female masculinity. Men have danced as women forever (male impersonator dancers go back centuries in various Indian dance forms) but women playing men have hardly had any outings.

Yadav and Kumari had fun and we had fun too, thinking along the way about how  utterly embarrassingly stupid Hindi film masculinity is and what women might and might not do with their bodies.