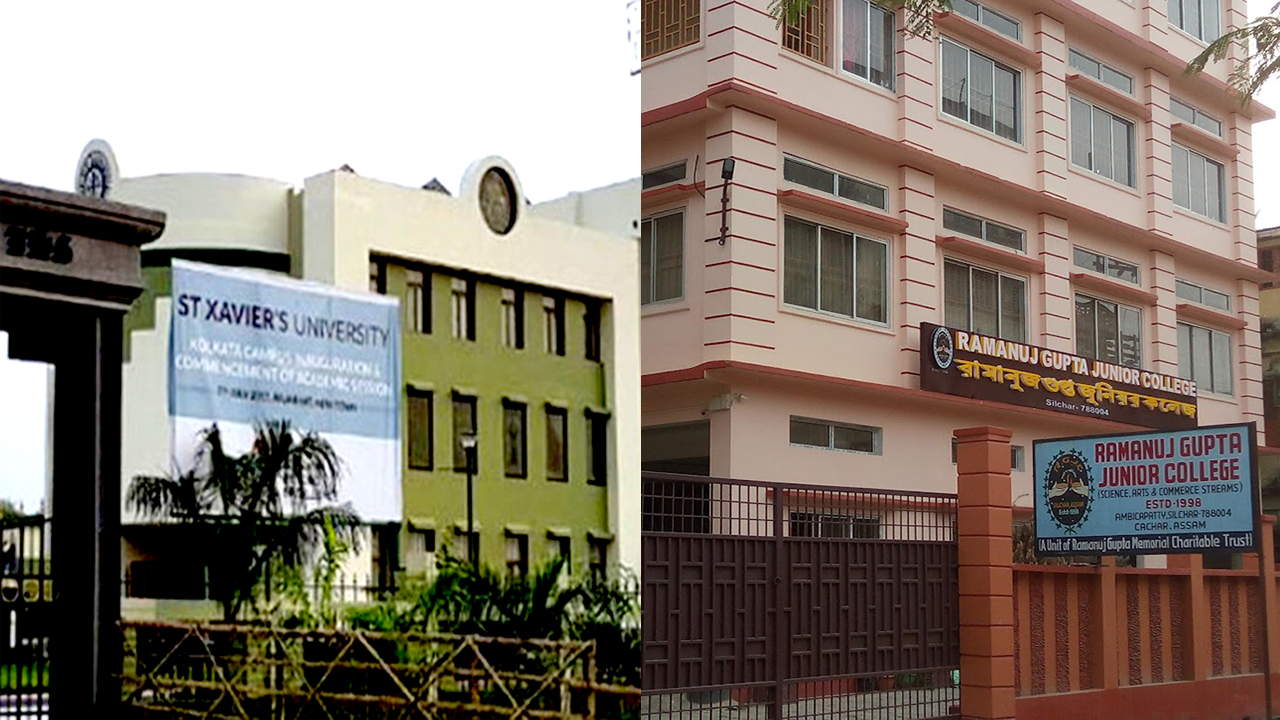 The Sickness in Us

The critique of recent cases like in St. Xavier’s University (Kolkata) and Ramanuj Gupta Junior College (Silchar, Assam) needs to be on multiple levels and it cannot be an issue of just moral policing or sexism. We need to reimagine educational spaces and institutions not as a ground to police people for being themselves, writes Riya Ray.

The recent event at St. Xavier’s University, Kolkata which has created a kerfuffle is not really about moral policing alone or sexism and misogyny alone. It is about the college and the university as authoritarian institutions and about the increasingly reactionary and vicious nature of parent/familial and student culture.

The middle-classes in India value discipline, obedience, and have an obsession with their “wards” getting the highest of marks and little else. If this were to involve bludgeoning them to death, parents would be okay with it. We as Indians do not care about students, teaching or learning at all. We value how much we can mould students into identical puppets and segregate them based on their scores (which is actually a failure of the teaching ecosystem, which we refuse to acknowledge).

Christian institutions with their authoritarian structure largely based on discipline and punishment are perfectly in line with what parents, guardians, and teachers want for students and anyone involved in the education ecosystem. The education models are not based on students learning and growing into adults; it is more about ways in which we can suppress the actions and thoughts of students and also those of teachers. There is the Christian ethic of punishment and self-punishment to this which, ironically enough, mostly Hindu parents accept quite happily. They encourage the abuse of their “wards.”

The current neglected case in Ramanuj Gupta Junior College, Silchar shows us how this Christian ethic has been internalised by educational institutions of all stripes. The breach of privacy and oppression of members of the institutions by the authorities aside, the active complicity of a section of conservative students is important to note in both cases.

While Kolkata is a metropolitan city and the event shocked us, the case from a small town in Assam went more or less unnoticed and with a lack of outrage from the liberals. Ramanuj Gupta Junior College, situated in Silchar (Assam) recently suspended seven students and they would most probably get expelled soon from this Junior College for being teenagers and expressing affection. These students were booked and punished for posting a video on Instagram, where they are seen hugging and holding each other, which the authorities described as moral turpitude. The videos went viral and the whole town came down on them criticising their behaviour on social media and how the school authority has not been sufficiently strict with them. There was no official complaint filed against the students, but the school authority, once aware of the videos, took it upon themselves to take action against the students. They circulated a notice stating the name of the seven students, and that they have “indulged in acts of turpitude. Such type of activities tantamount to gross violation of discipline of the institution” and hence they are to remain suspended indefinitely. They also further stated that CCTV cameras are present in classrooms along with the fact that phones will be banned from the school premises. Currently, as I write this article, there has been no further development on the case, parents of the said students, or the students have not challenged this suspension, which only points out how deeply we as a society also value Christian sense of puritanism and accept authoritarian forms of punishment.

While, on social media a handful of people pointed out about the absence of sex-education in schools and pointed out that authority is wrong is suspending and humiliating the students1, most of the news and media outlets have joined in in shaming the students and criticising the school for not being vigilant enough 2.

School authorities see their students expressing a hint of sexuality as being depraved. We, the middle class, also want to imagine anyone associated with education as being ‘pure’ and ‘asexual’ while ignoring the many cases of sexual harassment reported in educational institutions. But what is more disturbing is how students have internalised this conservatism. It was a student who reported the incident in the Xaviers University case; it is the students who are condemning as ‘immoral’ the actions of the Silchar students. Why are students becoming so conservative, reactionary, sick and judgemental even of themselves?

The forced resignation of the Assistant Professor at SXU, and the manner in which it was done show us that Christian institutions are acting much like khap panchayats that such ‘liberal’ spaces wouldn’t want to associate with or draw inspiration from but they end up acting similarly as evident in the methods they use to keep people in line.

The assistant professor was sacked/forced to resign because of her personal social media activities which are not part of her being an educator or related to her job profile. The parent of a ‘child’ claims that her pictures were almost nude which might have a negative impact on his ‘child’. The ‘child’ in question is a University student and yet under the complete control of his father, an eternal infant who is apparently mentally shattered after breaching the privacy of his professor. The committee to look into the case circulated the said images through the room and everyone examined the woman’s pictures in a swimsuit in front of her, which in my opinion should be considered sexual harassment by the St. Xavier’s authorities.

The VC of SXU said, “…the university always believes in preserving and maintaining the dignity and honour of all its teachers, staff members, students and others connected with it, past and present…” which positions itself as the authority to maintain the dignity and honour of its teachers, staff and students, while this statement in itself exposes the patriarchal, misogynistic mindset, echoing the khap panchayats who issue fatwas against inter-caste marriage.We must also consider, their humiliating treatment of the said teacher in this matter. St. Xavier called a meeting and circulated her picture to those present in it, scanning it for the level of dignity and honour that she has distrubed, which in my opinion, constitutes stripping the teacher of her dignity and honour. The prestige of such institutions are dependent on shaming and undignified treatment of the students and employees. The two cases are a testament to this behaviour.

This indeed is not the first or the only case of wrongful termination and sexual harassment coming out of such institutions. Most of these cases go unreported or the cases are withdrawn. In Bangalore, on 16th July 2013 a female student consumed poison after getting harassed by her NCC instructor but the case was withdrawn by her father as he thinks ‘it will leave a permanent mark in her daughter’s future’ as if the incident – the suicide attempt is not harming her in the worst possible way. But, at least, in the society she remains as untouched by the ‘stigma’ of sexual harassment by not demanding action against the authorities. Other cases are not even reported as was the case of a student raped by a priest in Christ University, Bangalore, which, more recently, came into news for a slew of sexual harassment cases. Jhatkaa.org eran a campaign on the issue.

Dr Ashley Tellis, an openly gay academic and activist, taught in St. Joseph’s College of Arts and Sciences, where he was forced to resign by the Principal (Fr. Victor Lobo) for doing his job, i.e. teaching students, making them think and critique authority, not to mention the raging homophobia of such institutions. As Dr. Tellis points out in his interview with Deccan Herald, him being gay was mentioned in his CV and that his personal informs the political, which is what they gave as a reason for him being fired3. Even the authorities while speaking about Ashley Tellis to the press pointed out that he was not mindful of the sensitivities of his students, which in my understanding was a passing remark to his politics and teaching method that comes from being an openly gay research scholar 4. They gave the appointment to Dr Tellis for his undeniable qualifications and merit but were deeply uncomfortable by his presence in the premises and classrooms which are built on making students follow and not think and question, hence marking the classrooms devoid of any independent critique of prevalent norms and dissent against them.

Such wrongful termination violates numerous labour laws which these institutions do not care about because we as middle-class populations are in love with fascist authority, which is also the nature of family as an institution, as Virginia Woolf pointed out years ago in Three Guineas. There are numerous cases of abuse – rapes, molestation, and sexual harassment by family members – majority of which go unreported. So why should we expect anything different from church authorities of educational Institutions?

Therefore, the critique of such cases needs to be on multiple levels and it cannot be an issue of just moral policing or sexism. We need to reimagine educational spaces and institutions which are focused on students, their right to education, socialising, sex, and not as a ground to police people for being themselves. Not least because students themselves need to get rid of the regressive ideas their parents and the authorities of their educational institutions have put in their heads.

( Riya Ray is an independent researcher based in Silchar, Assam. She is currently engaged in translation work on the NRC-CAA victims in Barak Valley.)